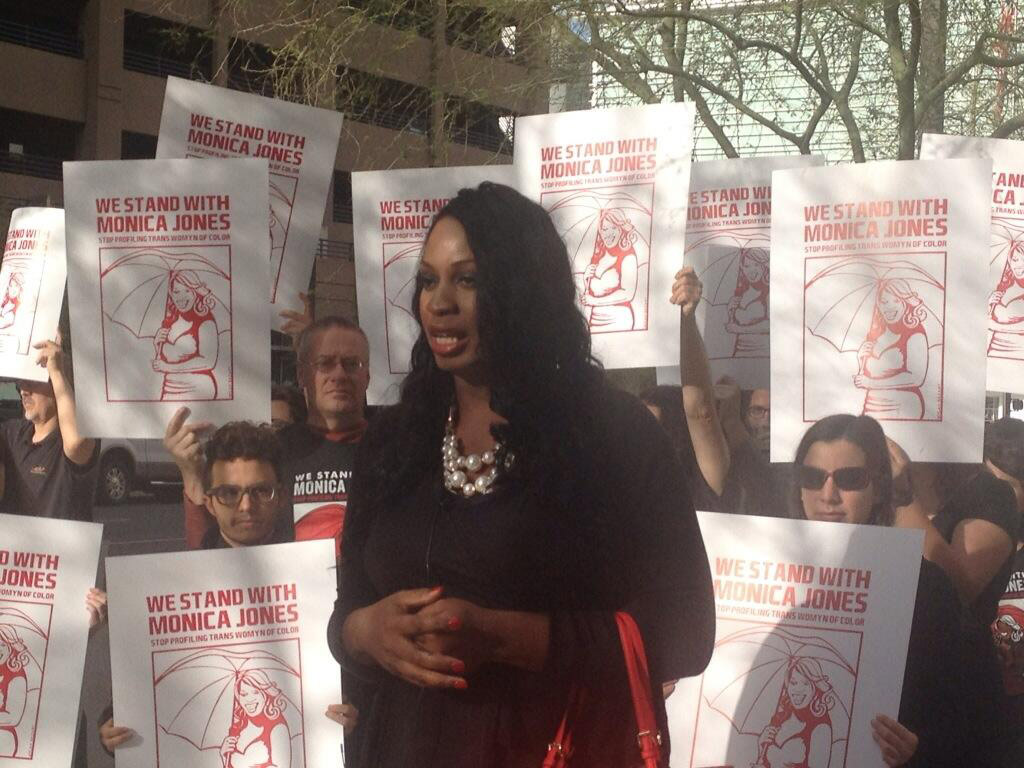 Monica Jones speaking at a press conference before her trial in Phoenix, Arizona, March 14 (Courtesy: @SWOPPhx/Twitter)

I’m a New York–based writer and student of history. For The Nation, I’ll be blogging about labor and human rights struggles inside and outside US borders, in the context of the global economy and transnational social movements. Bookmark my blog for new posts multiple times a week.

Arizona has a long record of going against the current of history, from its rejection of Martin Luther King Jr. Day to its vicious anti-immigrant crackdowns and opposition to LGBT rights. Today the state is at the center of a global debate on the politics of policing the sex industry. The case of Monica Jones, a transgender former sex worker in Phoenix who has been swept up in a harsh anti-prostitution campaign, has set off a wave of outrage, stretching from a local court—where her trial has been delayed pending a constitutional challenge—to Geneva, where her story has reached the world’s preeminent human rights body.

Jones’s plight began last May when she was accosted on the street and apprehended by an undercover officer for allegedly “manifesting prostitution.” Jones, a local rights activist and university student, was one of hundreds who have been ensnared in recent years by Arizona’s flagship anti-prostitution campaign, Project ROSE (Reaching Out on Sexual Exploitation). The program encourages cops to investigate anything that suggests the intent to sell sex, ranging from a conversation on the street to a suggestive “bodily gesture.” Given the vagueness of the “manifestation” definition, police tend to focus on the more convenient suspects: the poor, LGBTQ and gender non-conforming people, immigrants and people of color. Once suspects are detained, the program attempts to rehabilitate them through a blend of criminalization—the threat of jail—and social programs that, under the guidance of Catholic Charities, pushes participants to redeem themselves by leaving the trade.

This carrot-and-hammer approach reflects the legal framework of anti-trafficking policy nationwide. Though these policies are intended to stop forced and coerced sex work, they’ve fueled by harsh, often dehumanizing police tactics, as officers indiscriminately round up suspected sex workers on the street, raid suspected brothels and criminalize nearly anything that smacks of sex for pay, voluntary or involuntary.

While Jones has chosen to fight the law in Phoenix, advocates with the Best Practices Policy Project (BPPP) and Sex Workers Outreach Project-Phoenix (SWOP-PHX) have gone to the United Nations to condemn Project ROSE and similar anti–sex worker policies. Petitioning before the UN Human Rights Committee last Monday, they criticized such programs as violations of the International Covenant on Civil and Political Rights (ICCPR), a global framework that guarantees self determination, equality before the law and freedom from discrimination on the basis of race, gender, or sexual orientation.

The petition describes the insidious social consequences of punitive anti-trafficking policies. In addition to targeting marginalized groups with oppressive policing, the petition states, US police “draw on patriarchal presumptions of immorality in profiling people based on such things as the clothing they wear.” Steeped in reactionary notions of sexuality and gender, such policies also fail to consider the core labor rights of people engaged in consensual sex as a job.

The groups noted that the legal penalties imposed on sex workers, which may result in a felony conviction and months of imprisonment, lead to other social barriers that come with criminal convictions—including future employment discrimination—and ultimately alienates them from social services while further exposing them to exploitation and violence. Navigating the legal process, moreover, is wrenchingly difficult for people already facing deep stigma and deprived of decent legal counsel, which in turn undermines basic due process rights.

Darby Hickey of the BPPP tells The Nation via e-mail, “We chose to highlight what has been happening in Phoenix because it is emblematic of the rights violations that happen around the country—and to a certain extent around the world—under criminalization of sex work.” The criminalization of Jones, as a black trans woman, Hickey adds, demonstrates “how anti-prostitution laws are used to police who is a ‘legitimate’ person who can enjoy public space.”

Although advocates for sex workers’ rights are fiercely opposed to any forced sex work, they say Project ROSE ends up hurting rather than saving participants. The diversion program, known as DIGNITY, runs an estimated 70 percent failure rate, and most accused sex workers have typically found it to be anything but dignifying.

In a recent interview with Truthout, Jones recalled her earlier experience with the diversion program after a run-in with police in 2008:

They treat you as like just a thing. Like [because] you’re a prostitute, this is what’s wrong with you. This is what you need to be doing. And like for me, I’m proud to be a sex worker. I’m not on drugs. I’m not like one of these crazy people. I just needed to make money for school.

Speaking from Geneva last week, Jaclyn Dairman of SWOP-PHX told The Nation, Project ROSE enables local police to “just view everybody as a victim of trafficking, and use coercion to fight coercion, basically.”

The petition calls on the United States to decriminalize sex work, repeal laws and federal directives that “undermine protection and respect for the human rights” of people in the sex work sector, and “[e]nsure that all prisoners, including those arrested for sex work and sex work-related offenses, are protected from torture, and cruel, inhuman and degrading treatment.” (This would bring US policies on sex work more in line with countries that have moved toward decriminalization or legalization of sex work, such as Germany and New Zealand.)

The US government, of course, is notorious for flouting international human rights law (the other perennial issues activists raised at the ICCPR session included government spying and the death penalty). But there are signs that attitudes in Washington are shifting under international pressure. After a groundbreaking testimony in 2010 before the UN Human Rights Council on US sex workers’ rights—and months of vigorous campaigning by sex workers’ rights advocates—federal authorities declared in 2011 that “no one should face violence or discrimination in access to public services based on sexual orientation or their status as a person in prostitution.” While this, so far, has not led directly to any changes to domestic anti-prostitution policies, Washington has at least affirmed one foundational principle of harm reduction: whatever the law says, no one involved in sex work should be denied vital services or essential rights.

Still, evidence of systematic violations of these principles has surfaced across the country. In New York City, for example, police have reportedly used the possession of condoms as a pretext for rounding up suspected sex workers.

And back in Phoenix, Jones hopes the message aired in Geneva will press the courts to rethink its treatment of sex work. In an interview with A Kiss for Gabriela, Jones urged her supporters to “come out in force” when her trial resumes on April 11, and remarked that the legal landscape in Phoenix might already be shifting. Usually in cases like hers, she said, “the defendant… pleads guilty because they have no real option for justice. So people are forced through the system with no one to help them,” adding that, “my ongoing case is bringing to light this injustice.”

With its history of imposing shame on sex workers under international scrutiny, the moral crusaders in Phoenix might soon find themselves with something to be ashamed of on the world stage.

Editor’s note: This article has been updated to clarify Jones’s status as a former sex worker and current activist.