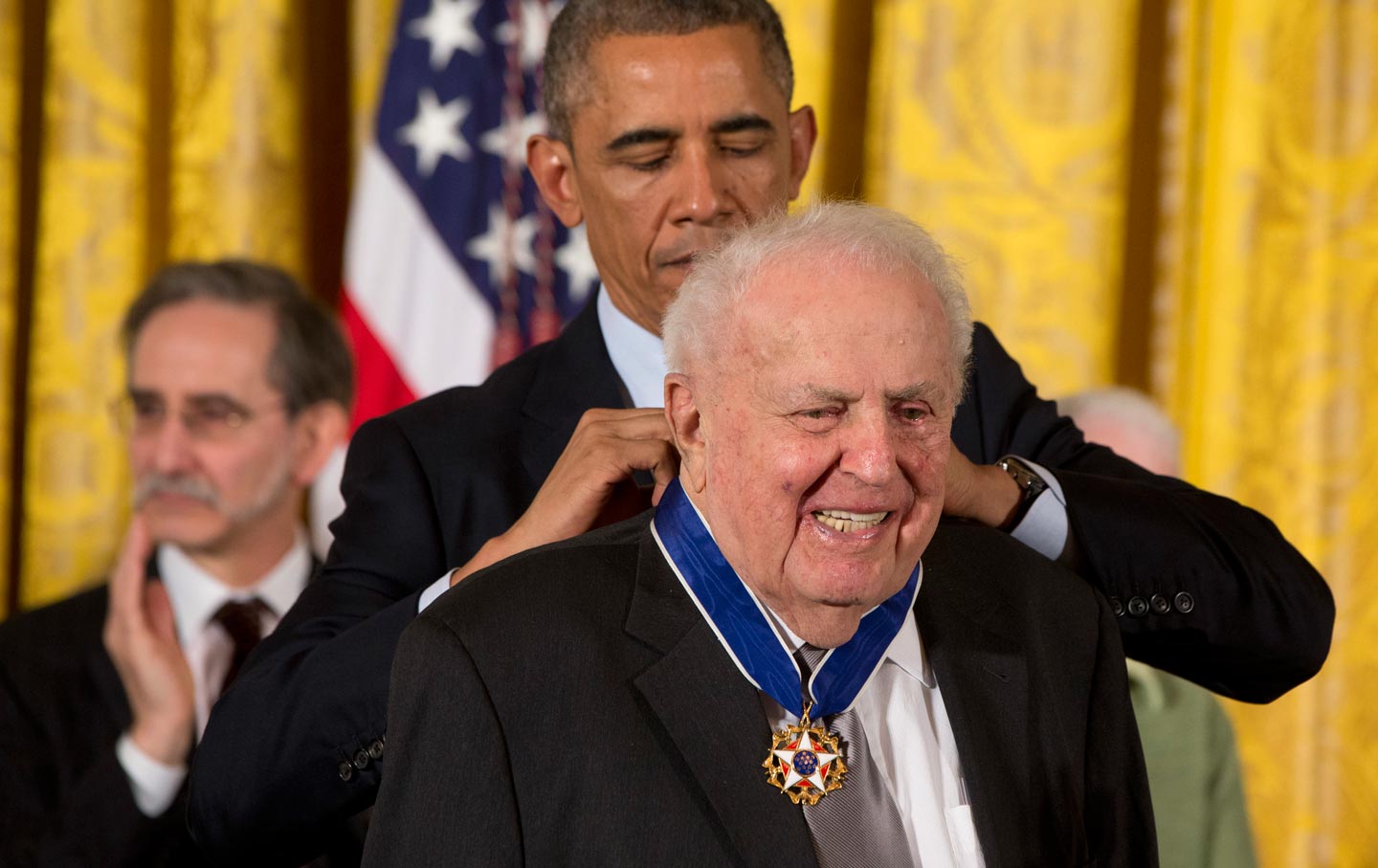 On a lovely late-summer night in 2008, Abner Mikva and I stood with Congresswoman Jan Schakowsky in front of an elaborate stage that had been erected at Denver’s Mile High Stadium. In a few minutes, they would join a boisterous crowd of Illinois Democrats who had come to cheer for the young lawyer and legislator Mikva had mentored across many long and sometimes difficult years of personal and political progress.

Mikva was overjoyed. He would have been willing to sit in any seat in the stadium in order to celebrate the nomination of Barack Obama for the presidency. But, as anyone who knows anything about the remarkable relationship between these two men will tell you, Obama wanted Mikva close to him in moments of struggle and triumph.

Mikva, the great reformer and civil libertarian who died Monday at age 90, was among the first prominent figures in Chicago to recognize the potential of the young Harvard Law School graduate who settled in the city and began to forge a political career in the 1990s. When Obama presented Mikva with the Medal of Freedom in 2014, the president said, “He inspired the next generation, including me.”

President Obama hails Abner Mikva as the mentor who gave him “those first, firm pushes at the start.”

The inspiration was mutual.

Before Barack Obama was born, Abner Mikva was fighting to forge a politics in which an Obama presidency might be possible. A native of Milwaukee, born when the city was governed by Socialist Mayor Dan Hoan, Mikva was the son of Jewish immigrants who spoke Yiddish at home. The family lived on relief during the Depression, and Mikva—who trained for the Army Air Corps during World War II—went to college on the GI Bill. He ended up at the University of Chicago Law School and was drawn to politics. But the Democratic machine was not interested.

“As a University of Chicago student, Abner Mikva stopped by the local Democratic headquarters and asked to volunteer. I love this story,” recalled Obama. “A committeeman asked, ‘Who sent you?’ And Ab said, ‘Nobody.’ And the committeeman said, ‘We don’t want nobody nobody sent.’ That’s Chicago for you,” President Obama recalled several years ago. “Despite that abrupt dismissal, Ab went on to devote his life to public service—reformed Illinois’s criminal code, defended free speech and consumer rights; in 1993, struck down the Pentagon’s ban on gays in the military. He was overturned on that one—but history proved him right.”

History always proved Mikva right—on the issues and when it came to the younger political figures, such as Obama, Schakowsky, and Supreme Court Justice Elena Kagan, whom he mentored.

The vindication did not always come quickly, or easily, for Mikva. He took on the Chicago machine and won a seat in the Illinois legislature in 1956, where he emerged as a champion of civil rights and civil liberties. But when he sought to take his passion for social justice to Washington in 1966, he was beaten in a Democratic primary. Two years later, Mikva secured the Chicago seat as one of the first of the wave of anti–Vietnam War progressives who would remake the Democratic Party and Congress. Machine Democrats and Republicans redrew Mikva’s district so that he could not win in the city. So he moved to the suburbs and won a new seat in the Watergate election of 1974—serving until President Jimmy Carter appointed him to the Court of Appeals for the DC Circuit in 1979.

Mikva, who would eventually serve as chief judge on the powerful federal bench, defended consumer protections (seeing off industry challenges to air bags in automobiles, for instance), and championed an expansive view of civil rights in his historic decision to strike down the Pentagon ban on military service by LGBTQ Americans. In another time, Mikva might have been appointed to the US Supreme Court, but, in a measure of his broad passion for public service, he instead left the court of appeals to become White House counsel during the critical period in 1995 when President Bill Clinton was wrangling with House Speaker Newt Gingrich.

After he returned to the University of Chicago Law School, as a lecturer and senior director of the Mandel Legal Aid Clinic, his relationship with Obama flourished. Years earlier, when Mikva was still serving on the federal bench, he had tried to hire Obama as a law clerk. But, recalled Mikva, “Word came back he was going to run for office. I didn’t know he had any previous experience in Illinois. And I thought, ‘Boy, has he got a lot to learn. You just don’t go back to Chicago and plant your flag.’”

But, of course, Mikva had planted his own flag in Chicago as a young reformer. He delighted in Obama’s bid for an Illinois legislative seat in 1996. And the man who Illinois Senator Dick Durbin referred to as a “North Star for integrity, independence and progressive values” continued to mentor Obama as a legislator and Senate candidate. The two men would sit for hours in an office on the University of Chicago campus, talking law and politics. When Obama lost a 2000 Democratic primary for a US House seat, Mikva recalled his own defeats—and the victories that followed—urging the young man to keep pursuing public service.

Mikva cherished Obama’s success—and supported it, as an ardent advocate for the president’s judicial nominees, including Justice Kagan and Judge Merrick Garland. The president, in turn, cherished the advice and counsel of a man he came to trust at the deepest level.

The story came full circle Tuesday morning, when Obama issued a heartfelt tribute to one of a great America battlers for social and economic justice who was, as well, a great friend to the president:

No matter how far we go in life, we owe a profound debt of gratitude to those who gave us those first, firm pushes at the start. For me, one of those people was Ab Mikva. When I was graduating law school, Ab encouraged me to pursue public service. He saw something in me that I didn’t yet see in myself, but I know why he did it—Ab represented the best of public service himself and he believed in empowering the next generation of young people to shape our country. Ab’s life was a testament to that truth. Six decades ago, when he first tried to volunteer in Democratic politics, the Chicago political machine told him that they “don’t want nobody nobody sent.” Ab didn’t take no for an answer because he knew that in America, in our democracy, everybody can be somebody—everybody matters.

That conviction led Ab—a son of immigrants and a World War II veteran—to serve Illinois as a state legislator and serve our nation in every branch of government—as a congressman, federal judge, and White House counsel. In every position he held, Ab’s integrity and wisdom consistently put him on the right side of history, from fighting against prejudice and discrimination and for free speech and civil liberties. He reformed Illinois’s criminal code, defended consumers’ rights, and although his decision striking down the ban on gay Americans serving in our military was overturned, history proved him right.

Like so many admirers, I’ve lost a mentor and a friend. But as we mourn his passing, I’m comforted by the thought that countless Americans will continue fighting for progressive causes Ab believed in because he pushed them toward public service, both during his time in government and through Mikva Challenge, which he established with his wonderful wife, Zoe. We’re all better off because we were sent Ab Mikva, and because Ab in turn sent us forward to do big things. Michelle and I send our deepest condolences to Zoe, their three daughters, seven grandchildren, and the generations of young patriots Ab inspired. May his memory be for a blessing.