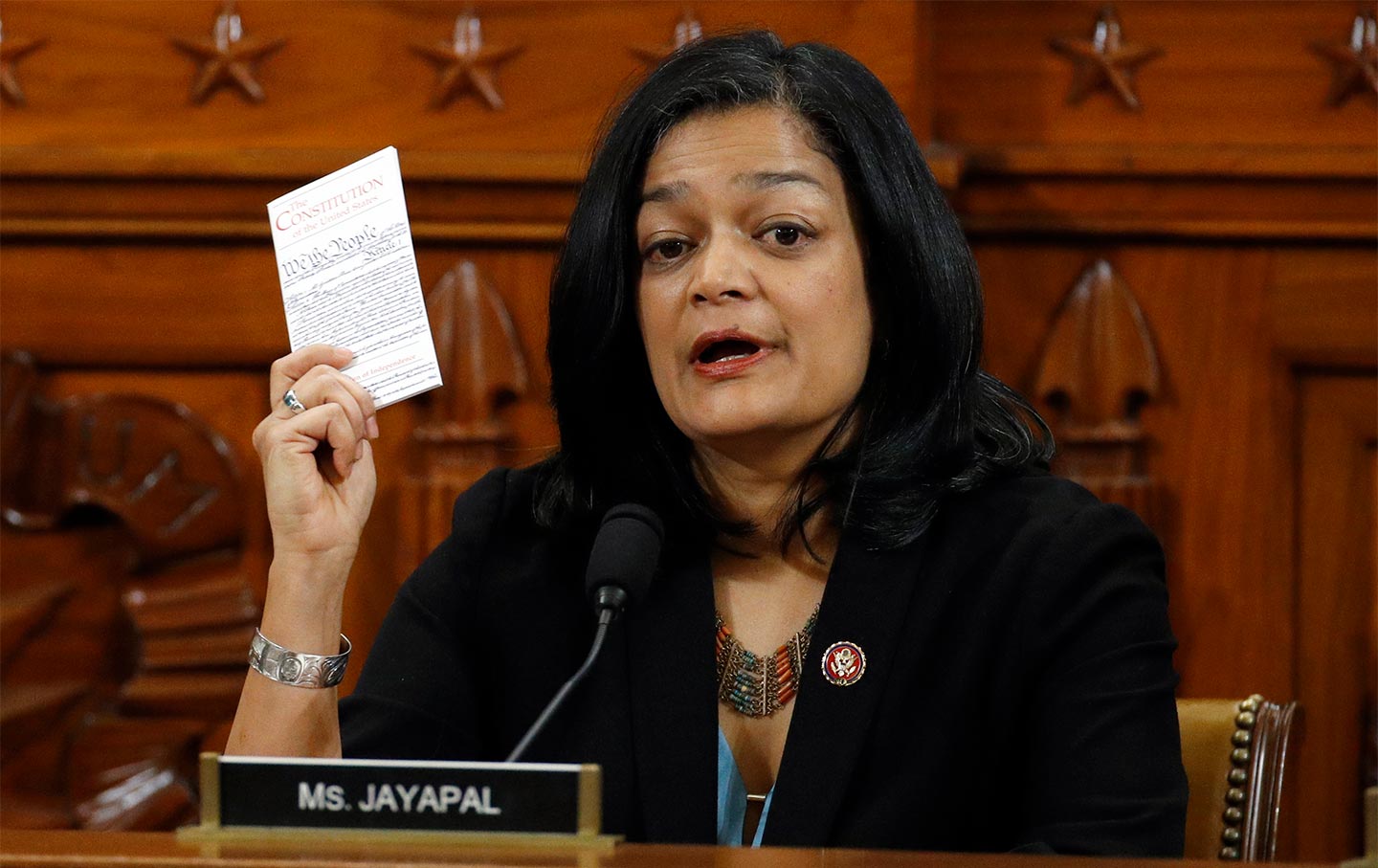 Representative Pramila Jayapal holds up a copy of the US Constitution as she votes yes to the second article of impeachment against President Donald Trump. (Getty Images / Patrick Semansky)

More than two centuries ago, at the Constitutional Convention of 1787, George Mason posed the question that framed the founders’ understanding of the presidency they had established. “Shall any man be above justice?” he asked. “Above all, shall that man be above it who can commit the most extensive injustice?”

Mason answered his own question: “No point is of more importance than that the right of impeachment should be continued.” His view carried the day and extends to our time. Impeachment has remained the tool for ensuring that no president may serve as an “elected despot.” This was not a radical construct. It was a solemn commitment, made in the summer of 1787 by veterans of a struggle against an imperialist monarchy.

On Friday morning, a majority of the members of the House Judiciary Committee renewed that commitment. “The president has engaged in gross abuse of the powers of his office and then systematically obstructed Congress in our efforts to investigate,” declared Representative Jamie Raskin, who taught constitutional law before his election to Congress in 2016. “By a vote of 23-17, we voted this morning to pass both impeachment articles out of [the committee].”

Raskin brought to last week’s deliberations a sense of history and mission. And he asked his House colleagues to do the same. “I urge members to study the overwhelming evidence of both these high crimes, as well as the strong pattern of corruption within which they took place, and then to vote their conscience when the articles come to the House floor,” declared Raskin, who well understands that the job of Judiciary Committee members at this point is to make the case for the impeachment of a president who has abandoned his oath to respect the dictates of the Constitution.

Our constitutional crisis finally will be addressed with a constitutional cure, and the wisest members of the House will recognize a duty to give it scope and meaning. There is some truth in Politico’s observation that “the three-day Judiciary Committee proceedings [preceding the impeachment vote] were largely an exercise in grandstanding, speechifying and at times monotonous repetition—an endurance exercise in which each side appeared to be baiting the other to trip over their arguments or commit procedural offenses that could resonate outside Washington.”

But there is surely also truth in the reverence with which the wisest members have approached their responsibilities.

Past impeachment proceedings have identified champions of the system of checks and balances and defenders of the Constitution as it should be understood and utilized. Raskin is one of them. So, too, is Representative Pramila Jayapal, the cochair of the Congressional Progressive Caucus, who delivered an epic address to the Judiciary Committee prior to the impeachment vote.

Speaking as a naturalized citizens for whom “being an American is a conscious choice and a granted privilege”—“a dream we chase across deserts and seas to join the larger American story”—Jayapal framed this moment as “a test of the vision of our framers, the resilience of our Constitution, and the character of our elected officials.”

The congresswoman recognized the whole history of the American experiment in democratic governance and the history that is yet to be written. “For this reason,” she announced, “I will vote to impeach Donald J. Trump—soberly; shouldering the responsibility that was given to me by my constituents; and honoring my oath to protect and defend and protect the Constitution of the United States of America.”

Jayapal’s explanation of her vote merits the attention of her colleagues and all citizens:

America is a bold vision rooted in the fragile idea of a democracy in which power is derived not from the bloodlines of monarchs, but from the votes of people.

Ours is a nation of imagination and faith, all of us engaged in this great experiment of democracy. We take our power and collectively, through our elections, we entrust it to a President who must always act in OUR interest, not their own.

The Framers believed in the promise of America, but they also knew the dangers of power unchecked.

And, so, they gifted us the Constitution of the United States, the protective and connective tissue that functions as the highest law of our land—and which entrusts this body, the People’s House, [with] the solemn responsibility to hold the Executive accountable.

Jayapal has embraced that power, with a recognition of the duty that the people of the United States have every reason, and every right, to expect to be fulfilled by members of a legislative branch that is supposed to check and balance the executive branch.

“This abuse of Presidential power and obstruction of Congress are the highest of Constitutional crimes and the gravest of betrayals,” declares Jayapal. “If we allow this President to put himself above the law, we allow all future presidents to be above the law. We submit then to the fact that we will no longer be a democracy, we will be a monarchy or a dictatorship.”