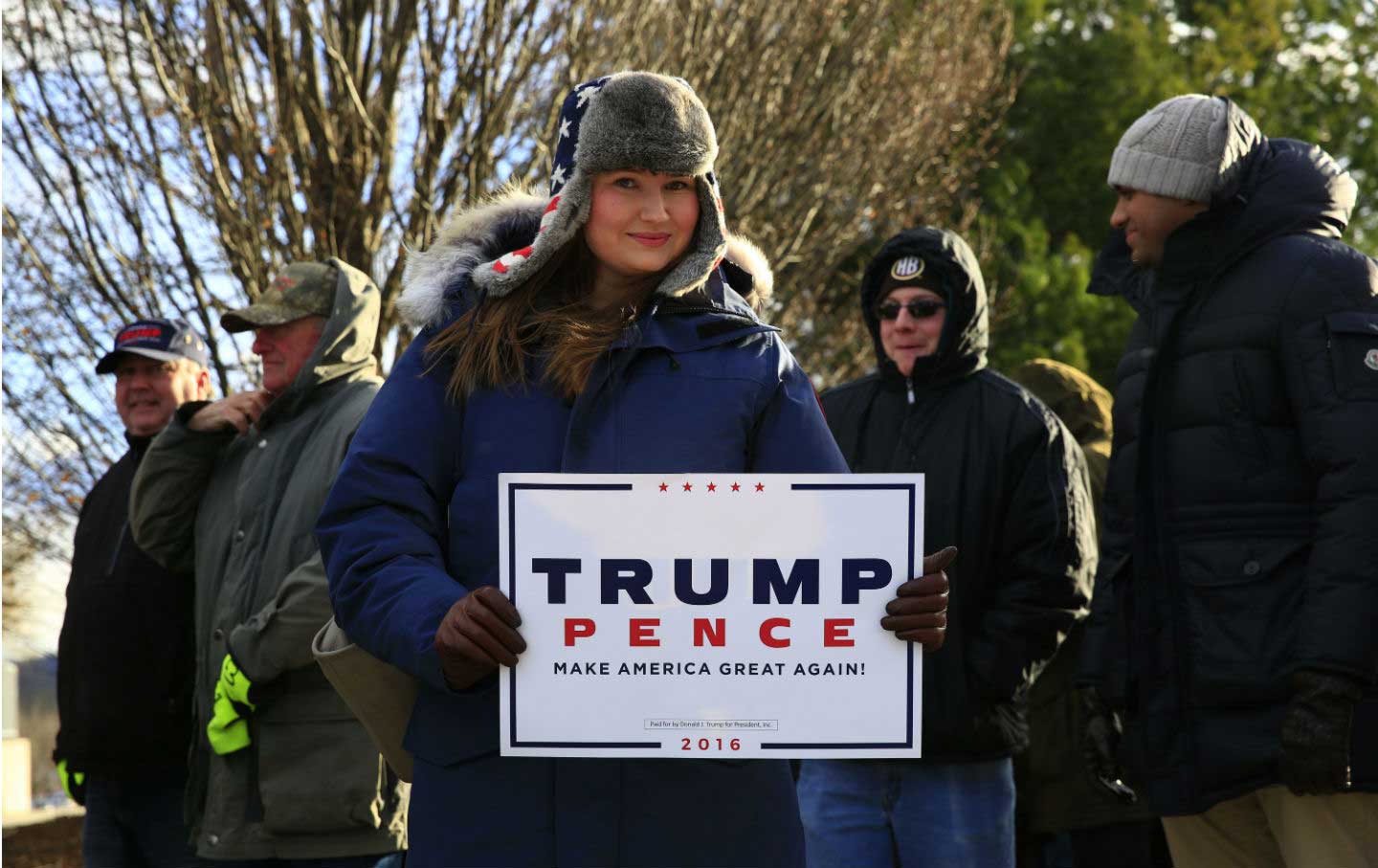 Participants in the meeting that President-elect Donald Trump is holding in the city of Hershey, Pennsylvania, as part of the USA Thank You Tour. (Sputnik via AP / Caitlin Ochs)

As Donald Trump’s popularity with white working-class voters became vexingly apparent a year ago, the pro-labor organization Working America sent its canvassers out to have “front-porch conversations” with more than a thousand voters in Ohio and Pennsylvania. The AFO-CIO–affiliated group found trouble: Twenty-five percent of the Democrats they contacted said they would be voting for Trump. His appeal wasn’t about specific issues, Working America director Karen Nussbaum told me last year. “They have a strong feeling that government isn’t working for them, and they want political leadership that helps them. If we move them to clarify who’s really to blame and who really will help, we can help make sense of a frightening situation.”

Apparently, Democrats failed to do that. In the states Working America canvassed, a surprising number of white working-class voters who had backed Barack Obama chose Trump over Hillary Clinton, helping flip those states to the GOP. So after the election, Nussbaum’s team went back into the field, surveying over 2,300 voters in Ohio and Pennsylvania to make sense of what had happened. Their conclusion, provided exclusively to The Nation today: Many Trump voters “are as up for grabs [to Democrats] now as they were before the election,” Nussbaum said. That may be of little comfort, two days before the inauguration, but it should remind Democrats that the defection of some of their voters to Trump wasn’t a lasting shift based on policy but a bad choice these voters nonetheless perceived as best for them.

Working America’s post-election report resists a shrieking, clickbait headline. Like all of the group’s work, it’s the result of conversations, not polling, so extrapolating from its numbers can be hard. It’s also not trying to be a scientific, demographically correct sample. For example, it deliberately over-interviewed Democrats, as well as white voters, and included non-voters in its data. As a result, white voters in the survey favored Clinton over Trump 47-40 percent (with the rest either voting third party or staying home); nationwide, white voters backed Trump 58-37. Voters of color in the survey backed Clinton 75-10, which was closer to the national result. A disturbing 11 percent of voters of color the group surveyed didn’t vote at all, compared with 6 percent of white voters. Among the Trump voters, there were some “lock her up” diehards, Nussbaum said. But most of them “wanted to talk with us, they’re still searching.” One-third of the folks they canvassed decided to join Working America, an openly pro-labor progressive organization—and of those, one out of five voted for Trump.

“None of us won,” a 50-something white male Trump voter on Cleveland’s west side told veteran organizer Soren Norris when he visited him after the election. “I had teased him, ‘Well, your guy won, I’m the one who should be dejected here,” Norris told me. That “none of us won” answer “echoed a theme I heard from a lot of Trump voters,” Norris said. Back in July, I followed Norris around Brooklyn, Ohio, just outside of Cleveland, to talk to white working-class voters there. Six months later, we reconnected by phone, and he shared some of what he heard after the election. It was confusing, he admitted.

There was the woman who got insurance through the Affordable Care Act, and voted for Trump anyway, because, she said, “he’s just talking, he won’t get rid of it.” An 80-something lifelong Democrat switched to Trump because “he didn’t feel safe anymore.” A lot of the Trump voters he talked to “just couldn’t stomach Hillary.” But most disturbing to Norris was talking to people who didn’t vote, who tended to be younger and/or voters of color. “They really regretted not voting,” he said. “They didn’t realize Trump could win.”

Nussbaum finds hope in “the similarities of concerns and priorities” between Trump and Clinton voters, as well as in the fact that so many Trump voters seemed to have made their choice reluctantly. I reminded her that, last summer, she had told me that Clinton “can absolutely be competitive” with swing-state white working-class voters (and for the record, I wholeheartedly agreed). That prediction ended up being wrong; Clinton lost white working-class voters by a significantly larger margin than Obama did in 2008 and 2012. I asked Nussbaum, gently: what happened?

The Working America leader declined to criticize the campaign, but admitted Clinton’s message did not get through. “The problem comes down to: Who are they listening to? It’s a lot of right-wing media,” she said. Many voters told Working America’s canvassers that “Hillary doesn’t ever say what she’s for,” Nussbaum explained. Canvassers could share “the fact that she has a very developed plan. But they didn’t hear it.”

Just as Working America’s findings resist simplification, its prescriptions do too. The biggest problem, Nussbaum says, is that “the left hasn’t built any kind of infrastructure. Given the decline of unions, what is there in these communities that expresses our values? Who is there to tell people the truth? How do we break through the monolithic messaging” of the right,” she asks. “We treat elections like a short-term project every two years. We need to invest in all kinds of communities, in local activism that puts people together in coalition.”

Interestingly, Working America’s canvassers found, despite the story line that “Trump didn’t have a ground game,” Nussbaum says, the number of Trump voters who told canvassers they’d been contacted by Trump campaign was close to the number of Clinton voters who said they’d be reached by the Clinton campaign. It could be that the Trump campaign was stealthier; it could also be the role that the Koch-brothers group Americans for Prosperity, or the NRA, played in activating local networks that turned out the Trump vote. Canvassers found more AFP literature on doors they knocked on than they expected, Nussbaum said. (This echoes Harvard sociologist Theda Skocpol’s influential take on the institution gap between progressives and conservatives.)

In the end, Nussbaum said, Working America’s canvass provides progressives some reason for optimism. “We talked to people who had just voted for a woman-hating demagogue. But there’s an openness and fluidity now that we can’t afford to ignore.” Some Trump voters, she predicts, “won’t want to tell their grandkids they voted for him.” That’s why Democrats can’t afford to write off the white working class, she said. “We have to bring along the folks who are open—we can’t govern without them.”