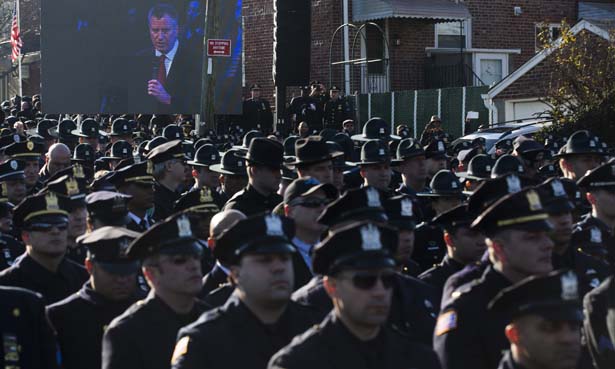 Gotham’s thin blue wall is fracturing from all sides. In recent months, New York City has been rocked first by protests over police brutality, then by harsh tensions in the wake of two police slayings, and now an apparent unofficial “job action” by the police. Despite denial from union brass, there has been a steep drop in police activity, summonses down roughly 90 percent and more serious arrests declining by over 50 percent, compared to the previous year.

If this is indeed a coordinated rulebook labor action, it may prove oddly popular with the public: as long as their everyday lives aren’t too disrupted, some people may feel relieved by fewer encounters with law enforcement and “quality of life” penalties (though if we aren’t missing their presence, the defiant cops may fail to make us value them more by withholding their labor). And the inflammatory speechifying of Pat Lynch, head of the NYPD’s largest union, the Patrolmen’s Benevolent Association (PBA), hasn’t quite charmed the masses into rallying around the cops.

Whether the police slowdown marks an organized insurgency or just individual expressions of frustration, the “depolicing” phenomenon raises tricky questions about the role of the police in society and in the labor movement.

Cops are workers. They’re employed to do a job, albeit one that sometimes involves racially profiling or shooting our neighbors, or squandering our tax dollars on paramilitary swag. It’s difficult to argue against police unionization in theory, if you adhere to the principle that everyone who works has a right to organize.

But what to make of a union of workers who have historically been charged with breaking strikes and protecting the property of corporations? As pivotal cogs in the machine, cops may suffer from poor working conditions or job insecurity. But when they’re arbitrarily arresting kids or tear-gassing protesters, they are complicit, and instrumental, in a system that’s in many ways inherently corrupt and anti-democratic. The boys in blue, as historian Sam Mitrani puts it, have throughout the modern era been designed to “use violence to deal with the social problems that accompanied the development of a wage-labor economy.”

Policing in practice is politically complex; public opinion remains ambivalent on the overall value of police, often depending on your background. In a segregated urban landscape, views of the cops may be colored by whether your community is white and affluent, or a “high-crime,” “broken windows” area patrolled by cops from Long Island. And individual police can’t be seen as the principal actors of a hegemonic social order they enforce. Our militarized “civilian” police force can’t be “reformed” until we move toward a society that ultimately demands less (and is hence less dependent on) policing.

So should the labor actions of recent weeks alarm New Yorkers? If PBA members go beyond passive de-policing and escalate to a confrontational “coup” against the Mayor, the cops could shift from patriarchal enforcers to a rogue agency. But New Yorkers should not buy the conservative line that these events are a reason to weaken public sector unions across the board.

Labor actions and strikes are an effective—and often the only—way for civil servants to leverage their limited economic power. When teachers go on strike, they’re generally making a legitimate case that “their working conditions are your kid’s learning conditions.” This is materially and ideologically different from the kinds of thuggish, conspiratorial abuses of power that may arise in unions as they do in any other mass organization—despite the conservative canard that government workers “hold the public hostage” when they organize.

Historian Joseph Slater of University of Toledo points to the 1919 Boston police strike as a case study of public sector unionism clashing with the interests of the state and industry. The police uprising, driven by issues of basic wage and labor conditions, triggered a fierce military crackdown from Governor Calvin Coolidge’s administration, and a nationwide trend followed of banning police agencies from affiliating with the AFL and CIO. This was driven, Slater argues, by fears of “divided loyalty,” under which police might “no longer be a force dedicated to defending the interests of capitalists and busting the heads of those who challenged those interests.”

The current federal and state bans on public sector strikes reflect the government’s interest in controlling and containing the labor actions of its workforce. Labor can counterbalance institutions of power, but the state still insists on being the boss, despite purporting to be the people’s servant.

So the current police-community divide in part grows out of historical restraints on police unionization, Slater argues:

the largest police unions (e.g., the Fraternal Order of Police) have always been outside the “house of labor.” This combines with an “us against them” attitude that is often common within police departments, and a sense of being a disciplined, paramilitary group that helps produce what one sees in NYC now.

But Slater adds via e-mail that “police have a constitutional right to be in unions and will act politically no matter what.” That is, they may have bad politics regardless of whether they have collective bargaining rights.

Grappling with these contradictions might actually foster a more democratic labor movement. Ari Paul argues that police unions deserve not solidarity from other city unions, but rather, healthy antagonism—public sector workers like teachers should take a forceful stance against police brutality.

The point of labor organizing isn’t necessarily promoting ideological purity among the proletariat; it is to take the power structure of waged labor that forces the exploited to be complicit in their oppression, and empower them to resist to the greatest extent possible.

It’s too late for the NYPD in its current form to untether itself from the power structure that feeds it. And the apparent ad-hoc labor action probably won’t fix the many problems within the force. But against the backdrop of community outrage and frustration with law enforcement, the slowdown may perhaps give residents some space to imagine what life in the city could be, if the people—including a real mass labor movement with a democratically managed civil service—had the power to redefine public security.