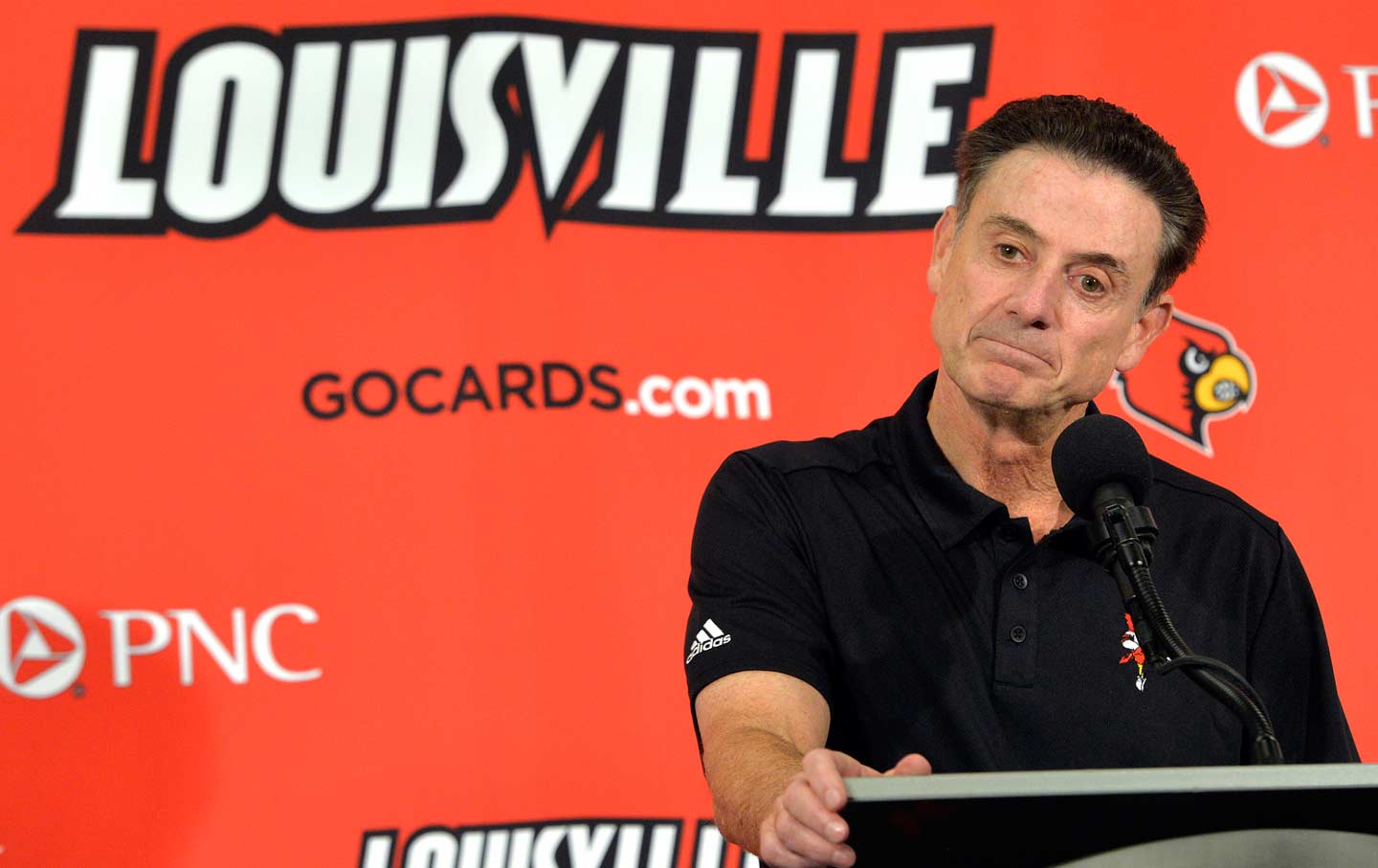 Louisville head coach Rick Pitino maintains that he had no knowledge that sex workers and strippers were used to lure recruits to his program. (AP Photo / Timothy D. Easley)

We all write the word “alleged” when it comes to “Louisville Madam” Katina Powell’s assertion that she supplied strippers and sex workers to lure recruits for the local big-time basketball program. But the allegations are easy to believe, for one critical reason: If they weren’t valid, the Louisville War Room would be working overtime to discredit Katina Powell, destroy her character, and wreck her life. Instead, they are in a retrenchment mode, looking for scapegoats, and trying to save the job of superstar head coach Rick Pitino, as well as the future of the most lucrative hoops program in the NCAA.

Pitino’s friends in high places are saying that there is “no way” he could have known. They want us to believe that a man described as the Godfather of Louisville was kept in the dark about years of sex parties with players, coaches, and campus security all allegedly present.

The trashing of Katina Powell has been outsourced to sports-radio talkers, the local press, and social media. It is not surprising that she has become a target. Powell is not only threatening the golden goose; she also speaks openly about having no regrets for having been a sex worker or over having her young daughters—both over 18, Powell insists—do sex work for her at the very parties in question. When asked if she had any discomfort over her children going into “the life,” she merely said, “They wanted to make money. They wanted to have fun. And they wanted to do it with me…. They always wanted be around their mom. And if it wasn’t with me, they would have done it for someone else.”

When asked why she was coming forward now and writing a book, she said she was done with sex work and was doing it “for the money.”

People have been utterly appalled by her words, and yet, as is often the case when you actually listen to sex workers, she may be the most honest person in the room. The NCAA system is an ugly greed-pit of adults using teenagers and monetizing the college experience for their own massive financial gain and personal gratification. They have no qualms about warping these young kids, as I wrote earlier this week, by using women as a form of currency in their gutter economy.

Players get pimped by their coaches, by the NCAA, and by their schools. Who is pimping and who is getting pimped is such an essential part of the NCAA experience, it has its own lexicon and understanding.

Charles Barkley made it plain when he said, “Nick Saban [Head Coach] of the University of Alabama calls the agents pimps. But the coaches pimp more than agents. At least these agents are investing in these players…. Players make these colleges money. We at [Turner] just bought the NCAA tournament for $11 billion. Let’s stop joking like this is amateur stuff…. there’s no integrity. NCAA sports [are] bona fide big business.”

Hall of Fame Georgetown coach John Thompson Jr. called the football schools that tore apart the Big East conference “pimps,” saying “They came in and used us and left us. Who does that? A pimp.”

Joe Paterno–in a quote that haunted him during the Sandusky child-abuse scandal–was more blunt about it when he said, “We have raped a generation of young black athletes. We have taken kids and sold them on bouncing a ball and running with a football and that being able to do certain things athletically was an end in its self. We cannot afford to do that to another generation.”

I could list a thousand more quotes in a similar vein. The language of sex, violence, and rape is used so often to describe the student-athlete experience, one wonders why NCAA president Mark Emmert doesn’t elicit cries of “stranger danger” when he enters a room.

As for Katina Powell, let us all please remember that when it comes to the sports world, the truth tellers never arrive looking like Russell Wilson or Tim Tebow. They are never the people who praise the lord and “give 110 percent”. Those are often the people you have to be most careful around: the ones who should have to prove their honesty before you offer your trust. The truth tellers usually come looking a lot like Jose Canseco or Tim Donaghy… or Katina Powell. I have interviewed both Canseco and Donaghy and, after the fact, I felt dirty, but not only because of their desire to sell books and name names for a quick buck. I felt dirty because of the truth they allowed me to see. When you are offered unvarnished candor in this sports world, it is as bracing as getting ice-cold mud poured down your back. It feels so different and so rare, you know it when it’s happening. Katina Powell has that similar vibe.

This is not the world she created, and defending her right to make a living on this scarred landscape is not the same as endorsing the way she does it. (To use an old phrase, one can believe in the right to divorce, while not thinking that every married couple should get a divorce.) No one, with even a tangential connection to the NCAA, is in any position to judge Katina Powell or her relationship to her daughters. Maybe she felt like she was protecting them. Maybe she was using them. Maybe she was exploiting them. Or maybe in this story, Katina Powell is just the lowest-level pimp in the room. Instead of writing corporate how-to books, Rick Pitino and his ilk should be delivering seminars in Big Pimpin’. Katina Powell isn’t close to being on his level.