Since the advent of television, appearances by presidential candidates have shaped American political contests. The first televised presidential debate in 1960, between John F. Kennedy and Richard Nixon, famously revealed the former as the more handsome, composed option, while the latter’s sweaty, pale visage contributed to his ultimate defeat.

The Brilliance of Lines

In Philip Guston’s drawings and paintings, on view at Hauser & Wirth’s 22nd Street gallery until January 14, Nixon’s physicality becomes, literally, a very heavy burden. In 1975, Nixon suffered from a new attack of phlebitis, the inflammation of a vein, which causes pain and swelling, in his leg. Guston’s Phlebitis series, begun the same year, turns Nixon’s leg into a hefty symbol. One ink drawing of the leg itself, inscribed with the words “the Phlebitis Series,” introduces a series of preparatory drawings and a painting that focus on Nixon’s ailment. In the painting to which the drawings build, San Clemente (1975), Nixon stands in a suit on the beach of San Clemente, California, where he owned a home. His left leg, about three times larger than his right, bursts swollen and veiny from his black pants. Black, textured material partially covers the foot, but the toes and heel break through. Nixon’s leg becomes a grotesque reminder of the man’s ills, which no suit could possibly hide. Strips that recall bandages wrap around the other leg—he’s bound, weighed down, and unlikely to extract himself any time soon. Indeed, Nixon never did overcome the scandals that defined his public career by 1975: his attempt to restrain the publication of the Pentagon Papers and Watergate. Guston painted a man beyond redemption.

In addition to the leg, Nixon’s face also takes a hit. Guston replaces the president’s nose with a large red phallus. His cheeks become a hairy scrotum with a tear dripping down. If the technique at first appears juvenile (think Jonah Hill’s character’s dick drawings in Superbad), Guston’s daughter Musa Mayer says they were meant to offend. During the fateful debate with Kennedy, Nixon refused to wear makeup, fearing public mockery. Nevertheless, he looked impotent next to his robust opponent. Certainly, Guston’s depiction of a droopy, inflamed, phallic nose recalls questions about Nixon’s sexuality. Overall, Guston depicts Nixon as more pitiful than evil, more hapless and ill than calculating or menacing. The viewer, if not totally repulsed, might even begin to empathize. 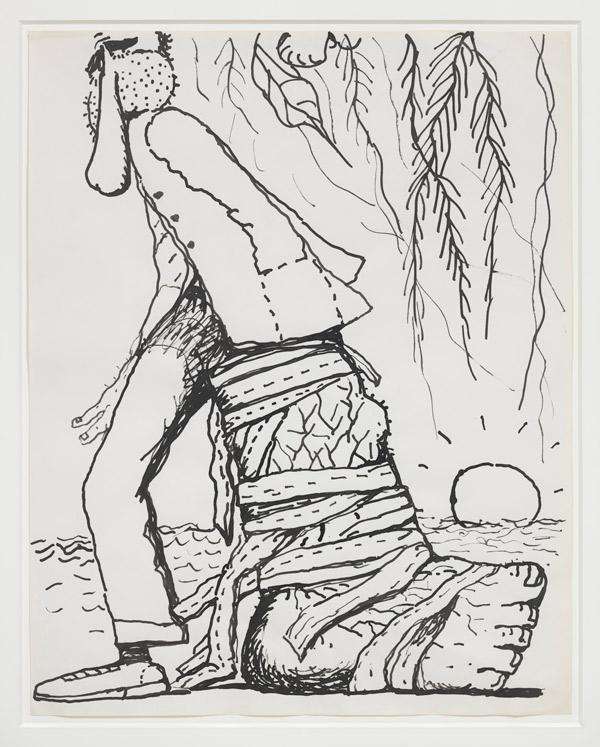 In 1970, Guston’s exhibition at Marlborough Gallery famously prompted major critic Hilton Kramer to label him “a mandarin pretending to be a stumblebum.” Avoiding the hostility of the New York art world, Guston decamped to Italy for months. Like Nixon in San Clemente, the painter was in self-imposed exile after public humiliation. When he returned to America, holed up in Woodstock, Guston read Philip Roth’s Our Gang. The travel, time away from the spotlight, and Roth’s political satire were enough to inspire Guston creatively. He made the earliest among the drawings at Hauser & Wirth, the Poor Richard series (1971), after reading his friend Roth’s book. But his hang-up over potential criticism kept him from sharing his work. Roth even offered to help in publish his work, but the artist declined.

His concerns ranged beyond the political to the aesthetic. A fine artist who gained acclaim as an abstract expressionist, Guston found that critics reviled the figurative work he began creating in the mid-1960s. Guston feared that the public would condemn the drawings as “low” art, and that the series would denigrate his oeuvre as a whole. Even in 1988, a Museum of Modern Art curator mounted a retrospective of Guston’s drawings and opted to exclude the Nixon series. “That’s an example of how marginalized such work would have been at the time,” says Mayer.

If these works represent Guston’s attempt to engage with the political climate of his day, he too suffered a certain suppression and inefficacy. Guston’s series stayed private until decades after the artist’s death. Hauser & Wirth is showing many of the works to the larger public for the first time. The story of the work on view at Hauser & Wirth, then, is also a story of a missed opportunity, a tree that fell in the forest over 40 years ago and is just now making a sound. As Our Gang stirred new thought about the Nixon government, so too could Guston’s work have riled the public.

Yet Mayer hopes the work will do some good now. “What inspired this show was our political situation now and feeling that a show like this would serve as a tonic or an inspiration for younger artists to not shy away from incorporating politics in their work,” she says. Instead of looking backward, she hopes people will view these works—and the political figures they depict—through a contemporary lens. As Jerry Saltz recently wrote for New York magazine, “Trump’s victory is a crucible of possibility for a new generation, who will do what artists have always done in times like these: go back to work…. this is all a kind of call to action that will yield things not yet fathomed or decanted.” And when artists are ready to engage, let’s hope that a few doctrinaire art critics don’t hold them back.