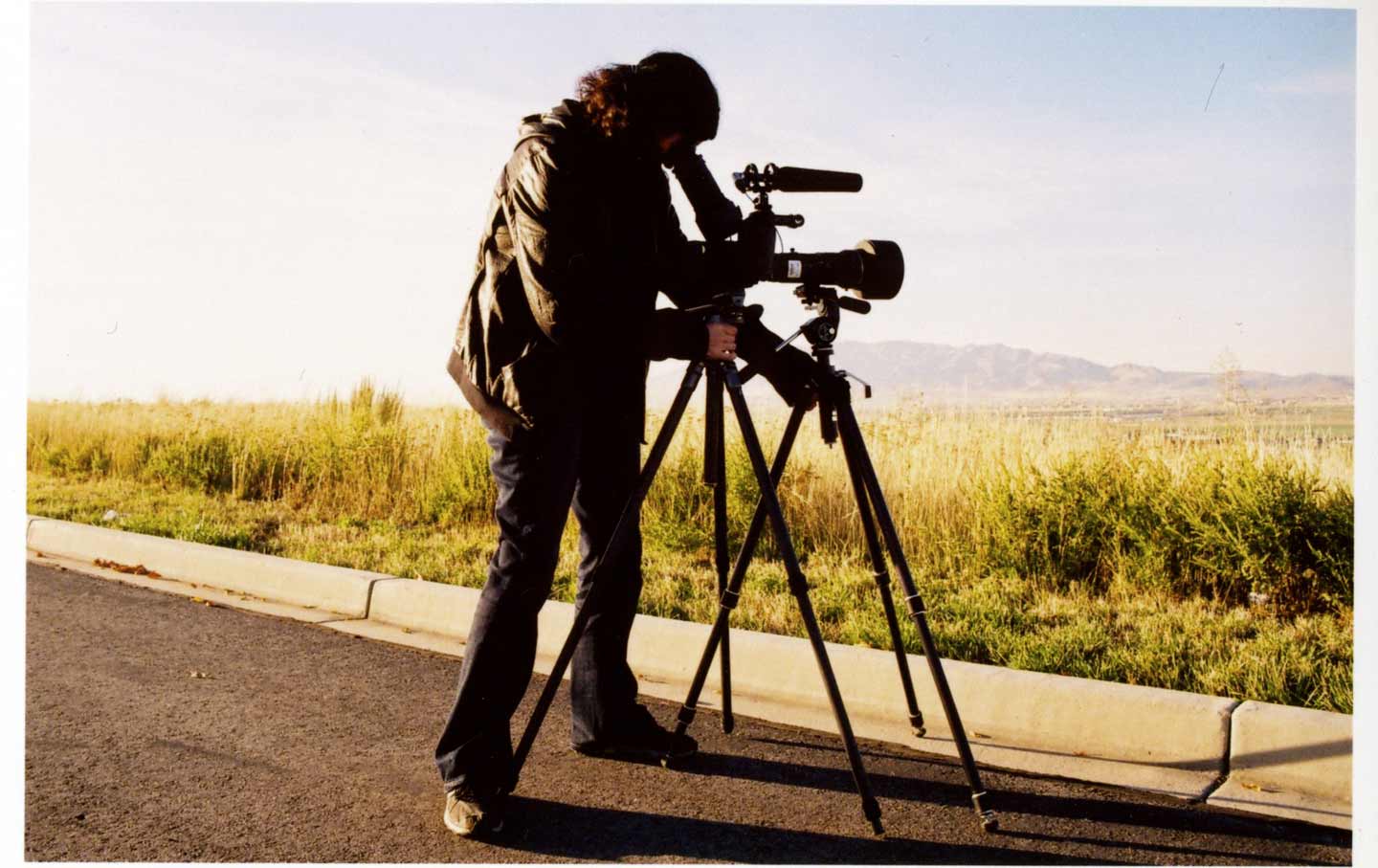 “Artists work within political realities, no matter what the content or focus of the work,” says artist Laura Poitras, whose exhibition, “Astro Noise,” opened at the Whitney Museum of American Art on February 5. “Art is alive. It’s vital.”

Poitras made headlines with her 2014 documentary, Citizenfour, which details her trip to Hong Kong to speak to NSA whistle-blower Edward Snowden. “Astro Noise” explores many of the issues in Poitras’s films: surveillance, the American response to 9/11, the Guantánamo Bay detention camp, and the drone wars. She denies that her work takes a “stance” and is hesitant to claim that her work is any more political than other artists’. When “Astro Noise” opened, the Whitney was hosting a Frank Stella retrospective on its fifth floor, filled with large abstract works. Certainly, Stella lived within a political reality, but it’s hard to tell from what’s mounted on the walls. For Poitras to deny that she’s working in a particularly political mode seems querulous and evasive. Some works are certainly more politically and socially engaged than others. To deny that just seems silly.

Poitras constructed her exhibition as a narrative. To enter the show, the viewer walks into a dark room and is immediately confronted with a large screen displaying footage of New Yorkers’ faces as they witnessed the aftermath of the World Trade Centers’ collapse. On the other side of the screen, the US military interrogates prisoners in Afghanistan following the attacks. Throughout successive rooms, a screen on the ceiling projects night skies over Yemen, Somalia, and Pakistan for a work called Bed Down Location, and a series of peepholes reveal official government documents and interviews related to Poitras’s themes. In the final room, streaming data reveals that cameras have been watching and broadcasting the bodies lying on the raised platform of Bed Down Location.

With this format, Poitras says she gains a new control of “bodies and space.” She and curator Jay Sanders charted the exhibition’s path and erected walls to strictly determine the paths that audiences will take. Sanders describes the layout as a “labyrinth.” Indeed, to navigate “Astro Noise,” you have to wander through blacked-out rooms, never quite sure what lurks beyond the next corner. The tight construction and the enveloping darkness effectively evoke a sense of claustrophobia. US decisions have ensnared the country in war and controversial practices, and the exhibit effectively instills in the viewer a corresponding anxiety and the feeling of being trapped.

Some of the pieces are more difficult to unravel. Before walking into the “labyrinth,” the viewer confronts Poitras’s ANARCHIST series, pigmented prints mounted on the wall. While exhibition materials reveal these to be “a series of images that the artist has drawn from the documents provided to her by Edward Snowden” that “show various stages in the process of descrambling the collected signals,” they don’t mean much to the viewer unacquainted with high-level signals and technology. That is to say, a majority of us.

As the museum’s Curator of Performance, Sanders is interested in the way that people populate the space. After watching a group enter the exhibition for the first time, he said that “their bodies and attention felt like part of the work,” completing the show. Additionally, the form requires visitors to negotiate space with one another. They must share the “bed” in Bed Down Location and leave themselves vulnerable as they lie supine in a dark room with strangers. The exhibition also implicates viewers, who become part of Poitras’s story. We, too, are members of the society that has allowed the “war on terror” to drag on without end.

“Astro Noise” asks how we advanced from the “open, emotive, and raw” faces (as Sanders calls them) at the beginning of her exhibition to a country conducting drone wars and advocating torture. This, perhaps, is the most genuine and poignant question the show raises. It’s not really asking if drone warfare is a good thing or if intense surveillance is a sinister invasion of privacy. Poitras seems to know those answers already. The progression of history, however, how we got from then to now, is much more nebulous. How did we end up in this strange war? When, and in what way, are we going to get out? At what cost to individuals? Poitras asks us to meditate more deeply on these topics and consider them in a new way.

“I certainly am concerned about some of the decisions that were made,” says Poitras. “I try to flip things. How would Americans feel if other countries were flying drones and killing people in America?” Still, Poitras is hopeful. She notes how Berlin, where she’s previously reported, moved out of a dark history to become the place “most protective of privacy rights.”

“In order to have these kinds of shifts, you have to reckon with transgressions,” she says. “I think we have made transgressions as a country. For instance, the use of torture after 9/11. Nobody’s ever been held accountable. I think cultures of impunity are very frightening. On one hand, I’m concerned. On the other hand, we have many examples of societies and of political realities that have shifted.”

Across the East River at the Brooklyn Museum, a large group show echoes Poitras’s assertion about the political nature of all art, many times over. In “Agitprop!,” curators Saisha Grayson, Catherine Morris, Stephanie Weissberg, and Jess Wilcox introduce historical case studies about “agitprop,” a shorthand for “agitation propaganda,” and display work by 20 contemporary artists examining their own political realities through a broad assortment of media—posters, videos, weavings, clothing, and even a rickshaw. Each original participant selected another artist or group to display work alongside their own, and the 20 new projects will be on view starting February 17. The second group has invited a final round of artists to join for a third edition opening April 6. Unlike the spare, dark rooms of “Astro Noise” that feature the perspective of a single artist, “Agitprop!” comprises open, fully-lit spaces that “can flow any way,” according to the curators, and will become increasingly busier as they grow to embrace an expansive range of perspectives.

The Art of Politics

“Art has always had political agendas,” said Grayson. “You can trace political art throughout any period of time.” At the beginning of the 20th century, new technologies, she said, such as “film, poster-making, cheap journal printing, photography” allowed artists to distribute their messages more widely. The curators begin their show with work from this moment. Some of the earliest artwork in the gallery is from the Soviet era and the Women’s Suffrage movement. Though the works aren’t chronological, Grayson said, “you see the same strategies showing up over and over again. No matter how you look at these things, you’ll find connections.” For example, the AIDS activist artist collective Gran Fury used found footage of a Miss America pageant as a backdrop for the bold lettering in one poster: “WOMEN DON’T GET AIDS THEY JUST DIE FROM IT.” Throughout the show, artists raise issues from food justice to environmental activism, from economic inequality to inequity in the Middle East. The amount and variety of work gives viewers a broad perspective on the theme, but the selections can also feel arbitrary. With all the new projects coming in February and April, it remains to be seen whether the additions will make the galleries feel more complete and exuberant, or cacophonous and overwhelming.

In contrast to the pieces in Poitras’s show, all works in “Agitprop!” also had lives outside of art galleries. For example, an artist collective called the Yes Men, along with many other groups and associates, created a mock New York Times filled with aspirational, instead of actual, news. “IRAQ WAR ENDS” proclaims the front-page headline. Other headers include “Maximum Wage Law Succeeds” and “Ex-Secretary Apologizes for W.M.D. Scare.” In 2008, the team distributed the paper throughout New York City. On the intersection of politics and art, Steve Lambert, a member of the group, spoke of an old mentor who told him, “All art is political. It’s just a matter of who it’s political for.”

“If you wandered into any museum, all that work is communicating political ideas about the history of power,” Lambert said. “All kinds of things are being made in the world that we call culture. We have to choose what’s worth looking at. Museums most times are tailored to a certain set of concerns that are interesting or attractive to a certain class of people.” He commended the Brooklyn Museum for its concern with contemporary issues and the artists responding to them.

But there are limitations to political art. The groups in “Agitprop!” rely on their activities outside of the museum to garner support. Their objects become inert relics on the gallery floor, losing some of their potency. Yet the Brooklyn Museum’s support sends a strong message about the causes and groups with which they align. If viewers don’t leave the show ready to join a cause, they’ll at least be more aware of the vast options for political involvement at all levels and the comfort that some institutions are out there, ready to advocate for them.

Perhaps what’s most striking about “Agitprop!” and “Astro Noise” are the ingenuity and openness of the institutions hosting the shows. The Whitney has given an artist an opportunity to work in a new medium, to redefine both herself and her perspective on urgent national issues. The Brooklyn Museum has bestowed curatorial control on the artists. With these exhibitions, the institutions are displaying strong, meaningful support for artists who work with today’s most controversial topics. That, at least, seems like progress.