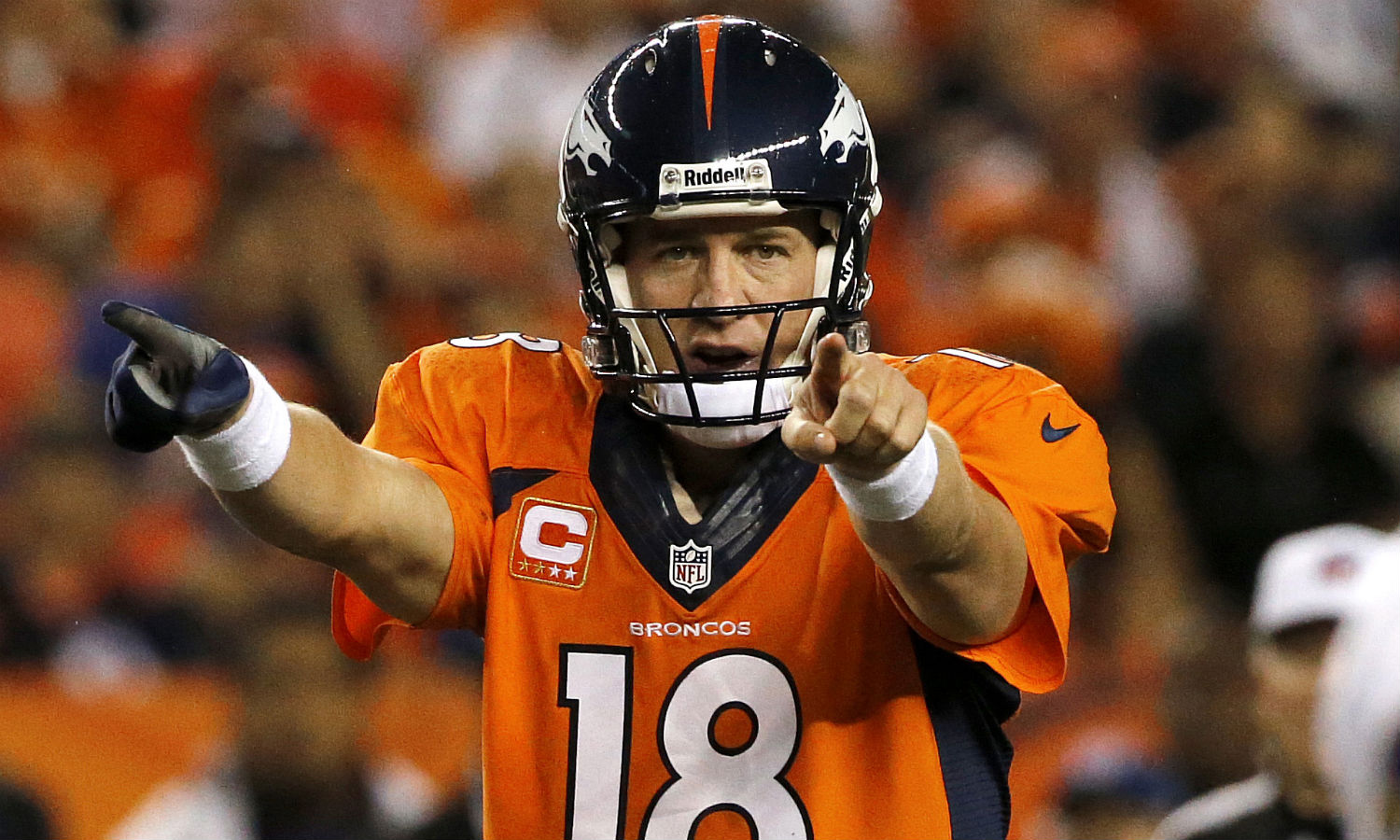 Denver Broncos quarterback Peyton Manning (18) calls a play at the line of scrimmage during the first half of an NFL football game against the Baltimore Ravens in Denver. (AP Photo)

There is a running concern about the recent selections for Sports Illustrated’s Sportsperson of the Year. Over the last decade, it has become an honor more often than not reserved for “dreamiest NFL quarterback.” An award that used to be for trailblazers, social justice avatars and people whose sense of fair play brought out the best angels in sports, had become the magazine- cover equivalent of the Sports Illustrated Swimsuit issue: all image and no substance. You could easily envision SI’s editors slamming their desks shouting, “Find me a quarterback, dammit! And he better have blue eyes and dimples!”

Since 2004, the magazine has had Tom Brady, Bret Favre and Drew Brees as their Sportsperson of the Year. So what do they do to break the trend in 2013? They give it to Denver Broncos quarterback Peyton Manning: the same Peyton Manning who in 2013 hasn’t done more than throw a bunch of touchdowns, make a ton of commercials and choke in the playoffs. In other words, a typical Peyton Manning season.

The choice of Manning is a resoundingly establishment choice that serves to obscure the rumbling resistance to the status quo throughout the sports world. This has been a profoundly atypical year, with storylines that will reverberate for years to come.

I believe that the Sportsperson of the Year, in the best tradition of Sports Illustrated, should be the person who represents what the editors believe to be the most important narrative of 2013. I already made my choice: out-and-proud soccer player Robbie Rogers. I chose Rogers because I believe that he personifies the sports story of our time: the growing confidence of LGBT athletes and their allies. Two other pros that came out of the closet, Jason Collins and Britney Griner, also would have been spot-on choices.

Another electric story from this year has been the push by college athletes to stop being treated like indentured servants while coaches and administrators make millions off of their backs. Ed O’Bannon, the former UCLA basketball great who has doggedly pursued his lawsuit against the NCAA for using his image without permission; Ramogi Huma the former college football player who founded the National College Players Association; or the Grambling State football team who stood up as one in protest of unacceptable playing conditions would have been terrific selections.

Yet another story that has defined 2013 was the growing awareness of head injuries in the National Football League. What about choosing Dr. Robert Cantu, the NFL’s concussion expert who said that he did not believe children under 14 should be allowed to play the sport? It is comments like that that turn Roger Goodell’s face a shade to match his hair. That would have been a bold choice.

Then there is tennis. There was once a time when it was not unusual to see a tennis player, particular a woman tennis player, named Sportsperson of the Year. This past year we had Serena Williams make her case as perhaps the greatest to ever take the court. If she had been chosen, Serena would have been the first solo woman to take the honor since Mary Decker in 1983. Seriously.

Lastly, there is Boston. As a born and bred New Yorker, my dislike for the Boston sports scene sometimes feels like it goes into the marrow of my bones, removable only at the cost of life itself. That said, there is no denying the international majesty of the Boston Marathon. There is also no denying the unfathomable bravery of the first responders when the bombs went off, running toward what could have been their own deaths to minimize the loss of human life. And there is no denying the fact that their courage also minimized the size of the scar that will always now adorn one of the last truly great unifying sporting events on the planet. Give it to them and tell their stories. They cannot be told enough.

What are remarkable sports year this has been. What an utterly uninspiring choice Peyton Manning was for Sports Illustrated to make: as dry and flavorless a selection as one of those damn Papa John’s pizzas he never stops shilling. If anything, his selection represents the gap that exists between the mainstream sports journalism and the narratives bubbling beneath their noses. Especially in advance of Brazil’s World Cup in 2014, Sports Illustrated needs to step down from the press box and smell what is really going on. Either the magazine needs to reevaluate its mission, or we can just dispense with the drama and give next years prize to Packers quarterback Aaron Rodgers. By their metric, he seems to be due.