This story was produced by the Food & Environment Reporting Network, an independent nonprofit news organization.

Every year US farmers use about a billion pounds of chemicals on crops, including the fruits, nuts, and vegetables many parents beg their kids to eat. The Department of Agriculture and the Food and Drug Administration are charged with ensuring that these chemicals don’t endanger consumers, and both agencies test the food supply for pesticide residues each year. They focus on foods eaten by babies and children, whose developing bodies are particularly sensitive to toxic chemicals, and typically report that pesticide residues in these products rarely exceed safety standards.

Yet, experts say, the agencies’ pesticide-monitoring approach suffers from several limitations that make it difficult to draw meaningful conclusions about pesticide risks to the nation’s food supply. What’s more, government agencies don’t monitor risks to farmworkers who labor among those chemicals, or to pregnant women and children who live near agricultural fields.

Since pesticide monitoring began about three decades ago, scientists have learned that even low doses of pesticides and other synthetic chemicals can harm children and that exposure to chemical mixtures, particularly during critical windows of neurodevelopment, may carry serious health risks that take years to emerge. And though crops are often sprayed with multiple chemicals over the growing season, both agencies track pesticide residues one chemical at a time, to determine whether a specific chemical exceeds safety standards set by the Environmental Protection Agency.

The Time Has Come for Democrats to Impeach Brett Kavanaugh

That’s why, several years ago, scientists at the Environmental Working Group, a nonprofit consumer-advocacy group, started doing their own analysis of pesticides on produce. The group relies largely on data from the USDA, which tests more produce than the FDA.

About 70 percent of US produce harbors traces of pesticides, the EWG reports in its latest shoppers’ guide to the “ dirty dozen,” those fruits and vegetables with the highest pesticide load. Strawberries topped the list, released this week, for the fourth year in a row, with an average of nearly eight pesticides per sample, followed by spinach and kale. Spinach had more pesticides by weight than any other crop.

Olga Naidenko, the EWG’s senior science adviser for children’s environmental health, says she was surprised to see kale contaminated with a chemical called dacthal, which the EPA classifies as a possible human carcinogen and European regulators banned in 2009. Among the more troubling pesticides found on spinach is permethrin, a neurotoxic insecticide that’s been linked to ADHD.

Naidenko says the list is not meant to dissuade people from eating fruits and vegetables, but rather “to call attention to the fact that there are some pretty bad pesticides out there.”

Although the EPA sets thresholds for what it says are acceptable rates of exposure, those bad pesticides have been tied to a long list of adverse health effects, especially among the most vulnerable populations. And the people who bear the highest risks from exposure to these toxic chemicals live and work in the farming communities that feed the nation.

More than 90 percent of Americans have pesticides or their byproducts in their bodies, mostly from eating conventionally grown fruits and vegetables. Health experts worry that the EPA’s pesticide-residue safety levels are too high to protect young children.

Leo Trasande, director of environmental pediatrics at New York University’s Langone Health and author of the new book Sicker, Fatter, Poorer, says many of these pesticides act at extremely low levels that mimic our body’s response to our own hormones. “These synthetic chemicals were not designed with hormonal biology in mind.”

Scientists now know that doses of pesticides once considered safe can harm developing bodies and brains. But regulations have failed to keep up. “We look at how EPA has been approving pesticides and setting those tolerances and find again and again that the agency’s not taking into account children’s heightened susceptibility to pesticides,” says the EWG’s Naidenko.

The most egregious example is chlorpyrifos, which the EPA phased out for home use in 2000, citing health and environmental concerns. As evidence of the growing list of chlorpyrifos’s diverse health effects mounted in scientific journals, the agency proposed prohibiting all uses of the chemical in 2015 under the Obama administration. But two years later Trump’s EPA rescinded that rule, calling chlorpyrifos “crucial to U.S. agriculture,” and citing a return to “sound science in decision-making.”

Regulators also fail to account for risks associated with the scores of pesticides that don’t stay where they’re sprayed, creating a toxic environment for farmworkers and their families. It’s clear that workers have higher exposure, Trasande says, “and kids of workers can be exquisitely vulnerable.”

Pesticide residues can follow workers home from the fields on clothing and shoes, then collect in the dust on floors where babies and toddlers play. Several studies show that children of farmworkers routinely endure higher pesticide exposures than consumers and that mothers living close to fields treated with pesticides, including those on the dirty-dozen list, are more likely to have premature babies and children with autism, impaired cognitive function, and other neurodevelopmental disorders.

Several pesticides have been linked to early puberty, impaired fertility, and increased breast-cancer risk, suggesting that young girls—whose brains and breasts undergo rapid development during puberty—may be particularly vulnerable to pesticide exposures. Researchers at the University of California, Berkeley, recently asked teenage girls living in the intensively farmed Salinas Valley to wear silicone wristbands—which soak up environmental chemicals like a sponge—to gauge their pesticide exposures. Dacthal and chlorpyrifos were among the most frequently detected pesticides for these Latina girls, and concentrations of dacthal and permethrin were three times higher for those who lived close to fields. 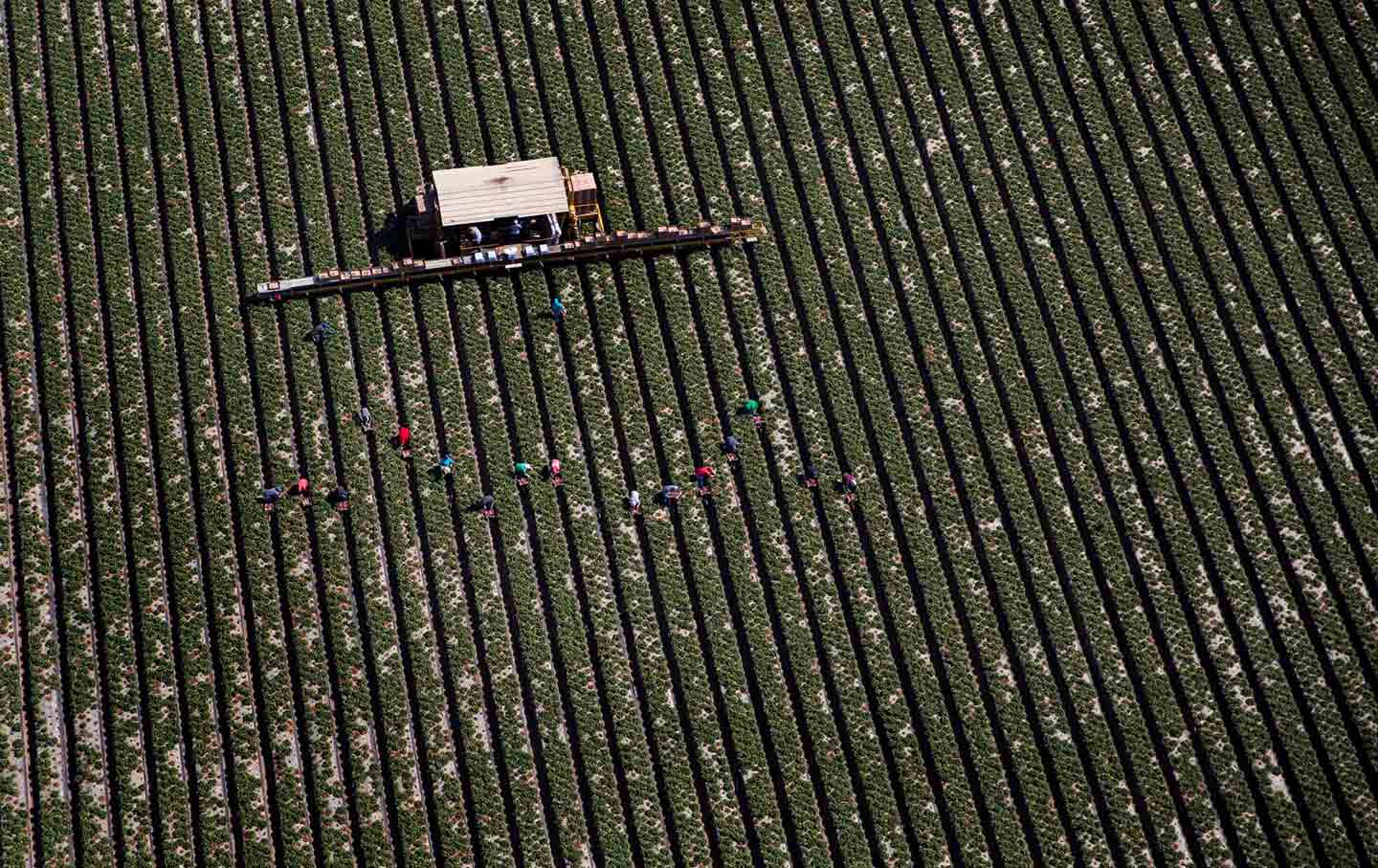 Picking strawberries in the fields of Oxnard, California. (Todd Bigelow)

California, the nation’s most productive agricultural region, used close to 210 million pounds of pesticides in 2016, the most recent statistics available, including many classified as probable or possible carcinogens, endocrine disruptors (affecting the hormonal system), and reproductive or developmental toxicants. Farmers applied more than 380,000 pounds of dacthal on kale, broccoli, cauliflower, and other crops in 2015 and 2016. The highest levels recorded in 2016 were in Lamont, a Central Valley town where the vast majority of residents are Hispanic and 35 percent of people live below the poverty line.

California growers applied 11.3 million pounds of pesticides to produce nearly 3 billion pounds of strawberries worth over $1.8 billion in 2016. For decades, the EPA gave strawberry growers an exemption to use methyl bromide, a fumigant banned by international treaty to protect the ozone layer that has also been tied to violation of the federal civil-rights laws. They applied more than 14,500 pounds of methyl bromide—in just 2015 and 2016 alone—within a mile of Oxnard’s Rio Mesa High School, where most students are Hispanic and which California health officials flagged as the school with the most toxic pesticides sprayed nearby in a 2014 report. During the same time, growers also doused fields near Rio Mesa with more than 142,000 pounds of chloropicrin, a choking agent once used in warfare and riot control, and 1,3-Dichloropropene (1,3-D), classified as a probable human carcinogen.

State regulators calculate risk based on averages of exposures to single pesticides over several months, even though growers can spray more than 100,000 pounds of fumigants like 1,3-D and chloropicrin in a single week. As a result, a 2016 study from the UCLA Sustainable Technology & Policy Program reported, “exposure to multiple pesticides occurs at a number of locations in the area, including sensitive sites like schools and daycares.” In addition, the study noted, human health risks from simultaneous exposures to drift-prone toxic chemicals like 1,3-D, chloropicrin, and metam sodium (a methyl bromide replacement) “may be significantly greater than the added risks of the individual components.”

Last year California’s Department of Pesticide Regulation measured the highest levels of 1,3-D the agency ever recorded, at a high school in Shafter, a small Central Valley town, where 83 percent of the population is Hispanic and 25 percent live below the poverty line. The levels far exceeded those the state deemed “unacceptably high” when it issued a temporary ban in 1990. The DPR relaxed its 1,3-D cancer-risk standard in 2015, after the previous risk level was exceeded multiple times, says Anne Katten, director of the pesticide and worker-safety project at the California Rural Legal Assistance Foundation.

Following the 1,3-D spike last year, Katten and members of other advocacy groups met with state officials to discuss the risks to the communities. In a follow-up letter, the group pointed out that the agency’s estimates of air concentrations far exceeded its own safety standards for both acute and chronic risks. “We urge DPR to immediately suspend all uses of 1,3-D,” they wrote in an e-mail, citing risks to nearby homes and elementary schools.

State regulators declined, noting that the monitoring data did not justify action to curb 1,3-D use. They did not acknowledge that residents and workers could be exposed to other pesticides, along with 1,3-D, that might increase their risk. “The reality is that we have a regulatory framework that just assumes that these chemicals are fine and we don’t need to regulate them in agriculture,” Trasande says. “Even when the science tells us to do it.”