Madre de Dios, Peru—For a fourth consecutive week, global attention has fixed on the fires ravaging the Brazilian Amazon. In neighboring Peru, though, it’s the government—not ranchers or loggers—setting the blazes, and the fires here are part of a massive effort to save the rain forest. For the last seven months, the Peruvian military and police have used gasoline-fueled burns and dynamite to drive out illegal gold mining.

This report was made possible by NYU’s GlobalBeat class.

At the heart of this destruction is La Pampa—a barren, contaminated plain stretching for 100 square kilometers next to one of Peru’s natural reserves. The site has been a gold mining hub since 2007, when miners set up the first camps. Soon, they became a series of gold-rush towns, plagued by human trafficking, child labor, and hired hit men. Until last February, 25,000 illegal gold miners occupied the area.

The search for gold can turn habitats into wastelands. Gold seekers cut down trees, dig out the underlying soil, and use high-powered hoses to blast the alluvial-rich earth. The remaining sediment is mixed with mercury—which binds with gold—and then torched, leaving pure gold and mercury waste, which forms toxic fumes and pollutes the land for generations.

Over the years, environmental groups and indigenous populations have raised alarms, but governmental attempts to curb mining have largely failed. In 2012, Peru declared mining in buffer zones or protected areas illegal, and in 2016, then-President Ollanta Humala launched a short-lived state of emergency. Yet mining continued to grow—in the past year, La Pampa expanded 4,164 acres, the equivalent of about 3,500 American football fields.

In February, after mounting global pressure, the Peruvian government declared a new, 60-day state of emergency—a joint effort between prosecutors, the army, a special environmental branch of the national police, and the regional government to curb the mining. (It has since been extended twice, and remains ongoing.) Peru has relied almost exclusively on military force to drive out miners, initially flooding La Pampa with 1,800 heavily armed police and army personnel. By March, forces had already taken over a former mining town and were marching deeper into the area, establishing strategic bases and carrying out interdictions—a process in which they find and detain miners and then destroy their equipment with explosives.

To reach La Pampa, military personnel usually travel by helicopter because of the treacherous terrain, but also occasionally ride contraptions called motocargueros—three-wheeled motorcycles with wagons in the back—through the makeshift dirt roads that weave through the jungle. Along the road, vegetation gives way to stretches of coarse sand, littered with tattered tarps and stagnant pools of mercury-poisoned water.

La Pampa is composed of scattered encampments and multiple informal towns, each containing homes with wood frames and tarps covering their sides (some even with DirectTV dishes on their roofs). Before the most recent state of emergency, bars, discos, and restaurants existed within the camps. In one, which has since been converted into a military base, prostibars—brothels—had recently lined the dirt pathways. 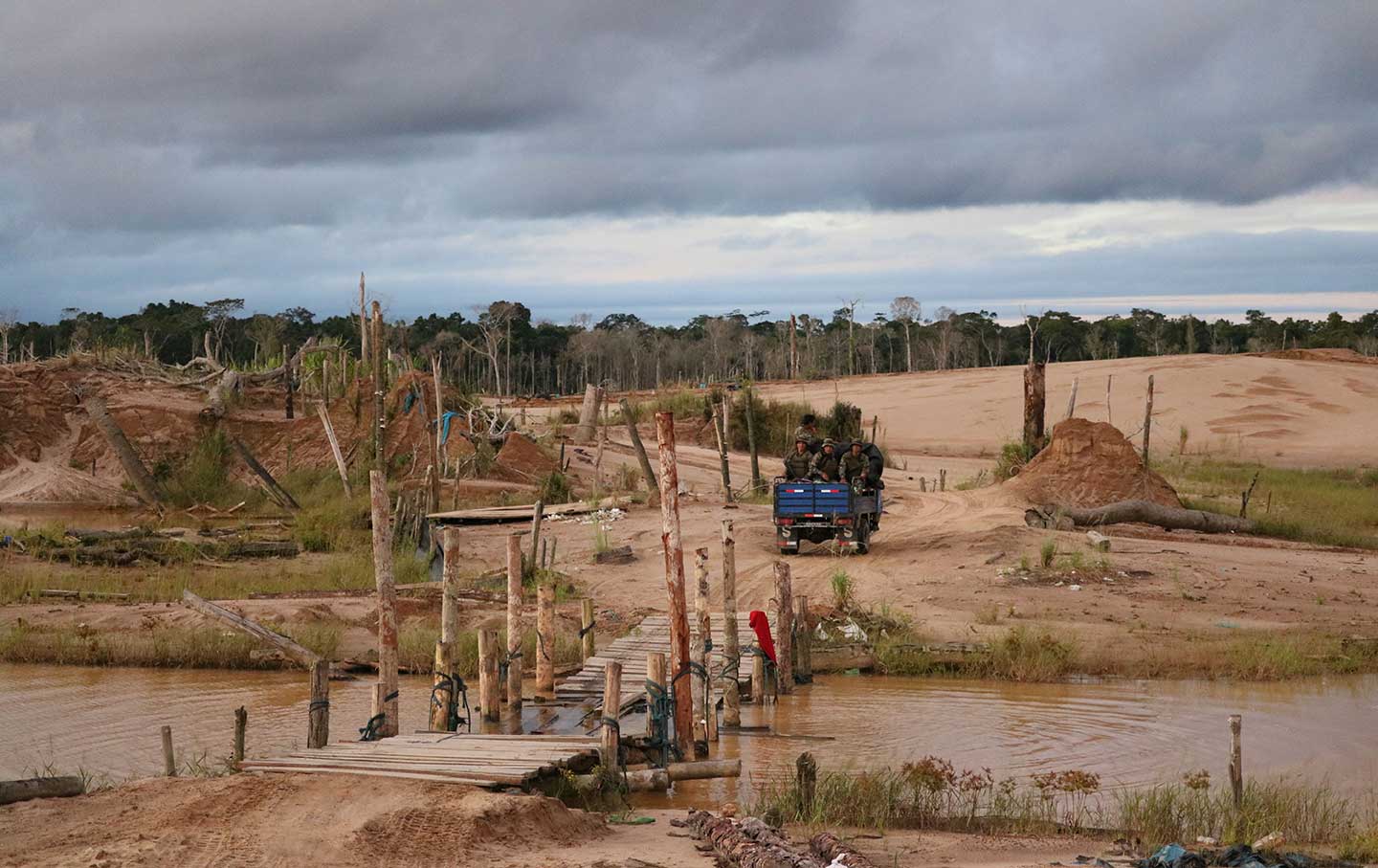 Peruvian forces return to base after a mission in La Pampa. (Leo Schwartz)

Most of the miners who had populated the camps were ordinary workers trying to make a living, often pushed by necessity into the precarious conditions of illegal, small-scale gold mining. A number of miners lived with their families—women and children also lived in La Pampa, though some had been brought forcibly by human traffickers. According to Colonel Jorge Antonio Cotito, the head of the national environmental police side of the operation, around 1,500 children lived in La Pampa before the state of emergency.

Gold and silver mining have remained constants throughout Peruvian history. In the 16th century, as the Spaniards pillaged their way throughout South America, they coopted the gold and silver mining of the Incas, who had subjugated local tribes into forced service (called mit’a). The Spanish adopted the system to supply labor to the silver mines of nearby Potosí, which would become the fourth-largest city in the Christian world a century later. Today, mining represents the country’s top export industry. In 2017, Peru exported $7.13 billion worth of gold—the most exported mineral after copper—comprising over 15 percent of its total exports. The country is now the seventh-largest producer of gold in the world. In 2015, before the crackdowns on illegal mining, it ranked fifth.

According to Jimena Diaz, a UC Berkeley doctoral student studying smallholder mining, the government created a bank in the 1970s to buy gold from small producers, to jump-start mining as part of a rural development strategy. Miners soon began arriving in Madre de Dios, Peru’s least populated state, where La Pampa is located, and before long, gold became central to the state—now home to almost half of the country’s small-scale gold mining. Its governor, Luís Hidalgo, recently claimed that 80 percent of local businesses are tied to the gold industry, and blamed the government’s crackdown on mining for pushing the region into a recession.

Despite the ubiquity of gold mining in Madre de Dios, the government has never succeeded in creating a sustainable, regulated industry. To operate legally, miners need formal licenses, which the government rarely grants out of a lack of political will. The state’s former governor, Luis Otsuka, was himself a gold miner and worked to block the influence of activists and NGOs, which he referred to as “environmental mafias.” During his administration, only two miners were ever officially “formalized”—many were stuck in a limbo state between illegality and formalization. Corruption was widespread: In April, six officials at the Regional Ministry of Energy and Mines, the agency responsible for approving licenses, were imprisoned and charged with accepting bribes from miners in exchange for expedited formalization under the Ostuka administration.

The current governor, Luís Hidalgo, is taking a different approach. Since he took office in January, he pledged to improve the licensing process and to formalize 120 miners within his first months in office—though, according to current estimates, only some 12 miners have been formalized. The state of emergency, which Hidalgo requested, also calls for direct investment from the government in the region in agriculture, fish farming, and tourism. In an interview with The Nation, Hidalgo said that through building a sustainable economy and establishing conservation efforts, the state aspires to be the next Costa Rica—a mecca for eco-tourism. He’s been working closely with NGOs and other organizations such as Wake Forest University’s Center for Amazonian Scientific Innovation (CINCIA) to build relationships with miners and implement more rigorous environmental impact assessments. But Jimena Diaz contends that the government’s interdictions are only pushing miners further into protected areas; the state of emergency only exacerbated their situation. 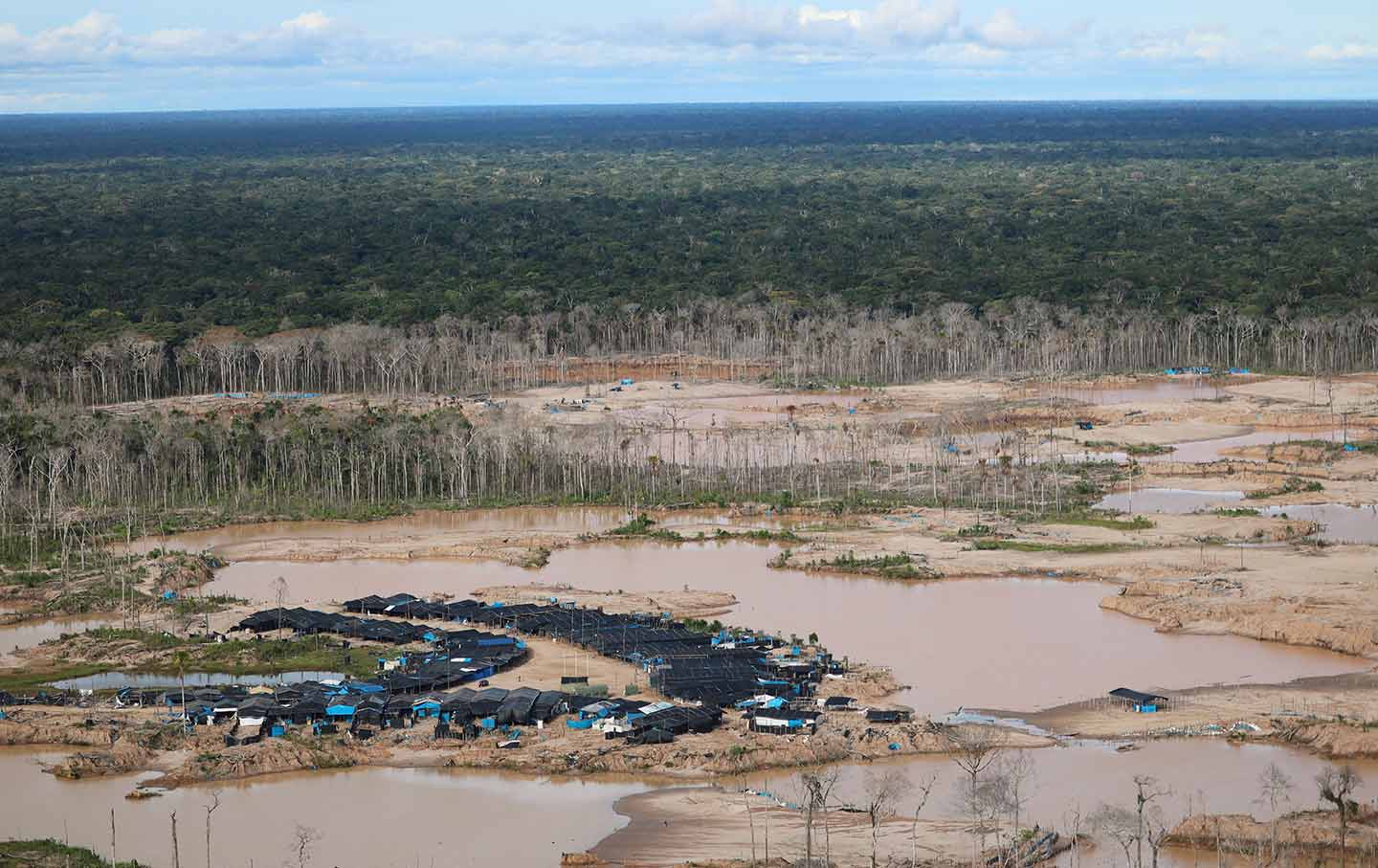 Balata, a mining town-turned-military base in La Pampa. (Leo Schwartz)

While effective, the ongoing state of emergency in Madre de Dios is only a short-term fix. Recently released data from the Monitoring of the Andean Amazon Project revealed that deforestation in La Pampa had in fact decreased by 92 percent between 2018 and 2019, from over 2,200 acres to just 165 acres. According to Governor Hidalgo, the previous state of emergency in 2016 failed because the military came in, blew up some miners’ equipment, and left, only for the miners to return. This time, he said, the Peruvian government and government of Madre de Dios has promised not only to maintain a military and police presence but also to invest in infrastructure and reforestation. But, according to CINCIA coordinator France Cabanillas, besides the military operations, there’s been little in the way of government initiatives in La Pampa.

Small-scale gold mining, of course, is not limited to Madre de Dios. A map released by the Amazon Socio-environmental, Geo-referenced Information Project in 2018 showed rampant mining in 245 areas across six Amazonian countries. Each country is tackling the problem differently. In Colombia, where illegal mining is the largest cause of deforestation, the government has passed strict laws policing the use of mercury and mining operations. Venezuela, which has the highest number of mining sites, has shown interest in expanding gold mining, but has been largely powerless in the face of armed groups. In Brazil, President Jair Bolsonaro counts on small-scale miners as part of his base, and has also signaled a desire to expand mining. He frequently targets Indigenous communities in his rhetoric and through anti-environmental policies—much of the country’s recent deforestation has affected indigenous reserves. Along with the ongoing fires, a new gold rush has exacerbated widespread deforestation.

Peru, therefore, has an opportunity to lead the region in efforts to curb illegal gold mining. But the government’s current strategy is not enough, as extractives analyst Matthew DuPée has written for World Politics Review. Illegal gold mining, and gold mining in general, will continue as long as gold prices are high and labor is cheap. Thus, the country is stuck in a sort of purgatory: International pressure pushed Peru into declaring a state of emergency, but gold prices driven by markets in the United States and other developed countries keep mining lucrative enough for miners to risk operating illegally.

“Unfortunately, the information that arrives to the United States and to Lima is that all the miners are demons who depredate the jungle, throw mercury everywhere, and work with child prostitution,” Cabanillas said.

The miners in La Pampa do contribute to deforestation and environmental destruction, but they risk mercury poisoning, military raids, and mafia violence for a few grams of gold.

According to Diaz, there’s no perfect win-win scenario—any solution involves balancing environmental interests with the acknowledgment that mining remains the livelihood of many regions like Madre de Dios. Still, mining can occur more sustainably, both for the environment and for the miners themselves. Such an approach would involve partnerships with groups like CINCIA to help improve mining practices and reforestation, as well as a more streamlined licensing process so miners are not forced into illegality. 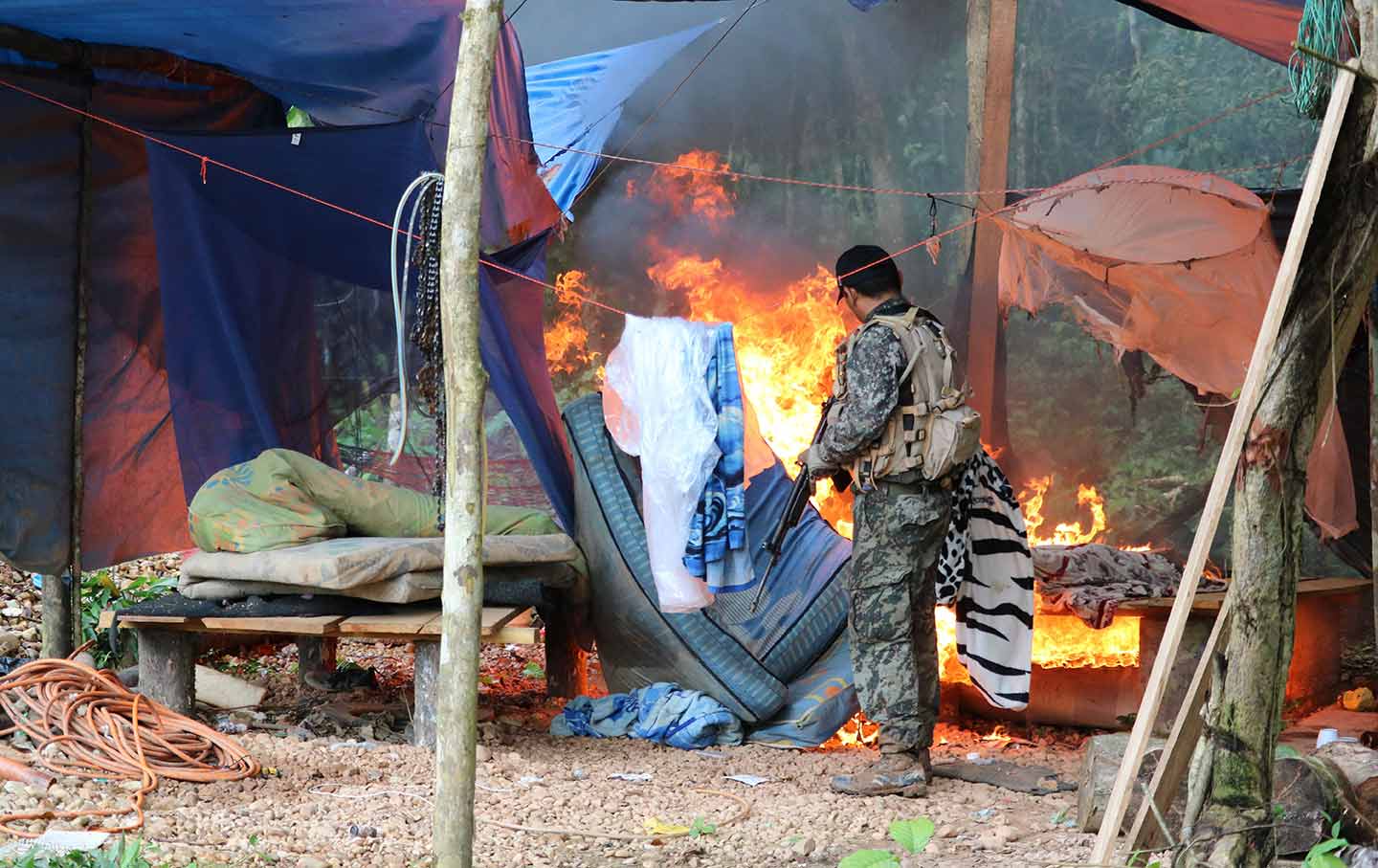 A Peruvian official oversees the burning of a mining encampment in La Pampa. (Leo Schwartz)

For now, the government will continue interdictions. And despite the state of emergency, miners still operate as covertly as possible. During one of the government’s stings, at a clearing with a few scattered lean-tos, soldiers flanked the huts with drawn pistols. The miners inside surrendered without a fight. One of them, a young man, led the officers to their nearby workstation: a raft covered with machinery sitting in a muddy, brown lake. For the next hour, officers scrambled down PVC pipes leading to the raft and strapped explosives to every visible piece of equipment until the dynamite was ready. During the detonation, a plume of dense black smoke surged into the sky. The raft was in flames, and the area reeked of burnt plastic and metal.

Eventually, the officers and miners walked back to the mining camp, where the other three miners—a man and two women—were still standing around. The soldiers instructed them to take whatever belongings they could carry—some clothing, a chainsaw, and a pet dog. The rest was doused in gasoline before one of the officers flicked out his lighter and ignited it. The officers threw the rest of the belongings on the fire: mattresses, blankets, cooking equipment. The point of the interdictions, it became clear, was not only to remove the miners and destroy their equipment, but also to ensure that they would never return. The four miners in tow began the trek back through the jungle as their possessions blazed behind them.