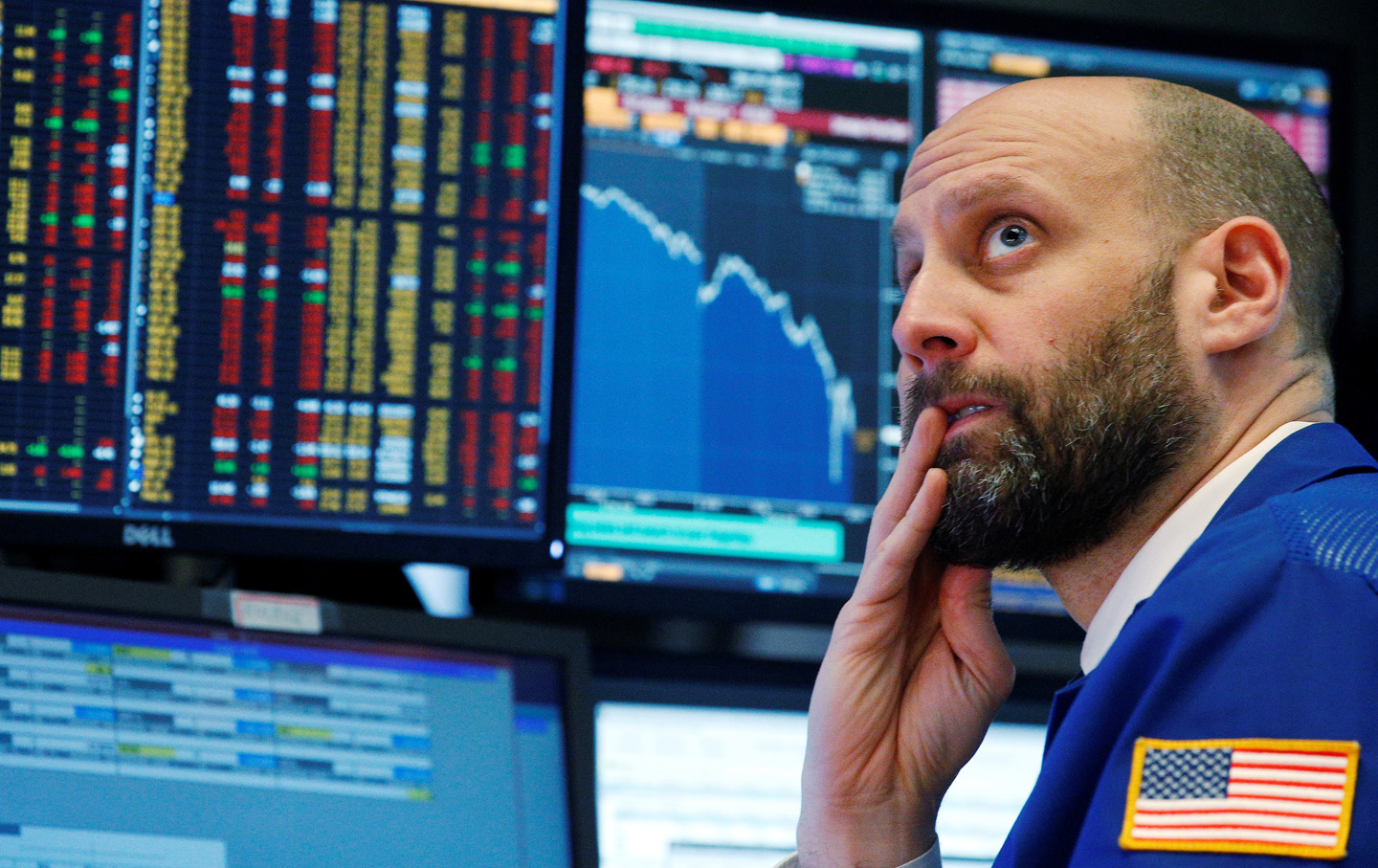 Any number of opinionators have claimed that one of the best ads during Sunday’s Super Bowl was discount broker E-Trade’s “This is Getting Really Old.” The commercial featured a number of elderly people—including DJ Nana and a lifeguard in Savannah—still on the job and singing, “I’m 85 and I want to go home,” to the tune of Harry Belafonte’s Day-O (The Banana Boat Song). “Over 1/3 of Americans have no retirement savings. This is getting old,” flashes across the screen. Then a voiceover: “Don’t get mad. Get E-Trade.”

The timing, shall we say, was not felicitous. The Friday before the ad ran, the Dow Jones dropped a you-can’t-make-this-up-it’s so-symbolic 666 points. The Monday afterwards, it dropped another 1,175 points, erasing all the gains made by the index since the beginning of the year.

Anyone watching the news as the stock market careened could hear panic in voices of many anchors and guests. It’s hard not to panic, especially if you hear phrases like “largest one-day point drop in history” and “stock market in free fall” on television over and over again. But I don’t blame TV for riling people up. I blame the age of financialization, which promotes individual stock-market investing as the solution for any number of personal financial woes.

Nowhere is this clearer than in the realm of retirement savings, the subject of the E-Trade ad. You know the tale. Once upon a time, a decent percentage of American workers could expect to retire with a pension. But the Individual Retirement Account came into being the 1970s and the 401(k) in the 1980s. They were meant to supplement pensions, not replace them. But that’s not how it worked out. Companies, for any number of reasons, began to freeze and end pension plans, seemingly en masse, tossing people to the mercies of defined contribution plans.

A chorus of financial cheerleaders quickly emerged, predicting great things. “Investing in a 401(k) is a pretty easy way to make a million bucks by the time you retire,” proclaimed Kiplinger’s magazine in 2007. Well, maybe, if you are an upper-middle-class professional who experienced few if any career-related setbacks.

At least a third of workers don’t have access to a retirement plan at work. As for the rest, many aren’t exactly putting away the sums that could make them millionaires. Polls repeatedly show Americans are all but petrified of running out of money in retirement—and for good reason. According to Fidelity, the average balance in a 401(k) or IRA account is about $100,000. It’s not nothing, but it’s a far cry from seven figures.

Predictions of a future retirement crisis—à la the E-Trade commercial—are all but constant, and that’s when the going is good. Polls also show a majority of Americans say they plan to work past the traditional retirement age of 65. E-Trade not withstanding, that’s also not the most realistic of plans. Studies show all too many of us will leave the workforce earlier than planned and less than willingly, because of either the ill health of ourselves or a family member, or of downsizing.

No surprise, retirement turned out to be something of an issue in the 2016 presidential campaign. Hillary Clinton promoted a plan to expand benefits so Social Security paid more money to people who lost a spouse, as well as offer credits for unpaid care-taking. As for Donald Trump, he stood out on the Republican side as being one of the few candidates who repeatedly swore he would not touch Social Security. (I’ve always been convinced that one reason Trump ended up as Republican nominee for president while both Jeb Bush and Marco Rubio did not was that they talked about cutting Social Security.)

Of course, in office, Trump has repeatedly taken credit for the stock-market gains of the past year. It even came up in last week’s State of the Union speech. “The stock market has smashed one record after another,” he said during his address. “That is great news for Americans’ 401(k), retirement, pension and college savings accounts.”

And on one level, that’s true. The Dow—still!—remains up by more than 20 percent since Donald Trump took office. News flash: If you have money in the markets, you almost certainly still have much in the way of potential profits when you sell one day. Whatever you do, don’t sell now, in a panic! There’s also the fact that the stock market is not the greater economy. It’s quite possible—nay, make that likely—that this means nothing for your salaried earnings potential.

But, again, it’s also true that all too many of us don’t have enough saved for retirement, or, for that matter, to pay for college, where tuition costs have outpaced the increase in the overall cost of living, not to mention salary gains, for decades. When the stock market is presented as our best chance to make good on all of this, it’s only human to get concerned. E-Trade’s got it wrong. We should get mad. We deserve better than this.