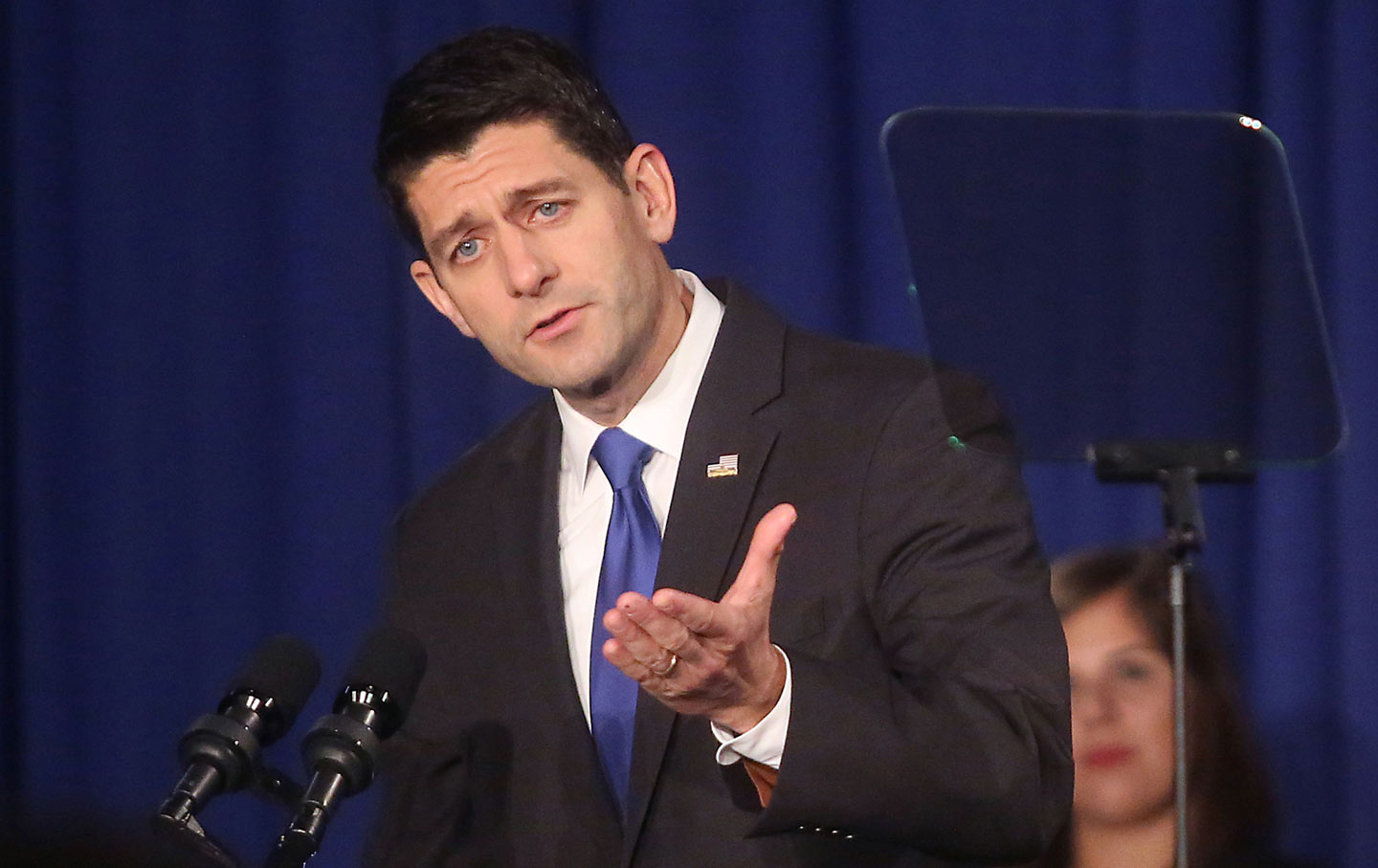 Paul Ryan is famously described as what Republicans think a smart person sounds like. But sometimes the speaker of the House outsmarts himself.

Ryan lectured Young Republicans in his native Wisconsin last Friday, and the national news media were invited to listen along. The speaker wanted to make the case for Republican voters to turn out and back GOP congressional candidates, even if they can’t stomach their party’s scandal-plagued presidential ticket. Implicit in Ryan’s argument was the suggestion that a Republican-controlled House of Representatives and Senate could be counted on to obstruct Hillary Clinton’s supposedly “liberal progressive” agenda.

But in a question-and-answer session following his unremarkable speech, Ryan inadvertently made a case for liberals and progressives to turn out in big numbers in order to elect Democratic candidates in the fight for control of the Senate.

As he outlined his Wall Street–friendly proposals for tax reforms that would more rapidly redistribute wealth upward, and for budgets that would put vulnerable Americans at greater risk while increasing burdens for middle-class families, the speaker explained that his agenda can advance only if Republicans control both the House and Senate. “If we keep control of the Senate in the Republican hands…a nice guy named Mike Enzi from Wyoming is the Senate budget chair and he helps us get these budgets to the president’s desk, gets these tax bills through,” he said.

On the other hand, Ryan warned, “If we lose the Senate, do you know who becomes chair of the Senate Budget Committee? A guy named Bernie Sanders. You ever heard of him?”

Ryan’s comment drew a tepid response from the Young Republicans he was lecturing. No surprise there. Polling suggests that Bernie Sanders is among the most well-regarded political figures in the country, especially among younger voters, and the long-time independent generates far less partisan antipathy than veteran Democrats.

But when word got out that Ryan was rattled by Sanders, the response from around the country was electric. People who might have been having a hard time getting excited about the presidential race were most intrigued by the possibility that Sanders might become a powerhouse in the Senate.

The possibility is real enough.

“Too bad for Ryan, that's a scenario millions of millennials would welcome.”

The senator from Vermont is the ranking member of the budget committee, and if Democrats gain control of the chamber on November 8, he would be in line to chair it. But Sanders could also end up chairing then powerful Senate Health, Education, Labor, and Pensions (HELP) Committee, which he could use to advance many of the proposals (for affordable college, empowering unions, and investing in public-health programs) that made his bid for the Democratic presidential nomination so popular.

The final list of committee assignments will be influenced by the choices of senior senators, such as Washington’s Patty Murray. “There’s lots of individual choices ahead, of people who are senior to Bernie,” says Senator Charles Schumer of New York, who is set to replace retiring Senate Democratic leader Harry Reid of Nevada. Yet Schumer says of Sanders, “He will chair a significant committee if we win the majority.’’

But it excites a lot of other people.

Because Ryan’s Friday event—at which he avoided mentioning the candidate he has endorsed for the presidency—was otherwise devoid of news, the speaker’s reference to Sanders got a good deal of attention. Reporters tweeted about Ryan’s comments regarding the Vermonter, and made mention of them in articles on an otherwise inconsequential event.

The response was immediate—and enthusiastic.

The news that Sanders might end up in a top position in the Senate, and that he might be positioned to thwart Ryan’s plans, became a digital sensation. Twitter and Facebook exploded—with messages like “Awesome!” and “Sounds like a plan!” and “Too bad for Ryan, that’s a scenario millions of millennials would welcome.”

Sanders fans created images of the Vermont senator with the Ryan quote superimposed on it, and bloggers mocked the speaker’s “doomsday scenario” with assessments like this Daily Kos observation: “Good god, people! Sanders might try to expand Social Security. He might look for ways to ease the burden of college debt. By god, he had a ‘Medicare for All’ platform. Just think of it: Insured people everywhere! Talk about an apocalypse!”

Of course, liberals and progressives understand that an empowered Bernie Sanders is no doomsday scenario, no apocalypse. For them, it’s a thrilling prospect that builds enthusiasm for voting—and perhaps for volunteering. Even among young voters are not all that thrilled with the prospect of a Hillary Clinton presidency, the prospect of Bernie Sanders writing budgets and setting national priorities is, well, “awesome.”

So Democrats will undoubtedly be pleased if the speaker keeps talking about the Sanders “threat.”

Paul Ryan is making a muscular case for why control of the Senate should be grabbed away from right-wing Republicans and handed over to a party that plans to put Bernie Sanders in a position of power.