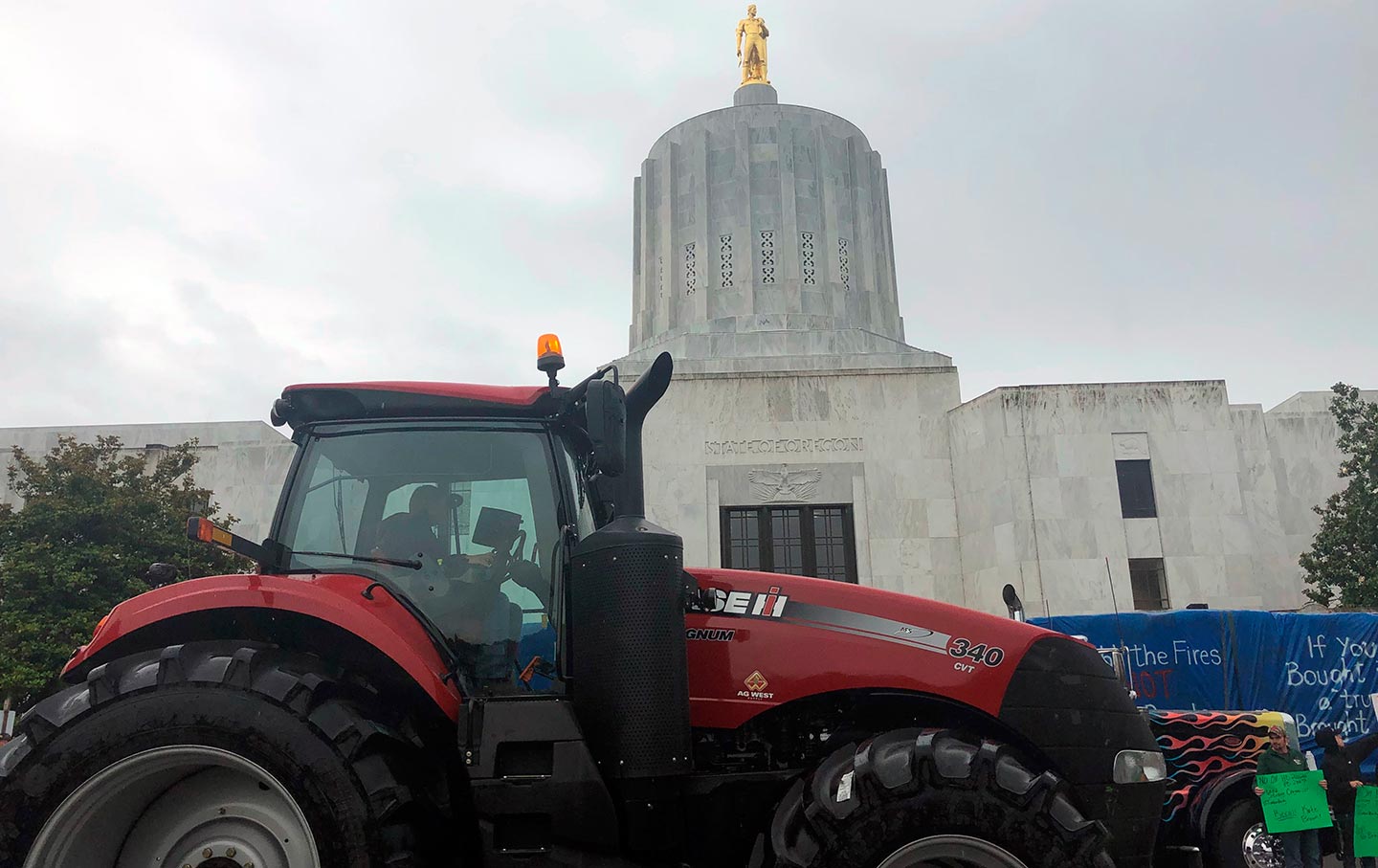 For a brief moment, the standoff in Oregon over climate change legislation seemed like an amusing bit of Wild West political theater. Last week, rather than stomach a losing vote on the bill, Republicans in the state Senate escaped—scattering to Idaho, according to rumors, maybe Montana—to deny Democrats a quorum, which is required to pass any legislation. When the governor threatened to send state troopers to bring them back to work, one of the “Absent Eleven” threatened violent resistance: “Send bachelors and come heavily armed,” blustered Brian Boquist.

It’s clear now that the situation in Oregon is a deeply unfunny story about the power of corporate interests and a small group of ideologues to squash legislation more than a decade in the making. On Tuesday morning, with the Republican members still in hiding, Democratic Senate President Peter Courtney announced that the bill was as good as dead. “House Bill 2020 does not have the votes on the Senate floor. That will not change,” he said.

How did this happen? Let’s start with the legislation, which shares a foundational principle with the Green New Deal: that corporate polluters should help pay for the transition to a clean economy. Referred to as a “cap and invest” policy, the measure would have put a statewide limit on carbon emissions, forcing Oregon’s largest polluters to pay for emissions allowances. As the statewide ceiling gradually lowers, corporations would have to cut their own emissions or buy more credits on a regional carbon market known as the Western Climate Initiative, which includes California and Quebec. The revenue raised from this pricing scheme would be directed to clean-energy infrastructure and jobs programs. Advocates hoped Oregon would set an example for other smaller states—that it would prove the viability of cap-and-trade outside California, which has the advantage of having the world’s fifth-largest economy.

It’s not surprising that Big Business would fight this proposal. Corporations are used to being able to pollute for free, and they’d like to keep doing so (though it’s worth noting that many of the state’s businesses, including Nike and Adidas, do support the legislation, as do some of the state’s largest timber owners). Fossil fuel interests in particular view state-level climate initiatives as a serious threat; last fall they spent a record $30 million to defeat a carbon tax in Washington state.

In Oregon, these corporate interests have a cozy relationship with lawmakers. The state has some of the weakest campaign-finance laws in the country, imposing no limits on what corporations and individuals can contribute to candidates. (Only four other states are so permissive.) Between 2008 and 2016, corporations and industry groups accounted for almost half of all money raised by state legislators, dwarfing contributions from unions and individual donors; Oregon now ranks sixth for the total amount of corporate money given per lawmaker and first in per-capita corporate giving. According to an 18-month investigation by The Oregonian’s Rob Davis, industry has leveraged these donations to gut or block a number of environmental regulations. As a result, the state’s environmental protections are now far weaker than those of neighbors Washington and California.

The 11 missing GOP senators have particularly strong ties to industry players fighting the cap-and-trade bill. More than 65 percent of their campaign funding has come from corporations, including Koch Industries, whose subsidiary Georgia-Pacific operates mills that would be regulated under the cap-and-trade bill. According to Davis’s calculations, over the last decade companies affected by the legislation have given $117,619 to the campaigns of the 11 senators who fled, compared to $43,250 to current Democratic state senators.

Corporate influence doesn’t only affect Oregon’s Republicans. An extra blow to the climate bill appears to have been delivered by a single Democrat—Laurie Monnes Anderson, who represents a suburban district just east of Portland and was expected to be the final critical vote in the bill’s favor. But this week she reportedly made it known she would not support the legislation, apparently out of deference to Boeing, which operates a factory in her district and lobbied against the bill. (On its website, Boeing says, “Climate change is a serious environmental challenge that requires credible action.”) Although Boeing wouldn’t be directly regulated by the measure, the company said in a statement that it was worried about higher energy costs. “I’m fighting for Boeing because they’re in my district,” Anderson had told a reporter a few weeks ago.

Predictably, the bill’s opponents have framed the policy debate as a battle in an old culture war, one fought between the urban, mostly liberal I-5 corridor and the state’s rural, largely conservative expanses. The villains in this narrative are out-of-touch Democrats using their legislative supermajority to run roughshod over loggers, ranchers, and other working people, while the corporations actually affected by the regulation are largely invisible. On Thursday, streets approaching the state capitol building in Salem, Oregon, were clogged with logging trucks honking their horns in protest. Members of the III% militia were spotted on the capitol steps in black sweatshirts. (Law enforcement canceled a planned legislative session last Saturday over what it considered a credible militia threat.) “This state was built by the timber industry and by farms, ranchers, construction, and other blue collar industries,” the sheriff from a rural southern Oregon county told the crowd. “Not on coffee businesses and marijuana dispensaries.”

A key organizer of Thursday’s protest was a newly formed group called Timber Unity, which describes itself as a grassroots effort but also has connections to Andrew Miller, the CEO of Stimson Lumber and a wealthy conservative donor in Oregon. Miller is one of the leading opponents of the cap-and-trade bill, and he provided the largest donation to Timber Unity’s new PAC. (Willamette University professor Seth Cotlar has more on the significance of Timber Unity here.) In May, Miller’s company announced that it would lay off 60 people at one of its Oregon mills in response to a new tax increase to fund schools, a clean fuels program, and the cap-and-trade proposal.

In reality, the lines of allegiance are not as neatly divided as they appear. The timber industry is not a monolith, and some of the state’s largest forestland owners wrote letters in support of the cap-and-trade bill. While Republicans accused Democrats of ignoring the concerns of stakeholders and shutting Republicans out of the legislative process, the final version of the legislation included a number of exemptions for business, as well as rebates to help low-income Oregonians deal with the expected rise in fuel prices. The bill also targeted some of its investments directly to timber, ranching, and farming communities. Meanwhile, a few progressive groups opposed the bill because of its focus on market mechanisms, with local chapters of 350.org and Democratic Socialists of America remaining neutral. Any serious policy to reduce carbon emissions involves real trade-offs—but ultimately a serious debate about those choices was superseded by a public drama.

The conflict carries obvious echoes of the Bundy brothers’ takeover of the Malheur National Wildlife Refuge in 2016. On display is a similar antidemocratic belligerence, a willingness to resort to dramatic gestures and threats of violence to get one’s way. This is not so much a local phenomenon as an ascendant mood on the right nationwide, one that President Donald Trump embraces. (The Bundy occupation was initiated almost entirely by non-Oregonians, and was not warmly embraced by locals.) Republicans have tried to shield themselves from electoral accountability through various means of rigging the system, from gerrymandering to more overt voter suppression. With those options out of reach in Oregon, lawmakers simply ran away. And not for the first time: Earlier this year Republicans used the same tactic to block a tax bill, returning only after making a deal that Democrats would shelve unrelated vaccine and gun safety bills in exchange for a promise from the GOP that they wouldn’t walk out again this session. So much for that.

The implications for the future of climate policy-making are not encouraging. Supporters of the cap-and-trade bill did everything “right”: They assembled a broad coalition, worked with representatives friendly to their cause, and engaged in a complex legislative process. Democrats organized and won a supermajority in both chambers of the state legislature. That our political institutions are ill-equipped to grapple with the complexity of climate change is not a new conclusion. But events in Oregon suggest that even modest progress via democratic processes could become all but impossible so long as corporate-backed politicians are willing to play dirty.

The story isn’t completely over in Oregon. When Republicans fled, they left in limbo not only the climate bill but dozens of other pieces of legislation, including campaign finance reform measures, a tax break for low-income Oregonians, and billions of dollars in budgeting items for services like fire suppression. On Friday morning, Republican Senate leader Herman Baertschiger returned to the capitol building and said that he and his colleagues would be at work on Saturday morning. Fittingly, Baertschiger was joined in the caucus office by an industry lobbyist.