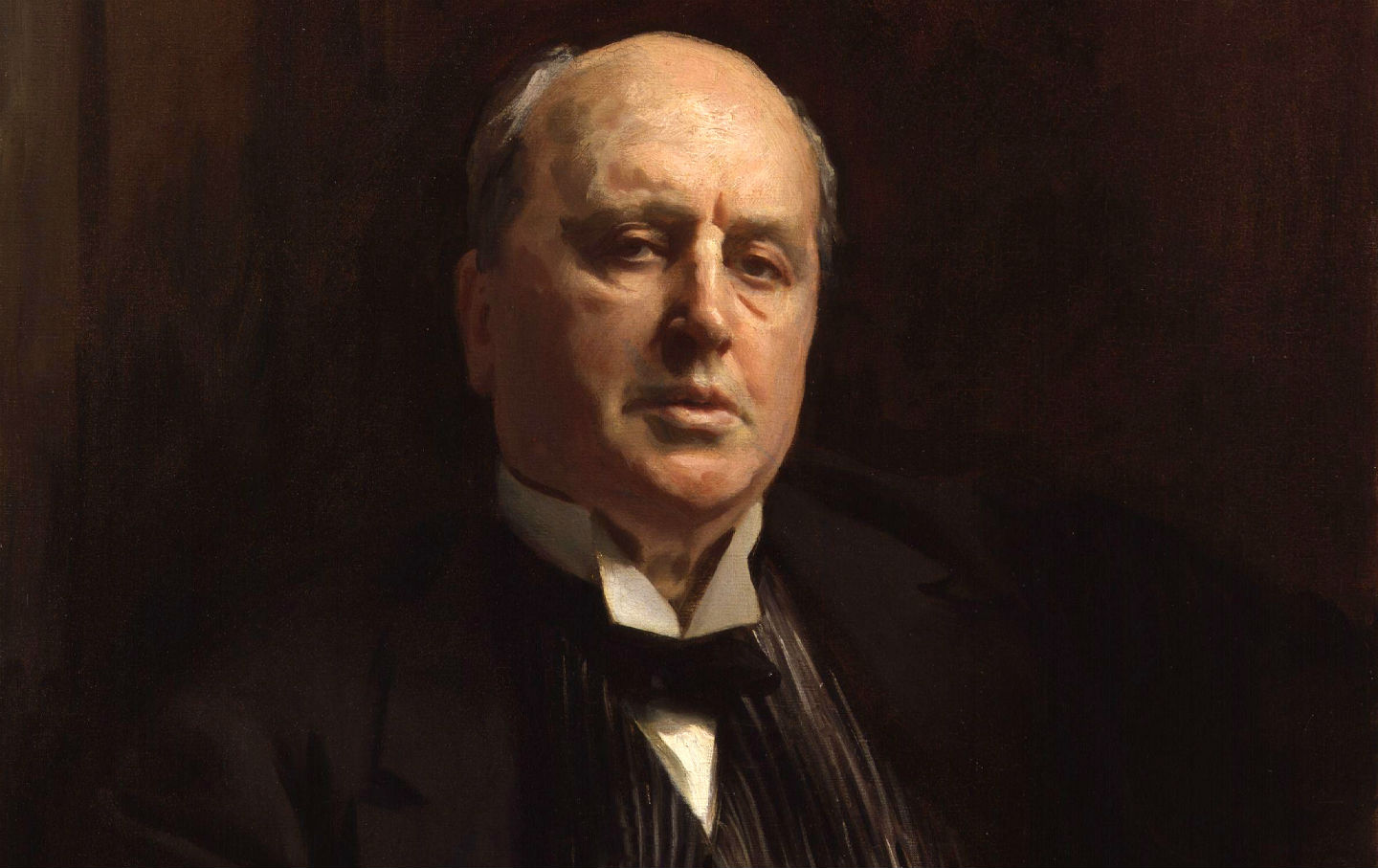 Henry James, who wrote an article for the first issue of The Nation. (National Portrait Gallery: NPG 1767)

The fiftieth anniversary of The Nation came at a time of transition for the magazine. The old order had fallen away and a new one had not yet taken its place. A flashy rival with a name almost as ridiculously ambitious as its own had just months earlier appeared on the scene: The New Republic threatened to make the scholarly Nation look even more out of touch, irrelevant and conservative than it already was. The Nation’s founding editors, E.L. Godkin and Wendell Phillips Garrison, had died a decade earlier, and Oswald Garrison Villard—son of the railroad magnate who bought The Nation in 1881, and himself a prominent journalist and co-founder of the NAACP—had not yet taken over the editorship of the weekly and steered it sharply to port, as he would in 1918.

After providing the usual round-up of the week’s news, mostly involving the debate over American neutrality in the World Wa, the issue got down to business.

An editorial on “The ‘Nation’s’ Jubilee,” began:

Those to-day responsible for the conduct of the Nation look back to its fifty years of life with a kind of proud humility. The secure past is not theirs, yet they, as inheritors of a high tradition, must not discredit it. As they think of the men who conceived the Nation and nourished its early years—both editors and contributors during the time when its fame was solidly built up—the sensation is like that of one walking through a gallery of the portraits of his famous ancestors—his, if he lives worthy of the name they bequeathed to him; not his, if he fastens disgrace where they stamped only honor.

Only honor—as we have regularly covered on this blog and in the magazine, there is much besides honor evident when one peruses the bound volumes of The Nation from the first fifty years. Virulently anti-labor; racist to the point of regretting the Fifteenth Amendment; conservative by disposition and largely reactionary in ideology; profoundly anti-imperialist, yes, but often on the grounds that it was beneath Americans to consort abroad with some of your lesser races, whose potential for advancement and civilization was negligible and not worth the bother anyway—The Nation after roughly 1870, when it ditched the cause of Reconstruction, was stamped with plenty of dishonorable associations. On top of all that, H.L. Mencken once wrote that The Nation of the early 20th century was the most boring publication that had ever been published anywhere in the world.

In 1915, the magazine was still in the hands of deeply conservative gentlemen—one editor was a renowned Sanskrit scholar—and labored only to make themselves worthy of the legacy. The 50th anniversary issue is almost obsequiously dedicated to this single purpose.

“This number of the Nation is largely given up to memory,” the editors wrote. “but hope is interfused. Coming days are to be fronted bravely. An institution like the Nation is self-renewing.”

Amid the tributes of aging publishers, English viscounts and distinguished professors, one essay in the issue stands out: a brief memoir by Henry James, who at only 22 years old had written an article for the first issue, and had contributed hundreds of reviews and travel essays in the ensuing decades. Near the beginning of his 1915 essay James pinpoints, as closely as his roundabout late style allowed, the pleasures offered by perusing The Nation’s archives from its earliest years:

They were, they flourished, they temporarily triumphed, that scene, that time, those conditions; they are not a dream that we drug ourselves to enjoy, but a chapter, and the most copious, of experience, experience attested by documents that would fill the vastest of treasure-houses. These things compose the record of the general life of civilization for almost the whole period during which men of my generation were to know it.

He then described Godkin’s visit to the James home on Boston’s Ashburton Place, behind the Massachusetts State House, in the spring of 1865, when Godkin asked the young, almost entirely unpublished James (who, here, conspicuously doesn’t mention that Godkin was probably even more interested in visiting Henry James Sr.) to contribute to the new weekly:

The verb to contribute took on at once to my ears a weird beauty of its own, and I applied it during that early time with my best frequency and zeal…I was very young and very willing, but only as literary and as critical as I knew how to be—by which I mean, of course, as I had been able to learn of myself…That winter of Ashburton Place, the winter following the early summer-birth of the confident sheet, fairly reeks for me, as I carry myself back to it, with the romantic bustle of getting my reviews of books off.

Next we’ll peruse the sixtieth anniversary issue, published in 1925, with contributions by Zona Gale, Sinclair Lewis and, among others, H.L. Mencken, whose comment about The Nation’s early-century dullness was followed by the claim that when Villard took over the publication in 1918, he “threw out the trash and started printing the truth.”