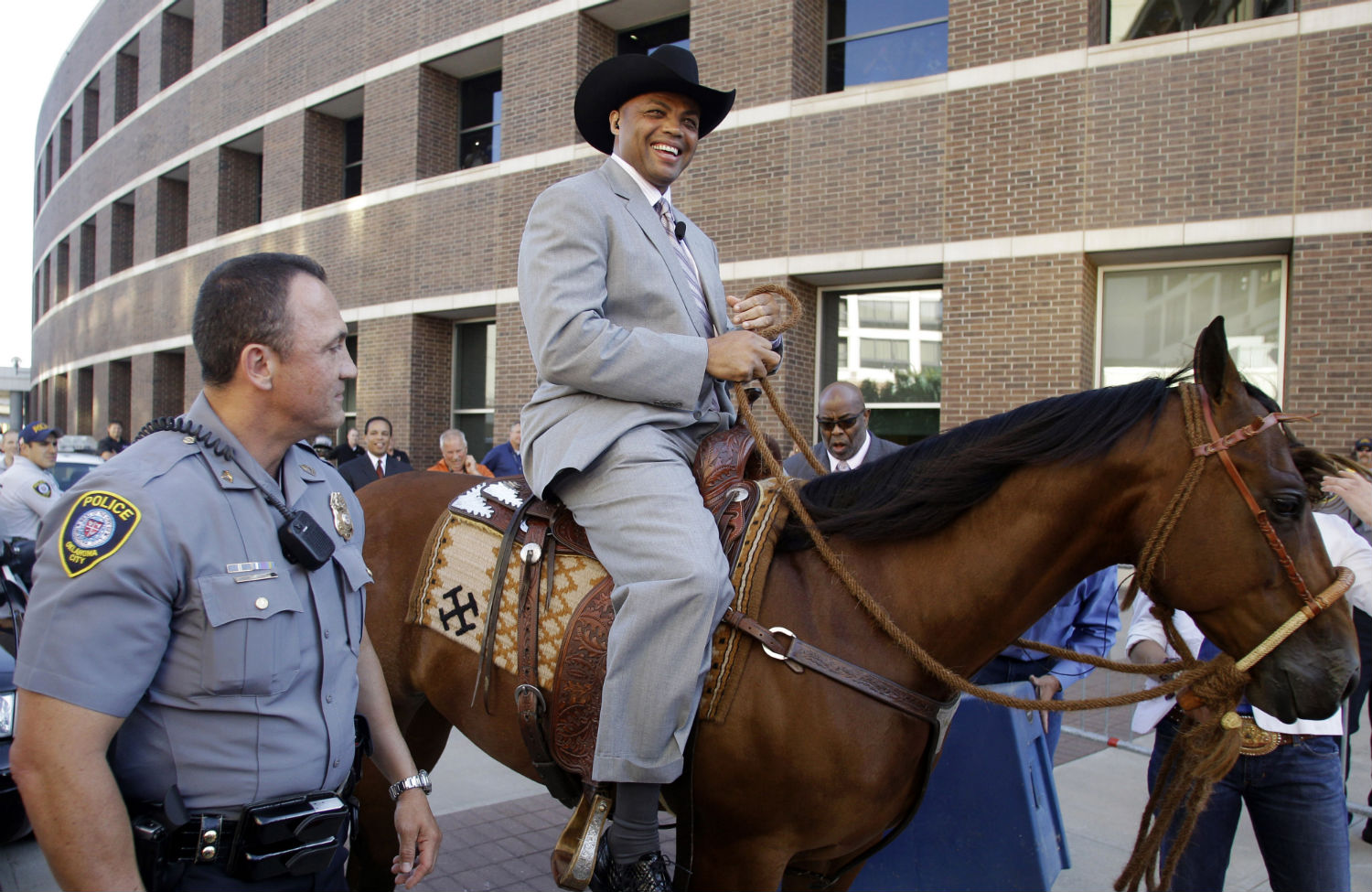 Let me say first that you are among the basketball greats. I remember rooting for you in the ’93 Championship Series against the Bulls along with one of my hometown heroes Richard Dumas. You have achieved a level of success on the court that will be cemented in the basketball history books permanently. Eleven NBA All-Star Game appearances, twice All-Star MVP, once voted NBA MVP, one of the 50 Greatest Players in NBA History. Dream Team, two-time inductee into the Naismith Memorial Basketball Hall of Fame. You are basketball royalty.

Your book Who’s Afraid of a Large Black Man? is sitting on my bookshelf right now. It’s a powerful book that takes on the issue of race and racism in a way that many would’ve shied away from.

“Racism,” you said, “is the biggest cancer of my lifetime. And I know I can’t cure the cancer, but doesn’t somebody have to attack it?”

In Who’s Afraid of a Large Black Man? you compiled a very impressive list of fascinating opinions and personal stories from then-Senator Obama, Michael Wilbon, Tiger Woods, Morgan Freeman and many other famous personalities on their ideas about race and other issues in America. Your words were to the point, with little of your trademark humor. It’s clear that the audience you most hoped to reach with this book were young black men and women, and I commend you for using your celebrity status and influence to positively effect black youth.

You have never been afraid to speak your mind and I commend you for that. But with that comes great responsibility.

During an interview on 97.5 The Fanatic in Philadelphia, the day after the Ferguson decision was announced, host Mike Missanelli asked you to express your thoughts about it and why “black America” didn’t trust the ruling. Your response was quite surprising to me. You said: “The true story came out from the grand jury testimony.” You explained that you were made aware of “key forensic evidence, and several black witnesses that supported Officer Darren Wilson’s story…”

You went on to say:

You continued to refer to the Ferguson looters as “scumbags,” and further praised police officers who work in black neighborhoods, and reiterated that you support the decision made by the grand jury not to indict officer Darren Wilson in the Michael Brown shooting.

Mainstream America was falling over themselves with joy at your statements. They couldn’t be happier.

The headline from Young Conservatives read, “Charles Barkley Speaks The Truth about Ferguson, Calls Out Media, And It’s Epic.”

When the wolf begins to praise the sheep, it would be wise for the sheep to undergo some serious self-evaluation.

The fact that they were praising you should have made you take a long look in the mirror. I’m not going to disrespect you by calling you an Uncle Tom or putting up a big picture of Samuel L Jackson from Django Unchained, nor am I writing this to “slam” you, although I am sure many writers will attempt to frame it this way. I respectfully disagree with a position that you have every right to take.

The reason why your latest comments were so surprising for many in the black community is because they appeared to echo Bill O Reilly, Sean Hannity and the rest of Fox News. That’s not what we expect from Sir Charles.

It’s like in Animal Farm where the other animals looked in the window and the pigs were walking upright like the evil humans.

Sir Charles should never appear to be taking on the characteristics of Rush Limbaugh.

This wasn’t the first time either. I did a double take after your statements after the Trayvon Martin verdict. I actually thought I was reading one of those satire articles when you told host Maria Bartiromo on CNBC’s Closing Bell: “That’s probably not a popular opinion among most people. But just looking at the evidence, I agreed with the verdict.”

You went on to say, “I don’t think that guy [George Zimmerman] should have gone to jail for the rest of his life. Because something happened bad that night.”

As a result you will be praised by many who search for a black face to reference who is in agreement with their regularly pushed agendas. It’s the “Rudolph Guliani and cops are always right and the black community is always deserving to be treated as criminals” doctrine.

They’re going to invite you to speak on all of their shows and attend their events. You’ll be awarded admission into their extra “exclusive” golf club memberships. They may even ask you to publicly endorse Ben Carson. You’ll be the “voice of black America” on their shows. It’s like the Don Lemon fast-track to stardom playbook.

You’ll get more commercials, movie roles… hell, we may see you running through the airport jumping over suitcases or starring in the modernized Naked Gun movie with Tucker Carlson as Leslie Neilson. (Just be careful, because all that love and admiration could dissipate in a flash.)

How much confidence can you have in a decision to not indict Darren Wilson when the leading prosecuting attorney was Robert McCulloch, who has never in his entire twenty-three-year career indicted a police officer for killing someone in the line of duty? This was the fifth grand jury McCulloch presented evidence to in a police shooting, and still not a single indictment. And there are other reasons to question this outcome. This PBS Newshour chart shows that sixteen of eighteen grand jury witnesses testified that Michael Brown had his hands up when he was fatally shot.

But there is a reason people are hostile. There have been fourteen black teens killed by police since Mike Brown. Twelve-year-old Tamir Rice killed in Cleveland, 14-year-old Cameron Tillman in Louisiana, VonDerrit Myers Jr. not far from where Mike Brown was killed, 18-year-old Jeffrey Holden in Kansas City.

In addition, a never-ending reel of police brutality and beatings is constantly shown on social media. And, in most cases, fails to result in any type of punishment for the cop. They typically are put on paid administrative leave (as was Darren Wilson for over 100 days), which is in essence a paid vacation, and yet you have the nerve to praise the police as a whole for their work in the black community ?

And while we don’t condone breaking the law, burning or looting, let me remind you of a quote from Dr. King, who said, “A riot is the voice of the unheard.”

You have to take into account the everyday living and existing in a state of inequality that has led to the riots. The outrage and disgust of feeling helpless. A community who sees no justice. You’re focused on the reaction and not the cause of the reaction.

Dr. King also said, “Our greatest stumbling block toward freedom is not the Ku Klux Klan, it’s the white moderate who are more devoted to ‘order’ than to justice.”

Why do you think President Obama asked for $263 million to provide police departments with body cameras? Because sometimes the “scumbags” are in fact the ones with the badge and the ones deserving praise are the ones in the black communities who survive them.

So, as a federal investigation by the Justice Department into the shooting death of Michael Brown continues, in addition to an investigation into allegations of unconstitutional policing patterns and practices by the Ferguson Police Department; and with the inconsistent officer testimony to the grand jury and the continuing mistrust between the black community and the police in mind, you can understand why your statements disappointed, angered, sickened and disgusted many in the black community. Because it felt like betrayal.

You weren’t afraid to ask that all-important question, a question that confronts people who look like Michael Brown, Eric Garner and myself: “Who’s afraid a large black man?” Tragically, it now seems like the answer might be you.