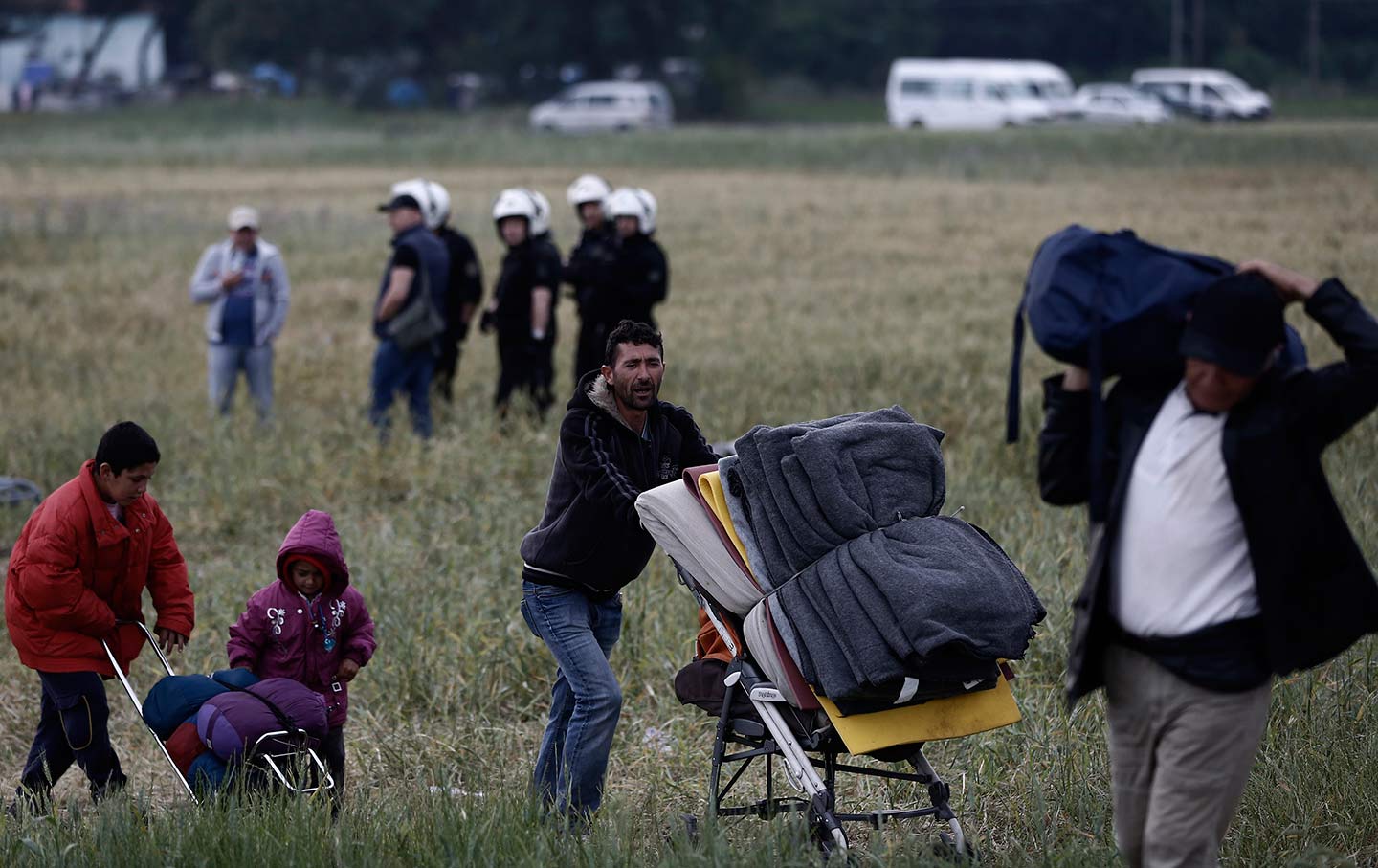 A refugee family carry their belongings during a police operation at a refugee camp at the border between Greece and Macedonia, May 24, 2016. (Reuters / Yannis Kolesidis)

The morning after the White House dropped Trump’s new travel ban, throwing refugee advocates into turmoil, Europe woke up on Monday to two realities regarding its own refugee and border policies: Germany’s parliamentary elections unexpectedly boosted the far-right Alternative für Deutschland (AfD) party, and European Union migration authorities report that the EU has failed disastrously to meet the original 2015 target for relocating Middle East refugees seeking asylum. After member states were allocated a limited number of relocation “slots” to distribute tens of thousands of asylum seekers across the continent, the majority remain trapped in a lengthy slog through the legal process for asylum. Fewer than a third of the relocation quota—the initial step toward eventual long-term resettlement—has been met so far. That 70 percent remain attests to rising anti-immigrant fears and their real-life consequences at the border.

The target was arguably irresponsible to begin with—far too narrow to really dent the larger refugee crisis. The overall number agreed upon in 2015 was 54,000 asylum seekers in the process of long-term resettlement in Europe, their last chance of escaping conflict and devastation in their home countries. In response to the peak of the refugee influx of 2015, the 54,000 quota was an arbitrarily set “down payment” on a plan to redistribute about 160,000 people over two years—a stopgap measure to relieve increasingly desperate conditions mounting at the Turkish-Greece border. Many other migrants were subsequently shipped from the border zone to camps across the Turkish border.

The distribution of the number of refugees a country would be required to take in under the 2015 agreement, based on the host country’s size and estimated capacity to accept new residents, ranged from fewer than 200 in the smallest countries to tens of thousands for Germany, which had set a high bar initially, agreeing to absorb roughly one million refugees. Meanwhile, the volume of humanitarian need continues to rise, even as political fatigue with the refugee “problem” deepens. McGowan adds that the current queue for relocation has been frozen since last year, meaning that, given the new arrivals, “There are thousands of others who are still awaiting relocation in Greece and Italy, who are waiting to be relocated, or waiting for their claims to be processed…. This is playing politics with people’s lives.” 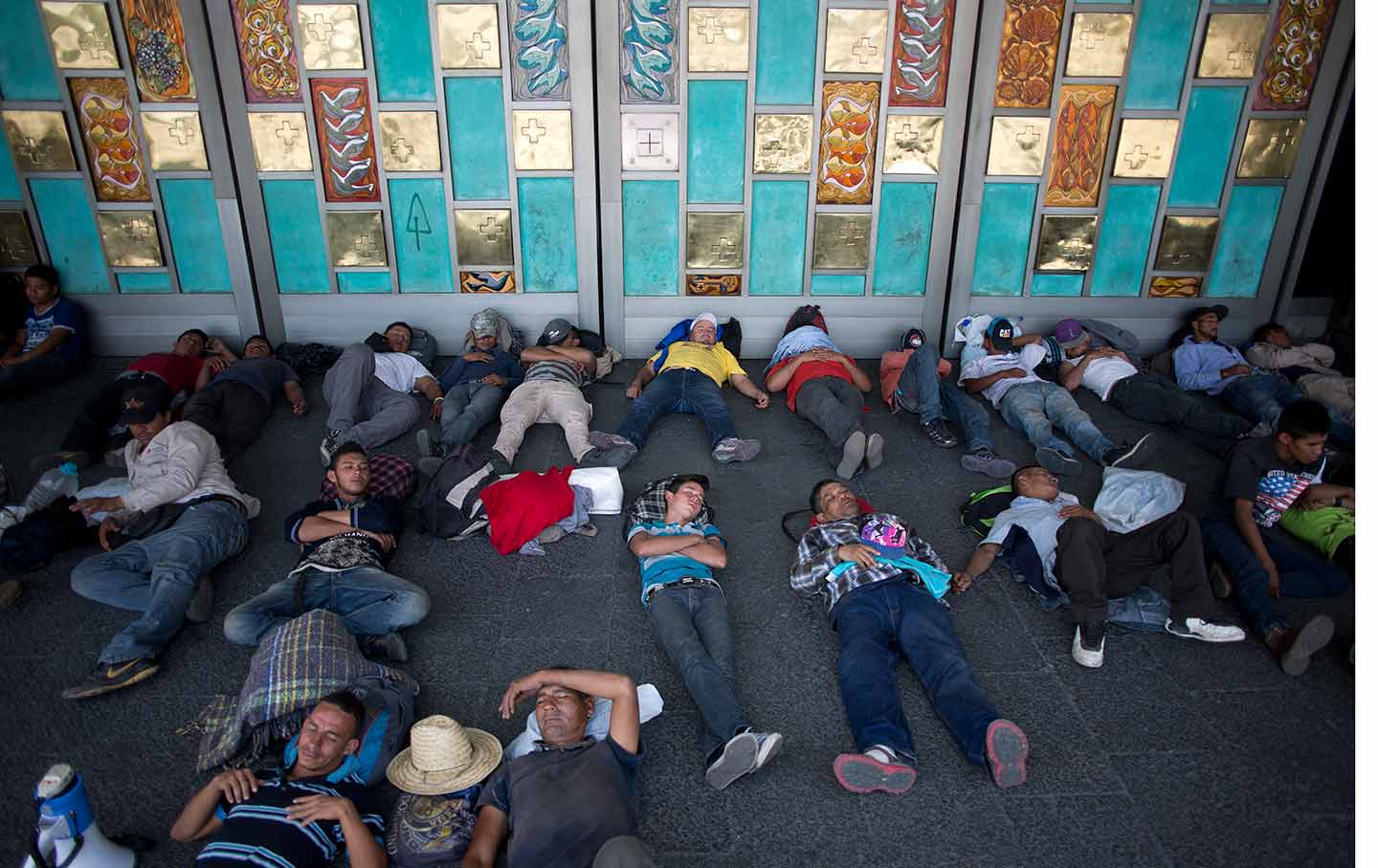 But the media spotlight has drifted on over time, and any sympathy that first greeted the refugees has since been overshadowed by xenophobia and panic. One year after the 2015 target was set, the EU Parliament, a body of representatives that parallels the European Commission (EC), upended the plan by approving a non-binding resolution, raised by Slovakia and Hungary, citing national-sovereignty issues. In a sign of both the strength and weakness of EU institutions as a moral compass for the continent, the European Court of Justice struck down their rejection of the quotas. Yet the vote does not have the force of law, anyway, and the reality is that the law is already being flouted by political inertia. As of September 20, the vast majority of EU member states have failed to fulfill tens of thousands of “slots” for relocations, ranging from a gap of 48 for tiny Ireland and 15,300 for France. Even the supposedly generous Germany has well over 19,400 slots still to be filled. Of all EU member states, only the tiny island of Malta has met its commitment, relocating 131 people.

Far-right elements have used the issue of refugees to present themselves as guardians of the safety and purity of white Christian Europe. Hungary’s foreign minister, Peter Szijjartom, denounced the mandate as an “appalling and irresponsible”overreach by the EC, and tapped into public unease around the integration of Muslim refugees, saying the accord “jeopardizes the security and future of all of Europe.” Although the fears of a right-wing takeover in Western Europe have not yet played out, the unusually strong showing of the AfD marks the first time a far-right party has gained seats in the German Parliament in 70 years.

For the asylum seekers who have been temporarily relocated, their future is far from certain. Court systems differ widely across the EU in their asylum-review processes. In total, while more than 160,000 refugees were supposed to be relocated over two years, today, only about 27,700 people have effectively been transplanted, and their journey is far from over.

According to an analysis of data by Pew Research, a total of 1 million migrants are in limbo across Europe. Of 2 million who sought asylum since 2015 from various countries, just 40 percent have been granted legal status. The courts are also remarkably inconsistent in granting asylum for people from war-torn areas as well: In Germany, asylum claims from Syrians have been accepted so far at a rate of 80 percent, while just one-fifth of Afghan nationals with pending claims have been accepted. Those who have been rejected face an indefinite wait in the shadows, perhaps rejoining the floating mass of transient slave laborers in the continent’s human-trafficking networks.

On the main smuggling artery, Libya, the death rate is spiking—fueled by EU support for the country’s increasingly militarized Mediterranean border patrols, despite the humanitarian risks. The new refugees may have less hope of qualifying for relief. They are often labeled “economic migrants” rather than asylum seekers—black African workers have been downgraded in the humanitarian taxonomy under antiquated border policies. Ultimately, Europe’s refugee system must be overhauled to confront the reality that displacement is no longer a temporary emergency but a permanent state of societal disruption.

The rise of Germany’s AfD signals a further lurch to the right for Europe. Meanwhile, in Washington, Trump’s revised travel ban closes yet another door to a previously relatively open country. But as the West’s borders steel themselves against outsiders, the refugees keep coming. Across Europe, Amnesty International’s McGowan says, “There is a dire need for solidarity, between member states and with refugees fleeing war and persecution,” on measures such as fostering family reunification and granting more work and study visas.

The more governments put off dealing with the crises at their doorstep, the more they fuel the violence, war, and poverty that is inducing overwhelming misery across the Global South. The crisis for the regions that refuse to provide sanctuary is now self-induced: The West’s civil society will be cannibalized by its own fears, not invaded from the edges.