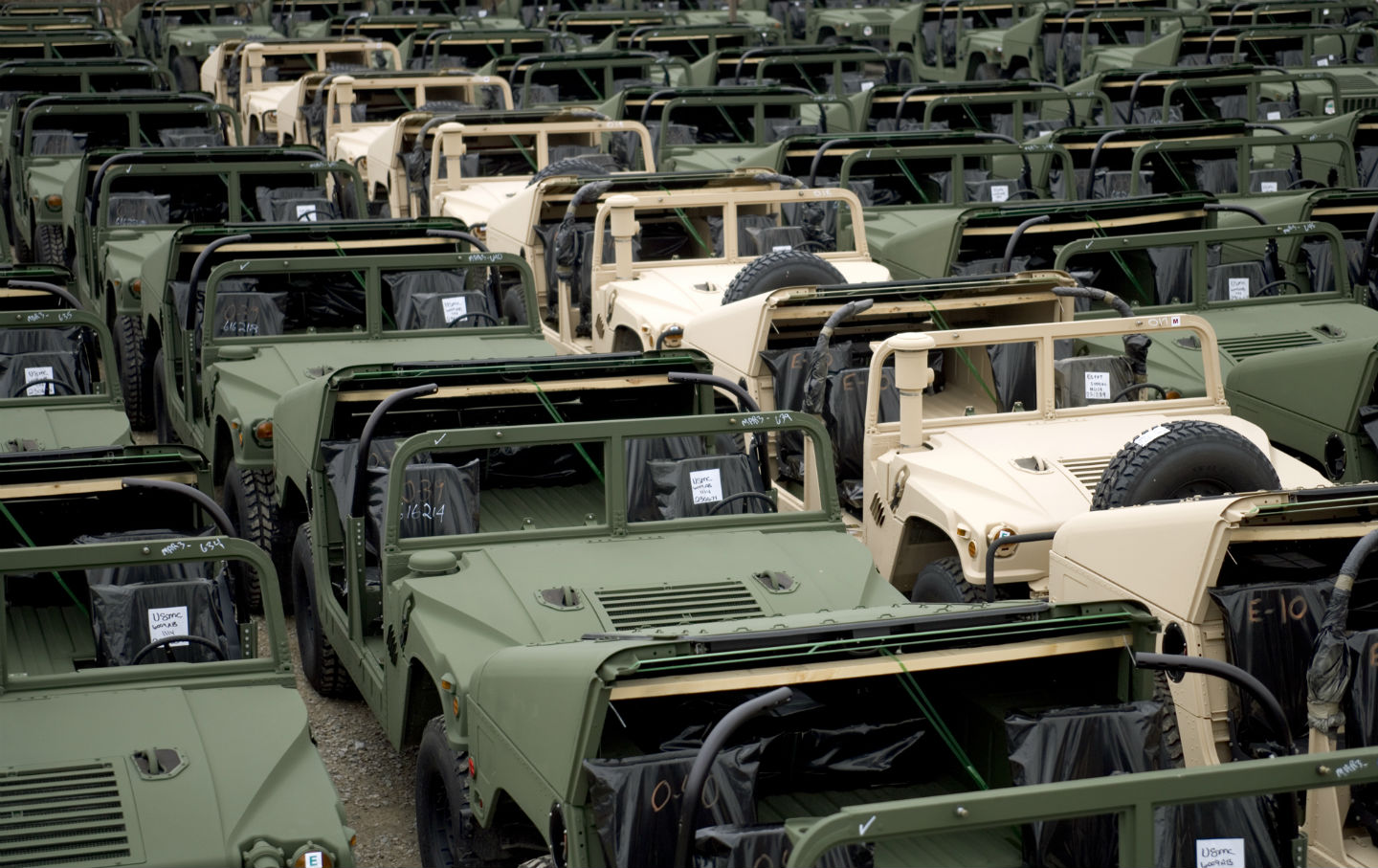 Any honest discussion of balancing budgets has to begin with an acknowledgement that it is necessary to audit Pentagon spending and address the bloated budgeting of the Department of Defense. As Senator Rand Paul explained back when he was Time magazine’s “most-interesting man in politics”: A serious plan for balancing the federal budget must feature a plan for the “draw-down and restructuring of the Department of Defense.”

When he entered the Republican Party’s bloated 2016 presidential race, Paul became less interesting. But he still asked some of the best questions. For instance, in Paul’s finest GOP debate performances, he demanded to know, “How is it conservative to add a trillion dollars in military expenditures?” As the only serious candidate in the Republican race, Paul informed his opponents: “You cannot be a conservative if you’re going to keep promoting new programs that you’re not going to pay for.”

A recognition of the need to address the Pentagon’s excessive and irresponsible spending should be at the center of the politics of both major parties. Unfortunately, despite some attempts by Paul on the Republican side and Bernie Sanders (and, while he was still in the race, Lincoln Chafee) on the Democratic side, the 2016 presidential competition has not featured sufficient discussion of the pathologies that develop when Pentagon excess is encouraged.

But the Congressional Progressive Caucus has steered the discussion in a sensible direction with its 2017 “People’s Budget,” which proposes a “Prosperity, Not Austerity; Invest in America” agenda. At the heart of the CPC proposal is a commitment to a $1 trillion infrastructure investment program that includes $765 million to address the infrastructure crisis in Flint, Michigan, which has evolved into a humanitarian crisis. There are also proposals for necessary investments in healthcare, education, and programs to address hunger. And, as usual with the most fiscally and socially responsible caucus in the Congress, there is a plan to pay for it all.

The CPC retains its commitment to a financial-transactions tax on Wall Street speculation, as well as proposals to close loopholes and end practices that allow corporations and CEOs to avoid paying taxes. By combining smart policies and smart economics, says Congressman Mark Pocan, the Wisconsin Democrat who serves as the first vice chair of the CPC, which now has more than 70 members. The People’s Budget “reverses harmful austerity cuts and fixes a system that for far too long has only benefited those at the top. The Progressive Caucus Budget rebuilds our crumbling roads and bridges, creates good paying jobs, and increases educational opportunities from pre-kindergarten to college. Our budget invests in the American people and gives working families the best opportunity to get ahead.”

But what may be most striking about the CPC budget is the determination of the caucus to address the excessive Pentagon spending that eats up so much of the hard-earned tax money Americans send to Washington.

As usual with the most fiscally—and socially—responsible caucus in Congress, there is a plan to pay for it all.

“Pentagon spending has doubled over the last decade at the expense of investments in working families,” explains the CPC document. “But as the war in Afghanistan draws to a close, we need a leaner, more agile force to combat realistic twenty-first-century threats. The People’s Budget responsibly ends operations in Afghanistan, brings our troops home, focuses Pentagon spending on modern security threats instead of Cold War-era weapons and contracts, and invests in a massive job creation program that will help workers transition into civilian jobs. The People’s Budget also increases investments in diplomacy, sustainable development, and humanitarian assistance to address the ongoing crises in Syria and Iraq.”

The CPC plan features a proposal that progressives, responsible moderates, and thinking conservatives have embraced: auditing the Pentagon. “As the only federal agency that cannot be audited, the Pentagon loses tens of billions of dollars annually to waste, fraud, and abuse,” argues the CPC. “It is past time to check the wasteful practices with little oversight that weaken our financial outlook and ultimately, our national security.

With real information about current defense spending, and about the sort of spending cuts that might realistically and responsibly be made as part of a shift in priorities, the CPC outlines an approach there steers the United States toward a better balance when it comes to budgeting.

Specifically, the CPC proposes to “reduce baseline military spending to ensure Pentagon spending does not continue to contribute significantly to our fiscal burden, and establishes a responsible targeted approach towards a sustainable defense budget.”

The CPC also outlines a plan to help communities adjust to the downsizing of the military-industrial complex by investing in the development of nondefense manufacturing. By increasing investments in the Department of Defense’s Office of Economic Adjustment “to assist state and local governments to respond to major defense program shifts by helping communities adjust to defense contract losses,” and by fully funding initiatives that will significantly increase federal agency procurement of sustainable technology from communities impacted by Pentagon cuts, the CPC says, its plan “will help provide a just transition for defense manufacturing workers and ensure that the US manufacturing base remains vibrant.”

Influenced by the insights and activism of Congresswoman Barbara Lee, the visionary California Democrat who served as one of President Obama’s representatives to the United Nations, the CPC plan recognizes the vital importance of a focus on diplomacy and development that promotes global cooperation and stability. The “People’s Budget” calls for “increased United States leadership in the United Nations, smart security, providing vital governance, development and humanitarian assistance, and increasing the tools to combat the horrors of drug and human trafficking and nuclear proliferation.”

The CPC budget concludes by noting, “According to the United Nations High Commissioner for Refugees, the number of people forcibly displaced throughout the world has reached the highest level ever recorded at a staggering 59.5 million people. The People’s Budget recognizes this and provides robust funding for refugee resettlement programs. Our plan rebalances goals and risks to achieve a more effective mix of defense, diplomacy, and development aid. By adopting this new global security posture, investing in domestic priorities and creating a cost-effective military aligned with 21st century threats, the U.S. can achieve significant deficit reduction goals while simultaneously enhancing global security.”

More than 60 years ago, President Dwight Eisenhower issued a warning:

Every gun that is made, every warship launched, every rocket fired signifies, is in the final sense, a theft from those who hunger and are not fed, those who are cold and are not clothed. This world in arms is not spending money alone. It is spending the sweat of its laborers, the genius of its scientists, the hopes of its children. The cost of one modern heavy bomber is this: a modern brick school in more than 30 cities. It is two electric power plants, each serving a town of 60,000 population. It is two fine, fully equipped hospitals. It is some fifty miles of concrete pavement. We pay for a single fighter with a half-million bushels of wheat. We pay for a single destroyer with new homes that could have housed more than 8,000 people…. This is not a way of life at all, in any true sense. Under the cloud of threatening war, it is humanity hanging from a cross of iron.

Eisenhower’s wise counsel is rarely recalled today in his Republican Party, and it is too frequently neglected in the presidential politics of today’s Democratic Party—with the encouraging exception of CPC cofounder Sanders’s criticism of the failed “regime change” strategies of past presidents.

The CPC’s “People’s Budget” takes the discussion where it needs to go—by reclaiming the budget process and reestablishing the connection between responsible policy and fiscal responsibility.

As Congresswoman Lee says, “The People’s Budget [will] save taxpayers billions by halting funding for endless war and reshaping Pentagon spending to meet our 21st century security needs.”