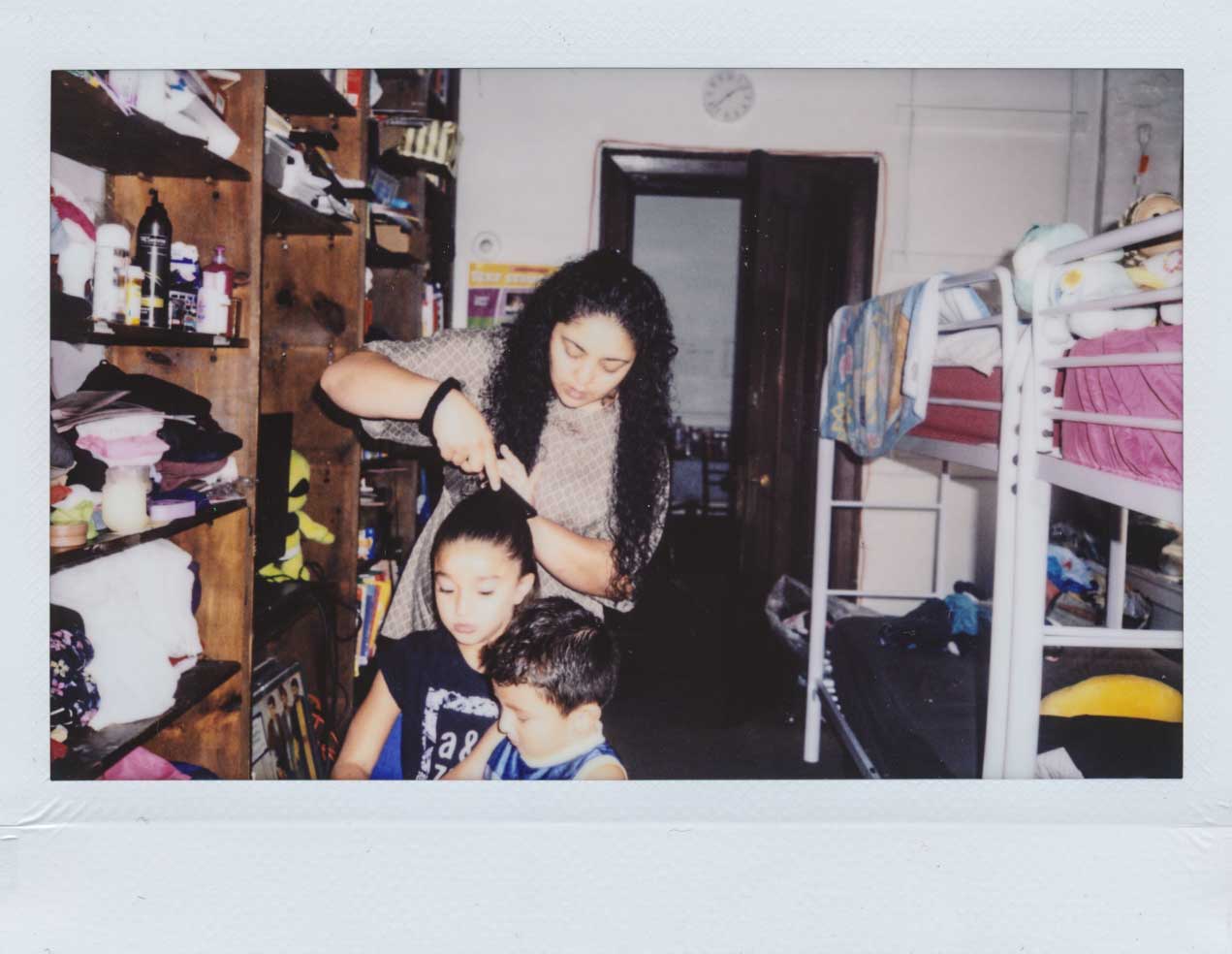 Amanda Morales arranges her daughter Daniela’s hair in the library that has been their bedroom since August, 2017, in Manhattan’s Holyrood Church.  (Dulce Carvajal)

Dulce Carvajal is a lot like most 10-year-olds. She likes reading and writing, drawing and horses, and playing with her younger siblings. Too much attention embarrasses her. Candy makes her giddy. But unlike most other kids her age, Dulce has spent the last six months living far from home, in a strange building filled with pews and crosses, candles and an organ. Dulce lives inside a church.

Dulce moved into Holyrood Church in New York City with her mother and two siblings last August, after Dulce’s mother, Amanda Morales, was told she was going to be deported to Guatemala. All three children—Dulce, Daniela, and David—are US citizens. But rather than leave them at home while fighting the Trump administration’s deportation efforts, Amanda, who did not want to be separated from her children, decided to bring them into sanctuary with her.

Dulce is an aspiring writer and storyteller. So, as she has grappled with her new and complex world, she has begun writing her own story. In the evenings, sitting at the small dinner table or at the edge of her shared bunk bed, she peers at her family’s laptop and types in bursts of concentrated energy, pausing occasionally to ponder her next thought amid the din of her new life—her mother talking with her new church-member friends; her sister whirling across the single, cramped bedroom; and her baby brother’s tablet streaming his favorite cartoons.

What follows is Dulce’s story as told by her through photos, written text, and a video narration. It is the second installment of “Finding Sanctuary,” a Nation series chronicling Amanda and her children’s daily lives as they seek refuge from Trump’s anti-immigrant agenda. Read the first episode of this series, “The Walls of this Church Are the Only Thing Standing Between Amanda Morales and Deportation,” to learn more about Amanda and her children.

Once upon a time there was a girl named Dulce. She had a mom who was going to get deported. Because of Mr. Trump. He doesn’t want people who don’t have papers for the United States. So on August 17, the mom was going to go to New York City to go to the court. But she didn’t go, because she knew she was going to get sent to Guatemala.

So she decided to go to a church on August 17 with her three kids named Dulce, Daniela, and David. The oldest one, that was Dulce, knew a little bit more about what was going on, but the younger ones didn’t really know that much. But, actually, the youngest one is 2, that is David, and the medium one is 8, and that’s Daniela. So the medium one did know a little bit.

When they got there, they were kind of surprised that the church was kind of big and looked kind of scary. The ladies that worked there showed them the room they were going to stay in. They were happy, but when it was time for their dad to leave the oldest one started to cry, because she was going to miss her dad. Because she gets emotional easy and because she was sensitive. She cried a lot, but the ladies in the church told her not to cry, she was going to be fine. So she calmed down and said bye to her dad. She was super sad. When they were sleeping there, the kids were kind of scared, but mostly the oldest one, because she really missed her dad and she cried and cried. She wished she was back home with her dad. Now they are there for six months, and the oldest girls go to school and the baby stays home with his mom. 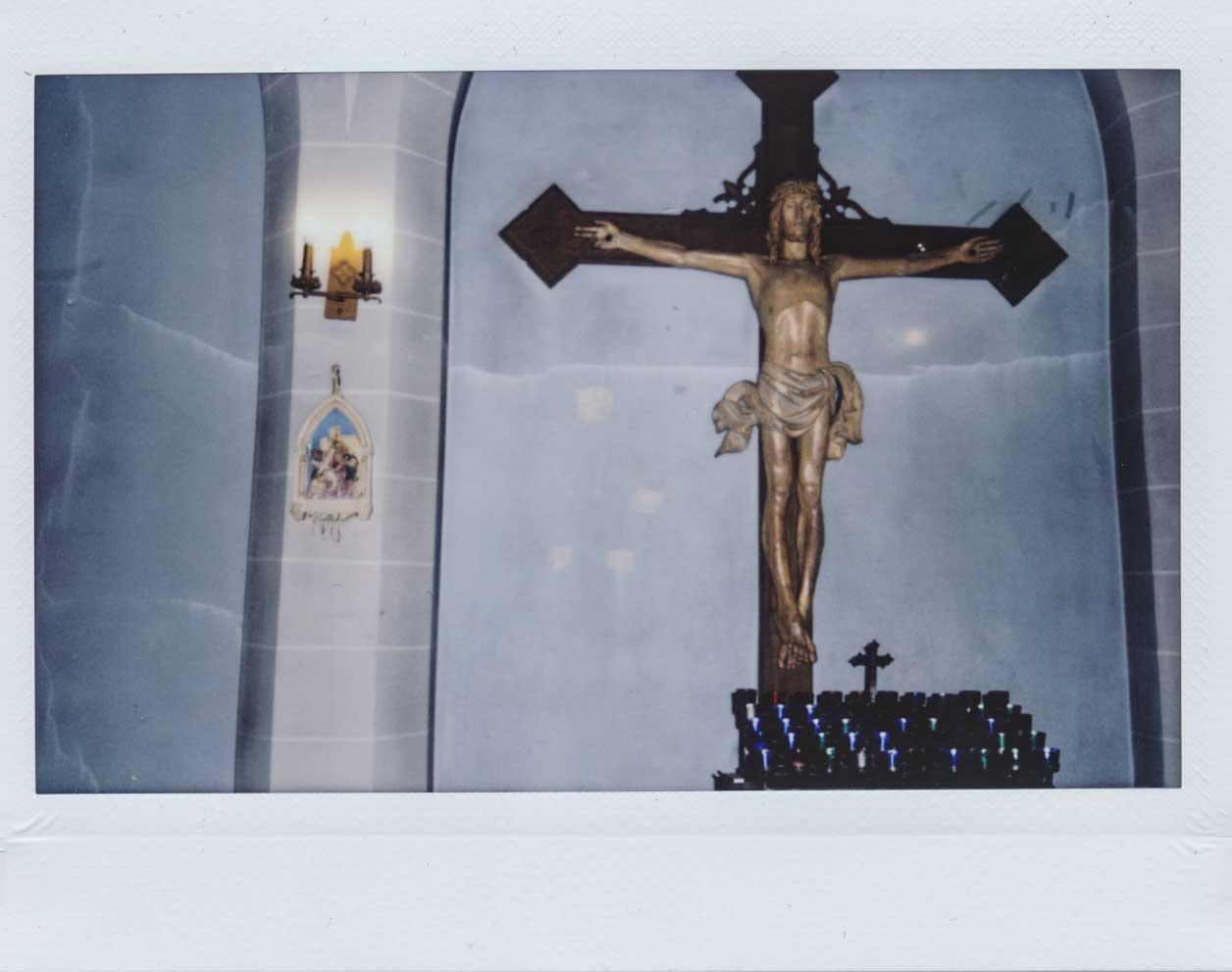 "I like the dolls and the pictures that are in the church, they are very beautiful," says Dulce. (Dulce Carvajal)

The girls sometimes like going to school. Sometimes the medium one likes going because sometimes there’s fun days, but sometimes she doesn’t like going because there’s not fun days. The oldest one likes going because she likes writing and reading and being with her friends. She doesn’t like going because they have to go outside in the morning and have to go to different classes to do math and she doesn’t like that. She has to go to different classes because there are fourth and fifth graders in her class, because the school has the grades together. After they come from school they say hi to their mom and go to this program called Washington Heights Choir school. In that program they eat a little snack then sometimes go singing or do their homework, but if they don’t have homework they do projects. But on Tuesday there’s a teacher who comes and plays the recorder and some other instruments. After the program, they eat while watching their tablets, then they go take a shower, read a book, or watch their tablets. Then they go to sleep. 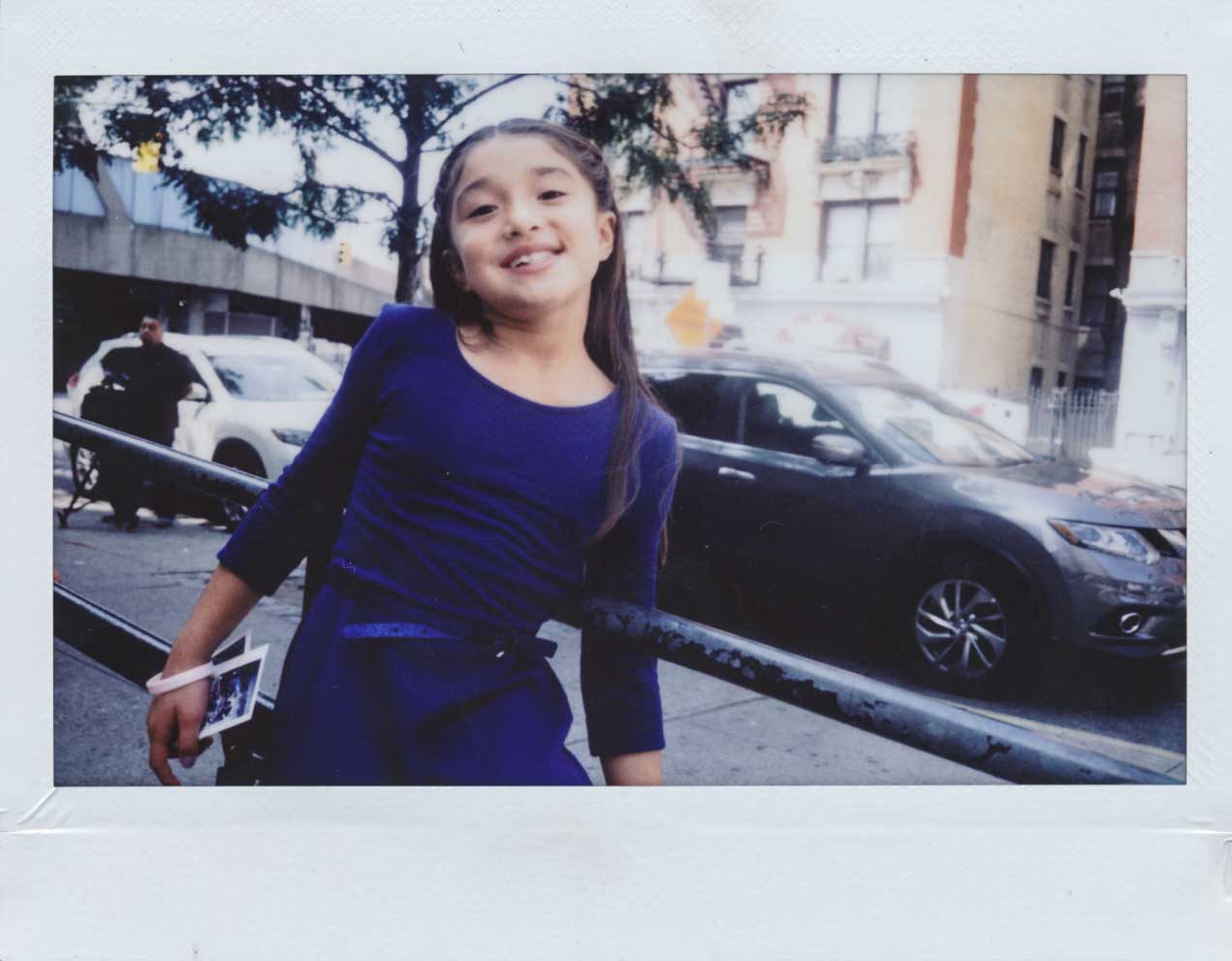 Daniela outside Holyrood church. "I would like my mom to come out and play with us at the park…but they say that if she comes out the police can grab her," says Daniela. (Dulce Carvajal)

PART 3: GETTING TO SCHOOL

At first, how they get to school is there is this lady that comes and picks them up at 8 o’clock or before 7 something. Then the girls say bye to their mom. Then the lady brings her grandchildren first and then brings the girls. After school, the girls see the lady waiting and they tell their teacher. The lady picks them up and they leave with her to the church.

PART 4: HOW THEY FEEL AT SCHOOL

How Dulce feels at school is, sometimes she is happy she goes to school but sometimes she feels sad because it’s not like her old school because it doesn’t have a library and Dulce’s old school had a library. She likes going to the library because she likes reading. Also at the school that they go to they sing a lot and Dulce doesn’t like singing a lot. And Dulce misses her old friends.

How Daniela feels is sometimes nervous, because sometimes she thinks something is going to go wrong and her day doesn’t go well sometimes. She also feels happy sometimes. 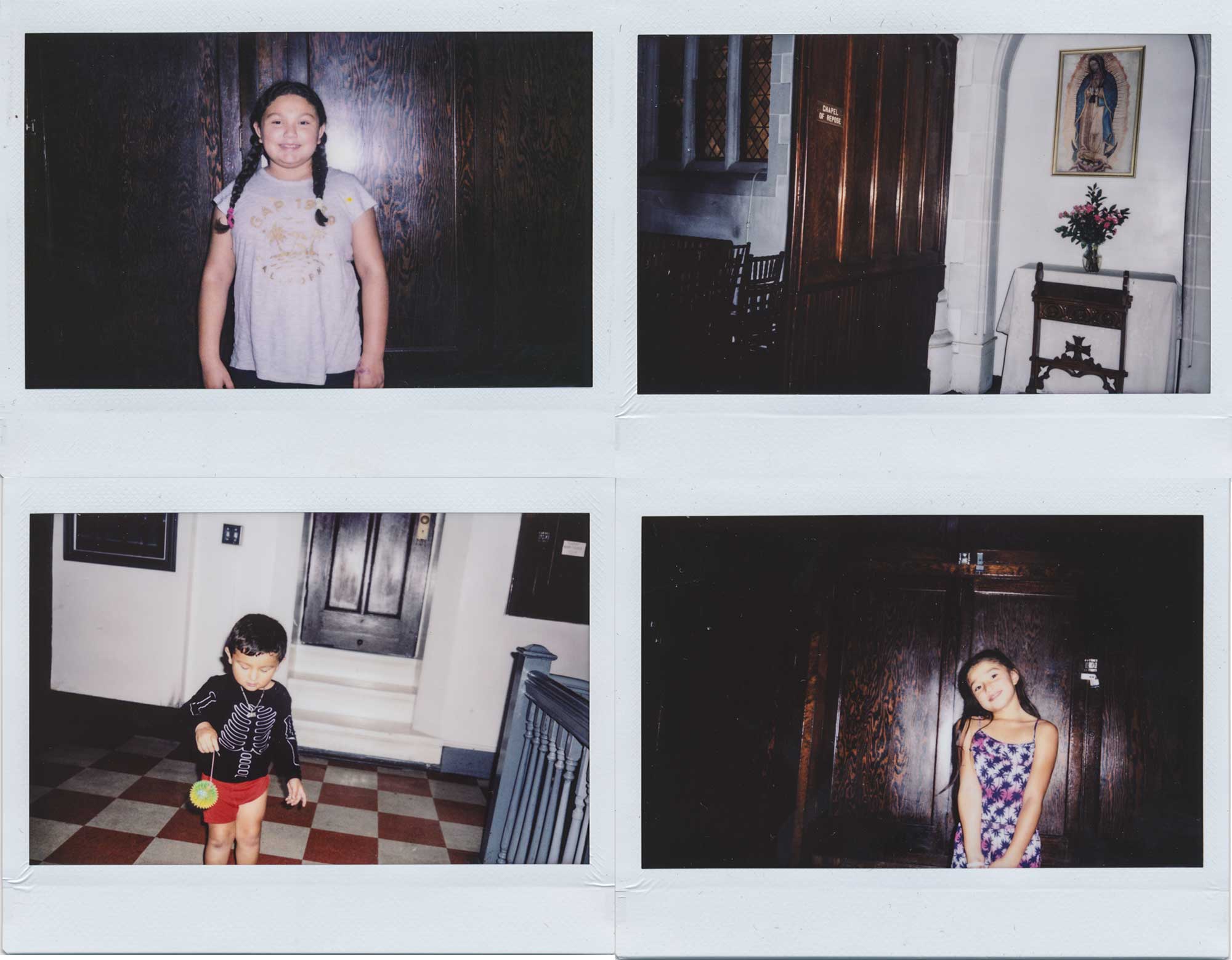 Now there were three birthdays in the church. The first birthday was October 22 in 2017 on a Sunday. Dulce’s birthday. The night before her birthday she was decorating goodie bags, doing balloons. She told her mom, whose is this birthday? And she said for this boy, and Dulce said okay. Dulce didn’t even know it was for her, because she thought they would not do nothing for her birthday because her mom couldn’t buy anything for her because she can’t get out of the church and also because her mom said they would not do anything for her birthday. Also before her birthday, they did her hair, they straightened her hair and blow dried her hair. So on her birthday, she got ready with her new clothes and shoes, they took her to McDonald’s. She also brought her siblings with her.

So she went downstairs, because her mom brought her in this room and people sang happy birthday, cut the cake, kids got goodie bags, played games and ate. Oh, and also there was music, a lot of music and lot of people. What Dulce didn’t like was there was a lot of music, so crowded and a lot of people. Then when they all ate well, Dulce’s family came upstairs where Dulce and her mom and siblings live. Their family talked and talked and Dulce and her cousins played together and also her sister. 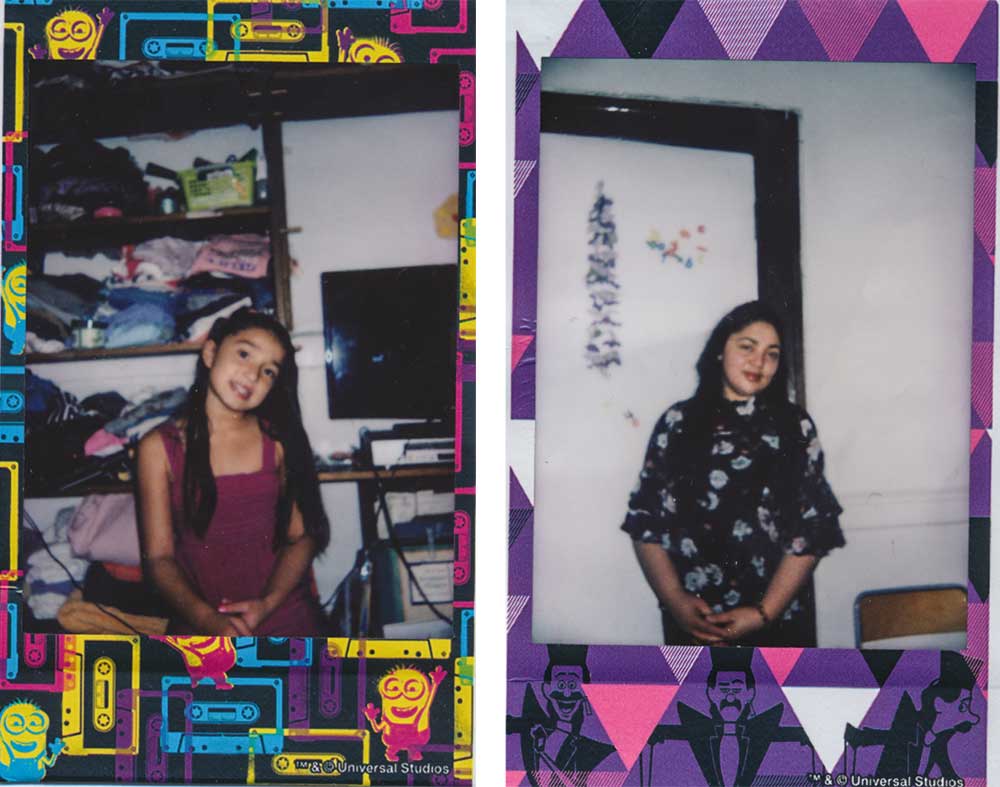 The third birthday was on January 10, 2018, on a Wednesday, David’s birthday. What was fun on David’s birthday was that when they came from school, then they took a shower and while they were taking a shower, some people were setting up David’s decorations of Mickey Mouse. There was balloons, piñata, they put candy in the piñata, there was also face masks with sticks of Mickey Mouse and cake. Then some people came over and the kids were playing games like playing on the tablets, dancing hand games and musical chairs, listening to music, eating food and also eating a lot of candy. David’s birthday was really fun. It was fun for them because the kids felt like they were the ones who ruled the party, and kids don’t really get to rule grownups.

The second birthday was on December 29 on a Thursday, the mom’s birthday. The kids didn’t really get to celebrate because they were not here, they were with their dad. But in the church, Dulce thinks they did something on her birthday.

PART 7: WHAT WILL HAPPEN NOW? 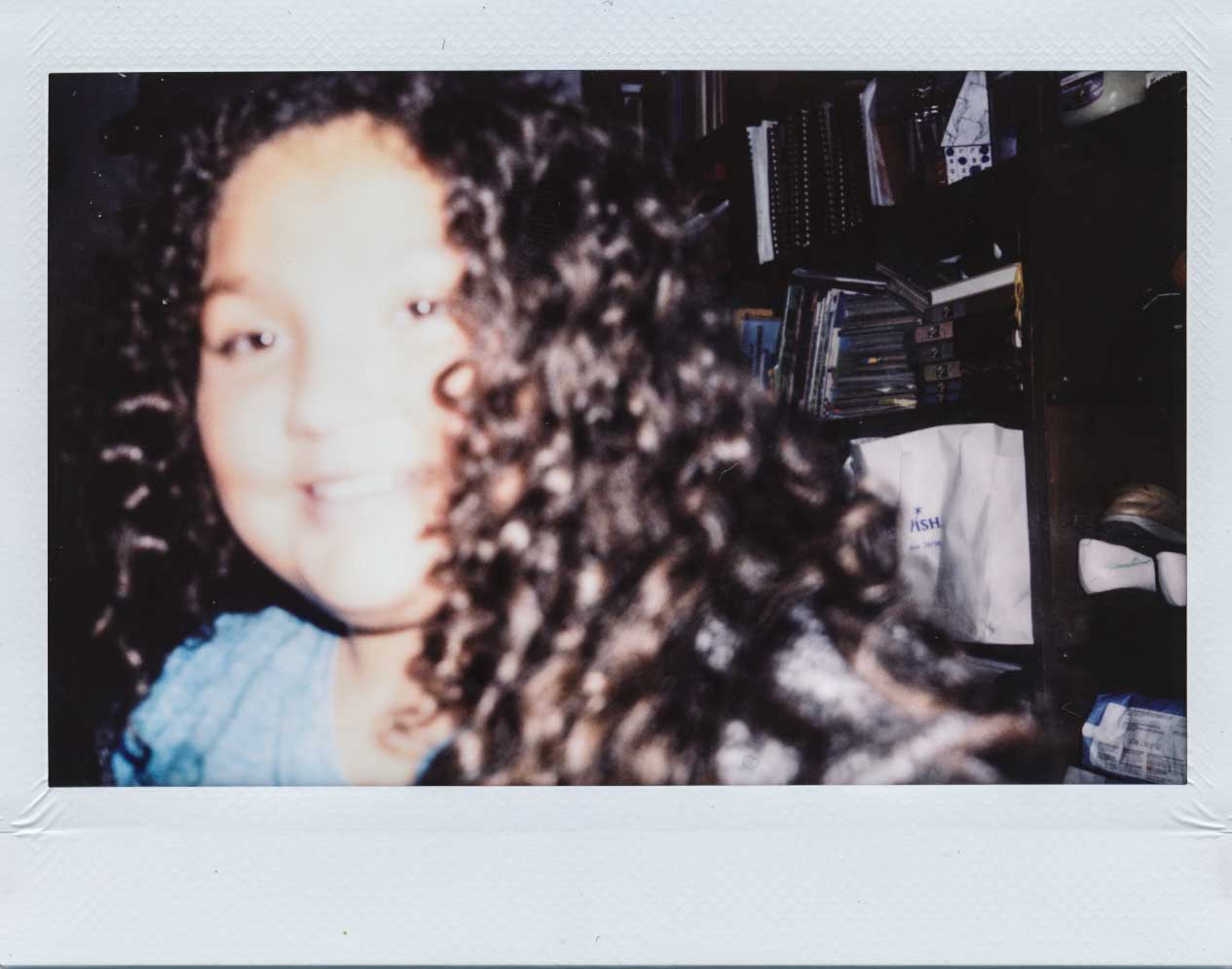 "When I grow up I want to be a famous writer…ah, and also a photographer," says Dulce while her sister takes her photo.  (Dulce Carvajal)

This is the second episode in an ongoing series about Amanda Morales, her children, and their lives in sanctuary. The authors have been chronicling their story since August, after meeting Amanda through immigrant-rights activists (full disclosure: photographer Cinthya Santos Briones is married to one of the founders of the New Sanctuary Movement), and they have witnessed both the happy moments and the hard ones, the despair and resilience, the frustration and hope. Read the first episode of this series, “The Walls of this Church Are the Only Thing Standing Between Amanda Morales and Deportation,” to learn more about Amanda and her children. The next episode will feature the story of Amanda’s migration to the United States and her legal fight to stay here.