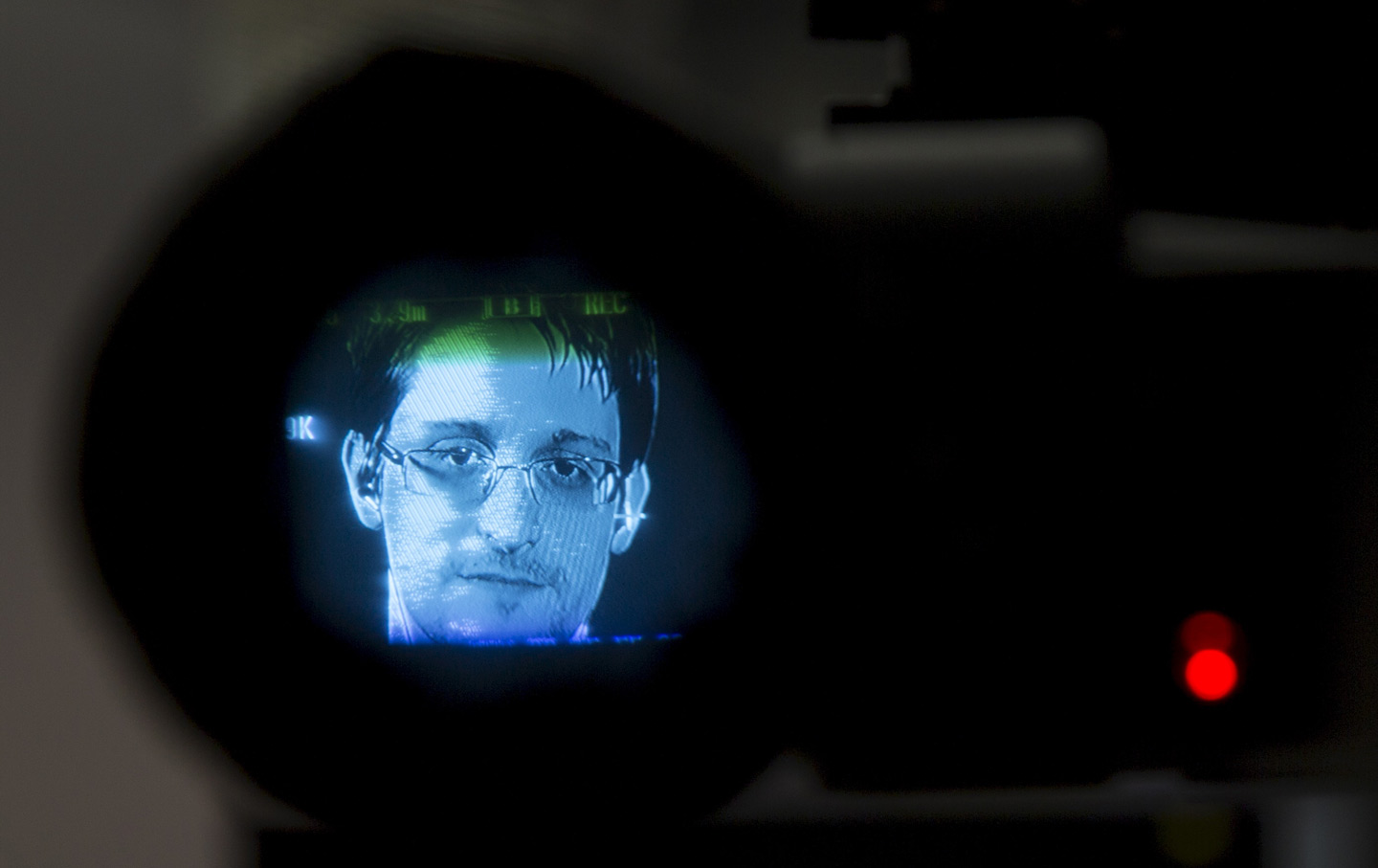 Edward Snowden is seen through a camera viewfinder as he speaks at a conference about the International Treaty on the Right to Privacy, Manhattan, New York, September 24, 2015. (Reuters / Andrew Kelly)

Donald Trump has made no secret of being petty and vindictive toward his critics. He has threatened to sue The New York Times, which he says his attorneys are “watching.” Last winter he pledged, if elected, to weaken First Amendment protections. He has gone after individuals, as well, menacing MSNBC’s Mika Brzezinski by threatening to expose her private life. How would you like him to be able to watch you at will through that little camera lens on your laptop? As president, he would certainly have that power and more, as Oliver Stone’s powerful film Snowden makes clear.

The debate over massive government surveillance is often posed as a choice between safety and privacy. But under a Trump presidency, you would not have either one. One thing we have learned is that almost all governnment employees will do as they are told, even to the point of inflicting illegal torture on people. Otherwise, why was there only one Ed Snowden? Thousands of people knew about the abuses he exposed. If Trump orders the National Security Agency to out embarrassments in the private lives of all critical journalists or all prominent Mexican-Americans, it will comply. Moreover, it should be remembered that under US law, citizens of other countries have no protection from American spying whatsoever, so that Trump could rampage around listening in on heads of state, officials, and members of parliament in countries that are NATO allies, exposing their private lives and creating scandals.

Oliver Stone’s gripping film is a horror movie, not a thriller. All horror movies are about a monster. The monster in this case is a composite character, comprising bits and pieces of James Clapper (the NSA head who lied to Congress about his surveillance of millions of Americans) and Michael Hayden, his predecessor, who is still proud of having used a big black marker to cross out the Fourth Amendment from the copy of the Constitution in the National Archives. It is sometimes forgotten that J.R.R. Tolkien’s Lord of the Rings trilogy is also a horror tale, in which the dark lord of Mordor, Sauron, not only menaces the world but does so through diabolical inventions such as the eye of Sauron and the ring of power. Perhaps the most menacing monster of all are the thousands of ordinary NSA employees who operate the Eye of Sauron on behalf of the dark lord of an intrusive and lawless US government. Many no doubt think they are keeping the republic safe, without stopping to consider whether their methods have left us with a republic to begin with.

There is zero evidence that warrantless bulk electronic surveillance inside the United States has ever stopped a single act of terrorism. Inside the country, the program was apparently mainly used to bust drug dealers by tracing whoever calls one, and then local law enforcement was instructed to lie to the judge about how they made their case (since the surveillance was illegal). The entire process is far more damaging to society, inasmuch as it corrupts public institutions and trust, than the purchase of a few dime bags of pot. Indeed, since marijuana appears to reduce desire for opioid abuse and probably cuts down on pill addictions (which are legal with a prescription), all the pot deals the Feds busted with their unconstitutional tactics probably actually damaged Americans’ physical and mental health.

Another scary prospect is having the erratic and vindictive Trump not only in charge of spying on the whole world but also deciding on who gets droned to death on the basis of that intelligence. As it is, the Bureau of Investigative Journalism has found that since 2004, US drone strikes in four countries have killed between about 500 and about 1,100 civilians, many times the number that President Obama will admit to. That estimate does not take into account the shameful US practice of counting all military-age men killed in a strike as militants. Trump, who has advocated killing the families of alleged terrorists, will clearly have no compunction about operating this deadly global killing machine, which operates outside any provision of US or international law (the fig leaf of US government “self-defense” surely would be laughed out of court if it could ever be brought to a court).

The US government’s shameful campaign against effective encryption has also left Americans and everyone else more vulnerable to hackers. In a fit of pique, the FBI not only demanded that Apple Corp. invalidate its own encryption standards, but when its own hackers found a vulnerability in the iPhone 5, the FBI refused to tell Apple the details. (Knowing about and acting on an encryption flaw before a company finds out about or can fix it is called a “zero-day exploit” by hackers.) In essence, the FBI collaborated with the Russian hackers trying to get into everyone’s iPhones because the FBI wants the same thing. The pretext for this attempt to make millions of iPhone users unsafe? The San Bernardino shootings, about which the phone hack appears to have told the FBI nothing significant, or we would have heard about it. The FBI already had access to all the email and instant-message communications of the shooters, who appear to have been lone wolves. Isn’t it time to call lone-wolf terrorists not terrorists at all but just criminally insane people who dress up like ISIL the same way other mass shooters dress up like comic book heroes or Nazis? There is in any case no way mass surveillance can stop such people. We can be assured that Trump will be even more interested in breaking the encryption of his perceived enemies than is FBI director James Comey.

Nor should anyone be sanguine that the passage of the USA Freedom Act in summer of 2015, which restricted the US government’s warrantless bulk collection of telephone records, really changed anything. The government can get at that metadata, now held by the telephone companies, with a simple subpoena or a National Security Letter, and by other exploits based on other legal authorities. Only Internet users savvy enough to deploy encryption are relatively safe from prying eyes, and doing so itself attracts an additional level of government surveillance.

The bureaucrats and software engineers at the NSA and some other agencies, most of which cannot be found in the US Constitution, have since the late 1990s assiduously and recklessly abrogated the Fourth Amendment of that Constitution. This impudent activity increased to gargantuan proportions after the overnight passage of the Bush Patriot Act in 2001. It is not entirely clear that Barack Obama was even briefed on what they were doing until more than a year into his presidency, at which point he abandoned all his campaign pledges and signed on to the program.

But in 2015 a federal court struck down the national security state’s bizarre interpretation of that law as abrogating Fourth Amendment protections. Such rulings are rare because the US government goes out of its way to avoid giving anyone the standing to sue by keeping everything it is doing hushed up. This past spring, even a member of the secretive FISA court, which has largely acted as a “rubber stamp” for the surveillance (as one character in Stone’s film rightly calls it), publicly expressed “disappointment” that the NSA was still holding Americans’ personal information for half a decade longer than is now legal.

The Fourth Amendment was put in the Constitution to stop the government from rifling through your personal effects and reading your mail even though there was no proof you were engaged in criminal activity. Stopping the government of King George III from behaving that way was one of the reasons for the Revolutionary War. Just because our personal effects, papers, and mail are now in cyberspace is no reason for the government suddenly to not need a warrant to examine them.

Oliver Stone’s film indicts not just the NSA but the American power elite. Barack Obama contributed as much to these unconstitutional practices as George W. Bush, or more. Before that, Bill Clinton fought the very right to encryption tooth and nail, and lost, at least in the law. Hillary Clinton has also been very bad on Fourth Amendment issues. All four are now hoping that the Eye their spells brought into existence stays in the hands of someone they think responsible. But as Tolkien would have told them, instruments like the Eye of Sauron and the Ring of Power are inexorably corrupting of the soul. For Trump to have these instruments would be a catastrophe. For anyone to have them is a calamity for the rule of law. We need to rid ourselves of them quickly, before they are acquired by a truly dark lord.