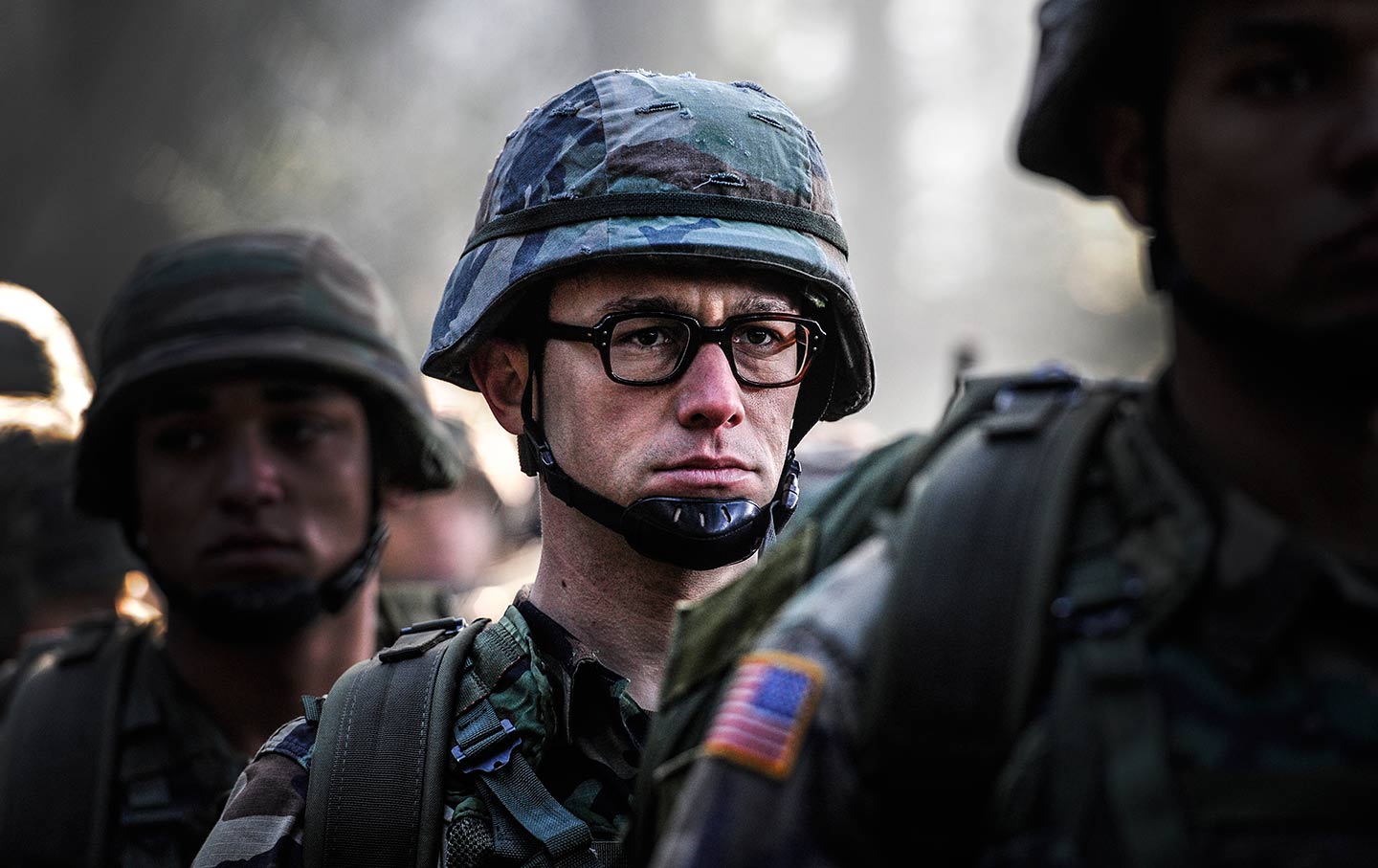 When depicting dissidents or political troublemakers, Hollywood usually calls on one of two character types. The first is the moral visionary, the Joan of Arc or Martin Luther King Jr., who spends their life in the service of a beautiful future, trying to teach others to see it along with them. The visionaries are heroic because they are not like us, because they are saints. The second type is the everyman: the plainspoken, not-more-than-moderately ambitious fellow who sticks up for what’s right because that’s what anyone with a little common sense and decency would do. The everyman is heroic because he is like us—and does something great anyway. Hollywood has sometimes portrayed actual historical figures as both types. Spielberg’s Lincoln is a saint; John Ford’s is an everyman. Although the real Ed Snowden is an international fugitive defined by his arcane knowledge of some of the world’s most secret technologies, Oliver Stone’s Snowden, as played by Joseph Gordon Levitt in Snowden, turns out to be one of us.

He is like us in the film’s opening at Ft. Benning, where he enters basic training in the hopes of serving in the Army’s Special Forces. That training requires lots of running and wall-climbing, plus being screamed at from the break of dawn until lights-out. You and I wouldn’t make it, and neither did Snowden, who breaks his leg getting out of bed one morning and is quickly discharged, which is a huge disappointment. He joins the CIA, hoping to help his country do something about terrorism, and he is like us when he is flattered that an instructor recognizes him as talented and begins to take an interest in the young man’s career. He is like us when his relationship with Lindsay Mills has ups and downs, when he sometimes gets jealous, and when he has sex with her in the usual positions. Establishing Snowden’s relatability takes up chunks of the film’s running time that could be spent on some of the more exciting parts of Snowden’s life, like how he finagled a flight to Russia while stranded in Hong Kong. That adventure is compressed to within an inch of its life in a montage.

Of course, what happens to the everyman in many Oliver Stone films (Platoon, Born on the Fourth of July, World Trade Center) is that he gets disillusioned. Experience undermines the myths around which the hero has organized his—and it’s almost always “his”; Stone has directed just one film with a female protagonist—worldview. Cast out of moral infancy, he loses his bearings and strains his personal relationships to the breaking point. Ultimately, he decides to change his life in accordance with what has been learned. Stone has told the story of a man’s painful awakening from ignorance over and over again.

Beyond “Snowden”’s clumsiness as a film, lies a bigger problem: Oliver Stone’s own arc of disillusionment.

In Snowden, it’s Mills (Shailene Woodley) who first begins to chip away at her boyfriend’s political complacency. Their first-date stroll just happens to take them through an Iraq War protest, which Snowden dismisses as people “lashing out” against the men and women who are trying to keep the country safe. “I’m not lashing out,” Mills, who sympathizes with the protesters, replies. “I’m questioning our government. That’s the principle this country is founded on.” That civics lesson doesn’t transform Snowden’s politics, even if he does admire Lindsay’s feistiness, but he, still new to the CIA, soon encounters the dark side of intelligence gathering in Geneva. Snowden wants to get out from behind a computer screen and onto the front lines of spy craft, and to that end he is asked to befriend a Pakistani businessman, get him drunk in a strip club, and then put him behind the wheel of a car. Snowden balks: Endangering an innocent man’s life for the sake of some tiny intelligence victory is immoral. He doesn’t know the half of it.

Despite Hollywood’s reputation as a depraved bastion of haughty liberalism, the country’s film industry produces jingoistic nightmares like American Sniper much more frequently than works that criticize the government’s conduct in a substantive way. Snowden’s best scene takes place at a Hawaii house party where Snowden’s coworkers, sitting around a lovely fire pit, cautiously acknowledge the immorality of the drone warfare they’re conducting and then bat away the implications of what they’re saying with weak rhetoric about just doing a job. Snowden steps in, noting that after the Nuremberg trials finished dealing with the Holocaust’s architects, prosecutors turned their attention to the rank and file, people who just carried out orders they had no role in formulating. “I’m just saying,” Snowden says. Credit where credit is due: That is not the kind of thing that often appears in a Hollywood film.

Despite all this, I found Snowden to be largely boring and unedifying. The people running the government’s surveillance programs are little more than caricatures, wearing black suits and rehashing tired conspiracy-thriller lines about how Americans want security more than freedom. The depiction of Snowden’s escape from Hong Kong is oddly brief, while newspaper editors argue at some length about when, exactly, they should publish Glenn Greenwald’s first story. The ins and outs of metadata collection and digital surveillance are illustrated via meaninglessly dazzling CGI collages. Stone has always been a bit of a brute-force filmmaker, but in Snowden the force of his subject matter does more to carry the audience’s interest than the means by which he brings it to the screen.

Beyond the film’s clumsiness on the levels of technique and screenwriting, however, lies a bigger problem: Stone’s own arc of disillusionment. Raised by conservative, wealthy parents in New York City, Stone supported Goldwater as a teenager in 1964. Then he insisted on combat duty when he signed up to fight in Vietnam, hoping to prove his masculinity to his father. What he actually found overseas, he told an interviewer, was that war “completely deadened me and sickened me.” On his return to the States, the good son of a Republican stockbroker was “drifting around for a period of time, doing a lot of drugs, a lot of acid, and really kind of at a loss in my life.” Film school at NYU, under the supervision of Martin Scorsese, saved Stone, and it’s clear from the films he would go on to make that both his politics and the way he thinks about the politics of others were decisively shaped by the war and its fallout. With its military uselessness, its persistence long after that uselessness was plain to millions, and the thousands of traumatized veterans it spat back onto the streets of American town and cities, the Vietnam War was an experience of disillusionment for the culture as a whole. It rebuked the patriotic bromides that had saturated public discourse ever since the American triumph in World War II, and it called into question the entire rationale of the fight against Communism. That experience of mass sobering was a crucial one, and Stone has done a real service in documenting its 20th-century manifestations.

However, the problem with politics today is not that people are insufficiently disillusioned. Two-thirds of Americans believe the country is headed in the wrong direction; both candidates in this year’s presidential election were historically unpopular; a majority of young people say they disapprove of capitalism—the list goes on. The forces currently paralyzing political progress lie elsewhere, and in Snowden, Stone misses them. Snowden’s passage from patriotic, techno-libertarian oddball to crusading anti-surveillance activist is the least interesting thing about him. Snowden’s real achievement is that he found a way to make the government pay attention to a citizen who thought there was something wrong with how the “War on Terror” is being carried out. Working inside a government that provides its citizens with no avenue for meaningfully registering disapproval of the “War on Terror,” Snowden decided to make an avenue of his own and then face the consequences of that decision.

As future dissidents look for new ways of making the government finally pay attention to those it represents, they will look to Edward Snowden (and his predecessor, Chelsea Manning) for inspiration and assistance. They just won’t be looking to the version of Edward Snowden who appears in Oliver Stone’s film. When Gordon Levitt as Snowden finally makes it out of his NSA workplace with the pilfered files in hand, he smiles beatifically in slow motion. Then Stone films Snowden from behind; the hero slowly disappears into a blur of sunlight, as though the whistle-blower were being whisked straight up to Paradise. Despite an epilogue in which the real Edward Snowden appears on camera and delivers a TED Talk, the implication of that culminating scene is that Snowden’s work is done. That’s what’s frustrating about Snowden: Even today, the work Snowden took up is just beginning.