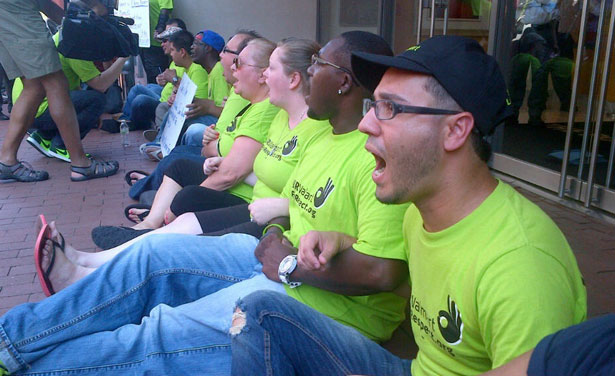 Activists have long criticized Walmart for failing to pay its employees living wages, and instead relying on the state to step in and pay for the healthcare and food of workers. In Canton, Ohio, another Walmart recently demonstrated this kind of corporate welfare by holding a food drive—for its own employees.

Understandably, the food drive has sparked outrage in the area.

“That Walmart would have the audacity to ask low-wage workers to donate food to other low-wage workers—to me, it is a moral outrage,” Norma Mills, a customer at the store, told the Plain Dealer.

A company spokesman defended the drive, telling the Plain Dealer it is evidence that employees care about each other. And it’s a good thing they care about their fellow workers because Walmart certainly doesn’t care about its employees.

In the wake of the Ohio Walmart food drive story, Strike Debt, an offshoot of the Occupy Wall Street movement, raised on interesting question on Twitter: “Why not just pay a living wage?”

Stephen Gandel, a senior editor at Fortune, recently penned an op-ed in which he argued Walmart could afford to give its employees a 50 percent raise without negatively affecting shareholders.

I called a couple of really smart economists to get it “peer”-reviewed. Sendhil Mullainathan, who teaches at MIT and received a MacArthur genius grant for his work in behavioral economics a few years ago, said he basically came to a similar conclusion as mine a few years ago. He says companies have more discretion in setting wages then they let on. “Really the question is not whether this is possible but why some companies don’t do it [this way],” says Mullainathan.

Workers have already announced plans for “widespread, massive strikes and protests” on Black Friday at Walmarts this year, but smaller, isolated protests have continued to erupt all across the country even before the holiday shopping season.

Randall Lewis, 24, has been working at a Chicago Walmart for about a year. Lewis participated in last week’s strike that involved three Chicago store locations.

“Sometimes I have to borrow money. Sometimes, if I don’t have money for deodorant, I have to ask my grandmother for some money. Going to the doctor is expensive because I have to go to a clinic, and if I go to the dentist, it’s expensive,” he says.

Lewis expressed disillusionment with Walmart, a company he once saw as a reliable way to make a living.

“They sell you a bill of dreams, telling you you can be promoted, but if you’re not kissing up to the right person, to the right manager, they will walk right past you like you don’t exist.”

He also suspects the company has nefarious motives for reducing employee hours.

“I worked forty hours [a week], and they reduced me to thirty-two hours a week. I think they reduce the hours to avoid paying us health benefits.”

In 2011, Walmart substantially rolled back coverage for part-time workers and significantly raised premiums for many full-time staff, citing “rising costs.” The decision had an immediate, and detrimental, effect on Walmart stores. By largely using part-time staff, the company was unable to keep its shelves stocked, and began to lose customers, so they decided to add more full-time workers for the holiday shopping season this year.

Walmart workers continue to demonstrate extraordinary bravery by striking all across the country, even though the company has demonstrated a habit of retaliating against staff’s attempts at collective organizing.

For his part, Lewis says he is willing to take that risk:

“I was afraid that they might retaliate, but the one thing I’ve learned is, if I don’t stand up for what I believe in, nothing will be done. I’m doing something that could help me and my co-workers get a liveable wage, healthcare, the respect that we deserve.”

Correction: An earlier version of this article incorrectly stated the Walmart was in Cleveland, Ohio.