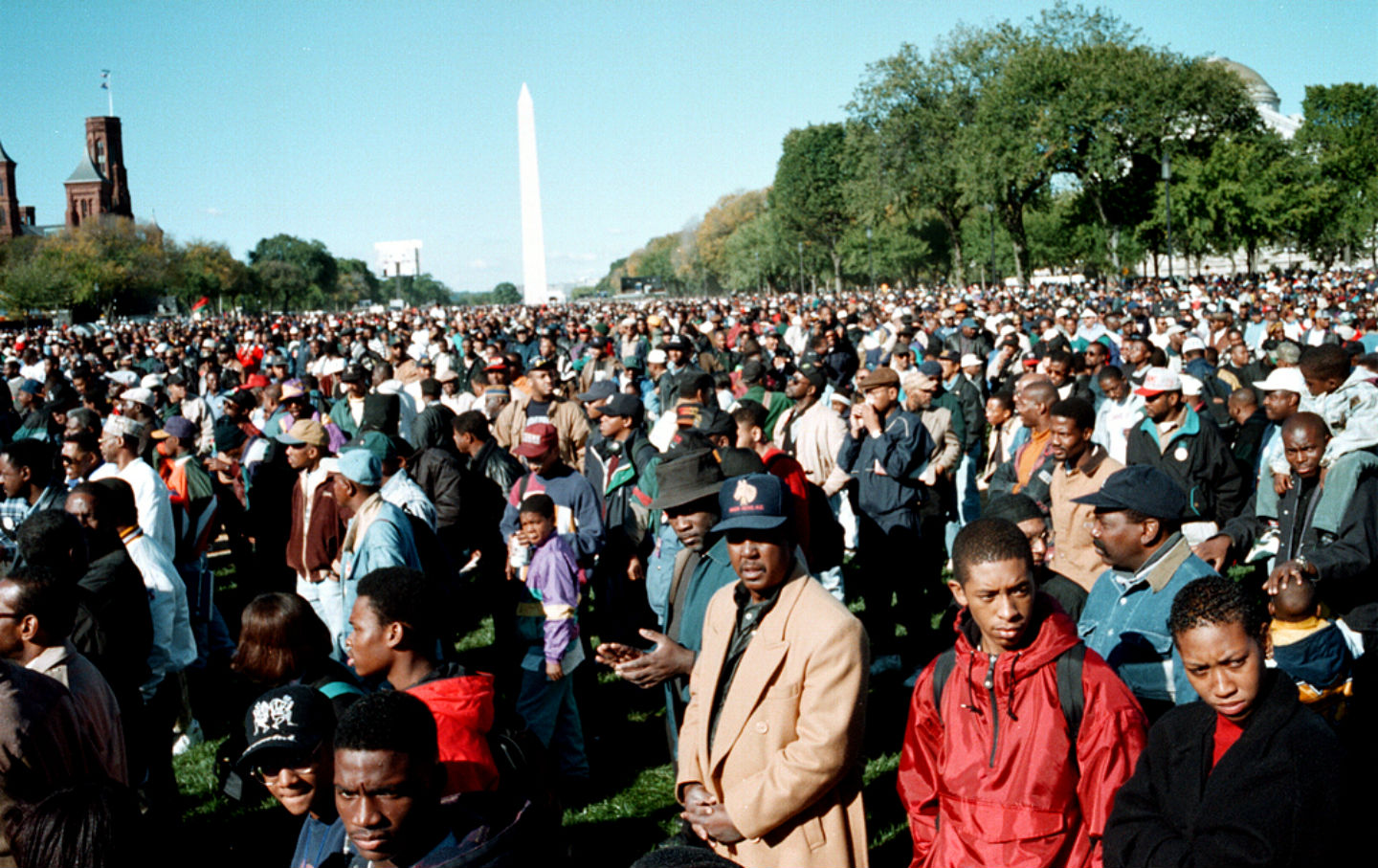 The Million Man March, with the Washington Monument in the background. (Wikimedia Commons / Joacim Osterstam )

On this day 20 years ago, Louis Farrakhan hosted the Million Man March in Washington, DC. Organized around Farrakhan’s belief in black economic self-determinism, and retrograde notions about gender roles, the march put progressives like those at The Nation in a difficult spot. In an editorial, “Outmarching the Hatred,” the magazine tepidly endorsed the march, while maintaining its longstanding critique of Farrakhan, best stated four years earlier in a two-part essay by Adolph Reed Jr.

The event’s leadership and underlying politics made the Million Man March a hard pill to swallow for many observers. Its leaders seemingly intended to reject the principles of the integrationist civil rights movement, and they suggested that women stay home to foster “the value of home, self-esteem, family and unity.” Yes, the march’s dedication to individual responsibility turns on its head the devastation wrought by the attack on black America in the past fifteen years. And yes, Louis Farrakhan remains a demagogue, a reactionary who except for the color of his skin would be welcomed by the Contract crowd. But the march itself was not an unequivocal victory for patriarchy or separatist nationalism. Women and whites who did attend were welcomed by the crowd.…

Most marchers went to Washington out of a desire for self-renewal and rededication to community—a desire to do something, to act, in the face of black America’s economic misery and political isolation.…

Thus whatever its misogynous and separatist underpinnings, this march drew on a well of community-based black activism. It is perhaps not so immediately recognizable as the lobbying and legal battles through which the remnants of the integrationist civil rights movement have exerted much of their energy, but it is activism nonetheless, of a potentially powerful sort. The real danger of Farrakhan is not that he will somehow turn these committed people into bigots. It is that in desperation and anger black activists will heed his call for economic self-determination and make that their centerpiece. Farrakhan has always understood that poor and working-class African-Americans are as vulnerable as anyone else to the sparkling Horatio Alger promise of quick entrepreneurial prosperity; hence the dollar bills waved in the air from the podium by his aides, and his call for an insular black economy. That was always an illusory promise, and now, in a global economy, it is a dead end. The best hope for black American communities, as both Lani Guinier and Jesse Jackson have argued, is to end the political and economic isolation into which they have been cast. Otherwise, the genuine spirit of renewal that motivated many who marched will turn into yet another betrayal.

Immediately following this editorial in the issue of November 1995, The Nation published a dissenting opinion by Kenneth Warren, a professor of English at the University of Chicago, who wrote: “Prior to this march many of us would have assumed that the dismantling of patriarchy had become a cardinal tenet of progressive politics. Apparently not. For by the time we had listened to all of the tortured logic and opportunistic argumentation from erstwhile allies, there seemed to be no reason to get particularly worked up over a Victorian-era justification of separate spheres for women and men. So much for principled opposition…. The fact is, from the nineteenth century onward we’ve seen the limited efficacy of movements premised on racial uplift. These dismiss claims on the state as symptomatic of a ‘slave mentality’ and stigmatize blacks at the bottom of the pecking order as lacking initiative. We also know that simplistic readings of race in America will always find the putative lack of self-help, self-improvement and self-reliance among black populations an appealing explanation of inequality. Nothing surprising here. What is surprising is how discombobulated many of us can be when confronted with the same-old same-old.”