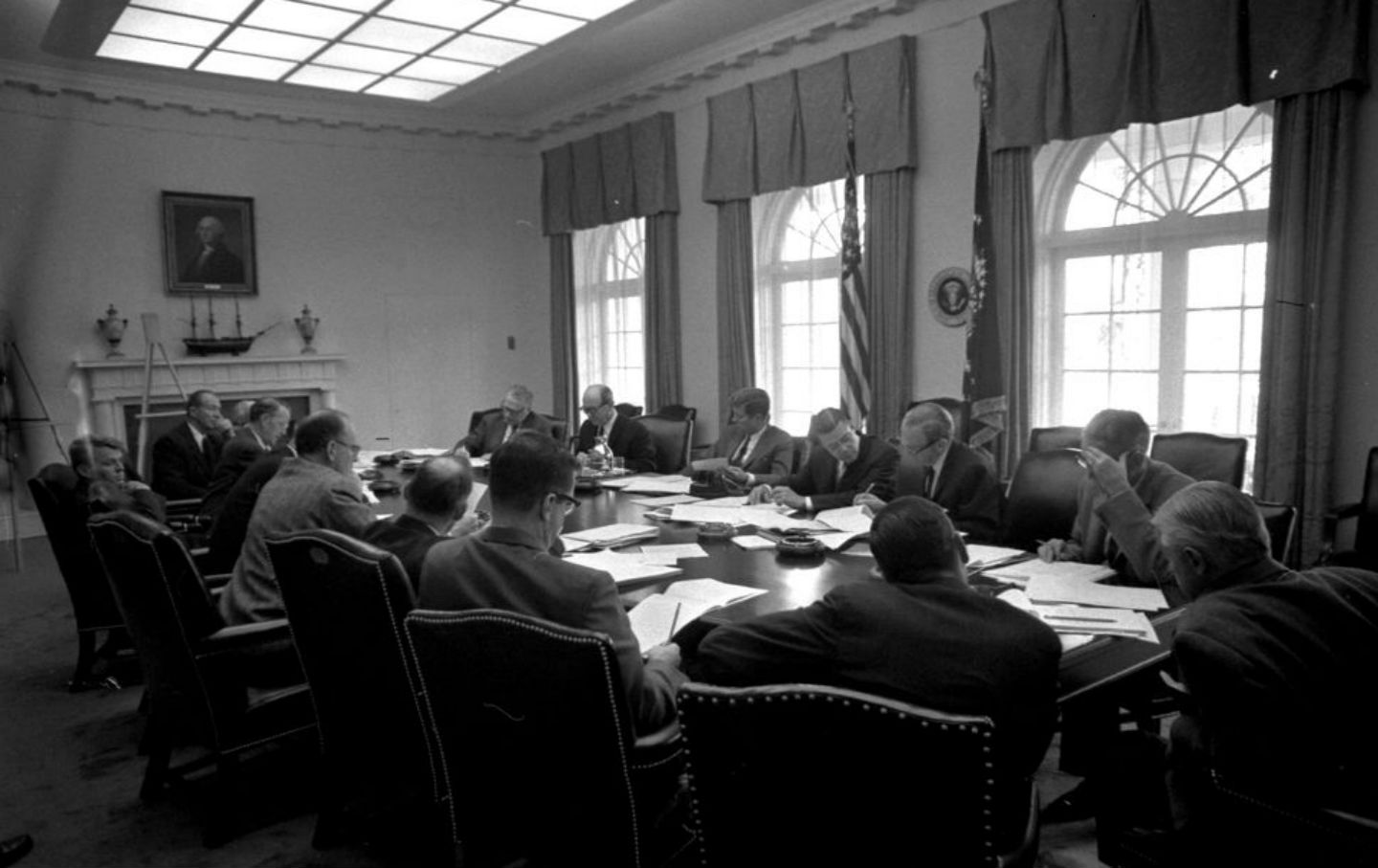 The Cuban missile crisis began when a US reconnaissance plane photographed missile installations in Cuba on October 14. President Kennedy was informed on October 16, the public on October 22. From there events moved very quickly, and The Nation, as a weekly journal, was not quite able to keep up. Its editorial from the issue dated October 27, for example, questions whether Cuba was necessarily really “the loudest issue” of the upcoming congressional election, as Newsweek claimed; but it was referring not to the developing crisis but to the question of whether the United States should invade to overthrow Castro and destroy the Communist threat in the Western Hemisphere. It was clearly written and published before Kennedy’s speech to the nation about the crisis, on October 22, and must have made for some thoroughly uninteresting reading when it arrived in readers’ mailboxes during a week in which potentially cataclysmic news about Cuba filled the daily papers. By the time subscribers received the next issue of the magazine, in which the following editorial, “After Quarantine,” appeared, the crisis was probably already over. If weeklies appear, in real time, somewhat awkward as they try to keep readers apprised of breaking news, they make for fascinating reading over a half-century later, capturing the uncertainty and the fear of those fateful 13 days perhaps even more so than the records of the dailies, with their duty to record the known and not its frightening shadow, the unknown.

There are two basic aspects to the President’s action announcing a “quarantine” or limited blockade of Cuba. One has to do with the wisdom of the decision itself, the other with the method and manner—the phrasing, staging and timing—of the decision. As to the decision itself, any commentator or for that matter, any citizen, is at a distinct disadvantage since—at least at this juncture—only the President and his advisers can see “the big picture”; only they possess the full available information, only they can see the ramifications and interrelationships of the power equation. But this consideration does not mean that comment should be withheld; it merely means that it has to be offered with reservations and with a stated willingness to modify conclusions which later prove to have been based on faulty or inadequate information. Comment must also be made in full recognition and appreciation of the President’s awesome responsibilities and in a spirit that does not attribute to him any motive other than a determination to do his full duty under the Constitution. So much is obvious.…

If, as Mr. Lippmann points out, we are in the process of adjusting to the new realities that have arisen in the 1950s—the principal one of which is that the balance of power has shifted in the world (and not necessarily to our long-term disadvantage)—then it well may be that the old framework within which the cold war was confined must now be stretched to take into consideration these new realities. It goes without saying that both sides in the cold war must adjust to these new realities. In this perspective, the President’s decision, despite the inadequate justification which he has offered for it, may set in motion a process of readjustment which will reduce tensions. Foremost among the hard realities—one which has now been breathtakingly demonstrated—is the fact that thermonuclear war is not, as the world has been saying, unthinkable; quite the contrary, it is perfectly thinkable. Let no one mistake the fact.