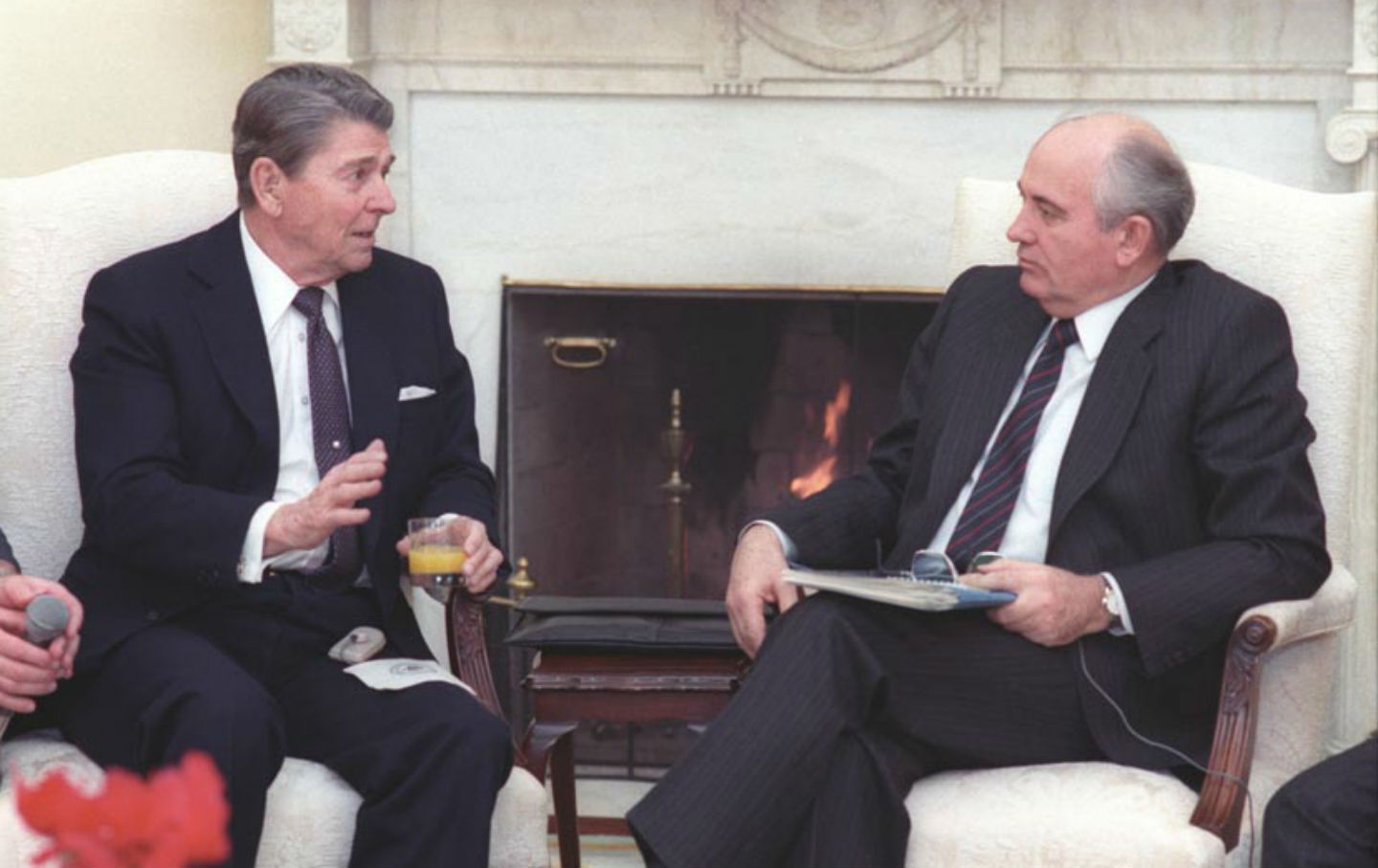 President Reagan and Soviet General Secretary Gorbachev having their first meeting in the oval office at the White House. (Ronald Reagan Presidential Library)

The Reykjavik summit talks, which began on this day in 1986, broke down when Soviet leader Mikhail Gorbachev insisted that American research for the Strategic Defense Initiative—a k a “Star Wars”—be strictly confined to laboratories for ten years; Reagan refused. Alexander Cockburn wrote in his Nation column that it would have been folly to assume that Reagan might walk back his principal political commitment of the last several decades: specifically, that unbridled arms developments and hostility to the Soviet Union could lead to peace.

So much for Reagan’s place in history. It’s been an axiom of those holding a kindly or evolutionary view of the President’s political consciousness that in the end a sense of responsibility to children as yet unborn and history books as yet unwritten would incline him to strike a deal with the Soviet Union on arms control. Along the road to Reykjavik almost all the pundits, editorialists and “news analysts” had taken the same line: the President was accessible to reason. They were wrong, and those who held the steady-state view of Reagan’s political consciousness—that it was, is and always will be a shriveled affair—were right. The President did the wrong thing as he always will. There is no “moderate wing” in the State Department or the Arms Control and Disarmament Agency. They are all Richard Perles. This Administration came to office with the intent of destroying arms control and it has succeeded. Those who persist in believing otherwise are either fools or placement.…

The final instrument of destruction at Reykjavik was, of course, the Strategic Defense Initiative. To preserve this program the Reagan Administration was prepared to forfeit the only substantial cuts in the history of nuclear weaponry. As Gorbachev remarked, “only a madman” would sign an arms agreement that permits one party to press forward with an entirely new generation of space-based weaponry. If only madmen would accept this offer, the corollary is that only madmen would make it. So, is the Reagan Administration made up of madmen? Not if viewed from the moral coordinates of postwar U.S. policy. It is not nor has it ever been postwar U.S. policy to permit the Soviet economy—always operating under severe production constraints—release from the arms race to increase capacity for peaceful purposes. It is not nor at the most fundamental level has it ever been postwar U.S. policy to relinquish the ambition of superiority in the arms race. And it is not nor has it ever been U.S. policy to shift the domestic economy from the underpinning of Keynesian military expenditures that have sustained it since the run-up to the Korean War. Hence the Administration’s determination to cling to Star Wars.