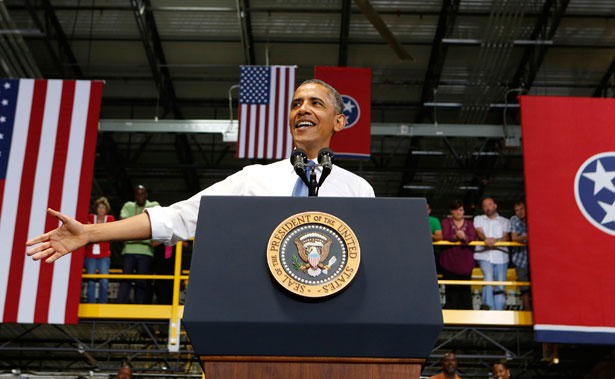 Following a months-long campaign by progressives inside and outside of Washington, President Obama will sign an executive order designed to raise the minimum wage for federal contract workers to at least $10.10 an hour, The New York Times reported Tuesday morning.

Obama will announce and explain the order during his State of the Union address Tuesday, likely weaving it into larger themes about raising the national minimum wage and reducing income inequality. Progressive activists, striking federal workers and some members of Congress had been urging Obama for months to take this action.

More than 500,000 employees of federal contractors make less than $12 per hour, according to a study by Demos, and when the National Employment Law Project surveyed 500 federal contract workers, it found that more than 70 percent made less than $10 per hour. In short, taxpayer dollars are being used to pay a minimum wage that’s clearly too low, and that is accelerating the already problematic wage gap nationwide.

Obama’s executive order aims to change that—it would direct federal agencies to give contracting preference to contractors that pay at least $10.10 per hour. Naturally, this won’t affect workers currently on a government contract, since those papers have already been signed. But going forward, several hundred thousand new contract workers or those operating under revised agreements will get a raise.

Liberals who had been pushing for this change applauded the move, and expressed hope it would move the ball forward on increasing the minimum wage more broadly. “I think most Americans would agree that taxpayer dollars should not support companies that pay poverty wages,” said Senator Tom Harkin, who is the co-author of a bill to raise the minimum wage nationally to $10.10, in a statement. “This Executive Order is a strong step in the right direction, and I am grateful for President Obama’s leadership. But as I know the President would agree, it’s only a first step.”

Senator Bernie Sanders sounded similar notes. “The president has made it clear that employees working for government contractors should not be paid starvation wages. This executive order also gives us momentum for raising the minimum wage for every worker in this country to at least $10.10 an hour,” he said.

Aside from the obvious beneficial effect to future government contract workers, there is a political dimension to Obama’s move. He asked Congress to raise the federal minimum wage in last year’s State of the Union, and there was no progress.

By doing it himself without Congress for the workers he has power over, Obama is sending a message to members: if you don’t act, I will use my executive power to do as much as I can without you. This is reportedly going to be a broad theme of Obama’s speech, and one he hopes will spur Congress to act.

Watch Next: Katrina vanden Heuvel’s predictions for the State of the Union.