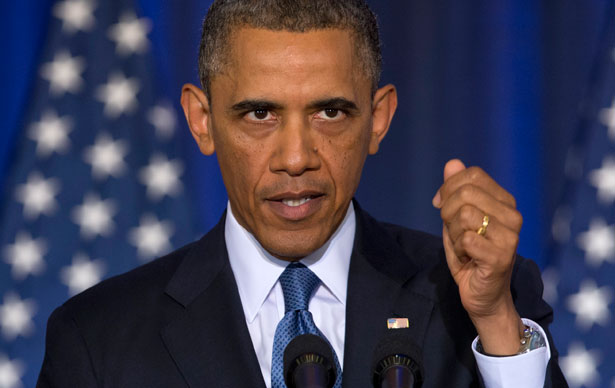 Already the right-wing and hawkish critics are shrieking, and the centrist and right-leaning pundits on CNN are saying that the president didn’t try to answer his neoconservative opponents, but President Obama’s speech to West Point graduates was a powerful defense of the notion that war is not the answer.

In his five years in office, Obama hasn’t always lived by those words, needless to say—having twice escalated the war in Afghanistan before winding it down, having stepped up a worldwide war by drones against terrorists and wrongdoers, and having engaged in an undeclared war in Libya. (In the comments section, feel free to add other examples.) But in the main, Obama firmly and repeatedly declared that American military power should not be the solution to each and every problem. Indeed, the president even slammed interventionists on the “left,” which may or may not have been a knock against the liberal interventionists who inhabit the misguided world of the “responsibility-to-protect” doctrine.

The glaring hole in Obama’s speech was his continued defense of America’s drone wars: “When we have actionable intelligence, that’s what we do.” But throughout his speech, Obama said, again and again, that he will use force—that is, troops and planes and ships—only as a very last resort. It is, indeed, refreshing to hear that from the commander in chief, especially in the face of continuing pressure from hawks, neoconservatives and pro-military flag wavers for the president to get tough in Syria, Ukraine, the South China Sea and Afghanistan.

Trying to distinguish himself from “self-described realists” who say that crises in Syria, Ukraine and Africa “are not ours to solve,” Obama added that he also differs with “interventionists on the left and right” who say that the United States’ “willingness to apply force around the world is the ultimate safeguard against chaos.” He added:

But to say that we have an interest in pursuing peace and freedom beyond our borders is not to say that every problem has a military solution. Since World War II, some of our most costly mistakes came not from our restraint, but from our willingness to rush into military adventures—without thinking through the consequences; without building international support and legitimacy for our action, or leveling with the American people about the sacrifice required. Tough talk draws headlines, but war rarely conforms to slogans. As General Eisenhower, someone with hard-earned knowledge on this subject, said at this ceremony in 1947: “War is mankind’s most tragic and stupid folly; to seek or advise its deliberate provocation is a black crime against all men.”

After saying that he is “haunted” by the deaths and injuries suffered by the men and women that he’s sent into combats, Obama said:

I would betray my duty to you, and to the country we love, if I sent you into harm’s way simply because I saw a problem somewhere in the world that needed fixing, or because I was worried about critics who think military intervention is the only way for America to avoid looking weak.

Perhaps the best line of the speech—are you listening, John McCain?—was this one: “Just because we have the best hammer does not mean that every problem is a nail.”

Obama asserted that he’s ready to use force when allies are on board, in the context of United Nations support, and under the umbrella of international law—and, although the drone strikes don’t abide those rules, Obama appears to be making an exception for drone attacks as opposed to Iraq-style, or Afghanistan-style, combat. As he put it, “A strategy that involves invading every country that harbors terrorist networks is naïve and unsustainable.”

Instead, Obama announced a $5 billion plan to support counterterrorism programs in other countries, helping to train, advise and equip nations in Africa and Asia in fighting terrorists in their own neighborhoods. This, of course, could lead to a vast expansion of America’s military presence abroad, if handled wrong. But, handled correctly, it could keep the United States out of wars in Africa, the Middle East and elsewhere. At least Obama recognized that many of the decentralized Al Qaeda affiliates around the world have “agendas focused in the countries where they operate,” which “lessens the possibility of large-scale 9/11-style attacks against the [US] homeland.” Here’s how Obama described his idea:

Earlier this year, I asked my national security team to develop a plan for a network of partnerships from South Asia to the Sahel. Today, as part of this effort, I am calling on Congress to support a new Counter-Terrorism Partnerships Fund of up to $5 billion, which will allow us to train, build capacity, and facilitate partner countries on the front lines. These resources will give us flexibility to fulfill different missions, including training security forces in Yemen who have gone on the offensive against al Qaeda; supporting a multinational force to keep the peace in Somalia; working with European allies to train a functioning security force and border patrol in Libya; and facilitating French operations in Mali.

Interestingly, and to the outrage of a semi-apoplectic Christiane Amanpour on CNN, Obama didn’t announce any new plan to arm and train the Syrian opposition, even though such a plan had been rumored for the speech. It may yet happen, especially if operated covertly by the CIA, already much engaged in training Syrian rebels in Jordan. But Obama called the war in Syria “increasingly sectarian,” warned about “the growing number of extremists who find safe-haven in the chaos,” and pledged to help “confront terrorists working across Syrian borders”—terrorists, that is, who are part of the anti–Bashar al-Assad forces. Unfortunately, and without giving any specifics, he said: “I will work with Congress to ramp up support for those in the Syrian opposition who offer the best alternative to terrorists and a brutal dictator.” But he then countered that with an emphasis on a political deal to end the war, which of course means working with Russia and Iran, Assad’s main backers:

And we will continue to coordinate with our friends and allies in Europe and the Arab World—to push for a political resolution of this crisis, and make sure that those countries, and not just the United States, are contributing their fair share of support to the Syrian people.

So read the whole speech. Sometimes when Obama speaks, it’s like he’s giving a pep talk to himself: “Yeah, this is what I believe, what I stand for! Why can’t I live up to it?” Maybe he’ll listen to himself more closely.