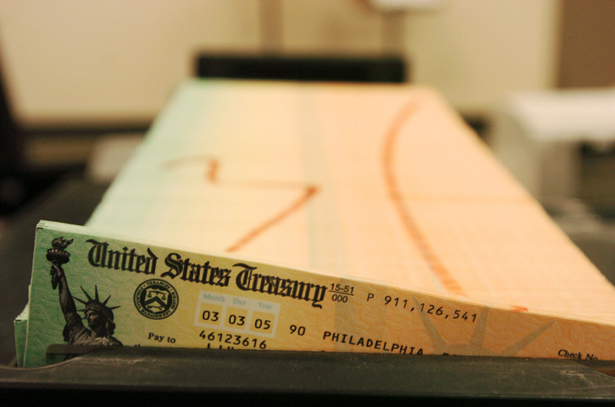 The White House budget for fiscal year 2015 will not include cuts to Social Security in the form of a Chained-CPI formula to calculate inflation, the Associated Press reported on Thursday. The proposal was included in last year’s White House budget, and Obama has repeatedly offered it in negotiations with the GOP dating back to the 2010 debt ceiling standoff.

The administration was under increasing pressure from liberals inside and outside Congress not to include Chained-CPI in the budget. On February 14, sixteen senators (fifteen Democrats and independent Bernie Sanders) sent Obama a letter asking him not to propose Social Security cuts. On Wednesday, 117 Democrats in the House—more than half the caucus—sent the White House a similar letter. Several progressive groups were also lobbying the White House and rallying members.

The progressive complaints were threefold. One was a simple policy beef. Obama’s proposal from last year would take $9,521 in cumulative benefits from an average 85-year-old on Social Security, even with protections including a small benefit bump at age 75 and protections for the very poor retirees.

After seeing food stamps slashed by $8.5 billion in the recent farm bill and the expiration of long-term unemployment benefits, progressives couldn’t accept that. “These are tough times for our country. With the middle class struggling and more people living in poverty than ever before, we urge you not to propose cuts in your budget to Social Security, Medicare and Medicaid benefits—cuts which would make life even more difficult for some of the most vulnerable people in America,” the letter from Senate Democrats said.

Secondly, many Democrats worried about the political fallout from a Democratic president proposing Chained-CPI in an election year. Even though most GOP members support the change, the head of the National Republican Campaign Committee attacked Democrats last year for wanting to cut Social Security after Obama’s budget was released. This year there was a “significant outcry” from Democrats locked in tight races over the potential proposal.

On that count, liberals may not have as much reason to celebrate. The White House official who leaked the news to the AP also noted that Chained-CPI would remain on the table if the GOP wanted to engage in new budget talks or another “grand bargain.”

In other words, this wasn’t a substantive move away from austerity by the White House, but rather an assessment of the bargaining atmosphere on Capitol Hill.

Liberals plan to keep pushing forward on that larger battle—and want Obama to actually expand Social Security. “The Social Security COLA already doesn’t reflect the real costs seniors face, and cutting it makes no sense,” said Senator Jeff Merkley in a statement. “Middle-class Americans need retirement security they can depend on, and that starts with keeping Social Security’s promises.”

“This is a huge progressive victory—and greatly increases Democratic chances of taking back the House and keeping the Senate,” said Stephanie Taylor of the Progressive Campaign Change Committee. “Now, the White House should join Elizabeth Warren and others in pushing to expand Social Security benefits to keep up with the rising cost of living.”