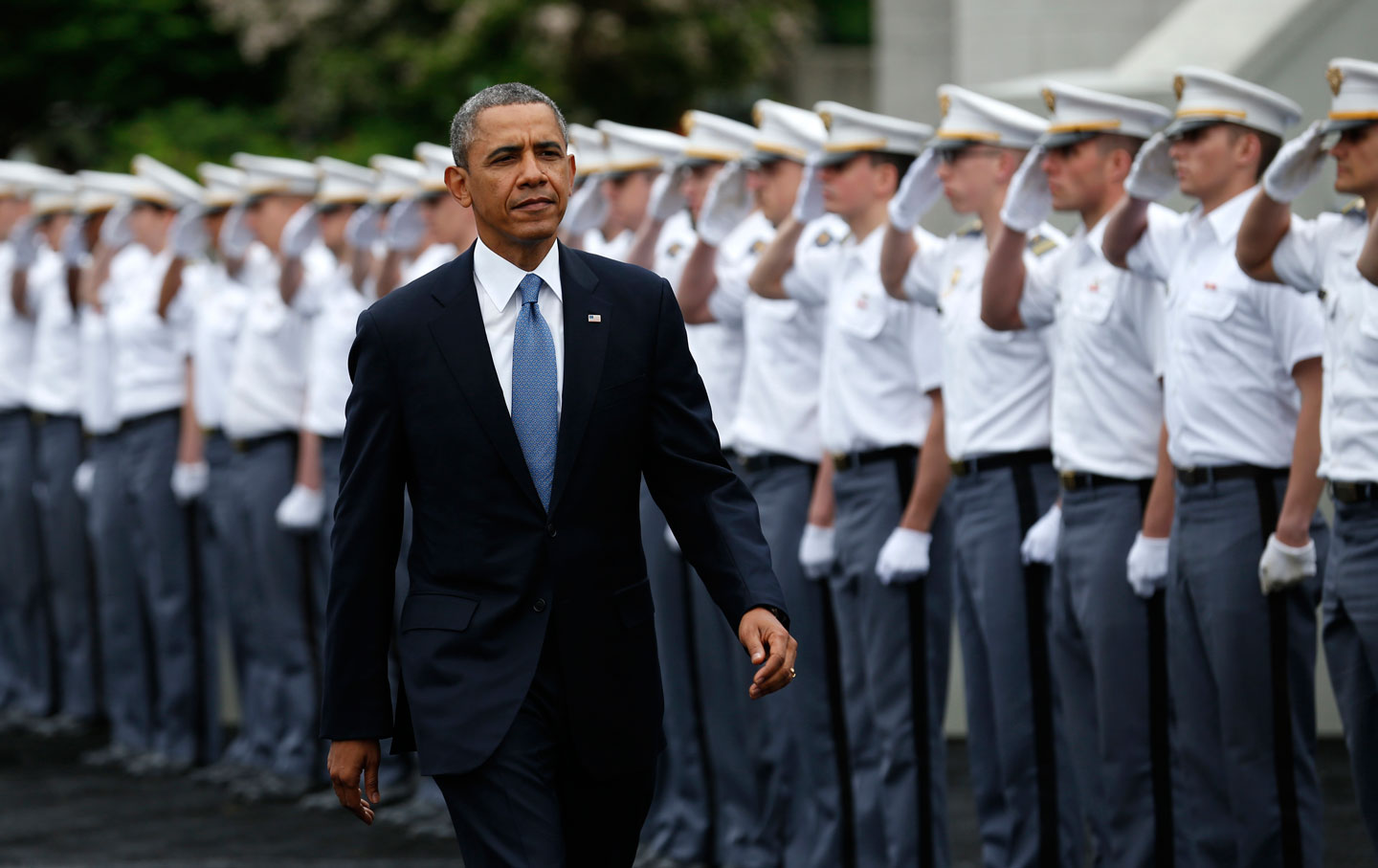 The “real” Barack Obama—the one who no longer has to worry about running for office—turned in another boffo performance recently. Just before his historic trip to Cuba, The Atlantic published Jeffrey Goldberg’s exhaustively reported, nearly 20,000-word autopsy of the president’s foreign policy.

Given the opportunity to speak at length, Obama deftly slices and dices a long-standing sacred cow of the US foreign-policy establishment into ground beef. But Goldberg, a prominent member of this same establishment, goes to considerable length to give the mandarins’ arguments their due. Inevitably, these boil down to the alleged need to deploy US military force almost regardless of the circumstances in order to preserve “credibility,” a word they intone the way some Catholics recite the Rosary.

When Obama picked Clinton as secretary of state, he aborted the foreign-policy revolution he might have begun.

Goldberg frames the piece around Obama’s August 2013 decision not to bomb Syria. The president had termed the use of chemical weapons against the Syrian opposition a “red line,” but when apparently credible evidence appeared that Bashar al-Assad had crossed it (and him), Obama held off on ordering a military strike in favor of asking Congress to weigh in. Ultimately, thanks to a plan worked out by Vladimir Putin, Assad agreed to relinquish all of Syria’s chemical weapons. This achievement, however, was overshadowed by the foreign-policy punditocracy’s concern that Obama had projected weakness. To quote Leon Panetta, Obama’s former CIA director and defense secretary: “Once the commander in chief draws that red line, then I think the credibility of the commander in chief and this nation is at stake if he doesn’t enforce it.”

Back in 2007, then-Senator Obama declared war on this same self-regarding establishment. Unlike most Democrats at the time, he blamed not only Bush, Cheney, and their neocon coconspirators for Iraq, but also “much of Washington,” including “a media that too often reported spin instead of facts [and] a foreign-policy elite that largely boarded the bandwagon for war.” As Derek Chollet, a former top official in the Defense Department, accurately adds, “For Obama, the mentality that led to Iraq was the most prominent example of a systemic breakdown—the result of a distinct mindset that had dominated U.S. foreign policy for too long.”

Goldberg writes that Obama “secretly disdains” the foreign-policy establishment for making “a fetish of credibility.”

Unfortunately, when Obama picked the more hawkish Hillary Clinton as secretary of state, he aborted the very revolution in foreign-policy thinking he might have begun. Clinton appointed her own staff, while the Defense Department remained under the control of longtime CIA officer Robert Gates. Both departments remained filled with retread appointees tied to conventional strategies. Obama handpicked a few advisers like Susan Rice and Samantha Power, but foreign-policy thinkers who shared his commitment to a fundamental realignment were largely left out. He still made the major calls and proved willing to overrule his cabinet officials when necessary. But overall, US foreign and military policy remained stuck in a post–Cold War limbo.

Finally, following a partial pullout from Iraq, a failed “surge” in Afghanistan, the rise of chaos in Syria and Libya (greatly exacerbated by ISIS), thousands of drone strikes, and the hard-fought effort to pass the Iran nuclear agreement, Obama has come out swinging again. We learn from Goldberg that the president “secretly disdains” the DC foreign-policy establishment because he thinks it “makes a fetish of ‘credibility’—particularly the sort of credibility purchased with force.” Obama’s “Liberation Day” came, Goldberg writes, when he refused to go along with the “cruise-missile playbook” on Syria and rejected “the demands of America’s frustrating, high-maintenance allies in the Middle East—countries, he complains privately to friends and advisers, that seek to exploit American ‘muscle’ for their own narrow and sectarian ends.”

The predictable pushback has been intense. The Atlantic offered up a number of complainants, including foreign-affairs editor Gideon Rose, German neocon Josef Joffe, former Bush speechwriter David Frum, and Niall Ferguson, official hagiographer to Henry Kissinger. Aside from Chollet and the always perspicacious Andrew Bacevich, few respondents were willing to reconsider any part of the elaborate ideological edifice constructed to justify America’s most disastrous interventions. Many cannot resist quoting King Abdullah II of Jordan, who apparently said, “I think I believe in American power more than Obama does.” (Nobody noted that it hardly costs His Majesty anything for Americans to fight and die for the preservation of Arab autocracies like his own.)

Typical, alas, is the Brookings Institution’s Shadi Hamid, who asserts against all evidence that Assad “has managed to remove the threat of U.S. military action while giving very little up in return.” (Nothing, that is, except for his chemical weapons.) Hamid often opines, “It may actually be the case that being right on Iraq made you more likely to be wrong about subsequent interventions.” One is reminded of Bill Clinton’s observation that Americans often prefer “strong and wrong” to “weak and right.” But perhaps the most worrisome quote—the one that demonstrates how powerful the credibility doctrine remains despite its failure to promote peace or protect US interests—comes from someone who should know better: “If you say you’re going to strike, you have to strike. There’s no choice.” The speaker? Hillary Clinton.

Bernie Sanders has provided a powerful voice and an enormously useful prod to Clinton and the Democrats on economic issues. One of the questions raised by Goldberg’s piece is who, if anyone, can do the same on foreign policy. Barack Obama has made tentative efforts to pull the United States out of its benighted interventionist mind-set and focus on the true threats we face, like global warming, refugee-manufacturing humanitarian crises, and a jobs-destroying global economic crisis. Americans, as well as the nations that continue to look to America for leadership, can hardly afford to do otherwise.