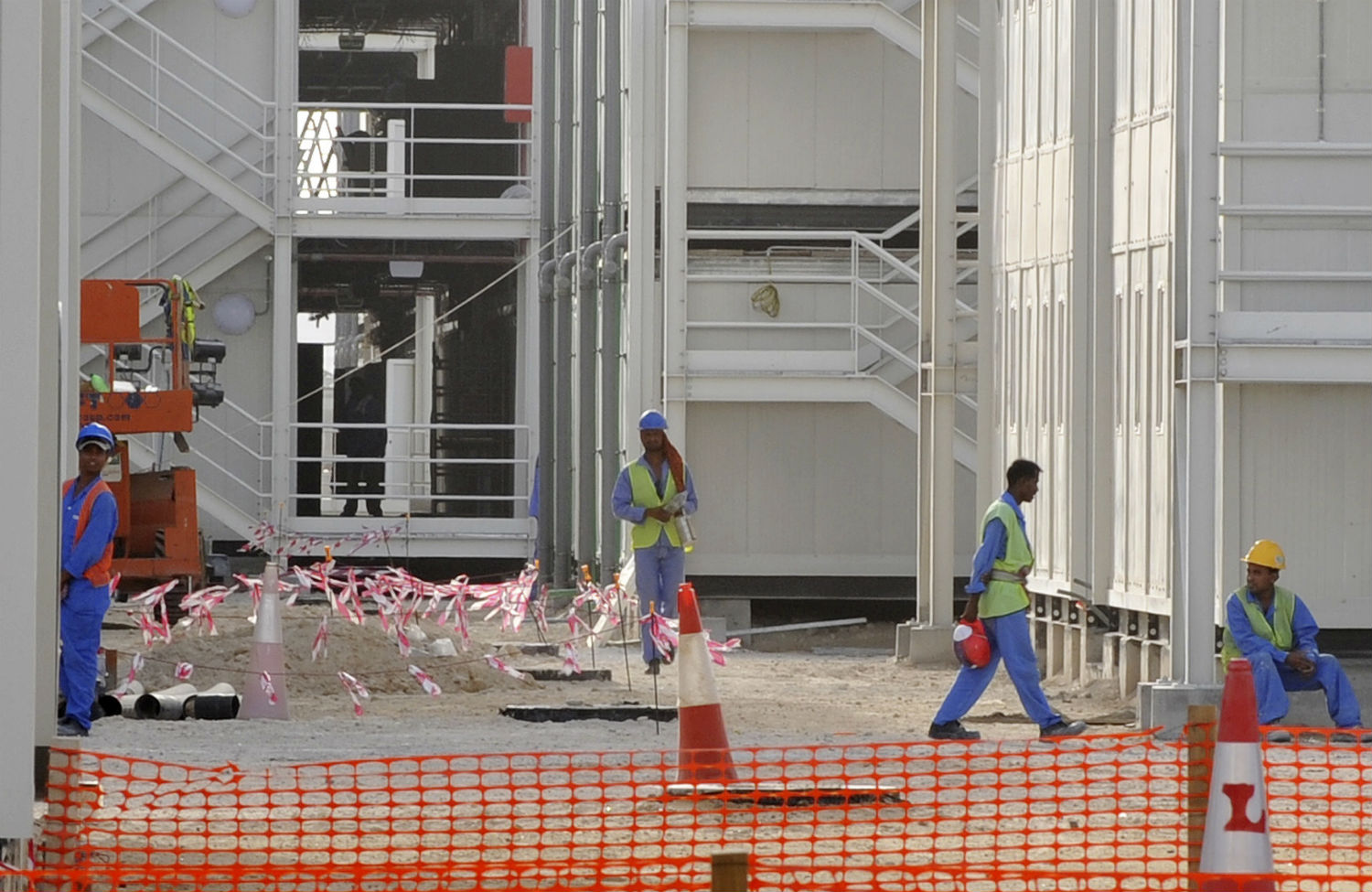 Laborers work on a newly constructed housing village for construction workers on May 17, 2009 in Abu Dhabi, United Arab Emirates.

Last time Andrew Ross embarked on a visit to the United Arab Emirates, he was seeking to help migrants who were being prevented from leaving the country. Now, he can’t get in.

While UAE authorities evidently blocked the visit of the New York University professor citing vague “security concerns,” the abrupt refusal to allow him on the Emirati airline Etihad’s flight earlier this month suggests Ross is one of many activists who’ve gotten on the regime’s bad side for scrutinizing its human-rights track record. While Ross was grounded, the NYU Abu Dhabi campus’s marketing campaign continues to work overtime. One of many university outposts established in the hyper-developing Gulf region, NYU boasts of planting a liberal academic oasis in a money-encrusted authoritarian political landscape.

According to Human Rights Watch’s (HRW) latest report, the migrants who have worked on the NYU site on Saadiyat Island and related developments continue to suffer human rights violations. According to the report, issued last month as a follow-up a five-year investigation

employers are withholding workers’ wages and benefits, failing to reimburse them for recruiting fees, confiscating workers’ passports, and housing them in substandard accommodations. In the most serious cases, contractors working for the two government development entities on the NYU and Louvre sites apparently informed United Arab Emirates (UAE) authorities about the strike, leading to the arbitrary deportation of several hundred striking workers.

Under a repressive labor regime known as the kafala system, the workers’ bondage begins in their home countries through labor recruiters, who regularly impose massive fees that automatically tether impoverished workers to devastating debt, making it nearly impossible to break from an abusive employer. Moreover, they typically cannot exit the country without their boss’s approval.

Reports of epidemic levels of abuse and unsafe conditions at Western-branded mega-projects, from NYU to the Guggenheim to Qatar’s upcoming World Cup, have prompted international condemnation. Yet amid the region’s bottomless oil wealth, money seems to speak louder than “corporate social responsibility.”

Noting that his travel issues are part of a more complex economic and political context, Ross tells The Nation, “A lot of the press this week has been about my predicament and the issues that it raises for academic freedom. But in some ways the more important story is to shed some light on the kefala sponsorship system in the UAE.” Many abuses have been documented over the years, but “they require even more documentation, which is why getting access to the UAE and being able to do interviews with workers is so crucial.”

Meanwhile, HRW’s Nicholas McGeehan, recently observed that the country’s “blacklist” of troublemakers has been growing: “In recent years the UAE has locked up Islamists and liberals alike, deported bloggers, stripped critics of their UAE nationality, and denied entry to academics and nongovernmental groups that have criticized the authorities.”

While “guest worker” programs are widespread globally, activists condemn kefala as an especially severe system of legalized bonded labor fused with a highly lucrative globalized market of workers from Bangladesh, Nepal and other poor Asian countries, in industries ranging from domestic work to construction megaprojects. Yet across the region, commercial interests mixed with geopolitics has helped preserve the system. In the lead-up to the Qatar World Cup, for example, labor advocates have condemned multinationals and global athletics bodies for not taking a firmer stance on workers’ rights, while reports of massive worker death tolls have drawn little action on promised reforms from Qatari authorities.

Since the completion of NYU Abu Dhabi’s construction, it is unclear how the university will address past or ongoing migrant labor problems. A 2014 New York Times investigation however revealed that many workers suffered wage theft and twelve-hour workdays. These abuses reportedly occurred despite NYU’s 2011 code of “labor values,” which, on paper, guarantees wages paid on time, travel allowance, reimbursement of recruitment fees and “4.5 square meters of personal living area.” The university apologized and promised to “investigate.”

The new HRW report confirms the alleged abuse, both at NYU’s site and the nearby Louvre development, notin that some employers “refused to pay the end-of-service benefits…leaving [workers] penniless and vulnerable to arrest and deportation.” And while HRW is not free to investigate independently, it says the officially appointed corporate monitors have largely downplayed the reported labor violations and lax enforcement.

NYU’s campus is designed to bring liberal arts education and liberal ideas to the Gulf, but in response to Ross’s travel ban, both Ross and The Nation received guarded statements from the administration:

As a university we believe in the free movement of people and ideas. We cannot know all the thinking that goes into any immigration authority’s decisions about who is or is not granted a visa, and we’ve had people who were coming to our campus in New York on academic matters who have been denied visas by the US authorities, including one in the last few days. Whenever such cases arise we emphasize the principle of mobility and advocate to the relevant decision-makers that any limitation should be justified by good cause.

While the university is apparently inquiring about “good cause,” Ross argues, NYU President John Sexton “needs to clarify the situation regarding the exact conditions under which academic freedom is going to be protected for faculty and students traveling to and from, and in, Abu Dhabi, and he needs to get some kind of assurance from the authorities that nothing like this can ever happen again.”

The travel ban sheds light on a deeper controversy encircling Saadiyat Island: labor conditions and teaching and learning conditions are connected. With its glossy, petro-financed galleries and academic enclaves, Ross observes, UAE is “trying to buy a big cultural asset. And likewise with NYU, they’re basically buying scholars and intellectuals. And my treatment is just a way of illustrating how illusory that idea is…not everyone can be bought.”

For now, workers and scholars alike might look to some of the migrants for inspiration. The usually tranquil commercial metropolis of Dubai recently saw rare tumult as construction workers protested in the streets, with “several hundred” South Asian migrants blocking traffic in the downtown district. Though police immediately stifled the incident, and those workers may not be free to speak now, their resistance just might carry over the borders of silence, inside and outside the Gulf.