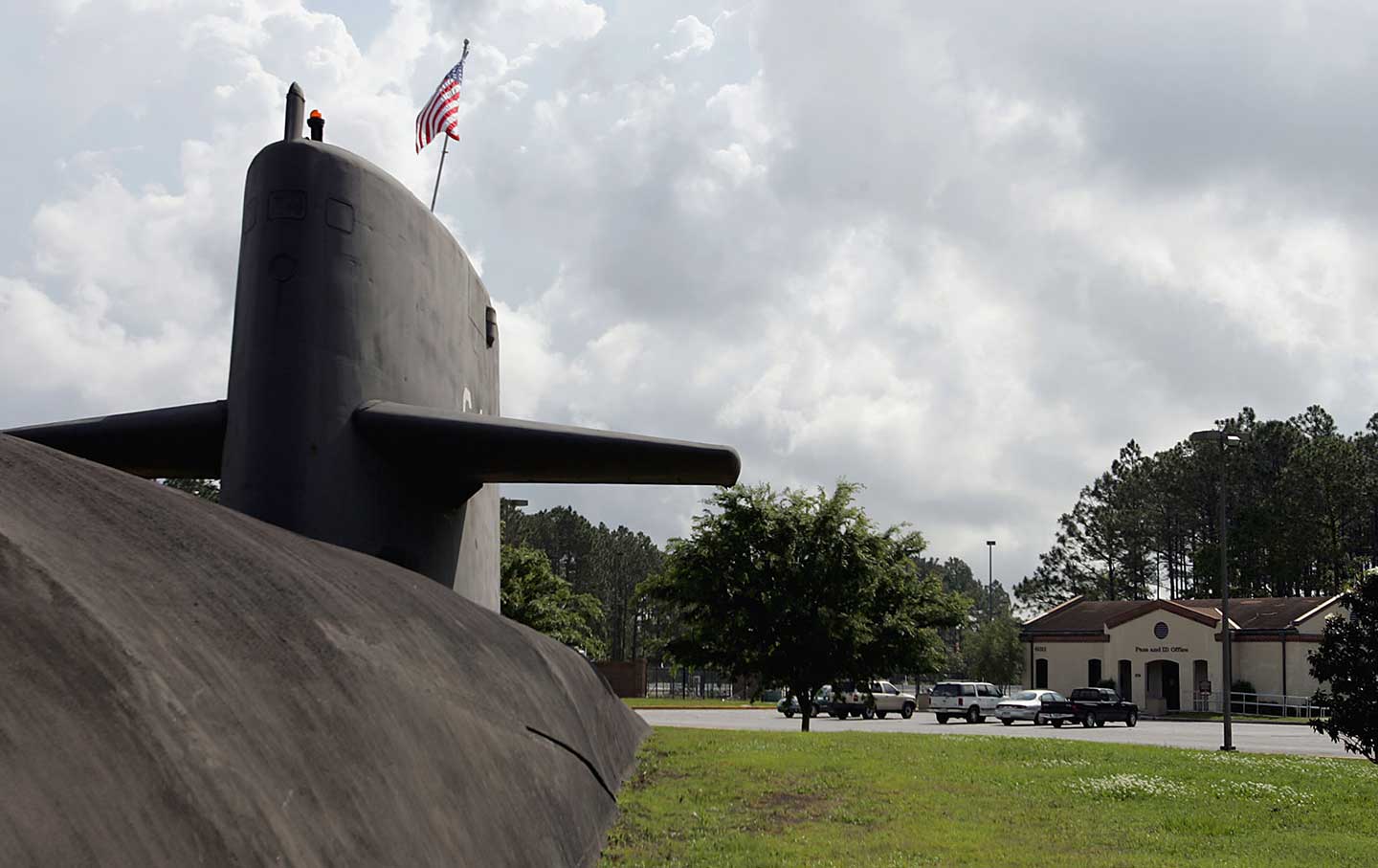 That is the possible fate of seven Catholic anti-nuclear activists awaiting trial for their action on April 4, 2018, at the Kings Bay Naval Submarine Base in St. Mary’s, Georgia—the largest base of its kind in the world.

The Kings Bay 7 chose to act on the 50th anniversary of the assassination of the Rev. Dr. Martin Luther King Jr., in order to lift up King’s analysis of the “triple evils of militarism, racism and materialism.” There are six Trident submarines based at Kings Bay, Each submarine can carry 24 submarine-launched ballistic missiles  designated Trident D5. Each of those missiles can carry up to eight 100-kiloton nuclear warheads (about 30 times the explosive force of the Hiroshima bomb). Plowshares activist Patrick O’Neill, one of the co-defendants, called Trident “the most insidious and evil weapon of mass destruction ever constructed.”

Carrying hammers and baby bottles filled with their own blood, the seven attempted to transform weapons of mass destruction using the ancient metaphors of “swords into plowshares” and “spears into pruning hooks” from Hebrew Scriptures. With their action, they hoped to call attention to the ways in which nuclear weapons kill every day, by their mere existence and maintenance. They are charged with three federal felonies and one misdemeanor for their actions. 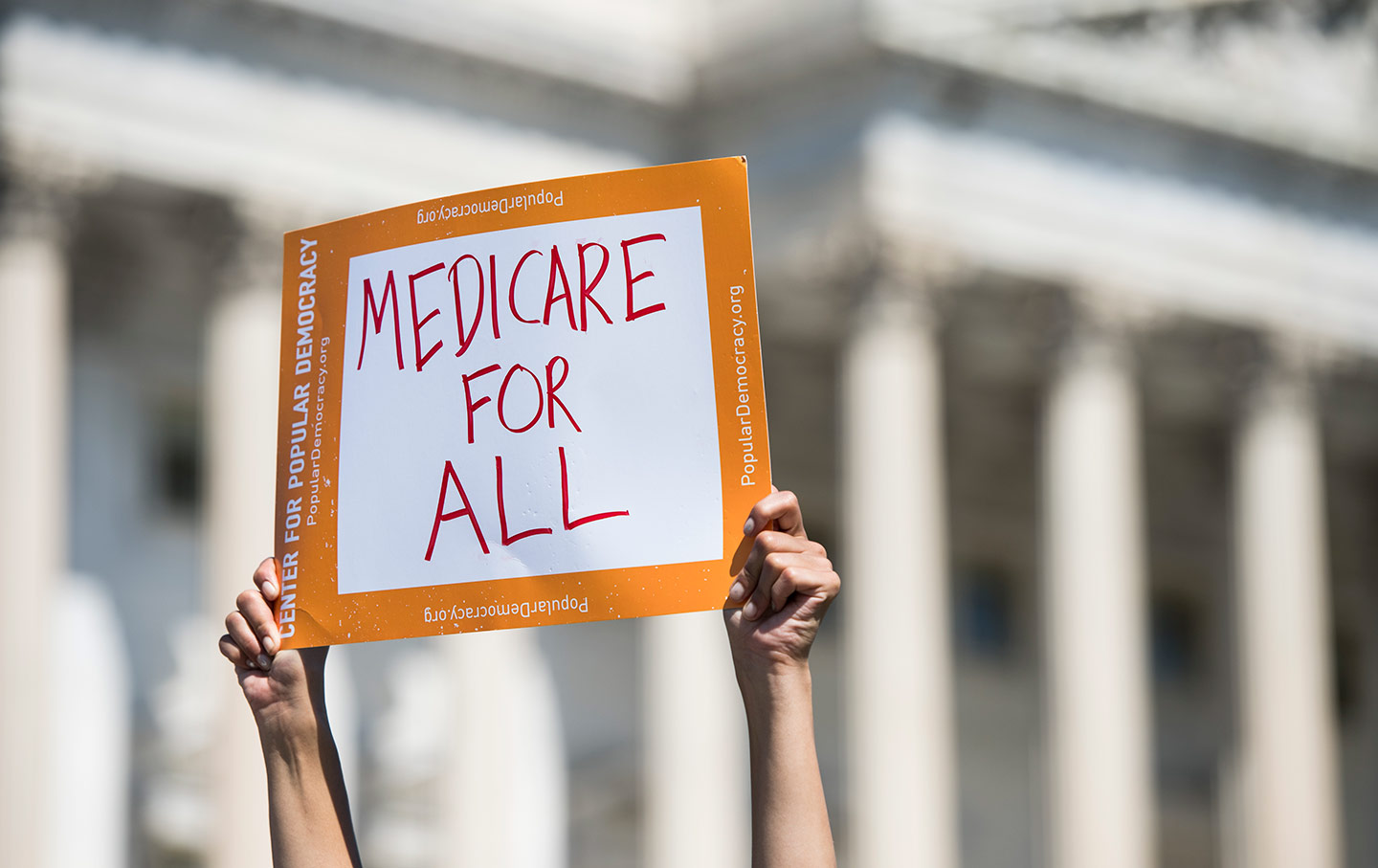 It bears repeating: They could face 25 years in prison if convicted on all counts.

On Sunday, nearly 200 people came to Fordham University’s Lincoln Center campus to hear from the four of the Kings Bay 7 who are out on bond. Clare Grady, Martha Hennessey, Patrick O’Neill, and Carmen Trotta were all able to participate in the event. Father Steve Kelly, Mark Colville, and Elizabeth McAlister (my mother) remain jailed in Brunswick, Georgia.

The event began with a 15-minute excerpt of The Nuns, The Priests and the Bombs. The film focuses on two Plowshares actions—one at a naval base near Seattle in 2009 and another at the Y-12 nuclear facility in Tennessee in 2012—and the role of the Catholic conscience in spurring the activists to this radical form of action.

Helen Young, one of the filmmakers, was present at the event. She hopes that her film encourages the public to pay closer attention. “Sadly,” nuclear weapons have “become the purview of security experts and activists, while the public has remained largely disengaged,” she said, “or not engaged on a level commensurate with the existential threat we face. I believe we all owe a debt of gratitude to the activists featured in this film who have put their lives on the line in an effort to wake us all up and pull us back from the nuclear brink.”

The 2012 action at Y-12 drew widespread media attention and triggered congressional hearings because it highlighted lapses in nuclear-weapons-complex security. As William D. Hartung, the director of the Arms and Security Project at the Center for International Policy noted on Sunday, “The mainstream media coverage and the reaction in Congress were more about how to protect the weapons from protesters than to protect us from the weapons. This rhetoric about safety and security of the weapons complex, and protecting ‘special materials’—a euphemism for ingredients for bombs that can end life as we know it—distracts from the real issue: These are weapons of mass slaughter that must be eliminated before they eliminate us.”

The Kings Bay Plowshares action has not garnered the same kind of front-page, bold-type treatment from the mainstream media, and the event on Sunday was the first time the defendants have been able to appear together and speak publicly about their action.

Carmen Trotta, a longtime member of the New York Catholic Worker, shared that he had never committed a felony before. “I could not not do it,” because they “were all dear friends” and he felt compelled to act. The April 4, 2018, action was the most recent of more than 80 nonviolent Plowshares disarmament actions that have been carried out since 1980. Trotta said that with each action the message is the same: “Nuclear weapons are necessarily evil.” That “message is not what the courts want to hear. But that is the message that we keep bringing.”

Patrick O’Neill, a Catholic Worker and father of eight from Raleigh, North Carolina, told the audience, “At present, we seven are in a lengthy pretrial holding pattern as we await the government’s response to our various motions that argue our actions were a legal response to US deployment of weapons of mass destruction that stand at the ready to bring to an end the human experiment. We and our great team of lawyers are arguing our case on the basis of US law, international law, necessity and the Religious Freedom Restoration Act, to name a few.”

Martha Hennessey splits her time between her family’s farm in Vermont and the New York Catholic Worker, which was founded by her grandmother Dorothy Day. She shared that she was motivated to participate in the action by her time in Iran and Korea and spending time with the people labeled the “enemy” by the United States. After prayer and discernment, “I came to a place of having to personally look at my life, my privilege and where I stand in the world” and take “responsibility for this situation.” The action was “incredible” and the “greatest test of my faith,” she said.

Clare Grady, a mother of two and Catholic Worker activist from Ithaca, New York, participated in the Griffiss Plowshares in 1983 (Elizabeth McAlister was also a member of that action) and talked about the difference between those two actions 35 years apart. Her motivation this time around was “not just the fear of if these weapons are launched,” but also her growing awareness that nuclear weapons “kill every day in the mining and testing on Native lands.” She continued that “We have awakened to the need to attend to something we have neglected,” namely, the intersections of militarism, racism, and materialism.

As the four activists spoke, the larger context of their action came into sharp focus. There is an international, grassroots movement to abolish nuclear weapons, and a landmark global agreement to ban nuclear weapons, known officially as the Treaty on the Prohibition of Nuclear Weapons, was adopted in July 2017. But none of the nine nuclear states participated in the negotiations. Nuclear-weapons spending in the United States continues to rise, and President Donald Trump’s threatening bombast and willful ignorance puts a new, sharper edge on the sword of Damocles President John F. Kennedy warned against so long ago. And, as many of those gathered remarked, anti-nuclear demonstrations are not drawing the million people who crowded Central Park in 1982.

Bill Moyers, celebrated journalist and conscientious newsman, was at the Fordham event and remarked that as the United States is withdrawing from international arms-control treaties and moving us all closer to nuclear midnight, Plowshares actions are an “essential reminder that there is an alternative—a radical alternative—for the protection of the planet.”

The defendants, their legal team, their wide circle of supporters, their families (together, the defendants have 20 children and 16 grandchildren), all hope they can accomplish these critical aims without spending the next 25 years in prison.