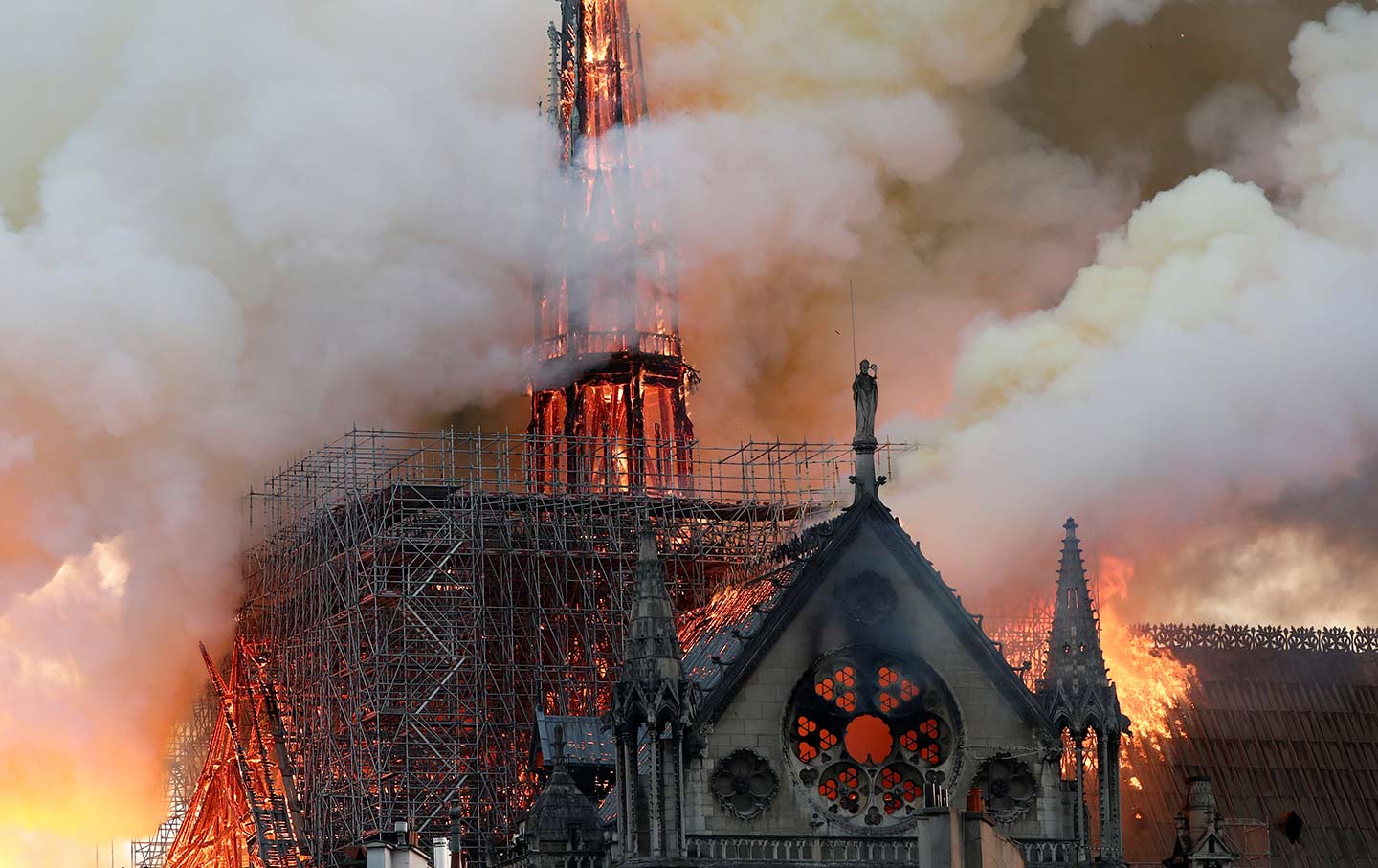 Smoke billows as fire engulfs the spire of the Cathedral of Notre Dame in Paris on April 15, 2019. (Reuters / Benoit Tessier)

On Monday I was leading a lunchtime discussion on the Yellow Vests at the University of Chicago and mentioned that I would be heading immediately back to my room after the talk to hear President Emmanuel Macron’s much-anticipated responses to the protest movement that has dominated the news from France in recent months. Someone in the room said, “Macron’s speech has been postponed because Notre Dame is on fire.” The room, full of French specialists, fell silent, but soon the silence gave way to speculation—was it arson? terrorism? a careless repairman?—and shock, as people pulled out their cell phones and saw the entire roof ablaze and the spire collapsing repeatedly in slow motion.

On my own cell phone, the home-page background image happens to be a picture of the cathedral from the rear, taken from the quay of the Left Bank, recording the happy memory of a summer stroll along the Seine years ago. On the quay that day there had been a Chinese couple, the bride in a spectacular white gown, the groom in black, both attended by a bustling crew of photographers and videographers. I wondered briefly why an evidently wealthy Chinese couple would want to memorialize its nuptials against a background of flying buttresses and gargoyles and stone symbolizing a civilization to which they probably felt little attachment.

This was a churlish thought, however, given that I myself, the American grandson of immigrant Jews from Lithuania and Hungary, had no greater claim than theirs to be at home there. True, I probably knew more French history than they did. As the translator of such eminent historians as Georges Duby, Jacques Le Goff, and Bernard Guenée, I probably knew a lot more about the Middle Ages than they did. I was well-versed in the age of cathedrals, the ogive, and Abbé Suger; in the differences between the flamboyant and the classic Gothic; in the iconoclasm of the Revolution; and the controversial 19th-century reconstructions of Viollet-le-Duc.

And yet, when I saw the live images of Notre Dame ablaze, what mattered was not anything I knew about the cathedral in my head but what I felt, along with millions of others around the world, surely including that Chinese couple, in my heart—namely, grief. It seemed so incongruous. Grief is what we feel when the ephemeral meets its appointed fate, but Notre Dame had always seemed the opposite of ephemeral. Notre Dame, even if it had not always been there, seemed to be rooted permanently in its place in the very center of Paris, on the Île de la Cité, where the Romans had first made camp in what they would come to call Lutetia. Tourists made it a destination, but for me, a sometime Paris resident, Notre Dame was not a destination but a familiar presence—familiar enough that I could take it for granted, even if occasionally, when the spirit moved, I would drop in to experience, among the multitudes with their cameras and Michelin guides, the magnitude of the achievement, the windows, the carvings, the rood screen and altarpiece, and the side chapels with their painted masterpieces and their flickering votive candles offering a rough-and-ready popularity poll of the various saints and their relative healing powers. I liked to sit there, far from the few actual worshipers (since I am the opposite of a believer and was loath to interfere with whatever transactions they were conducting with their Maker), contemplating rather the many makers of the building itself: the masons, wood carvers, glass and metal workers, hoist operators, carpenters, and framers—a veritable epitome of the forces of production, as it were, of an era whose material challenges we can scarcely imagine in our age of facile mechanical reproduction. 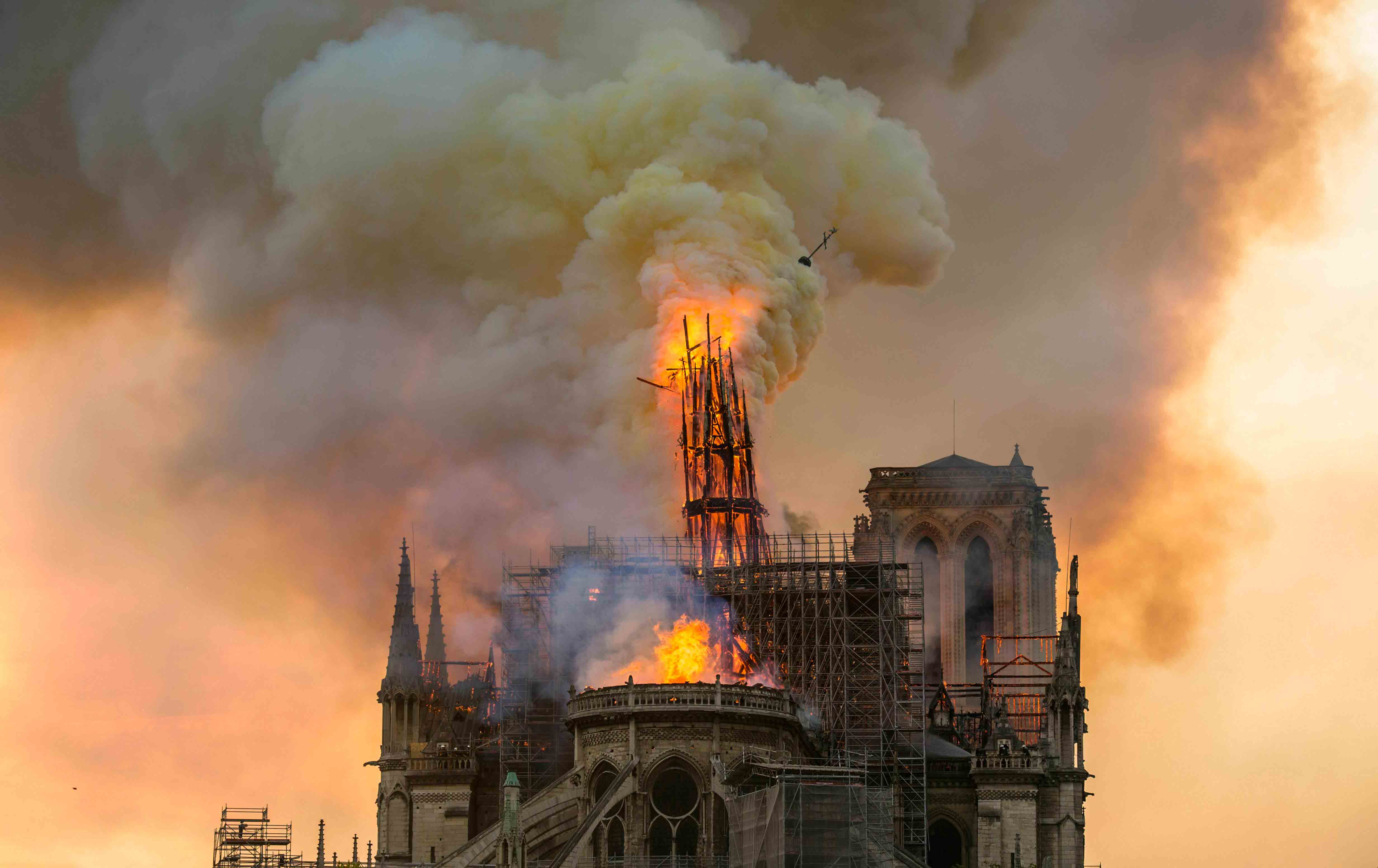 It was those contemplative moments that came back to me with Proustian recall, as all the book-learning drained away. And what I felt was authentic grief. I have been appalled by the loss of two other buildings, the Twin Towers, but I didn’t grieve for them, only for their occupants. The Notre Dame fire was different. The church somehow embodies a civilization, and had it been erased from the earth—as thankfully it has not been, as it now appears—the loss would have been irretrievable. The survival of the towers, the facade, the windows, the walls, the buttresses—all this is more than I hoped for in those first moments of grief. It was as though France herself had emerged from the smoke and gloom, a survivor—hurting, naked, and vulnerable, but still France.

Of course, Notre Dame herself has been through this before. When Paris was liberated in 1944, de Gaulle went to the cathedral for a Te Deum mass. The moment was captured on film by Henri Cartier-Bresson. On the night of the fire, almost 75 years later, President Macron also went to Notre Dame and announced that the damage would be repaired. In 1944 Notre Dame stood witness to the rebirth of France. In 2019 the French president stood witness to the survival of Notre Dame. One good turn deserves another.