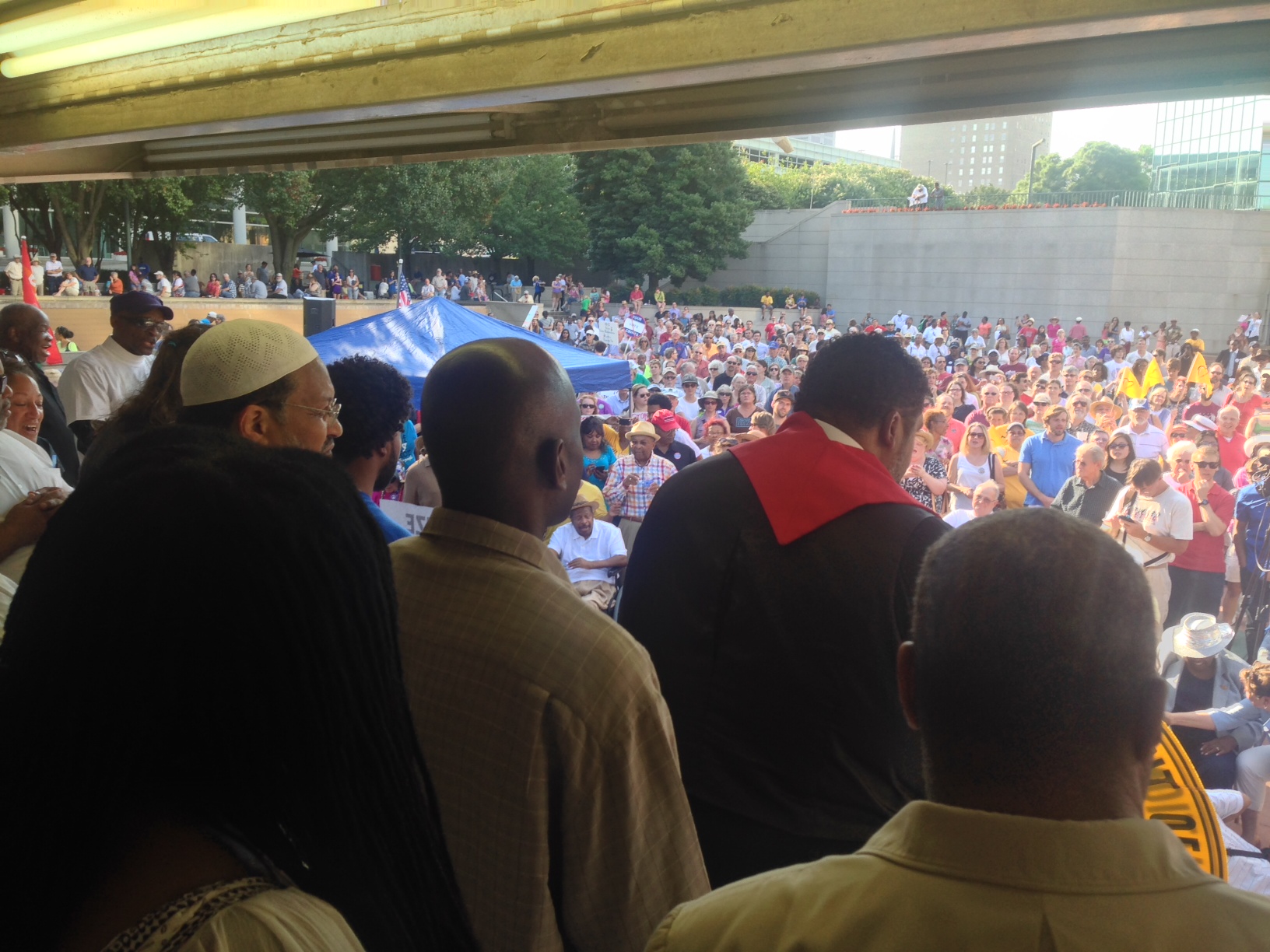 Rev. William Barber of the North Carolina NAACP speaks at a “Moral March to the Polls” rally in downtown Winston-Salem. Photo by Rob Stephens.

Winston-Salem—In March 1965, Carolyn Coleman, a young activist with the Alabama NAACP, marched to Montgomery in support of the Voting Rights Act.

After the passage of the VRA, Coleman spent a year registering voters in Mississippi, where her friend Wharlest Jackson, an NAACP leader in Natchez, was killed in early February 1967 by a car bomb after receiving a promotion at the local tire plant. A year later, Coleman was in Memphis organizing striking sanitation workers when Martin Luther King Jr. was assassinated.

Coleman devoted her life to expanding the franchise for the previously disenfranchised, serving as president of the North Carolina NAACP and Southern voter education director for the national NAACP. For the past twelve years, she’s been a county commissioner in Greensboro’s Guilford County.

Nearly fifty years after marching for voting rights in Alabama, Coleman testified in federal court today in Winston-Salem against North Carolina’s new voting restrictions, which have been described as the most onerous in the nation. The law mandates strict voter ID, cuts early voting by a week and eliminates same-day registration, among many other things. After the bill’s passage, “I was devastated,” Coleman testified. “I felt like I was living life over again. Everything that I worked for for the last fifty years was being lost.”

The federal government and civil rights groups, including the ACLU and the North Carolina NAACP, asked Judge Thomas Schroeder, a George W. Bush appointee for the Middle District of North Carolina, to enjoin key provisions of the law before the 2014 midterms under Section 2 of the VRA. They’re specifically targeting the cuts to early voting, the elimination of same-day registration during the early voting period and the prohibition on counting provisional ballots accidentally cast in the wrong precinct. (The new voter ID law, unlike the above provisions, doesn’t go into effect until 2016, although the state is doing a “test run” in 2014 where poll workers can ask for photo ID although voters don’t have to provide it.) The hearing is expected to last until later in the week, with a decision in the next month or so.

“These provisions have the purpose and result of denying and abridging the right to vote for African-Americans,” argued DOJ attorney Catherine Meza. The plaintiffs say the new restrictions disadvantage minority voters at a greater rate than white voters, in violation of Section 2’s ban on racial discrimination in voting.

Consider this data, via the DOJ’s brief:

And black voters were twice as likely to cast an out-of-precinct provisional ballot as white voters.

According to expert witness Charles Stewart, a political scientist at MIT, if the law had been in effect in 2012, “over 30,000 African-Americans who registered during the same-day registration period would have been unable to register during that period, almost 300,000 [black] early voters would have been shoehorned into more congested early voting and Election Day voting sites, and at least 2,000 African-American voters would have had their out-of-precinct votes left uncounted.”

North Carolina officials responded that the voting changes weren’t a big deal. The new law “puts North Carolina in the mainstream of other states with regard to election laws,” argued Butch Bowers, a South Carolina—based lawyer representing North Carolina Governor Pat McCrory. Bowers’s statement implicitly suggested that there was something extreme about adopting election procedures that lead to higher voter turnout.

Indeed, the new voting law repealed or curtailed nearly every reform passed by the state in the past two decades that encouraged more people to vote. In 1996, North Carolina ranked forty-third nationally in voter turnout. By 2012, thanks to measures like same-day registration and expanded early voting, North Carolina ranked eleventh.

In March 1965, when LBJ introduced the VRA, 46.8 percent of black North Carolinians were registered to vote compared to 96.8 percent of whites. But in 2008 and 2012, for the first time in state history, black turnout exceeded white turnout. The legislature “targeted the very reforms that expanded voting opportunities for African-Americans,” argued DOJ attorney Meza.

North Carolina is the perfect case study for what happened after the Supreme Court gutted the Voting Rights Act.

In April 2013, the North Carolina House passed a sixteen-page voter ID bill that required a government-issued photo ID to cast a ballot, but also accepted student IDs from state universities and public employee IDs. The bill languished in the North Carolina Senate until the Supreme Court overturned Section 4 of the VRA, freeing states like North Carolina from having to clear their voting changes with the federal government.

The law likely would’ve never been introduced by the legislature—let alone cleared by the federal government, since the burden of proof would have been on the state to show an absence of voting discrimination—if the Supreme Court had preserved Section 4.

Instead, under Section 2, the burden of proof is on the plaintiffs and the law is in effect unless Judge Schroeder grants a preliminary injunction. (There will be a full trial on the constitutionality of the law in July 2015.) We’re in uncharted territory. Section 2 has heretofore been used mainly to challenge discriminatory election systems or redistricting plans, not block recent vote denial efforts like cutting early voting or eliminating same-day registration.

After the hearing, eight hundred North Carolinians gathered in downtown Winston-Salem for a “Moral March to the Polls” event protesting the law. “I know it’s hot out here,” Barber told the crowd. “But it’s going to be hotter if you let them take our vote away.”