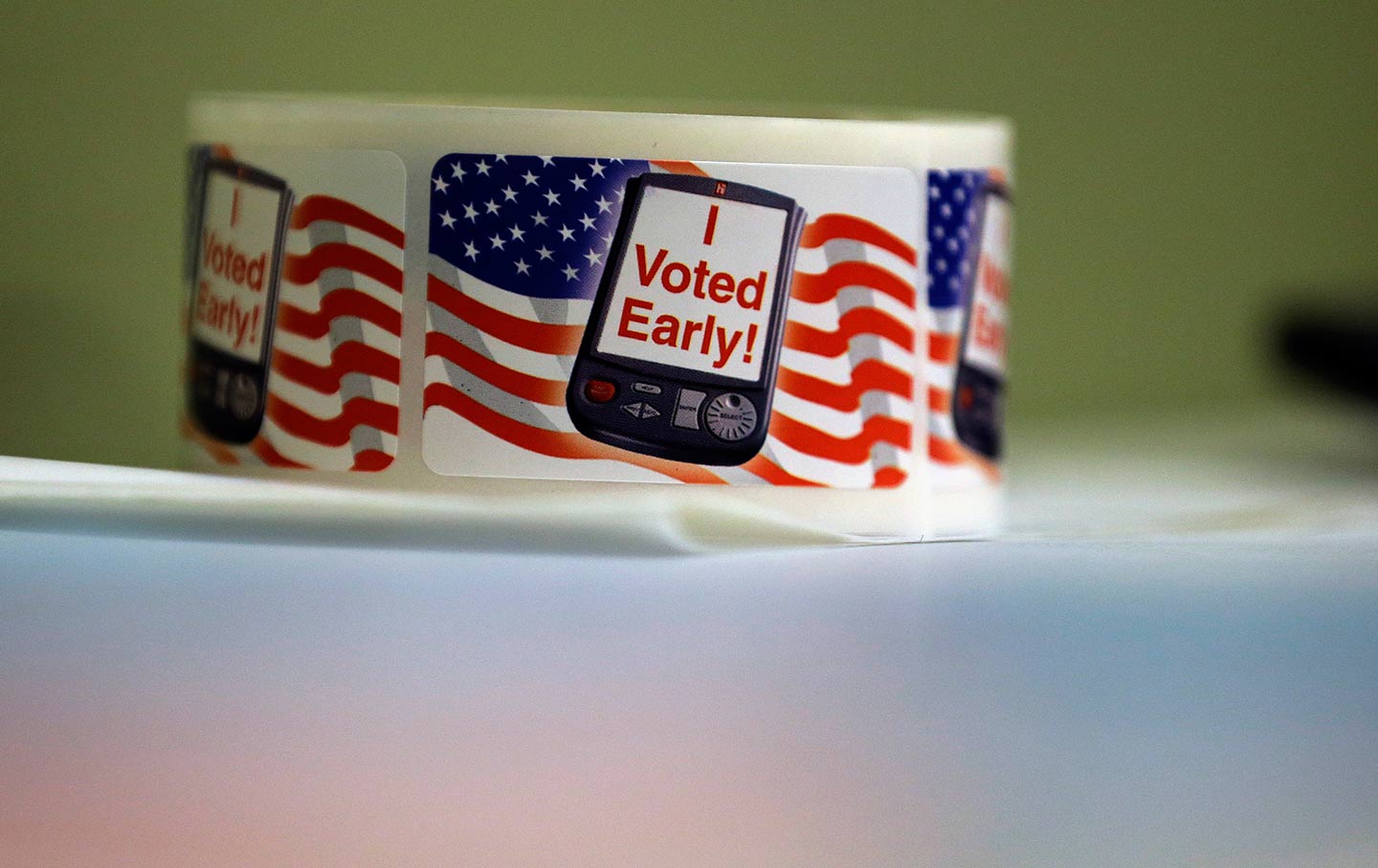 “I Voted Early” stickers are seen at an early voting polling site, in Austin, Texas, on February 26, 2014, a week before the first test of voter ID laws are introduced. (AP Photo / Eric Gay)

If Republican operatives had not cheated last year, it’s likely that Don McCready would be sitting in the US House today as the Democratic representative from North Carolina’s 9th congressional district. Their cheating was exposed and it forced a new election, which was good. But that new election, which was held yesterday, in the gerrymandered district saw massive spending by Republican-aligned groups, a presidential visit on the eve of the vote, and, ultimately, a narrow defeat for McCready in the last contest of the 2018 election cycle.

Republicans are spinning the result as a victory, and the top-line numbers confirm that. But beyond the spin is the reality that in a district where (with some allowances for redraws over the years) Republicans have been winning since the early 1960s and President Trump prevailed by 12 points in 2016, the Democrats just won 49 percent of the vote. If they can do that in 2020, they could pick up more than two dozen House seats that are more winnable than NC-9.

Yet simply moving on to the next election, as many politicians and pundits are prone to do, is not a sufficient response to what has played out over the past year in North Carolina. The cheating that forced the new election in that state’s 9th district—a lawless combination of “ballot harvesting” and “ballot tampering” that investigators say involved collecting absentee ballots, forging voter signatures, and filling out blank or incomplete ballots—took advantage of vulnerabilities in a chaotic and incoherent US election system.

Ballot harvesting is illegal in some states and regulated in others, and the fraudulent acts by operatives for North Carolina Republican candidate Mark Harris highlighted vulnerabilities in our election processes. The goal now is to protect against assaults on voting rights while maintaining easy access to the franchise. As Myrna Perez, the deputy director of the democracy program at the Brennan Center for Justice, says, “If you have an honest person who is trying to help voters, then who they are doesn’t matter as long as they return [the ballot].”

Ultimately, however, advocates for democracy should look beyond North Carolina’s revote and address the fact that, as Massachusetts Senator Elizabeth Warren puts it, “our government treats voting like it’s one of the least important things we do.”

“We have around 8,000 election jurisdictions all doing their own thing. They are overstretched, under-resourced, and their technology is often laughably out of date,” says Warren. Unsurprisingly, the senator has a plan for that: “We need a constitutional amendment to guarantee the right to vote. But the moral necessity of this amendment shouldn’t stop us from acting now. The federal government already has the power to regulate federal elections, secure our democracy, and put a stop to racist voter suppression.”

In order to assure that voting is easy and elections are secure, in June Warren released a sweeping reform proposal with three key components that got too little attention at the time:

Federal elections get state-of-the-art federal machines, federal ballots, and federal security. Right now some jurisdictions use dated machines that are easily hackable with no paper trail. Ballot design is all over the place. No more. The federal government will replace every voting machine in the country with state-of-the-art equipment and require adoption of a uniform federal ballot. And we will lock all federal voting technology systems behind a security firewall like it’s Fort Knox.

Federal standards for federal elections. We have 8,000 election jurisdictions running elections. Problems with resources, malfeasance, and errors are rampant. No more. We will have federal standards to ensure everyone can vote, including mandating automatic and same-day registration, early voting, and vote by mail. My plan will mean no more arbitrary voter purges. No more registration issues. And no more gerrymandering. We will also make Election Day a holiday to make it easier for people to get to the polls.

Enforce the law and expand access—through incentives where possible, and with federal authority where necessary. My plan will give states cutting-edge voting equipment and election security protocols, all paid for by the federal government, and states will be required to follow all federal standards for federal elections. States who also choose to meet these requirements in their state elections can work through federal-state partnership agreements to have those elections fully funded by the federal government, too—and we’ll give them a bonus for achieving high voter turnout rates. And here racist or corrupt politicians refuse to follow the law, the federal government will temporarily take over the administration of their federal elections to guarantee the fundamental right to vote.

That’s a bold proposal, but not too bold to enact. Because, after the mangled mess we’ve seen play out in North Carolina, Warren is right to argue that “Enough is enough. It is time to make high-quality voting in the greatest democracy in the world easy, convenient, and professional. It’s time to secure our elections from all threats, foreign and domestic. It’s time to address election security, administration problems, and voter suppression.”