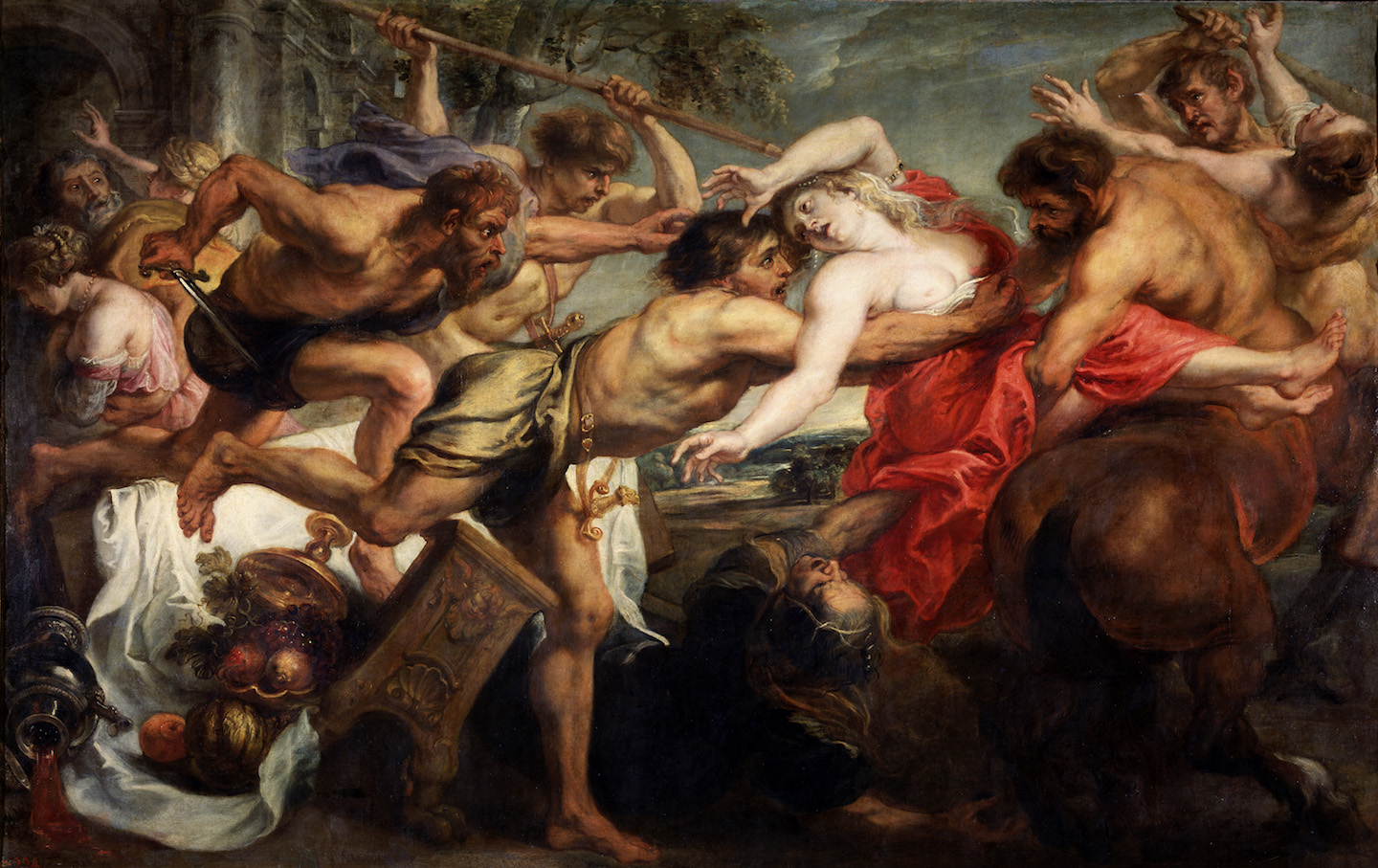 Metamorphoses, by the Roman poet Ovid, is a collection of myths, legends, and some history loosely bound by the subject of transformation, change, things revealing how they came to be or becoming other than they are. It’s also a litany of tales about rape or attempted rape. The god Apollo chases Daphne, trying to ensnare her; she turns into a laurel tree. The satyr Pan chases Syrinx; she becomes hollow water reeds. The river god Alpheus chases Arethusa; she becomes a stream, and he too transforms into water, mingling with her. Ovid, like the Greeks before him, drew a kind of structural relationship between rape and creation, between sexual violence and the foundations of the world. In this sense, these myths can posess a chilling realism, a clear-eyed communication of something we keep relearning to be true: Rape is at the corrupt foundations of society, just as it’s at the root of myths.

Perhaps because of the surprising parallels between myth and contemporary life, this first century poem has collided with the 21st century in the past few years. In 2015, four Columbia University students argued in the school newspaper that when Metamorphoses is assigned for a class, it should come with a trigger warning; hand-wringing followed. Last year, The New Yorker’s Katy Waldman reread Ovid against the backdrop of the Me Too movement, declaring it “the perfect time to reread the poet,” who, she wrote, “evokes the uncertain, shape-shifting mood of a country—a world—that is reimagining its sexual mores.” Jia Tolentino, also of The New Yorker, reread Ovid several months later against the backdrop of Brett Kavanaugh’s confirmation hearings and an art exhibition that tried to depict the aftermath of rape rather than the act itself. Both Waldman’s and Tolentino’s readings grappled with the entwined beauty and violence in Ovid. Tolentino’s piece ends wistfully: “For a moment, I imagined us all turning into trees, and then turning back.”

In a way, that kind of magical thinking is a starting point for Nina MacLaughlin’s recent book Wake, Siren: Ovid Resung. She began it as a writing exercise; she too was rereading Ovid and decided to rewrite the story of Callisto. In Ovid, Callisto is a nymph raped by Jove, punished by Diana, then turned into a bear by Juno. Her son unknowingly tries to hunt her, and Jove scoops her into the sky, turning her into a constellation, Ursa Major, as an act of pity. MacLaughlin’s revision tells the story from Callisto’s point of view, beginning with this assertion: “I am a bear. I live in the sky.” This is the declaration of a stable identity; the assertion of “I am” is the beginning of a story about shame, vengeance, violence, and change after change. It feels like a radical staking of a claim. In MacLaughlin’s version of this myth, Callisto is ambivalent about becoming a constellation, despite its framing by Ovid as a kindly act. But MacLaughlin asks: What if Callisto hadn’t wanted to be saved by the person who derailed her life? More pertinently, perhaps, she asks us to listen to what Callisto has to say, to hear her voice reimagined. This became the project of her book.

Wake, Siren is not a novel or a poem. Probably it is closest to a series of prose poems or short stories, though that’s not quite right, either. Each chapter is named after a woman from Metamorphoses. Many are straightforward confessionals, but the forms vary: One features a song, one is written like a scene from a play, one is told as an academic lecture, one includes a series of e-mails. Some are told by characters peripheral to the story, though most are narrated by the woman the story is ostensibly about. They have in common distinct, clear voices. Voices are central to MacLaughlin’s project, which is first and foremost about giving them to the women of Metamorphoses. (It is hard to read her testament to “voice” without thinking of the women who have spoken out in the last few years against sexual violence—and also of those who have sought to silence voices like theirs for centuries.)

Some of the stories stay functionally the same, or at least they’re told in a way we might anticipate. Daphne’s chapter hews closely to Ovid’s text, even borrowing a line from Allan Mandelbaum’s translation: “My shaft is sure in flight.” The changes to the story are subtle but fundamental. In Ovid, Daphne, after she becomes a laurel tree, shakes her leaves “as if her head had meant to show consent”—a sad ending to a story in which she’s become functionally mute, her movements suggestive of what Apollo might like to hear. In MacLaughlin’s story, Daphne feels victorious: She shakes her leaves because as a tree, she has won, not lost, by thwarting Apollo. Some ambiguity creeps into MacLaughlin’s last lines, in an echo of Ovid: “I shook and shook. As if I were nodding. As if I were telling him yes.” But she is no longer mute or passive.

The meaning of other stories shifts more dramatically. The story of Orpheus and Eurydice is no longer a tragic romance but a story about an abusive relationship. The twist works surprisingly well, turning the myth on its head. It allows us to look more closely at Orpheus’s pursuit of his wife into the underworld, at a love pushed too far. The story of Arachne—a weaver transformed by Minerva into a spider for her hubris—becomes in Wake, Siren less about pride and more about poverty and power. Throughout, the unmitigated power of the gods to take and take and take is no longer accepted as totally just. Power, godly or otherwise, is scrutinized here—and scrutinized by those characters who don’t have it.

The settings of some (though not all) of these stories have been made explicitly contemporary. Signs of the 21st century creep in, along with 21st century language. (“This is when I knew I was fucked,” Daphne says). Language like this works most of the time because it feels closely considered, often in conversation with the poem, clever in its own right. But other contemporary elements—the presence of Life Savers, yoga, music festivals, skateboarding—can feel artificial and at times jarring. The point, perhaps, is that the myths transcend time, that they could just as easily be set today. But we know that already; that’s why we’re reading in the first place. The scattershot references feel almost like an argument against timelessness, a sudden jolt out of the mythic world that’s being built.

Wake, Siren is by no means the first rewriting of Ovid. In 2018, writer Will Boast took Daphne’s myth as a loose starting point for a novel, and writers since (and before) Dante have been drawing from the poem. Ovid himself was rewriting stories that already existed. But Wake, Siren manages to feel uniquely close to Metamorphoses while recasting it totally—a real feat of writing. It’s best read alongside the associated parts of poem, a dipping-in-and-out of two registers of language and two perspectives. It’s not essential to read them side by side—Wake, Siren can stand on its own—but it helps to know the contours of the story MacLaughlin is remaking.

Not all of the stories in Metamorphoses or in Wake, Siren are about rape, though almost all of MacLaughlin’s deal with gender in some way. There are women being wicked and bloodthirsty and cruel. There are women experiencing intense desire. There are Salmacis and Hermaphroditus, whose story reverses the conventional gender dynamic of rape and then upends gender norms altogether when the two merge into a single, multi-gendered being. Most of the best retellings, though, are rewritings of sexual crimes. MacLaughlin’s words feel additive, creative, something good pulled from difficult source material. Her stories about rape are complicated and multidimensional, avoiding the flatness that can come with stories we think we already know. It’s here that her project of giving voice works best; when it’s done well, these voices add texture and expand the stories. Wake, Siren is a powerful artistic answer to a question of our time: What are we supposed to do with all these myths that take rape as their starting point?

Thetis, the mother of Achilles, doesn’t get many lines in Ovid, but in Wake, Siren her chapter is extraordinary. Peleus attempts to rape her, and Thetis shifts her shape. “I began my bestiary,” she declares. What follows is a litany of changes, a poem of sorts, that leads us through the animal kingdom, then a taxonomy of inhuman shapes, and eventually into a puddle. Transformation here is a kind of resistance, a struggle that ultimately leads to dissolution. But dissolution becomes a new kind of power. This chapter is a slow-motion story of sexual violence that is about agency, escape, constraint, and the instability of the self. It is a beautiful and awful story, made more beautiful and awful by MacLaughlin in her retelling.