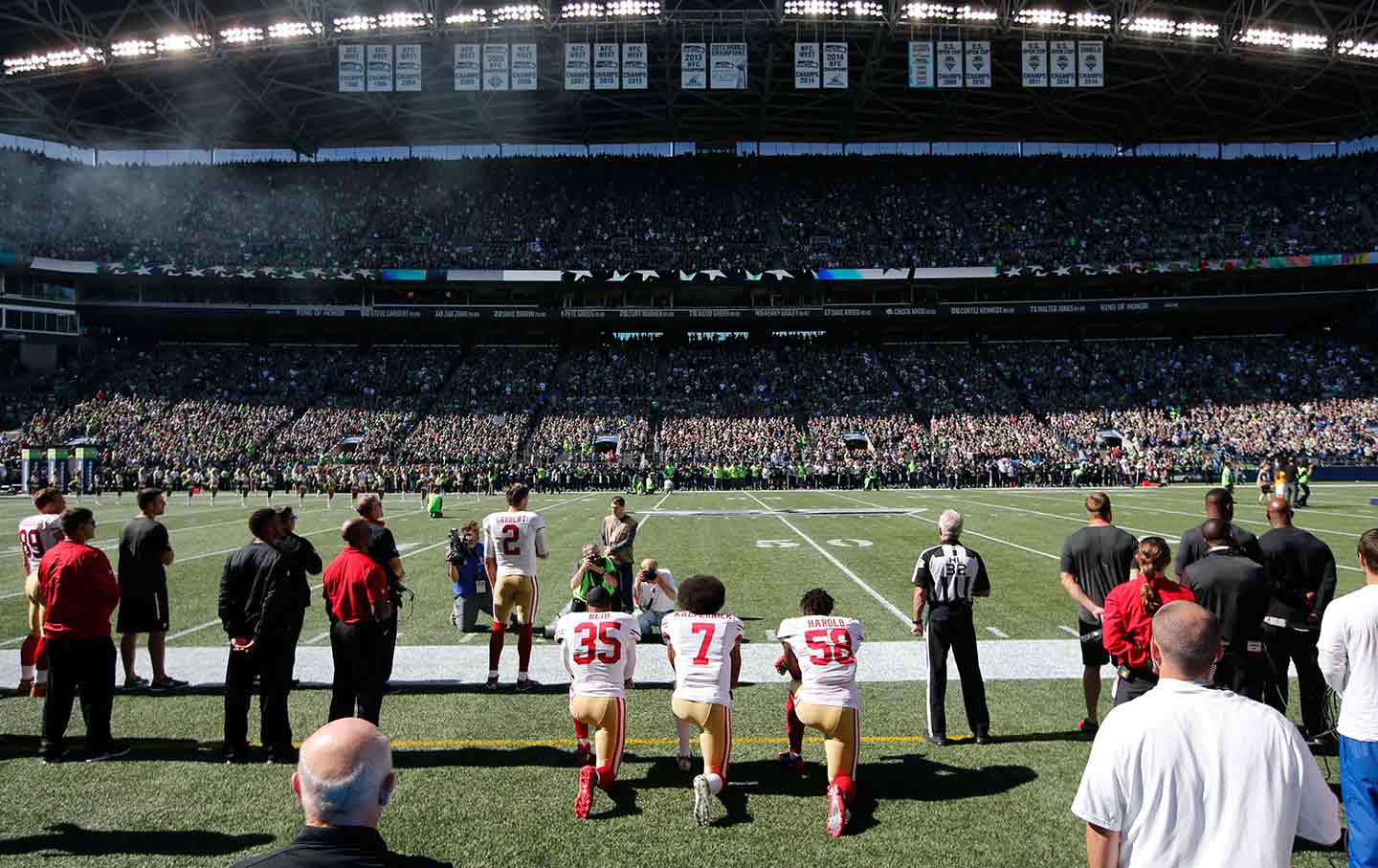 On Thursday night, at the first preseason NFL games, players continued to protest racial inequity and police violence by kneeling or raising a fist during the National Anthem.

After two years of the players’ patiently explaining that these are not “protests against the anthem,” or “protests against the troops,” or protests against apple pie, many in the mainstream media are being willfully obtuse in their headlines and reporting—surely to the delight of people who want the players to “shut up and play.” This isn’t just happening in the confines of Fox News. Even NPR sent a tweet with the headline, “The national anthem protests live on in the NFL.”

The greatest cheerleader of this willful ignorance is, of course, Donald Trump who railed against the players Monday morning in yet another effort to distract, demonize, and deflect from the numerous scandals engulfing his administration. People can find the tweets for themselves. It’s his usual shtick, although with the new addition that the players don’t even know what they are protesting against. He hates these players not only because it’s red meat for his base. He hates them because they are using their platform to force a dialogue about racism, criminal justice, and police violence.

It is remarkable that, despite this social pressure, a core of players is still being stubbornly insistent with their actions and painfully patient explanations.

Kenny Stills and Albert Wilson of the Miami Dolphins took a knee before their preseason game on Thursday and teammate Robert Quinn raised his fist. Malcolm Jenkins of the Eagles continued his practice of raising his fist, while teammate Chris Long put his arm on his shoulder. Other players stayed in the locker room while the anthem played. Some wore T-shirts and tweeted messages about the criminal-justice system or the phrase of protest against media misinformation, “You’re Still Not Listening.” They are making it plain that this will continue be a feature of the most popular sport in the country.

As Kenny Stills said after the game:

If you continue to misinterpret what we’re doing, reach out to me. Look at my website. Look at my twitter. Look at all my social media platforms. And I think you’ll get a better idea of why we are doing what we are doing.

Stills was asked what it would take for him to stop kneeling. He said, “What would it take? It would take a lot. But I think a good first step for us as a league would be acknowledging what they’re doing to Colin Kaepernick and Eric Reid. You can’t say as a league that you support the players and the protest and then blackball the players that initially started the protest.”

This shouldn’t be complicated. As Aaron Rodgers, the all-world quarterback for the Green Bay Packers who has never knelt or raised a fist, said matter-of-factly earlier this week, “It was never about the anthem, it was never about the troops, it was about social equality and racial injustice.”

And yet the misrepresentations continue. NFL legend Jim Brown, who shocked many when he supported Donald Trump in 2016, said this week, “I’ll never kneel and I will always respect the flag.” This imposes the false binary, against the will of the messengers, that the goal is disrespecting the flag and not raising life-and-death concerns of the black community.

We are past the point where these kinds of utterances can be judged as a syntactical error or mere ignorance. It is done to dodge the very conversation that the players are attempting to provoke: racial inequity and police violence. People should instead listen to Jim Brown’s friend of 60 years, NBA legend Bill Russell, who tweeted out a 2017 picture of himself kneeling before last night’s games and wrote, “The first NFL games kick off today, I want to show my continued support for the players & their decision to stand against #socialinjustice. I thought about taking a new photo but was afraid I wouldn’t be able to get up this time.”

Or in the words of 1968 Olympian John Carlos, who said five decades ago, “tell the white people of America and all over the world that if they don’t seem to care for the things black people do, they should not go to see black people perform.”