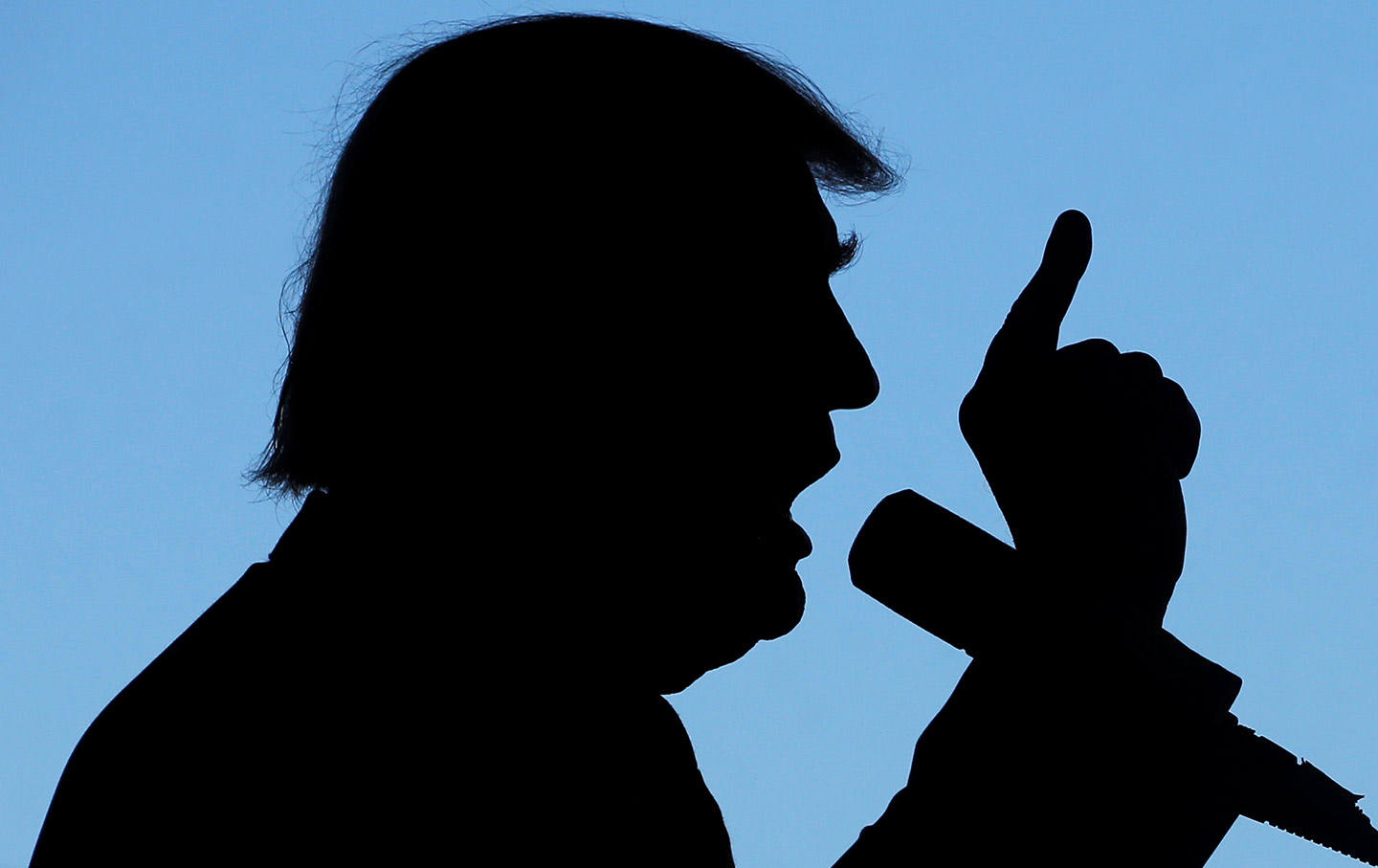 When Breitbart asked Donald Trump about his recent executive order to “protect” speech on college campuses, the president gave a wandering reply that included something of a threat: “I can tell you, I have the support of the police, the support of the military, the support of the Bikers for Trump—I have the tough people, but they don’t play it tough until they go to a certain point, and then it would be very bad, very bad.”

If Trump’s statement sounded inconsistent with his mandate of free speech, the backdrop against which he spoke was even more remarkable. The news that week was filled with reports that Venezuelan President Nicolás Maduro has been deploying armed motorcycle gangs as extrajudicial enforcers in his country. (By the same token, Vladimir Putin’s fondness for the paramilitary bikers known as the Night Wolves is notorious.) Trump’s statement also came just days before a sitting member of Congress, Representative Steve King (R-IA), hypothesized about “another civil war” in the United States: “One side has about 8 trillion bullets, while the other side doesn’t know which bathroom to use…. Wonder who would win.” Again, an alarming image of our polity divided between armed and unarmed, right and left, the tough and those who didn’t see it coming.

Most glaringly, Trump bragged about his de facto backup crew just days before a heavily armed gunman killed 50 Muslims in New Zealand and cited the US president as a “symbol of renewed white identity” (albeit just “one time,” as Trump aide Kellyanne Conway noted helpfully). Obviously, a politician’s words don’t necessarily make him liable for the acts of all his admirers. But the issue is not about proving a direct causation between Trump’s speech and the violence it inspires. It is just as worrying that there is a US president who so relentlessly dehumanizes, infantilizes, hypersexualizes, pathologizes, and criminalizes. Trump is not Hitler, but the rhetoric he employs isn’t that far off. Hitler wrote that Jews were a “poison” to national bodies, causing “a ferment of decomposition” among peoples and races that renders them, in the broader sense, “a dissolver of human culture.” Trump and many of his appointees have reinvigorated such sentiments with a caustic new life, applying them to everyone from Mexicans to Muslims to Democrats to dead war heroes: low-IQ, lowlife, parasitic, worst-of-the-worst, scummy, wussy, disgraceful, ugly, fat-faced, coddled, vicious, animal, raping, drug-dealing, a bad-very-bad subhuman invasion.

The philosopher Lynne Tirrell writes about toxic speech in the contexts of Nazi demagoguery and the Rwandan genocide. She casts it as a public-health problem in which hateful memes spread and can be tracked according to predictive patterns that “divide groups, make people think the group division is natural,” and encourage the use of “derogatory terms to refer to the group you plan to eliminate, especially terms that have action-engendering power.” Words that are “action-engendering”—that move people to act—are sometimes imperatives or have institutional heft. They are the bridge from purely linguistic descriptions to the nonlinguistic behaviors that such terms license or permit.

As Tirrell observes about the dehumanizing images deployed in the Rwandan genocide: Boys “learn how to kill a snake with a machete, and so when Tutsi were called snakes, the Hutu militia knew exactly how to attack.” She notes that the bipolar division into “us and them” is an especially efficient action-engendering device in the creation of bunkered populations. There is a persistent bipolarity concerning who is or is not entitled to share in the president’s envisioned American destiny: Republicans versus Democrats, right versus left, real versus fake, good versus bad, “our people” versus the rest. For all his professed devotion to the notion of free speech, Trump has consistently expressed the wish to shut up and put down those whom he deems not among “my people.” At a Michigan rally, he urged security guards to remove a protester with these words: “Get him out. Try not to hurt him. If you do, I’ll defend you in court…. Are Trump rallies the most fun? We’re having a good time.” When a protester heckled him at a gathering in Las Vegas, Trump declared: “I’d like to punch him in the face.” The president even offered to pay supporter John McGraw’s legal fees after McGraw sucker-punched a black heckler and then told an Inside Edition crew that “we might have to kill him” if he saw the protester again. McGraw, Trump purred, “obviously loves the country.”

Hitler described the bonding effects of mass meetings as essential for “esprit de corps.” He wrote in Mein Kampf: “When from his little workshop or big factory, in which he feels very small, [the ordinary man] steps for the first time into a mass meeting and has thousands and thousands of people of the same opinion around him…when the visible success and agreement of thousands confirm to him the rightness of the new doctrine and for the first time arouse doubt in the truth of his previous conviction—then he himself has succumbed to the magic influence of what we designate as ‘mass suggestion.’”

The Washington Post recently published statistics showing that counties that hosted Trump rallies saw a 226 percent increase in hate crimes over those that hadn’t. “It is hard to discount a ‘Trump effect’ when a considerable number of these reported hate crimes reference Trump,” the story noted.

We are living through a time of emergency—just not the one to which Trump would assign meaning. The emergency I fear is precisely the great collective power among the armed and angry warriors to whom the president throws the red meat of his words. His words are more than insult or defamation; they carry the weight of constant threat, for, as commander in chief, his speech may be construed as imperative. Which of “us” will follow that command?