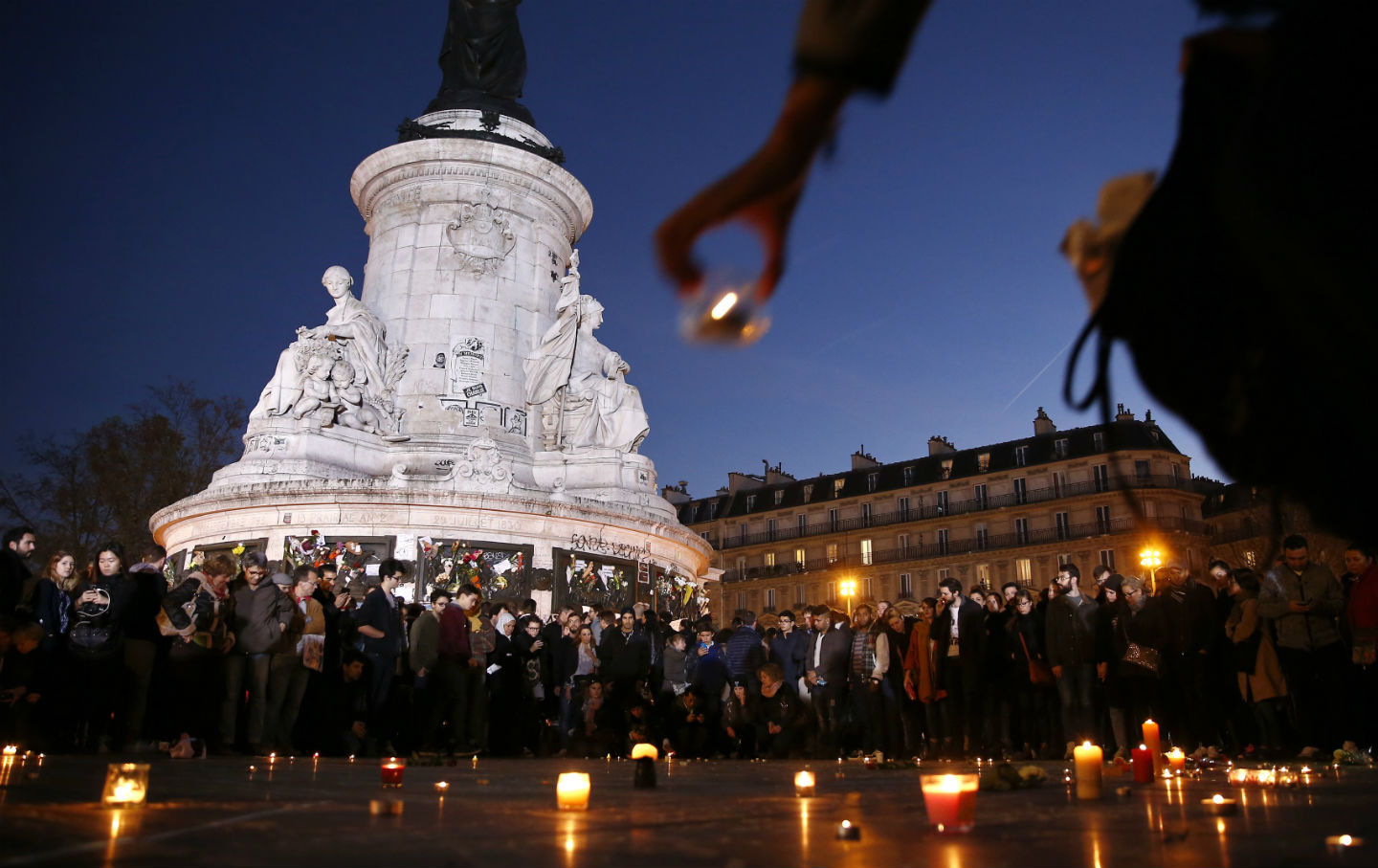 A candle is placed during a vigil in Place de la République following the series of deadly attacks in Paris, November 15, 2015. (Reuters / Benoit Tessier)

As news of the Paris massacres torturously revealed itself on Friday, drip by drip, the community of French professional athletes in the United States took to Twitter to voice their solidarity, concern, and heartbreak. Yet a digressive exception to the straightforward messages of loss was seen in the message sent by Utah Jazz center Rudy Gobert. Nicknamed “the Stifle Tower,” Gobert has emerged as a game-changing force for the Utah Jazz: a late-first-round project who is turning around the fortunes of the long-middling franchise.

As Paris burned, Gobert tweeted the following: “Ne vous laissez pas manipuler.” Say those five words out loud. Like most phrases in French, it assumes a natural rhythmic poetry that requires strenuous exertion when attempting the same in the English language. But there is nothing whimsical in its translation. The phrase means, “Do not allow yourself to be manipulated.”

After the Paris Attacks, a Call for Justice—Not Vengeance

These five words have an idiomatic translation in a much-used hashtag of the Black Lives Matter movement: “#StayWoke.”

To “stay woke” in the aftermath of the Paris attacks is an act of conscious resistance against an ugly tide. Before the bodies had even been counted, France had shut its borders for the first time since 1944. Xenophobic right-winger Marine Le Pen reacted to the attacks with calls to shut down mosques and expel immigrants. If Le Pen is France’s next leader, no one will celebrate quite like ISIS.

As hostages were still messaging for help from inside the Bataclan, pundits with frighteningly vast followings were using dead bodies like quills dipped in blood, as they brayed for total war. They demanded an attack on Muslims: Shia, Sunni, Palestinians, Iranian… just an undifferentiated mass of innocent people whom Senator Ted Cruz has defined as future casualties: casualties to be killed by someone else’s children.

And then there are the US commentators—with thuggish verbiage both unconscionable and illogical—using the dead to bash college students for actually trying to fight for a world with less hatreds than the one they inherited. Judith Miller is a Lilliputian golem, whose reporting lubricated the lies of Dick Cheney and helped birth the Iraq War. For reasons that must reside in her own shameless ego, she felt the right to attack the young, even though Miller has earned nothing through her work but the right to remain silent.

Above all else, we have been buried in a social-media avalanche of the kinds of martial sentiments that once took William Randolph Hearst days to compose and distribute. Blame brown immigrants. Drop bombs from the skies. Take zero accountability for the so called “collateral damage.” And, most critically, set domestic concerns aside. How could they matter when there are wars to fight and your children could be the next “soft targets”?

The world is still warming, the police are still shooting, and a massacre in Paris does not stanch these wounds.

My belief, drawn from speaking to those trying to push for positive change one agonizing inch at a time, is that what worked for Hearst in 1903 and what worked for Judith Miller in 2003 won’t work in 2015. It won’t work, because you can’t argue that all that matters is a “war on terror” when the families of Trayvon Martin, Tamir Rice, and Sandra Bland probably have a very different definition of terrorism. You can’t tell students at Missouri and Howard that now is the time to really be afraid, when they already have to live with people threatening their lives for going to class.

It won’t work, because you cannot expect people to now ignore climate change or police violence or homegrown racism or the attacks on Planned Parenthood because of the “urgency” created by the Paris killings—because for people with their eyes open, we are encircled by competing urgencies. The world is still warming, the police are still shooting, and a massacre in Paris does not stanch these wounds. If anything, the killings gouge them further.

Those telling us what to think have a message that rings as falsely as a Ben Carson anecdote.

You can’t tell us to see Muslims as a collective enemy when they are our friends, our neighbors, and when we feel their fear.

You can’t tell an 18-year-old, who was 4 when the attacks of 9/11 took place and has known nothing but a permanent state of mismanaged war, that you have the answers for what ails us, when your remedies feel like more poison than a cure. Through her eyes, she was born into a broken world and it would be the heights of lunacy to think you could do anything except break it into smaller and smaller pieces.

“Stay woke”? There is no going the fuck to sleep, if we ever hope to get out of bed. “Ne vous laissez pas manipuler.” The future depends on it.