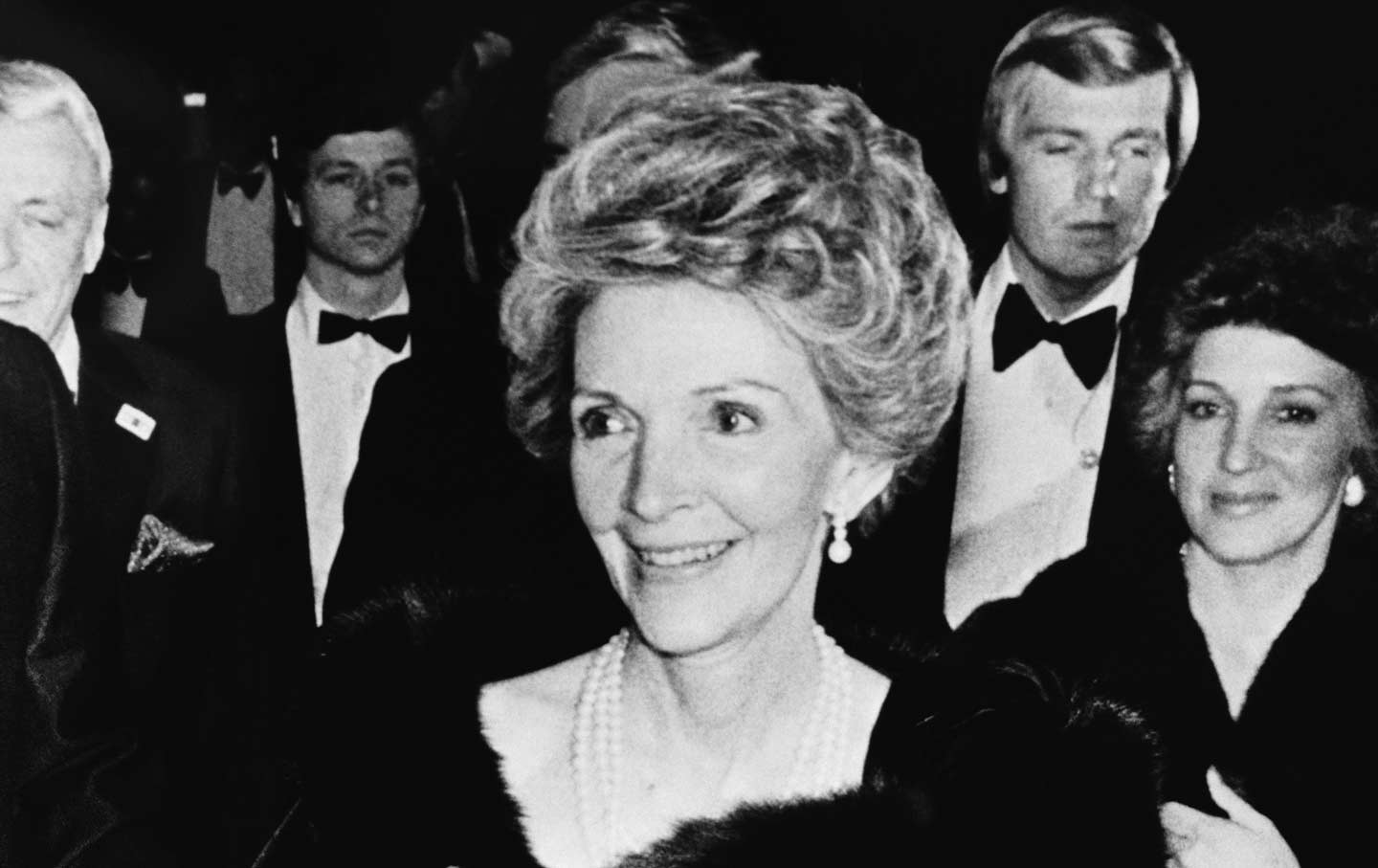 EDITOR’S NOTE: Jon Wiener’s original story was "The Other Nancy Davis: Not Necessarily the First Lady." The Nation, October 3, 1987.

Nancy Reagan, who died March 6, often explained that she and the future president met cute. She had been threatened with blacklisting in the early ’50s—by mistake, she said, after having been confused with another actress who had the same name—Nancy Davis. The other Nancy Davis, Nancy and Ronald Reagan said, really was a Communist. Reagan, then president of the Screen Actors Guild, helped the first Nancy prove she wasn’t the Communist Nancy Davis, and she was able to work again. Along the way, they fell in love, and the rest is history.

In 1987, I found the other Nancy Davis working at a snack bar in Ventura, California, and interviewed her for The Nation. When I asked about the first lady, she said, “She’s been lying about me for years…. I never was a Communist. I told Reagan back in the fifties that if she didn’t stop saying I was a Communist, I’d sue her.”

Ronald Reagan wrote in his autobiography, Where’s the Rest of Me?, that because his wife-to-be was assumed to be the other Nancy Davis, “her name kept showing up on rosters of Communist front organizations, affixed to petitions of the same coloration, and her mail frequently included notices of meetings she had no desire to attend, and accounts of these meetings as covered by the Daily Worker.” Nancy Davis Reagan was asked by Columbia Pictures to explain why her maiden name appeared on the amicus curaie brief supporting the Hollywood Ten. Ron, who was SAG president at the time, wrote an indignant letter to B.B. Kahane, Columbia vice president in charge of security, explaining that there were two Nancys, and that the other one was the Communist.

Nancy herself demanded an apology, and got one from Kahane: “of course,” he wrote, “we could have taken it for granted that the wife of Ronald Reagan could not possibly be of questionable loyalty and could have disregarded that report.” You could call that “innocence by association.”

Kahane continued: “But as the citation was merely the signing of the Amicus Curiae brief and many persons signed this brief who we have been convinced are not now and never were Communists or sympathizers, we informed you of the citation believing that a satisfactory explanation would be forthcoming.”

That was a lot nicer than the letter Kahane had written to Rita Hayworth’s attorney Martin Gang the previous year, when Gang sought to clear her name from the blacklist. Victor Navasky tells that story in Naming Names: Hayworth, unlike Nancy Reagan, was asked to submit a sworn statement that “should set forth the fact (if, as I assume, it is a fact) that she is not now and never has been a member of the Communist Party. It should also contain a positive, forthright affirmation of her loyalty to the United States and I hope, a strong condemnation of Communistic subversive groups and ideologies.”

Kahane’s letter to Nancy contained one striking admission: The studio recognized that not all supporters of the Hollywood Ten were Communists or “sympathizers.” This included the Nancy Davis who had signed the brief.  Nevertheless, Nancy Reagan repeatedly described the other Nancy Davis as a Communist.

“It’s not true,” the other Nancy Davis told me. (She had skated in several Sonja Henie movies.) “I didn’t have anything to do with the Communists. I never signed anything about the Hollywood Ten. After I threatened to sue her, she stopped saying those things for a while. Then in the eighties it’s begun again.”

“It is true that we were confused with each other,” the other Nancy said. “I’d get her paychecks, and she’d get mine. Hers were bigger. We’d exchange them. And once I got an invitation to a fancy event at the Beverly Hills hotel; it said ‘bring Mr. Reagan.’ I brought Tony Reagan; he was a casting director at Paramount.”

The other Nancy recalled that she was summoned to a meeting with SAG president Reagan in 1953 to discuss the two Nancys problem. “He told me I had to change my name,” she recalled. “He suggested I use ‘Nancy Lee Davis.’ I told him I wouldn’t; I was the first Nancy Davis in the Guild, so under the rules she had to change her name. But he was the boss, and he insisted. I realized he could cause me a lot of trouble. So I changed my name.”

Because Nancy Davis Reagan was cleared to work in 1953, she was able to appear in a supporting role in Donovan’s Brain. In the film, an evil tycoon dies, and his brain is kept alive by scientist Lew Ayres; the brain takes him over and makes him do terrible things. (The film was later brought to life with Dick Cheney as the dead tycoon and George W. Bush in the Lew Ayres role.)

What about Nancy and Ronald Reagan’s story that they met and fell in love while clearing Nancy of charges that she was associated with Communists? It couldn’t have happened the way they said it did, according to Anne Edwards, author of the book Early Reagan, which was based in part on the archives of the Screen Actors Guild. That’s because Nancy Davis Reagan was not linked to the Hollywood Ten by Columbia Pictures until 1953, when she was already married to the future president. In fact, they had met in 1949, when, according to Edwards, Nancy told producer Dore Schary’s wife, Miriam, that she wanted to meet Reagan, and the Scharys invited both to a small dinner party. The Scharys’ daughter, author Jill Robinson, recalled the evening: Reagan described the evils of communism, and Nancy “kept smiling at him in agreement.” Soon, brother Neil Reagan told a friend, “It looks as if this one has her hooks in him.”

Thus there were two Nancy Davises in Hollywood in the early ’50s. One called the other a Communist. That was not true. The first one ended up in the White House, and the other one ended up in Ventura, California, flipping burgers in a snack bar. That’s life in America.