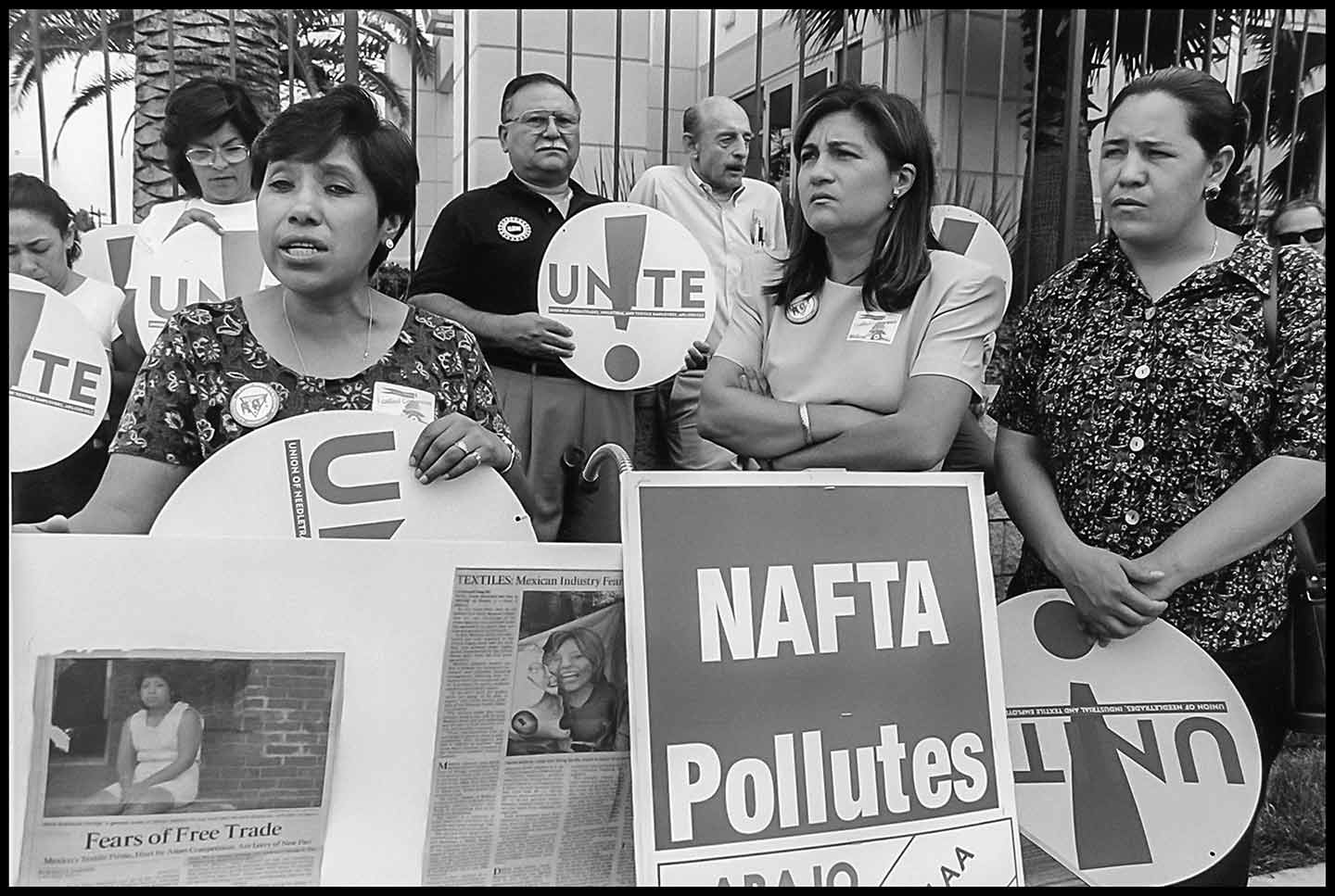 Los Angeles garment worker leader Christina Vasquez and members of her union UNITE denounce NAFTA for having caused the closure of the factory where they worked, 1994. (David Bacon)

On the campaign trail, Donald Trump pledged to get rid of NAFTA, and once in office he killed Barack Obama’s Trans-Pacific Partnership. Neither of those trade policies was worth mourning. But now, he has produced a “renegotiated” NAFTA—the United States–Mexico–Canada Agreement or USMCA—whose purpose is the same as the original: to eliminate “rules that interfere with cross-border commercial activity” and “to craft laws that facilitate these activities,” according to the Canadian union, UNIFOR. In other words, the purpose of the new agreement is to provide profit-making opportunities for large corporations—the same purpose that led to the disastrous impact of the old one.

Pressuring Trump’s trade negotiators will not produce a trade agreement that will help workers on either side of the border, as a quarter-century of experience with NAFTA demonstrates. That trade agreement unleashed economic changes in Mexico that increased poverty and displaced people on a massive scale. At the same time, it was useless in protecting union rights, especially in the United States. I’ve spent the last two and a half decades documenting the devastation that NAFTA has wrought for Mexico’s workers, and the vigorous resistance that US and Mexican workers have put up against its ravages.

At the time the original NAFTA was implemented in 1994, supporters claimed the deal would raise incomes in Mexico and would slow migration from Mexico to the United States. By 2005, however, the World Bank found that extreme rural poverty jumped from 35 percent to 55 percent within four years after NAFTA took effect. By 2010, 53 million Mexicans were living in poverty. In the 20 years after NAFTA went into effect, the buying power of Mexican wages dropped—the minimum wage’s buying power plummeted by a staggering 24 percent.

In NAFTA’s first year, 1 million Mexicans lost their jobs. According to Jeff Faux, founding director of the Economic Policy Institute, “The peso crash of December 1994 was directly connected to NAFTA.” Yellow corn grown by Mexican farmers then had to compete with corn from huge US producers, subsidized by the US farm bill. Corn imports into Mexico rose from 2 million to over 10 million tons, driving 2.5 million Mexican farmers and farm workers off their land. 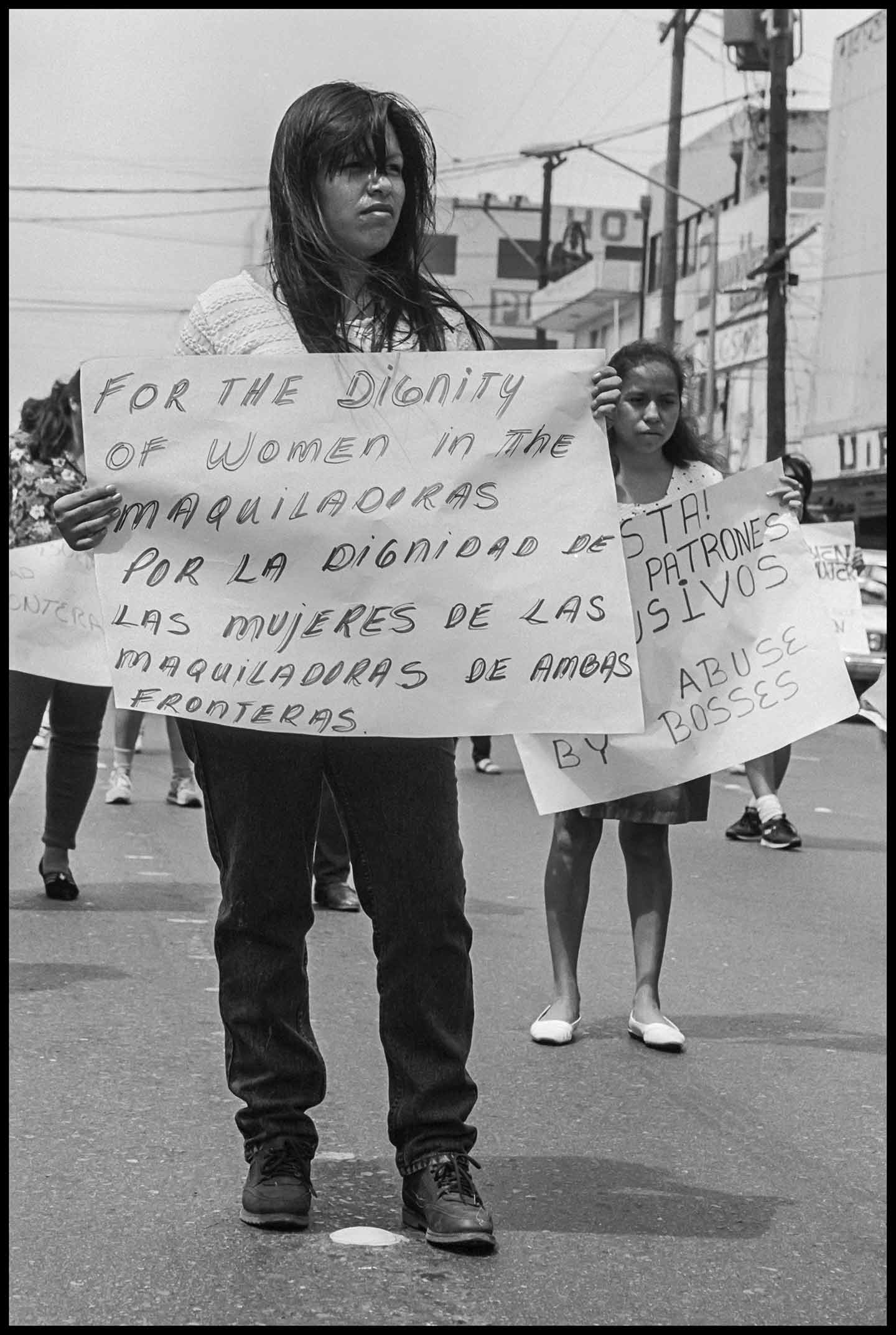 “Here, if you have no money, the government won't enforce the law. We really have very good laws in Mexico, but a very bad government.” Veronica Vasquez spoke these words in the middle of a dusty street in Tijuana, in the workers’ march on May Day. (David Bacon)

In 1990, 4.5 million Mexican migrants had come to the United States. In 2008 that number peaked at 12.67 million. About 9 percent of all Mexicans now live in El Norte. This displacement and forced migration was a direct consequence of the economic damage the treaty dealt to Mexico’s economy. Timothy Wise, senior research fellow at Tufts University, says, “The real assault was NAFTA, along with the neoliberal economic policies adopted by the Mexican government, of which NAFTA was an integral part.”

Besides the economic immiseration of two generations of Mexican workers, the original NAFTA also failed at one of its other purported goals, to improve working conditions for workers across North America. Both the old and the new agreements require the United States, Canada, and Mexico to enforce their own labor laws. But for over a quarter-century NAFTA abjectly failed to do this. Mexico’s laws guarantee workers the right to form independent unions, but throughout NAFTA’s reign workers’ attempts to organize were met with firings, beatings, and broken strikes. NAFTA’s side agreement on labor failed to reinstate even a single fired worker or force the signing of a single union contract.

After two decades of pressure from progressive Mexican unions, Mexico has finally passed a law strengthening the rights of Mexican workers in their unions and workplaces. Many unions here in the United States supported the long effort to win those reforms. Liberal Democrats and the AFL-CIO now call on Mexico’s new government to implement this new labor law reform as a condition for supporting the new NAFTA. 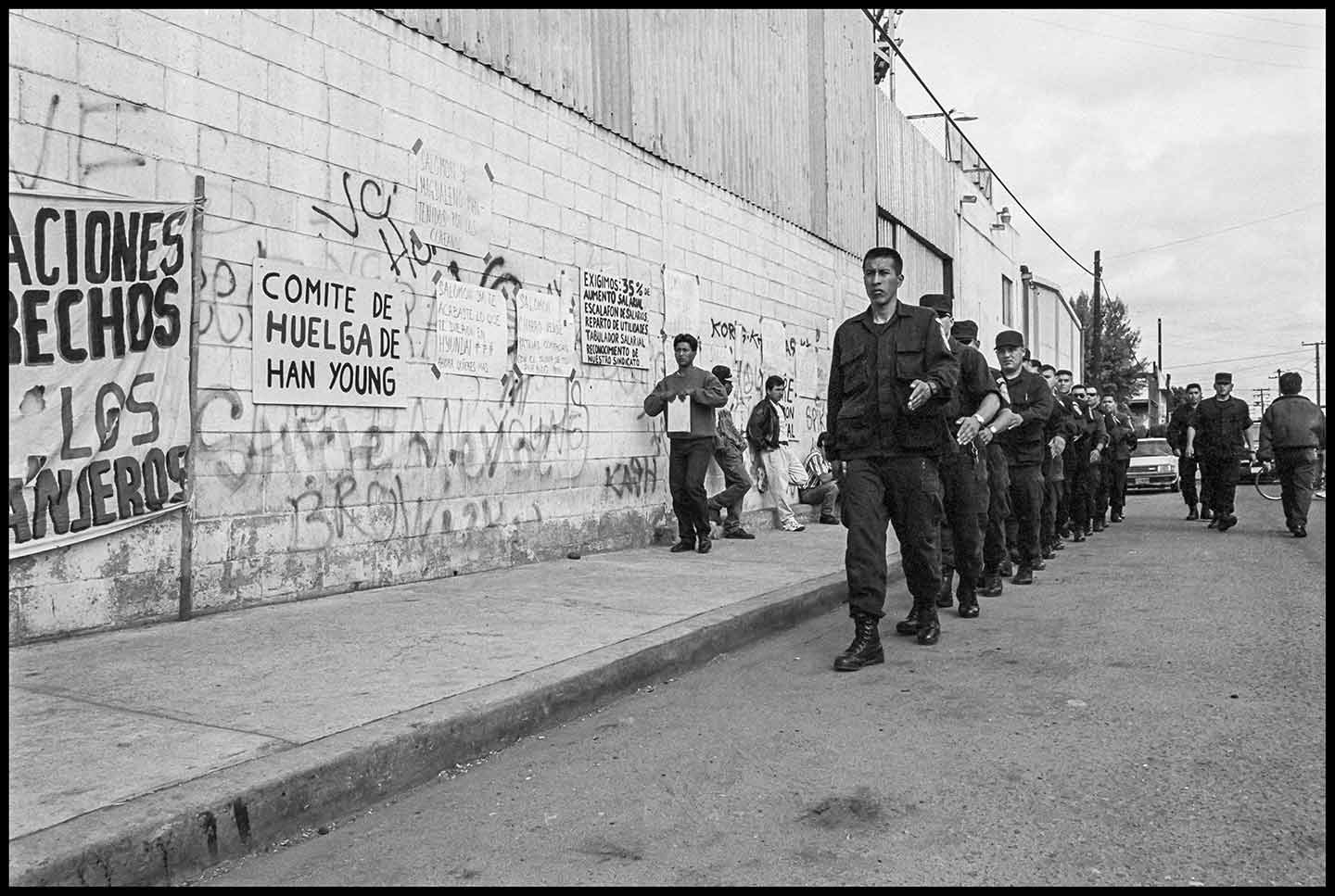 Members of Tijuana’s SWAT team, the Special Forces, march beside the Han Young factory, as they prepare to illegally reopen the plant and bring in strikebreakers in 1998. Workers in the plant had organized an independent union and gone on strike. (David Bacon)

Strong unions and high wages benefit workers in both countries. The USMCA supposedly will require Mexico to enforce the new reforms more rigorously. Mexican workers will indeed benefit if they are enforced, but the track record of the old NAFTA is clear. Even if the USMCA requires Mexico to obey its own labor laws, freeing US corporations to invest and operate in Mexico will have the same disastrous consequences the old agreement produced. And unmentioned in the current debate is the failure of NAFTA to require enforcement of US labor laws.

In the United States, the National Labor Relations Board has failed to aggressively enforce the National Labor Relations Act or significantly curb a whole industry of illegal union-busting. As gig and contingent employment mushrooms, many workers now can’t even legally picket their real boss. Farm and domestic workers were written out of US labor law entirely in the 1930s because of overt racial bias in Congress, and still are.

It’s therefore notable that there is no special section of the new USMCA that requires the United States to reform its labor laws in the same way it requires Mexico to do, and liberal Democrats and the AFL-CIO don’t even suggest it. Their silence shows eloquently that they don’t even expect the trade agreement process to enforce US workers’ rights.

Putting all the onus on Mexican enforcement is not only one-sided; it also promotes the idea that Mexican workers are a danger to the jobs of US workers, rather than the lack of labor rights here at home. President Trump has used the USMCA negotiations to whip up nationalistic fervor against Mexico, saying his trade agreement will protect American jobs, while history shows clearly that it will not. But his anti-Mexico nationalism, calculated to win votes in 2020, nevertheless obscures his attacks on workers here.

AFL-CIO President Trumka has said, “We are working to try to get an agreement worthy of the American economy and the American worker.” Such an agreement, however, should prohibit investment decisions that increase poverty across North America, rather than accepting poverty and displacement as unfortunate byproducts of trade. It could mandate works councils to give unions power over company investment decisions, guarantee labor rights across borders, and even demilitarize the US-Mexico border itself. 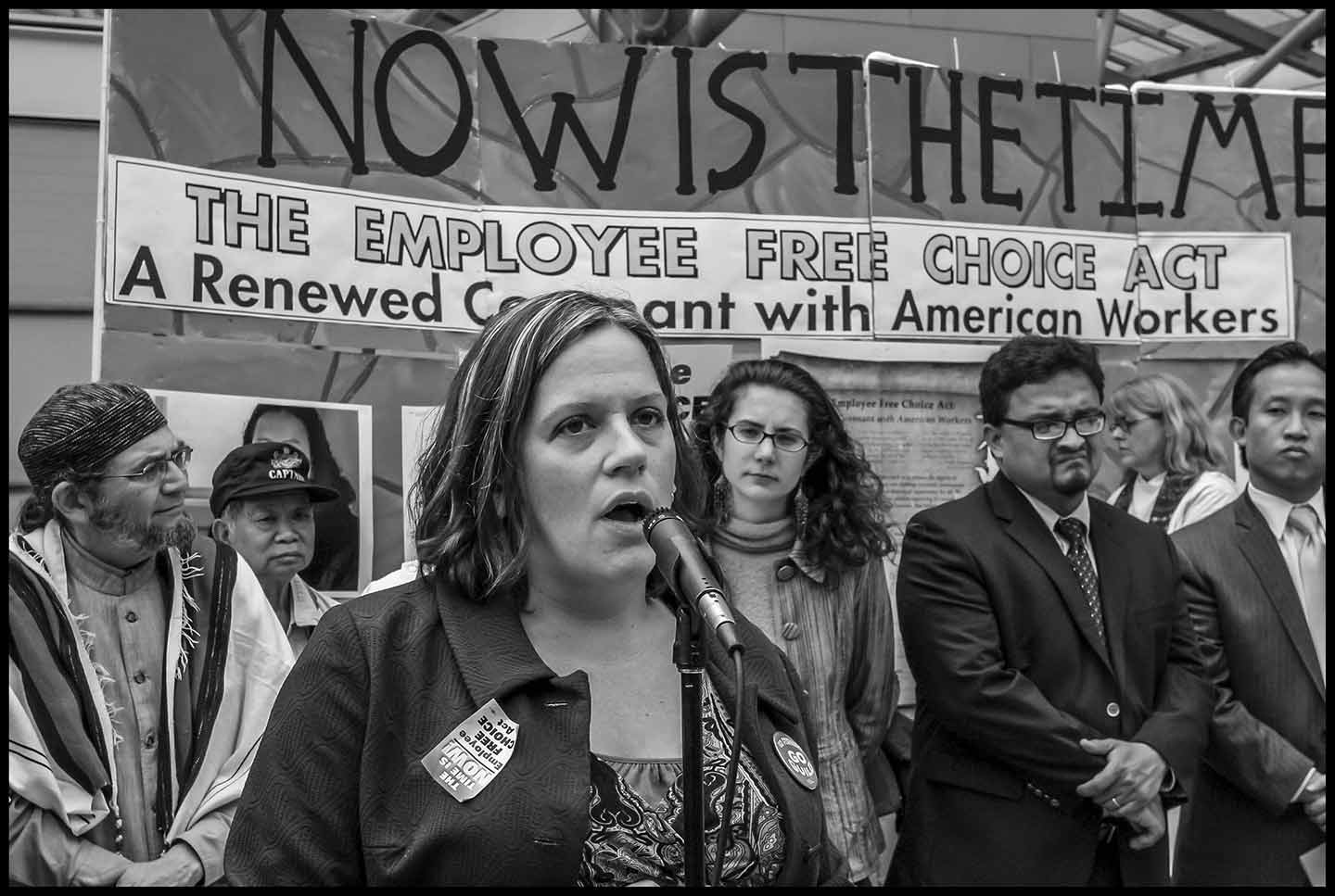 In 2009, Sara Steffens—after being fired from her job as a reporter for heading the union organizing drive at the Contra Costa Times—called for passage of labor law reform in the US. Today Steffens is secretary-treasurer of the Communications Workers of America. (David Bacon)

Instead of tinkering with a new NAFTA, congressional left-wingers should put an agreement like this on the table, and unions should step up concrete action to defend workers’ rights in both countries. Solidarity with unions fighting in Mexico is a much more effective strategy than pressuring Trump trade negotiators.

The fact remains that workers in this country have a common interest with workers south of the border. NAFTA 2.0 will not improve their lives and does not deserve working-class support.