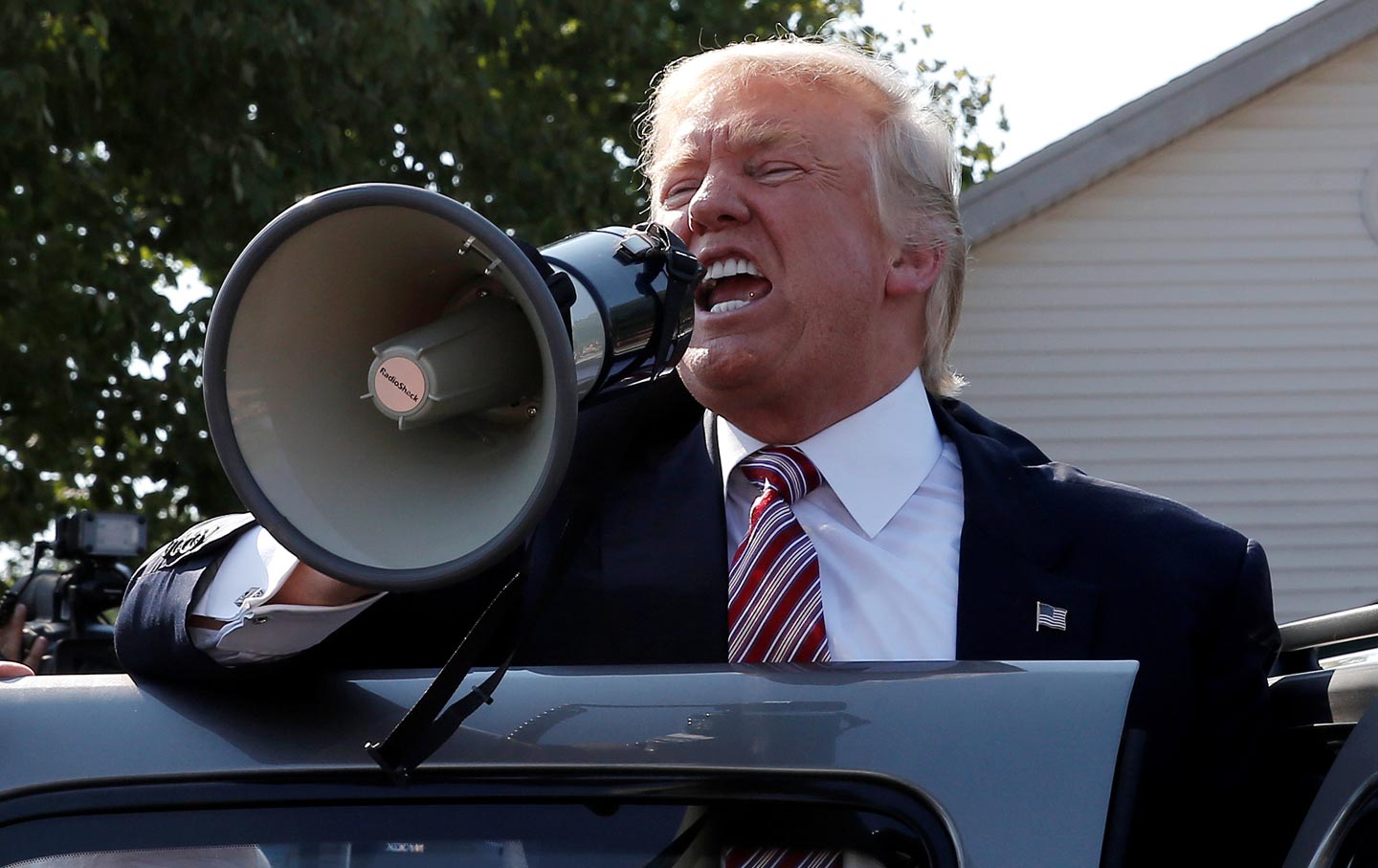 If Hillary Clinton loses the election, it is because she has nothing much to say in response to Donald Trump’s most incendiary issue—how globalization has devoured American prosperity, especially for the working class.

If Donald Trump loses the election, it is because he forgot to take his meds before the first debate with Hillary.

The media consensus says HRC demolished Trump, and maybe so. But I remember how many times the media consensus has been wrong about Trump. Instead of pretending to be presidential, Trump stayed in character—the rude egomaniac who enjoys dropping ugly slurs on his rivals or Mexicans or women or even Muslim gold-star mothers. Trump sprinkles poison over everything he has to say, even as his advisers try to paper over his bigoted insinuations.

Instead of scolding Trump or praising him, I want to talk about the great debate we didn’t get to hear. Trump delivered his usual zingers about American companies abandoning the United States and taking good jobs elsewhere. America, he says, is “being ripped off by every single country in the world,” he declared. Some of his proposed solutions are plausible; many are over the top and dubious.

Hillary Clinton brushed off his accusations with I-feel-your-pain solicitude for losers. Give her this much: She is steadfast and loyal in evading any admission that her husband’s presidency spilled a lot of the blood in the deindustrialization of American manufacturing. So long as she refuses to acknowledge that political connection, she feels no obligation to propose plausible remedies. She has little to propose about disassembling the fierce engine of maldistribution generated by the US version of globalized industry.

Her campaign platform, pulled leftward by the Bernie Sanders challenge, includes many worthy social measures to reduce inequality and support family life (social protections that have existed for decades in Europe). But Clinton’s reforms would treat the symptoms rather than confront the causes of deteriorating income security. So long as the US approach to globalization generates still greater downward pressure on US jobs and incomes, the bleeding is bound to sow greater distress and future seasons of political rebellion.

Trump’s remedies mostly speak to nostalgic longing—wishing for a return of the good old days—but give him this: He, along with Bernie, managed to restore the injury and anger of the working class to a central preoccupation of the political system. For the first time in decades, alienated Americans heard a presidential candidate who talked like them.

Furthermore, he achieved this by mashing together a unique mix of issues. Some days he sounds like a labor Democrat railing at the trade deals that gutted US manufacturing. Other days he is a frothy right-winger building a wall to keep out the Mexicans. Or a Reaganite conservative determined to cut taxes for big business and billionaires. He also sounds like bleeding-heart liberals defending Social Security against attacks by the money-hungry financial industry.

During the GOP primary season, Trump was careful not to label himself or his proposals as Republican. After all, he was contradicting conservative icons like free trade and the US Chamber of Commerce. Losing American “greatness” was depicted as a bipartisan collaboration. It was only after he secured the GOP nomination that he laid the blame exclusively on the Democrats—the Clintons and President Obama.

Hillary Clinton took the bait. She asked voters to defend US greatness against Trump’s crude attacks in a season when nearly 70 percent of voters said the country is on the wrong track. Portraying Trump as unpatriotic did not sell.

Trump found a label for his hybrid agenda almost by accident. In an interview in March with The New York Times, correspondent David Sanger asked if Trump was essentially advocating a policy of “America First.” Yes, Trump answered without hesitation.

“Not isolationist, but America First,” he said. “I like the expression.”

The label is tainted with negative overtones, including anti-Semitism, because it was the banner for the isolationist movement before World War II, when many Americans wanted no part of the war in Europe to stop Hitler. A more reasonable interpretation now is that Trump was simply saying, let’s take care of the homeland first instead of poking around looking for trouble in other people’s neighborhoods or making stupid trade deals that benefit competitors but not America.

Trump’s big problem is that his ignorance overlaps with his arrogance. In this week’s debate, he again trotted out his argument that the United States should seize Iraq’s oil to pay for the US efforts to destroy ISIS. “To the victor goes the spoils,” he has declared. Trump doesn’t seem aware that this would constitute a war crime under international humanitarian law. After Hitler plundered Europe, conquering nations were prohibited from confiscating a defeated nation’s assets.

In his clumsy way, despite his breathtaking ignorance, Trump is essentially defining a new industrial policy for America—a new doctrine for how the United States might engage globalization in the national interest. His language is rough-hewn and melodramatic—short jabs and incomplete sentences—so it is impossible to know precisely what he intends. He has taken glancing swipes at the subject but only a beginning.

I think Trump is creating a new pivot point for political debate. Isn’t it time for the United States to let go of its neocolonial hubris and back away a bit from our self-proclaimed role as “the indispensable nation”? What are the true costs for the country of attempting to enforce world peace anywhere and everywhere while also inventing new rules for the global trading system? Is American “greatness” being torn up by its own imperial ambitions?

That is the debate I wanted to hear in 2016, because the consequences are already bearing down on us. If political leaders won’t take up the challenge, citizens can do their own digging. The first step is to understand that trade agreements and the dictates of international trade organizations are not the heart of the matter. The place to start digging is with the individual industrial strategies created by national governments to guide or control their own industrial sectors.

Americans could start by asking the German people how they succeed in the age of globalization. How did the German industrial economy manage to rise from the ashes of fascism to become arguably the most successful advanced economy in the world? What do the Germans understand that American leaders don’t get?

The facts are not secret. German manufacturing wages are 35 percent higher than US wages ($48.98 an hour versus $36.34 in 2013). Thirty years ago, the United States was first in wages except for a few very small nations in northern Europe. As of 2013, the United States is 14th, Germany fifth.

Despite its high wages, Germany is “an export powerhouse,” as economist Robert Pollin of UMass Amherst put it. Especially compared to the United States. “They achieved this success through aggressive industrial policies,” Pollin said. In other words, the German government shaped the structure and performance of its major industrial sectors to produce these results.

The United States did roughly the opposite. Through trade deals and business-favoring tax cuts, Washington shaped the US industrial structure to enable companies to shift manufacturing jobs offshore.

Germany now runs annual trade surpluses of around $275 billion, while the United States has trade deficits of $745 billion. American officials like former Federal Reserve Chairman Ben Bernanke criticized Germany for running surpluses that take exports from competing nations. German officials operate with what could be called a policy of  “Germany First.”

America needs a new industrial policy; that is the subject I explore in my next Naked Democracy blog.