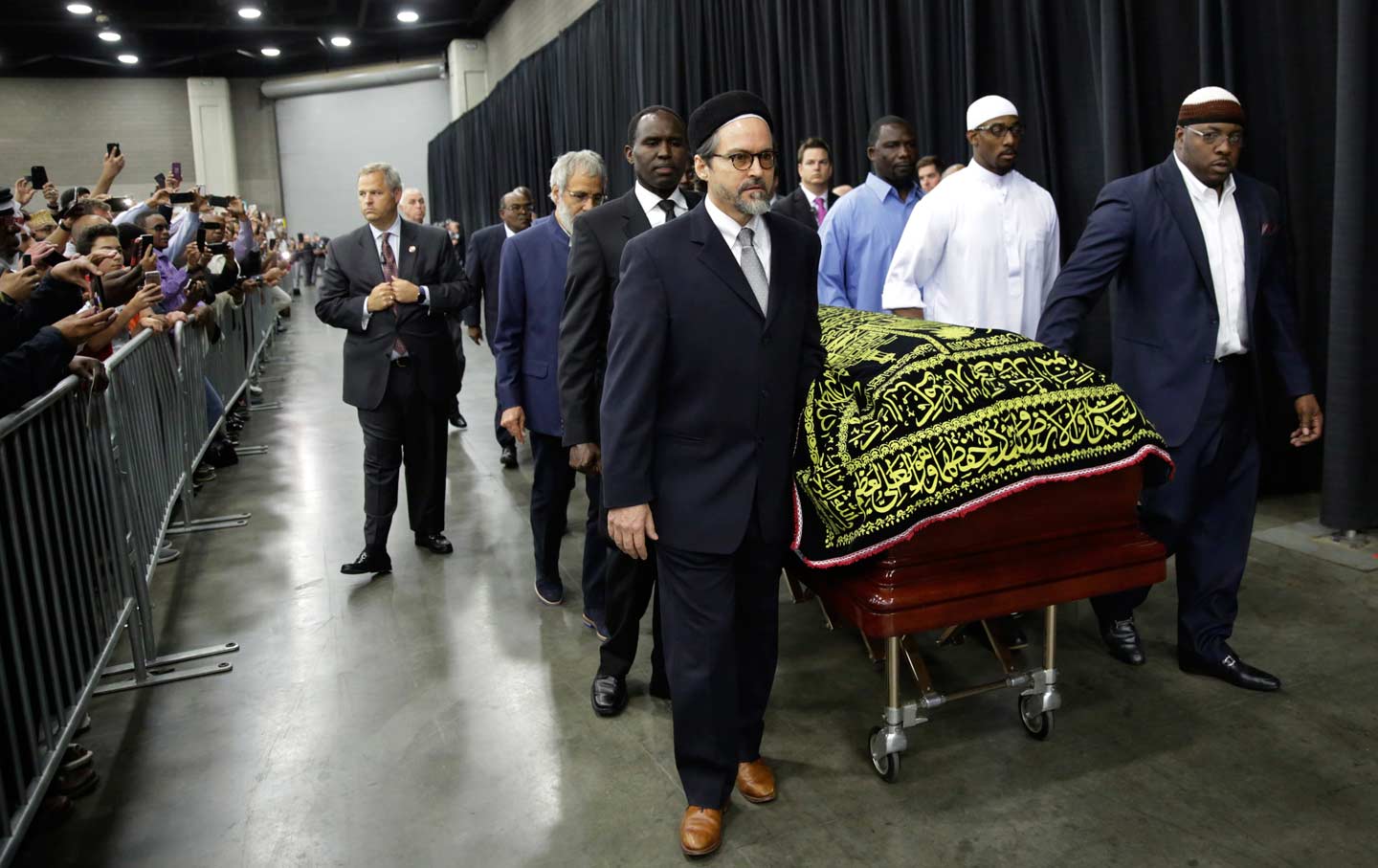 Louisville, Kentucky—Five hundred thousand people were expected to line the streets for a 23-mile processional, followed by funeral services for Muhammad Ali in front of 22,000 people at the KFC Yum! Center. Former President Bill Clinton delivered the eulogy, which meant the Secret Service was in charge of heavy security. Metal detectors were everywhere.

It was difficult not to feel conflicted about all of this: security perimeters, the Secret Service, the KFC Yum! Center. It’s a painful way to say goodbye to a man who walked the streets in his prime without bodyguards and said, “I’m an easy target. I’m everywhere; everybody knows me. I walk the streets daily, and nobody’s guarding me. I have no guns, no police. So if someone’s gonna get me, tell them to come on and get it over with—if they can get past God, because God is controlling the bullet.”

Bill Clinton’s presence also stung. The signer of the crime bill, the author of the Iraqi sanctions that killed hundreds of thousands of Middle Eastern children, the father of welfare reform, the rebuker of Sister Souljah, said the last good-bye to Muhammad Ali, who for so many remains a towering symbol of resistance to empire, racism, and war.

It hurt, on one hand. But on the other, this entire tableau spoke to something greater. It spoke to the fact that Muhammad Ali was never defeated. They tried to jail him, blacklist him and silence him, and they embraced him only when he lost his ability to speak. But they never beat him. The city of Louisville, whose elected officials condemned Ali when he resisted the military draft, is now the home of Muhammad Ali Blvd and the Muhammad Ali Center, and has just seen a funeral fit for the man who called himself King of the World. Bill Clinton’s central role was really just an extension of every president since Gerald Ford who has tried to bask in Ali’s glow. Lyndon Johnson and Richard Nixon tried to break him, and it didn’t work. So they embraced him.

It’s never pretty to see icons of resistance stripped of their radical content and transformed into something they weren’t. But in a perfectly poetical way, the need to appropriate Ali has given us his last great political statement. In a year when one presidential candidate is a raving bigot who wants Muslims banned from entering this country and the other is a war hawk who has supported every military intervention in the Middle East, one of the reddest states in the union paid homage to the most famous Muslim on earth.

Powerful world leaders tipped their hats and bowed their heads. Warmongers paid respect to the most famous draft resister in the history of war. Bigots were forced to acknowledge the greatness of someone who once said, “The real enemy of my people is here.” And somewhere, someone is going to watch this funeral and feel as proud in their own skin as the black and brown people 52 years ago who felt a new flush of pride the first time they heard the heavyweight champ tell the world that he was “the Greatest.”

It was said by W.E.B. Du Bois that boxing great Jack Johnson was hated for his “unforgivable blackness.” Muhammad Ali—as his funeral will attest—will forever be remembered for a blackness that wasn’t “unforgivable.” It was unbreakable.