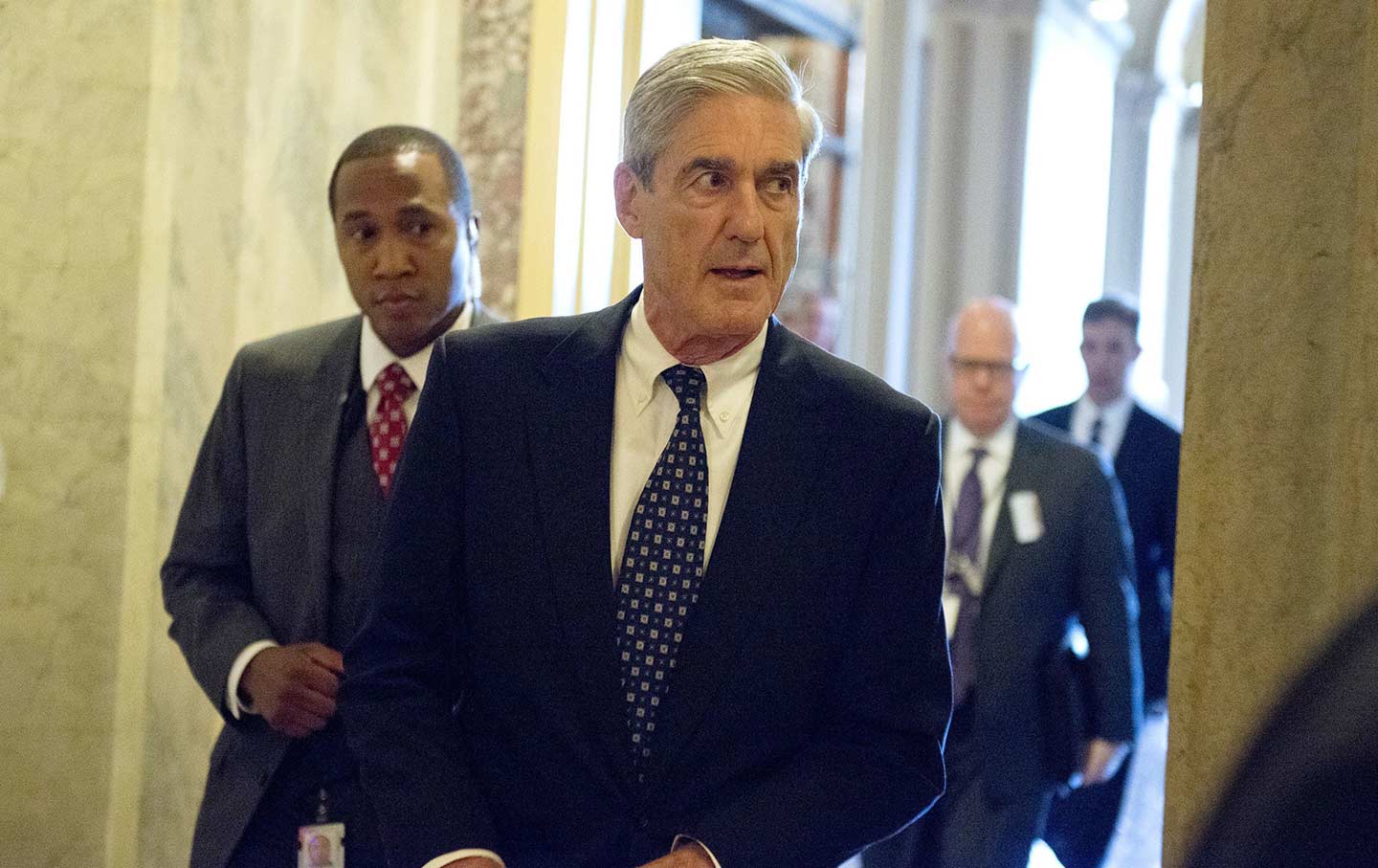 Special counsel Robert Mueller’s Russia investigation “could last at least another year,” The Washington Post reports. “Members of Mueller’s team have told others they expect to be working through much of 2018, at a minimum.” The news could antagonize President Trump, whose first year in office has been dogged by the Russiagate controversy. But while a prolonged probe carries downsides for Trump, the far greater risk may actually be to those who oppose him. Even as a Russiagate cloud hangs over the White House, a Russiagate blizzard has engulfed the media and whited out the political space from which the Republican agenda might be challenged. And that’s a bad omen when much of that storm is self-generated.

The current worry of liberals and other Trump foes is that the president will fire Mueller before the probe is complete. Mueller’s dismissal would cause a “constitutional crisis” (Max Boot, Joe Scarborough, Senators Dick Durbin and Ron Wyden), that would cross an “absolute red line” (Eric Holder). “Be prepared to take the streets,” prominent Resisters urge (Rob Reiner), in order to stop what would be “an attack on our Republic” (Walter Shaub). With over 100,000 petition signatories answering the call, a coalition of liberal groups declares that “the Resistance is mobilized.”

It is a critical time for a mobilized Resistance, just as Republicans have passed a tax bill that includes permanent corporate tax cuts and will leave as many as 13 million without health insurance. But is Mueller really at risk? It is true that Trump supporters in Congress and right-wing media outlets have issued calls to fire Mueller and investigate perceived anti-Trump bias in the Justice Department. But President Trump says that he has no plans to fire Mueller, and CNN reports that he has even been “boasting to friends and advisers that he expects Mueller to clear him of wrongdoing in the coming weeks.” The speculation kicked into high gear only after a Democratic lawmaker, Representative Jackie Speier of California, relayed what she described as a less-than-definitive “rumor on the Hill.” Even if Trump is bluffing, he lacks the authority to give Mueller the pink slip. The official who could, Deputy Attorney General Rod Rosenstein, has expressed full confidence in Mueller and his probe, so Trump would have to fire Rosenstein and any other successor who wouldn’t comply.

The concern over Mueller’s job security coincides with outrage over Trump’s continued refusal to confront the alleged Russian meddling that Mueller is investigating. Capturing the prevailing lament, the Washington Post editors scold Trump for ignoring “big and virtually uncontested truths: that the regime of Vladi­mir Putin intervened in the 2016 election with the intention of harming U.S. democracy; that it will almost certainly seek to do so again,” and for failing to mount a “concerted effort to defend the country from this national security threat.” In a heated exchange, CNN media reporter Brian Stelter complains to White House aide Kellyanne Conway that “the way Russia attacked us last year is the biggest story I can think of…. they’re going to attack us in the midterms, and I don’t see your boss doing enough to protect us.”

But what exactly is Trump to protect us from? The basis for the “virtually uncontested truths” of the year’s “biggest story” remains the Office of the Director of National Intelligence’s January 2017 report, which accused Russia of hacking Democratic e-mails and using social media to influence the 2016 election. Yet the report openly acknowledges that its conclusions are “not intended to imply that we have proof that shows something to be a fact.” Nearly one year later, we have yet to see a shred of proof.

What we have in its stead is a stream of Russiagate stories that make bombastic entrances only to quietly slink away. The pattern persists thanks to a media and political culture that embraces credulity and shuns accountability.

Virtually every major outlet reported claims in September that Russian-government-backed hackers targeted the voting systems of 21 states. But last month Christopher Krebs, a senior cyber-security official at the Department of Homeland Security, informed a House panel that “the majority of the activity was simple scanning…Scanning is a regular activity across the Web. I would not characterize that as an attack.” He added: “When we talk about that scanning, it was not also necessarily an election system that was scanned.”

Krebs’s testimony did not ring out among the media that had fervently reported the scanning as a hacking attack, and continue to do so as part of Russiagate’s “virtually uncontested truths.” The actual substance of the “21 states” claim went largely underreported, outside C-SPAN and the marginal Russian website that took notice.

Meanwhile, accountability has been resisted even when the mistakes are seismically embarrassing. The most recent case was CNN’s erroneous report that the Trump campaign was offered access to Wikileaks’ trove of stolen Democratic Party e-mails before their public release. In a story line worthy of Better Call Saul, it turned out that CNN got the date wrong—someone had in fact e-mailed the Trump campaign a link to the Wikileaks e-mails, only after they were already all over the Internet. As Glenn Greenwald noted, the mistake was egregious not just for the story’s ultimate uselessness, but also for the fact CNN and other outlets all reported they had confirmed it with multiple sources. Yet none of the networks have explained how their “multiple sources” all “confirmed” the same incorrect date.

Rather than offer an explanation, CNN media reporter Brian Stelter failed to even raise the issue on his program Reliable Sources. Instead, David Frum, the former George W. Bush speechwriter who coined the phrase “Axis of Evil,” was on hand to explain to Stelter that the media are bound to err in their “process of bringing truth to light,” which is why, he concluded, “mistakes are precisely the reason the people should trust the media.”

An uplifting takeaway. One alternative, of course, is that people ought to be wary of trusting media that won’t own up to their mistakes. I asked Stelter by e-mail why he did not raise the issue of how CNN could have claimed to have confirmed with “multiple sources” a story that turned out to be false, and whether he planned to find the answer. He referred me to a CNN spokesperson who declined my interview request on his behalf.

The appearance of an Iraq War propagandist to defend CNN’s gaffe with postmodern epistemology is part of an elaborate media and political performance that is hard to distinguish from self-parody. Another CNN luminary, James Clapper, the director of national intelligence from 2010 until this past January, recently shared with viewers that Putin “knows how to handle an asset, and that’s what he’s doing with the President.” Putin’s deftness at manipulating his American asset may predate his oft-cited days as a KGB officer. “The Russians,” Clapper told NBC in May, “are almost genetically driven to co-opt, penetrate, gain favor, whatever, which is a typical Russian technique.”

But Russian manipulation is not confined to this side of the Atlantic. Just weeks ago, The New York Times warned that reports of Russian-linked social-media activity around the Brexit vote “could raise questions about the legitimacy of the referendum” itself. “I have a very simple message for Russia,” declared British Prime Minister Theresa May on November 13. “We know what you are doing. And you will not succeed.”

We now have a full accounting of what Russia was doing: According to Twitter, the Kremlin-backed network Russia Today spent just over $1,000 to promote its Brexit coverage to UK-based viewers. Facebook reported a grand total of 97 cents spent on three ads, “all centered on immigration and aimed at American users,” reaching no more than 200 of them over four days. Whatever Russia was doing, May’s confidence that they would not succeed was doubtless well-founded.

The unquestioning faith in evidence-free or overblown claims coincides with the targeting of those who dare challenge them. The forced registration of RT America as a “foreign agent” was followed by the revoking of the outlet’s congressional press pass, with the usual silence from press-freedom groups and media outlets, even progressive ones. Without explanation, The Huffington Post removed an article by veteran reporter Joe Lauria that methodically challenged Russiagate’s precepts. On Tuesday, Green Party candidate Jill Stein confirmed that she is complying with a Senate Intelligence Committee investigation looking into, in the words of panel chair Senator Richard Burr, “collusion with the Russians.”

Despite multiple interviews explaining the nature of a 2015 trip to Moscow, Stein remains the target of a smear campaign, cheered on by liberal groups, painting her as a Kremlin stooge. “Here’s hoping this lying sack of piety-spewing shit goes to jail with the rest of the bastards Mueller is investigating,” commented liberal sex-advice columnist Dan Savage. Zac Petkanas, a Democratic Party senior adviser and Clinton campaign staffer, was so enthused by the Senate probe that he repeated the phrase “Jill Stein is a Russian agent” to his Twitter followers eight times.

Stein calls the investigation part of a “resurgence of McCarthyism, to suppress opposition voices, to suppress independent politics.” But for its proponents to recognize that would mean acknowledging that it derives from the same kind of behavior that is recognized in Trump. “Any genuine interest in objective reality left the building a while ago, replaced by a self-sustaining fantasyland,” the New York Times editors write of Trump’s right-wing defenders. The tragedy of Russiagate is that its enthusiasts have constructed a “self-sustaining fantasyland” of their own. A fantasyland is no place from which to confront Trump’s reality.

Editor’s Note, January 19, 2018: This post was edited after publication to more accurately reflect the substance of Christopher Krebs’ testimony to Congress.