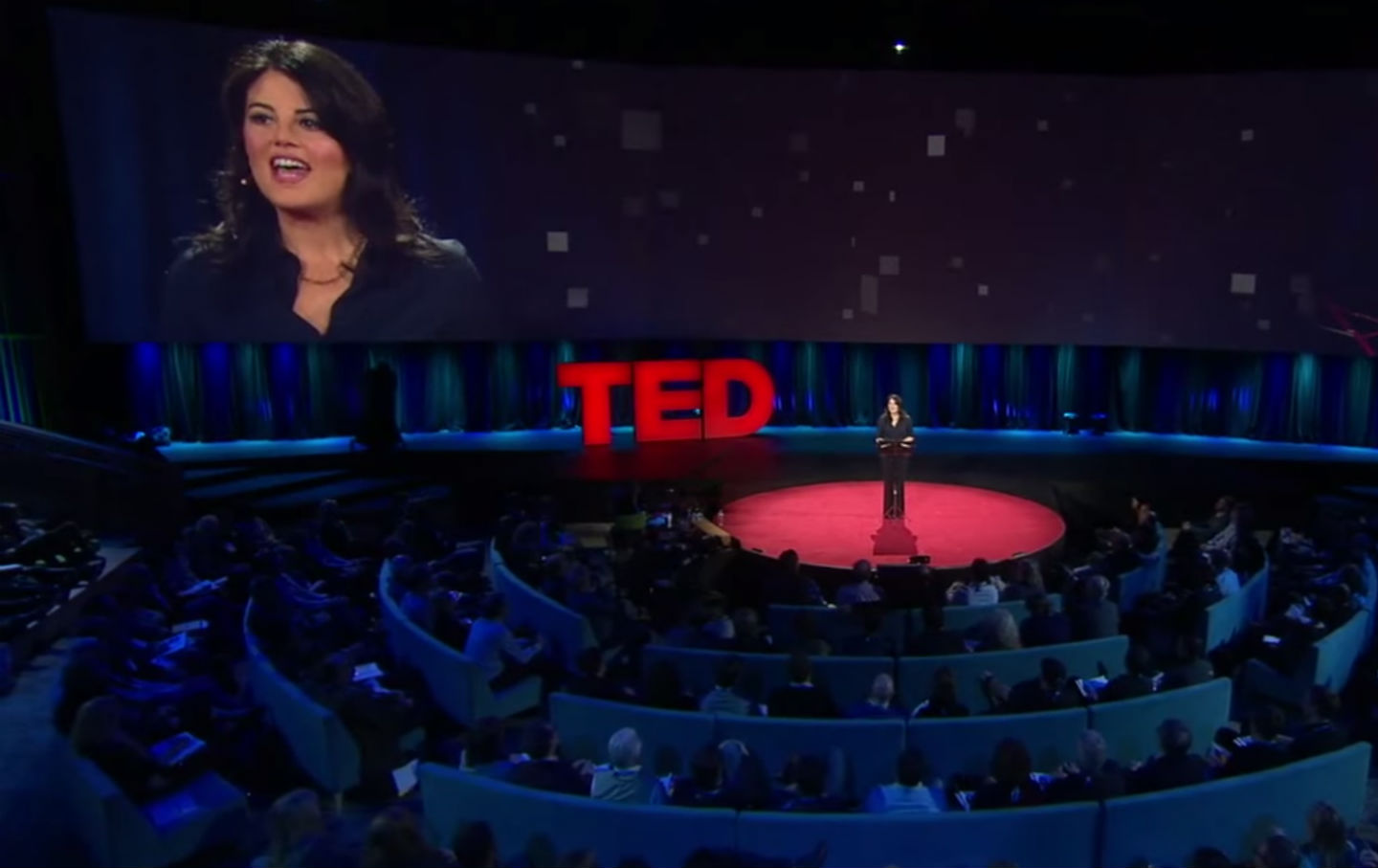 Monica Lewinsky gives a TED talk on "the price of shame" in March 2015. (TED/YouTube)

In Dave Eggers’s 2013 novel The Circle, an all-powerful Google-Twitter-Facebook-Meerkat-like conglomerate challenges a billion of its devoted users to crowd-source the capture of a fugitive child-killer, in twenty real-time minutes. From photos, the perp is quickly identified—without independent verification—as an old woman in Leeds, England.

“Are we sure we want to find this hag?” the most-liked online comment snarks. “She looks like the Scarecrow from the Wizard of Oz.” Locals track her down at her job at a laundry, and as the whole world watches live, the woman, her face “at once terrified and defiant,” is “trapped against a wall, surrounded by a dozen people, most of them holding their phones to her, aiming them at her. There was no possibility of escape.” She collapses and is hauled off by the police. The Circle found her with nine minutes and thirty-four seconds to spare.

Jump to real life and the circle remains unbroken.

The same year Eggers’s novel was published, a publicist named Justine Sacco sent out a clumsy tweet while on a flight to South Africa: “Going to Africa. Hope I don’t get AIDS. Just kidding. I’m white!” Then, as Jon Ronson recounted to Jon Stewart last week to promote his new book, So You’ve Been Publicly Shamed, all hell broke loose. While Sacco was still in flight, a global cyber-mob started passing her “disgusting racist tweet” (as one tweeter called it) around as an example of unacceptable speech. Soon, Ronson writes in a book excerpt, a tweet came in

from her employer, IAC, the corporate owner of The Daily Beast, OKCupid and Vimeo: “This is an outrageous, offensive comment. Employee in question currently unreachable on an intl flight.”

And that brought out a kind of instantaneous circling, tying the Internet’s capacity for snap judgment to a digital witch hunt:

A new hashtag began to trend worldwide, and someone tweeted, “is there no one in Cape Town going to the airport to tweet her arrival? Come on, Twitter! I’d like pictures #HasJustineLandedYet.”

A local user obliged, posting her photo online and writing, “Yup. @JustineSacco HAS in fact landed at Cape Town International. She’s decided to wear sunnies as a disguise.”

In the name of opposing racism, this digital mob didn’t trap Sacco against a wall, exactly. Instead, she lost her job, not to mention her sense of security and identity. Sacco was “destroyed,” Ronson told Stewart, not by monsters, but by “nice people like us.”

The kicker, Ronson says, is that her comment wasn’t racist, but was instead a poorly delivered critique of whites’ “tendency to naïvely imagine ourselves immune from life’s horrors.”

It was what Ted Cruz might consider a form of reverse racism. “To put it simply,” Sacco told Ronson, “I wasn’t trying to raise awareness of AIDS or piss off the world or ruin my life. Living in America puts us in a bit of a bubble when it comes to what is going on in the third world. I was making fun of that bubble.”

Ronson writes that he himself had once been “a keen shamer. When newspaper columnists made racist or homophobic statements, I joined the pile-on. Sometimes I led it…. As time passed, though, I watched these shame campaigns multiply, to the point that they targeted not just powerful institutions and public figures but really anyone perceived to have done something offensive.” He “began to marvel at the disconnect between the severity of the crime and the gleeful savagery of the punishment.”

For his book, Ronson interviewed “everyday people pilloried brutally, most often for posting some poorly considered joke on social media.… The people I met were mostly unemployed, fired for their transgressions, and they seemed broken somehow—deeply confused and traumatized.”

Another thing they have in common is a mediasphere that presents content without context, and apparently without the shamers pausing to ask themselves whether their rage is justified. But it wasn’t just thousands of impulsive individuals who rushed to judgment. “Respected” sites, like Buzzfeed, which followed her online trail and published “16 Tweets Justine Sacco Regrets,” played a major role in egging on the mob.

Now, we can say what happened to Sacco is just awful, that we would never do that. But when the shaming comes in the thoroughly amicable form of John Oliver, it’s still harder to see it coming.

On his show a week ago Sunday, Oliver was doing a great bit on how municipalities like Ferguson, Missouri, are “balancing their books on the backs of some of their most vulnerable citizens,” as he said. “We cannot have a system that where committing a minor violation can end up putting you in—and I’m going to use a legal term of art here—the fuck barrel.” In fact, the Declaration of Independence should include “the right to fuck up every once in a while without it completely destroying our lives.”

And yet, to illustrate his point, Oliver ran a clip of a cop giving a woman a traffic ticket. Rather than being one of society’s “most vulnerable citizens,” this woman came off as privileged and obnoxious, telling the mild-manned cop, “I know my headlights weren’t on, Yadda, yadda, yadda…. Like I totally get it, like it’s a ticket, I need to pay it, I’m late.”

The clip, from the reality show Speeders, is at least five years old. But Oliver gratuitously brought the unidentified woman’s personality right into 2015. “You just know that woman behaves that way in every situation,” he laughed, adding (shades of Justine Sacco), “She’s probably not thought about that ticket until, I’m guessing, ’round about now, when she’s getting a lot of text messages from friends saying, ‘Amber, you’re totally on HBO right now shouting at a cop!”

Actually, we don’t know how she behaves “in every situation,” and we don’t know the context back then—was she rushing to deliver medicine to orphans, or to her spa? But it shouldn’t matter anyway: Oliver put her in the fuck barrel for a minor violation. And, hey, who’s not obnoxious at times? Should we lose our right to fuck up every once in a while without it completely ruining our lives?

Like millions on social media, Oliver does a great service when he goes after the sins of the powerful and the stupidities of our system. This time, however, he forgot to punch up, not down.

Our small and everyday cruelties aren’t necessarily caused by a lack of character. Some are baked into our technology. On the Internet we can hide behind anonymity, of course, but more specifically, we’re living through what Stephen Marche calls an “epidemic of “facelessness.”

“The precondition of any trial, of any attempt to reconcile competing claims, is that the victim and the accused look each other in the face,” he writes. “Inability to see a face is, in the most direct way, inability to recognize shared humanity with another.”

And checking out faces on a series of screens doesn’t quite cut it. Without actually seeing other individuals—and them seeing us—we get our ethical cues from the faceless crowd of millions.

The solution isn’t to shame the shamers. Monica Lewinsky, who aptly describes herself as “Patient Zero of losing a personal reputation on a global scale almost instantaneously,” says try a little empathy.

“Public humiliation as a blood sport has to stop,” she said at her recent TED talk. “…Just imagine walking a mile in someone else’s headline.”