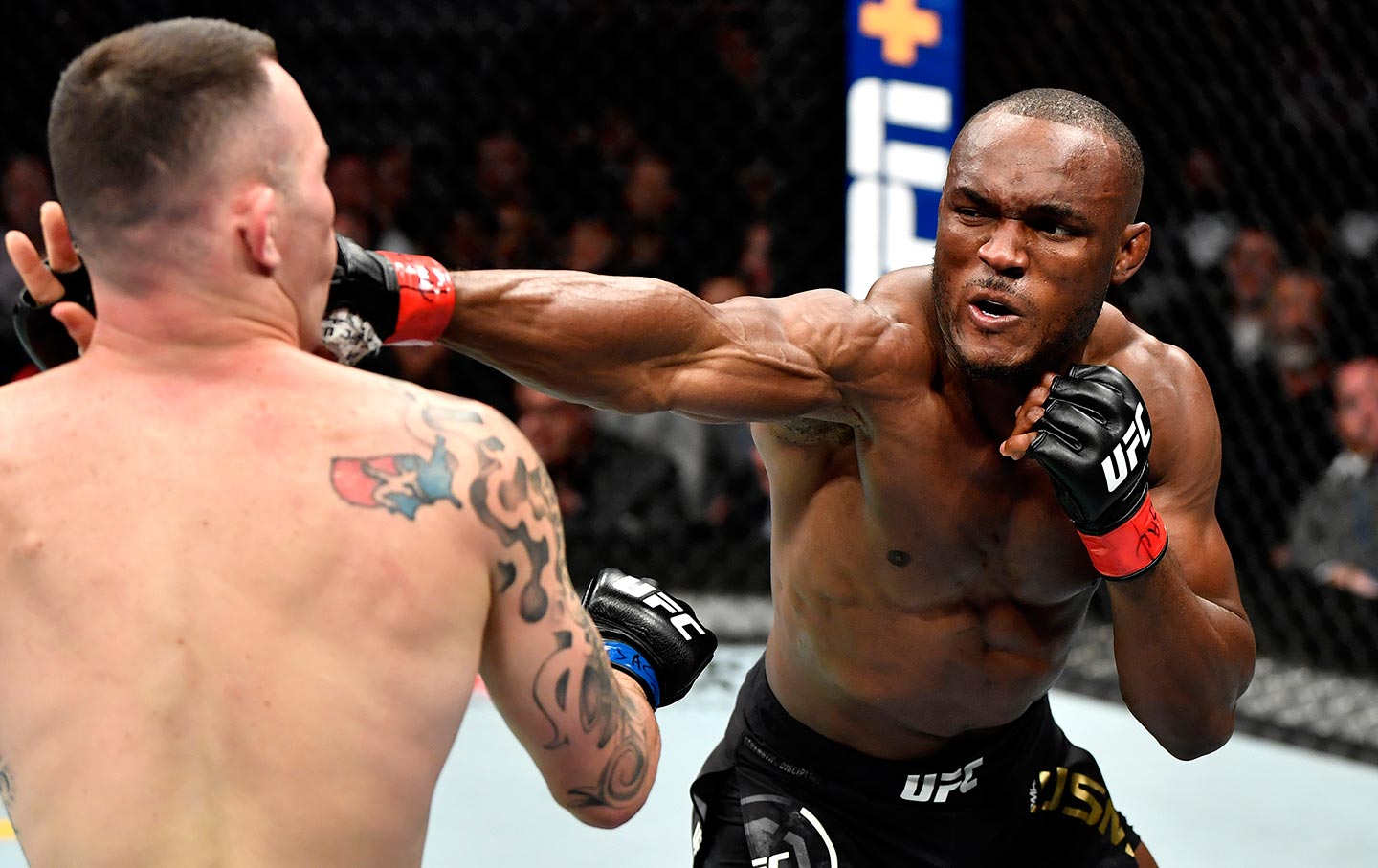 No sport has projected politics into play quite like boxing. From Jack Johnson’s defeat of the “great white hope,” Jim Jeffries, to Muhammad Ali’s beating down opponents who wouldn’t call him by his Muslim name, this has been an arena where far larger issues have been negotiated than just who could execute a tight jab/hook combo. As Lou Moore, author of the terrific book I Fight for a Living: Boxing and the Battle for Black Manhood, said to me, ”Boxing is two people with no supposed advantages. It’s one of the few places where the system feels truly level. Thus fans have always seen the ring and fights as contests of superiority where they can live vicariously through their fighters.”

Colby Covington has chosen to brand himself as a Donald Trump fanatic, much to the delight of the easily flattered, gossamer-skinned POTUS. He wears MAGA gear to the octagon, and that’s just for starters. He is also known for what the MMA media has cautiously called his “culturally insensitive” comments, like when he said of Usman before the fight, “What has [Usman’s] family ever done for America beside serve in the federal penitentiary?”

Before the fight, Covington posted a message of support from Trump’s two potato-headed billionaire sons, and wrote, “Thank you for all the support @donaldjtrumpjr & @erictrump!!! Tonight we make fighting great again!!! This one is for The Troops and The Trumps!!!” He also pledged to bring the title to the White House after his victory.

Colby’s opponent, Kamaru Usman aka the Nigerian Nightmare, was not feeling any of this. Usman is a citizen of the United States, having emigrated to this country when he was 8 years old. By the time the fight was ready to get underway, Usman had grown enraged with this circus that put his citizenship and humanity up for debate. Before the opening round, Usman threatened to “put the wrath of every immigrant in this country” on Covington. He also said the following on Joe Rogan’s MMA podcast: “Part of what this next fight symbolizes to me is the attitude that a lot of people have towards immigrants. A lot of people forget that Americans are immigrants. People are forgetting that, to where people have this attitude, ‘We’re Americans, go back to your country. Go back.’… I always heard that growing up. I always heard that. The more I research, it’s like, ‘What? What are you talking about’?”

Then came the fight itself. Sections of the crowd played their role, chanting “USA!” between rounds. Then just as Trump cheats at golf, Covington went for low blows, eye gouges, and then whining to the refs all in order to secure victory. He fought without honor. But his biggest problem was that Usman did not get the RNC script that he was supposed to lose and bow towards Covington’s white, nativist manhood. Instead, Usman shattered Covington’s jaw. This is not an exaggeration. He reduced Covington’s jawbone to the equivalent of crushed corn chips in a bag.

Covington then, shamelessly but true to his political masters, ducked out rather than face the press. Even with a mulched jaw, this is a major breach of UFC protocol and earned the derision of other fighters.

As for Usman, he spoke to the press following this controlled demolition of Colby Covington’s face. He was asked how it felt to have fans chanting “USA” at him, and Usman handled the query as easily as he handled his opponent.

“What you talking about?” said Usman. “They were chanting USA for me.” He then went on to say the following:

I’m not sure who in the MAGA world is going to dare tell him otherwise.