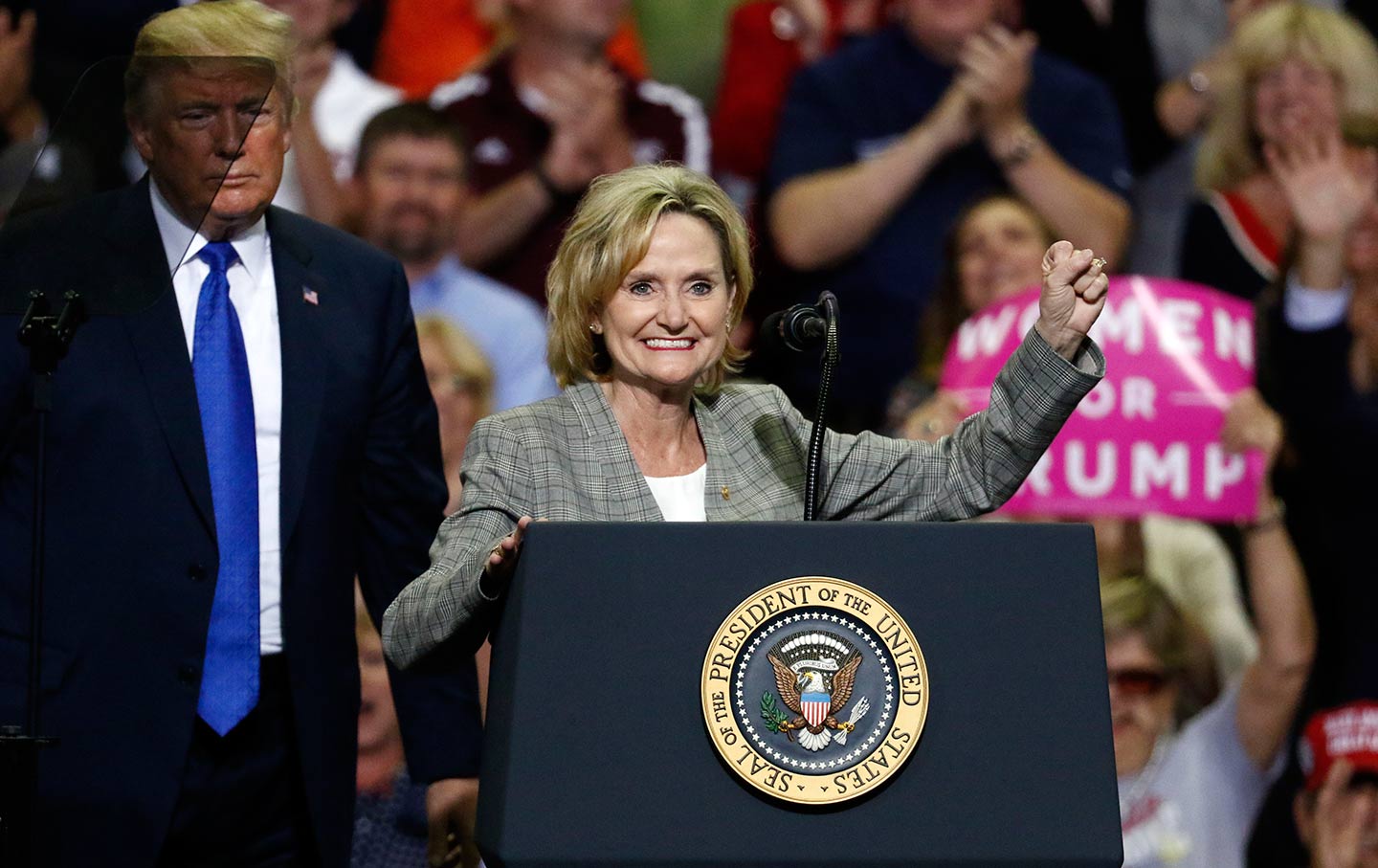 What was MLB thinking? Over the weekend, FEC filings revealed that the league gave $5,000 to Mississippi Republican Senate candidate Cindy Hyde-Smith for her surprisingly tough election campaign against Mike Espy, the winner to be determined in a runoff on November 27. This is the same Cindy Hyde-Smith who has joked about lynching, defends the Confederacy as “the homeland,” was caught on camera calling for voter suppression, and attended the same openly segregationist private school where she sends her own child.

This is the same league that bathes itself in the memory of Jackie Robinson. It boasts about baseball’s having led the way in the civil-rights movement and has retired the number 42 in Robinson’s memory. And it’s now showing some unflattering true colors. The $5,000 is a donation that the league chose to make after seven major corporations recanted similar contributions. Then, following its exposure by the newsletter Popular Information, Major League Baseball issued a statement 12 hours later, where it said that it had asked Cindy Hyde-Smith to return its radioactive five grand.

It’s a bizarre scenario: Why would the executives of a multibillion-dollar corporation like Major League Baseball risk this kind of exposure and ugly press over a small $5,000 donation to a candidate in a part of the country without a Major League team? The saddest answer seems to be that they did it because they thought they could. I reached out to baseball aficionado Kevin Powell, author of the book My Mother. Barack Obama. Donald Trump. And the Last Stand of the Angry White Man, for comment.

He said. “Mississippi Senator candidate Cindy Hyde-Smith was caught on camera saying she would be willing to attend a public hanging, while in a race against a black man, Mike Espy, in a state with a long history of terrorizing and killing black folks in all forms. Major League Baseball has forever stated its support for Jackie Robinson’s legacy, but this donation to her campaign supports racism, not Jackie, and not getting more black players back into the sport, given the current and gross absence of blacks in baseball. This is blatant hypocrisy and a blatant and sad contradiction.”

It’s not just the Major League Baseball central office that’s supporting this retrograde Bull-Connor-macaw of a politician. The billionaire owner of the San Francisco Giants, 85-year-old Charles Johnson, has given Hyde-Smith the maximum allowable donation, $2,700, and his wife has done the same. The San Francisco Giants is the team of Willie Mays, Bobby and Barry Bonds, and the recently departed Willie McCovey. Again, this is an organization that luxuriates in its black legacy. It is also, obviously, a team that that represents a fan base of a progressive community that would run a politician like Cindy Hyde-Smith out on a rail. This is Charles Johnson’s choice. But fans now have a choice as well.

As Marcos Breton from The Sacramento Bee wrote,

Charles B. Johnson, principal owner of the San Francisco Giants, is free to support financially the racist people or causes of his choice. And as someone who has followed the Giants and dumped a considerable amount of money on Giants tickets and merchandise for more than 40 years, I am free to divert my discretionary income elsewhere as long as Mr. Johnson is on the scene. That’s how America works. That is how business works. I am hereby financially boycotting the team of my youth. But Johnson is an enabler of a bigot who has espoused support for voter suppression. He has given his money to a candidate who makes jokes about public lynchings, and I can’t support that

Breton also writes, “If you don’t object to bigotry, then you support it. If you say that Johnson is a little known rich guy who happens to own the biggest piece of the Giants—and that has nothing to do with you—then you support whom he supports.”

It is a bracing comment unto itself that a sports columnist is drawing such a line in the sand, calling for a boycott, risking access, and inviting what will surely be a torrent of hate mail from locals supporting the home team and not wanting politics to mix with their sports. But it’s Charles Johnson, not Marcus Breton who is mixing sports and politics. It’s Charles Johnson who is using his team—not to mention all the corporate welfare goodies and tax breaks that come with owning a Major League franchise—as a money laundering operation in the liberal bastion of San Francisco. He is soaking city residents for nefarious political ends, whether they are baseball fans or not. Now San Francisco is indirectly supporting this reanimated Ghost of Mississippi. Again, the decision to give a pittance belies all possible logic from a business perspective. It speaks instead, whether we are talking about Major League Baseball or Charles Johnson, to a moral and political choice: to support bigotry with the expectations of favors later on Capitol Hill, hoping no one would notice.