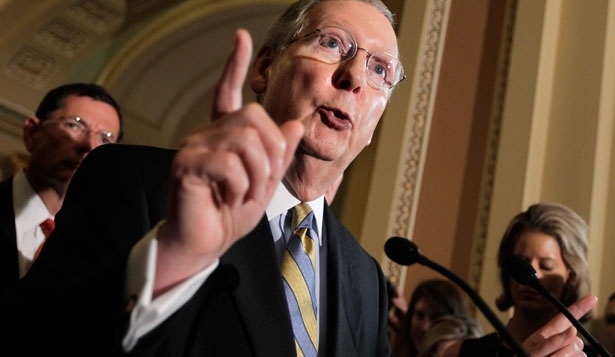 With less than two weeks to go in the Kentucky Senate race, minority leader Mitch McConnell made the unusual choice to bring up his past support for privatizing Social Security. In a speech before the Louisville Rotary Club, McConnell recalled how hard he worked to get then-President George W. Bush’s plan through Congress in 2005. Ace Kentucky reporter Joe Sonka flagged the remarks:

“After Bush was re-elected in 2004 he wanted us to try to fix Social Security,” said McConnell. “I spent a year trying to get any Democrat in the Senate—even those most reasonable Democrat of all, Joe Lieberman—to help us.”

The Bush plan, unveiled in his 2005 State of the Union speech, would have allowed workers under 55 to divert half of their payroll taxes away from Social Security and into a private retirement account. This would have created an even larger shortfall in the Social Security Trust Fund and further hobbled the insurance program—something many people suspected was a feature, not a bug, for Bush and the conservative think tanks pushing his plan.

There was immense backlash to Bush’s proposal, and Republicans never brought it up to a vote. It has since remained taboo even for many Republicans; Representative Paul Ryan dropped the idea from his budgets after the GOP took over the House.

McConnell has been very quiet on the campaign trail about his role in the congressional debate, even though he was no doubt quite active as the majority whip at the time. This appears to be the first time he brought it up since the race began.

It’s a dangerous move for McConnell, who is already being hammered by Democrat Alison Lundergan Grimes over bread-and-butter economic issues. She just released an ad featuring McConnell’s remarks to a Koch-network donor conference in which he promised not to allow a Senate debate over raising the minimum wage, enacting student-loan relief, nor extending unemployment benefits:

Sonka asked McConnell after the speech if he would once again push for Social Security privatization if he became majority leader of the Senate. McConnell said only, “We’re not in the majority yet. We’ll have more to say about that later.”

It would not be surprising if video if McConnell’s remarks Thursday end up in another campaign ad very soon.