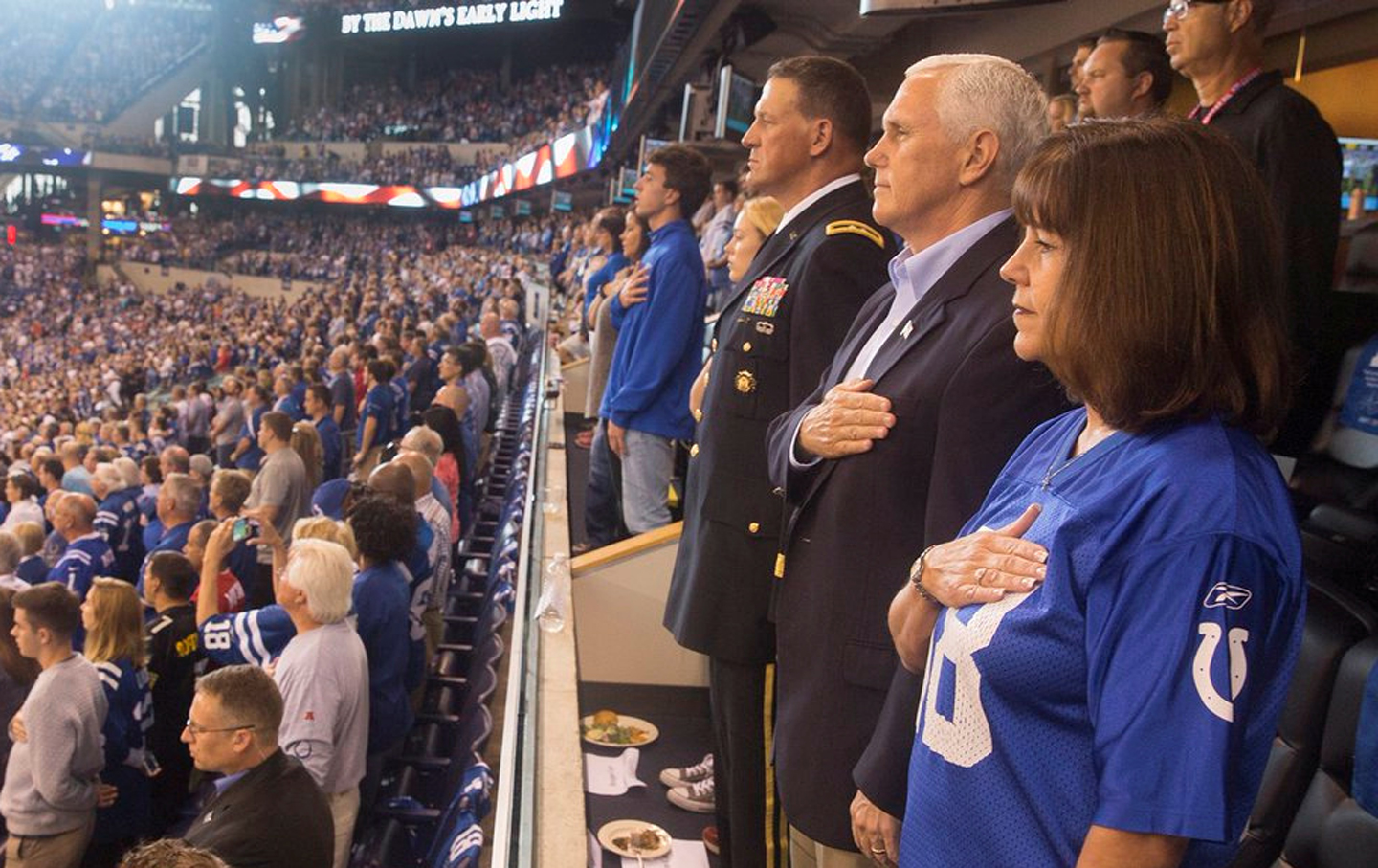 Vice President John Nance Garner once said that being the vice president was “not worth a bucket of warm piss.” (Many know this quote as “bucket of warm spit.” It’s “piss.”) The current holder of that office, Mike Pence, showed on Sunday that Garner, if alive, would owe an apology to piss buckets everywhere.

Pence used the NFL to star in a cheap, transparent political stunt. The narrative Pence tried—and failed—to sell was that he showed up at the Colts-49ers game in Indianapolis and then supposedly left in a huff after being shocked—shocked!—to see the San Francisco 49ers kneel. After assumedly taking a whiff of his personal smelling salts, he immediately released a statement that magically was already prepared, which read in part, “I left today’s Colts game because @POTUS and I will not dignify any event that disrespects our soldiers, our Flag, or our National Anthem.”

Forget for a moment that this is a vice president who fronts for a commander in chief who mocked a POW and insulted the family of a slain solider, yet blathers about “disrespect.” Forget that he just used “soldiers, Flag, and National Anthem” for his own form of protest (irony!). Forget even his bizarre capitalization of “Flag.”

It’s not what happened. It’s how it happened. This was staged: a taxpayer-subsidized stunt aimed at attacking dissenting black athletes. It was revealed in record time to be yet another toxic effort by this administration to divide people along racial lines and distract us from a train wreck of an administration, described by Senator Bob Corker as “an adult day care center” that looks after a big orange baby.

The first sign that Pence’s scurrying-off was staged: These were the San Francisco 49ers that the Colts were playing. The 49ers have been protesting racism during the anthem for over a year. Led by safety Eric Reid, the first player to kneel with Colin Kaepernick over a year ago, the 49ers are the team you’d pick if you wanted to fake outrage about someone’s peacefully protesting police brutality. Peter Alexander of NBC News tweeted almost immediately, “Reporters [accompanying Pence] were told to stay in van bc ‘there may be an early departure from the game.’” In other words, in advance of the anthem, Pence was planning to show up and then leave.

Then the veep’s own publicly available schedule tripped him up. That morning, his team let it be known that Pence would be at a California fundraiser by 6:30 pm. The plane was gassed up and ready to go. Pence actually flew from Nevada to Indianapolis to go to a game for five minutes only to fly back to the West Coast. As Sports Illustrated’s Peter King tweeted, “@VP took a taxpayer-funded airplane knowing he’d be walking out right after the anthem to protest. Swell use of our tax dollars.”

When you factor in the Secret Service, the diverting of law enforcement, as well as the clearing of air and road traffic to get him in and out, this was at least a six-figure authoritarian stunt.

Just to add an even thicker lacquer of incompetence, Pence tweeted out a photo of himself from the game; yet, as The Indianapolis Star quickly noted, the photo was from 2014.

Then, like a baby who wants to show a room of adults what’s in his diaper, Trump tweeted out that this was all his doing, hanging Pence out to dry. He wrote, “I asked @VP Pence to leave stadium if any players kneeled, disrespecting our country.”

This was amateur-hour fraud. It was Gulf of Tonkin for idiots: a ham-handed effort to isolate people brave enough to dissent in the face of the most powerful people in the world and raise issues of racism that this administration is too craven to discuss. It’s also very disturbing. The very week Sarah Huckabee Sanders spoke about Trump’s “respect for the First Amendment,” we had a staged spectacle with the highest levels of government attempting to intimidate and coerce people to not exercise those rights. It’s disgusting, and another example of Pence’s degradation, his Faustian bargain with this administration. If Mike Pence thinks he can deodorize Trump with a fraudulent photo op, he should know that even the contents of John Nance Garner’s bucket gives off less of a stench.