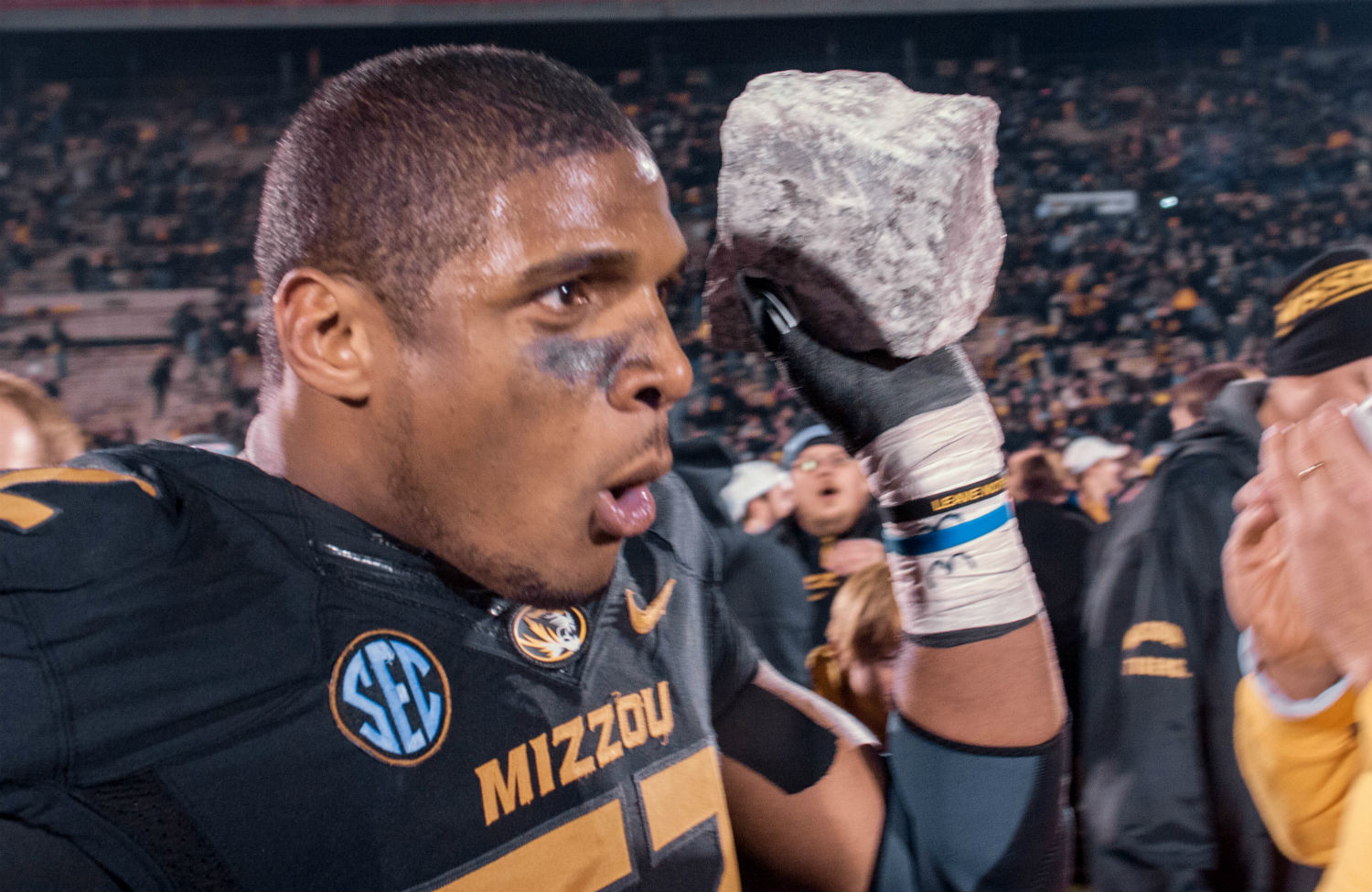 All-American Michael Sam could become the first openly homosexual player in the history of the NFL. (Marcus Qwertyus, CC-BY-SA-3.0 via Wikimedia Commons)

NFL owners are different than us regular folks—not least of which because, well, they are NFL owners. Yes they are human, rumors about Jerry Jones to the contrary, but they just have different interests. They have an interest in seeing billions of dollars in public money go into stadiums instead of things they don’t use like public libraries and schools. They have an interest in making sure that decades of health records about the ill effects of playing football remain under lock and key. They have an interest in making sure that the term “nonprofit” is as elastic as possible and that we pay taxes so they don’t have to. To paraphrase Jerry Maguire, being an owner is not just a better seat at the game. It’s a better life.

Yet there is one area where the interests of NFL owners and those of us who can’t afford a ticket to the game coincide. In this most heteronormative and image-conscious of sports, many in the NFL power structure have a family member who is openly part of the LGBT community. NFL Commissioner Roger Goodell’s brother Michael is gay. Former commissioner Paul Tagliabue’s son Drew is gay. And they are far from alone. Last generation’s closeted owners are this generation’s PFLAG parents.

This reality has never really had an effect on the cultural and corporate homophobia that defines the league. For decades, the idea of creating a locker room that could be a safe space for closeted gay players went unexplored. Gay slurs get tossed around from the locker room to the front office with little to no consequence. When the makers of Brokeback Mountain, the 2005 Oscar-nominated Ang Lee film about a same-sex love affair, asked the NFL if they could use NFL game footage on a television in the background of a scene, they were rejected. Lee had to use a CFL game and fuzz up the screen. As one person intimate to that discussion said to me, “They did not want to be associated with a ‘gay cowboy film.’ ” The league itself only sent official team guidelines about creating a nondiscriminatory environment in April of 2013.

Yet one can sense that an ownership that has had a “see no evil, hear no evil, just keep the money flowing” approach to homophobia has had enough. They have been pushed towards having a backbone and literally standing up for members of their own family by Michael Sam. On Sunday, within an hour of Missouri All-American Michael Sam coming out of the closet and as he put it, “owning my truth,” Sports Illustrated followed with a scorched-earth story from Pete Thamel about NFL executives who were saying in effect that Michael Sam’s courage may have cost him a shot in the NFL.

Yet on Monday, as every media outlet assessed Michael Sam’s “baggage” as a “distraction,” teams began to offer a counternarrative to their own doomsaying, homophobic executives.

First Goodell himself issued a statement in support of Michael Sam, saying that the league admired “Michael Sam’s honesty and courage…. Any player with ability and determination can succeed in the NFL. We look forward to welcoming and supporting Michael Sam in 2014.”

John Mara, owner of the Giants, cited the two leaders of the You Can Play movement, saying, “As Patrick Burke and Wade Davis constantly remind all of us, regardless of who you are, what your background is and what your personal or sexual orientation is, if you can play, you can play. Michael’s announcement will not affect his position on our draft board.”

Other teams, including the New England Patriots, Denver Broncos, Detroit Lions, Philadelphia Eagles, Green Bay Packers, Chicago Bears and Minnesota Vikings have released statements supporting Sam. (The Vikings are a particularly interesting team given that they have been accused by former punter Chris Kluwe of releasing him because of his support for marriage equality.)

To be clear, many players have sent messages of support as well—from Super Bowl MVP Malcolm Smith to DeAngelo Williams. Michael Sam has even united Richie Incognito and his alleged bullying victim Jonathan Martin in solidarity. But this is not a “player’s league” and players will not have the last say on Michael Sam’s future prospects.

The true question comes in the next couple of months. For years, NFL owners have operated on a system of benign neglect when it comes to their league’s homophobia, no matter the effect on their own loved ones. The greater good has always been the image of “the Shield” and the revenue streams for which it stands. Now they are being pushed by one brave college All-American to stand for something more profound than themselves: the idea that the league is truly for everyone and merit matters more than prejudice. We will find out on draft day.