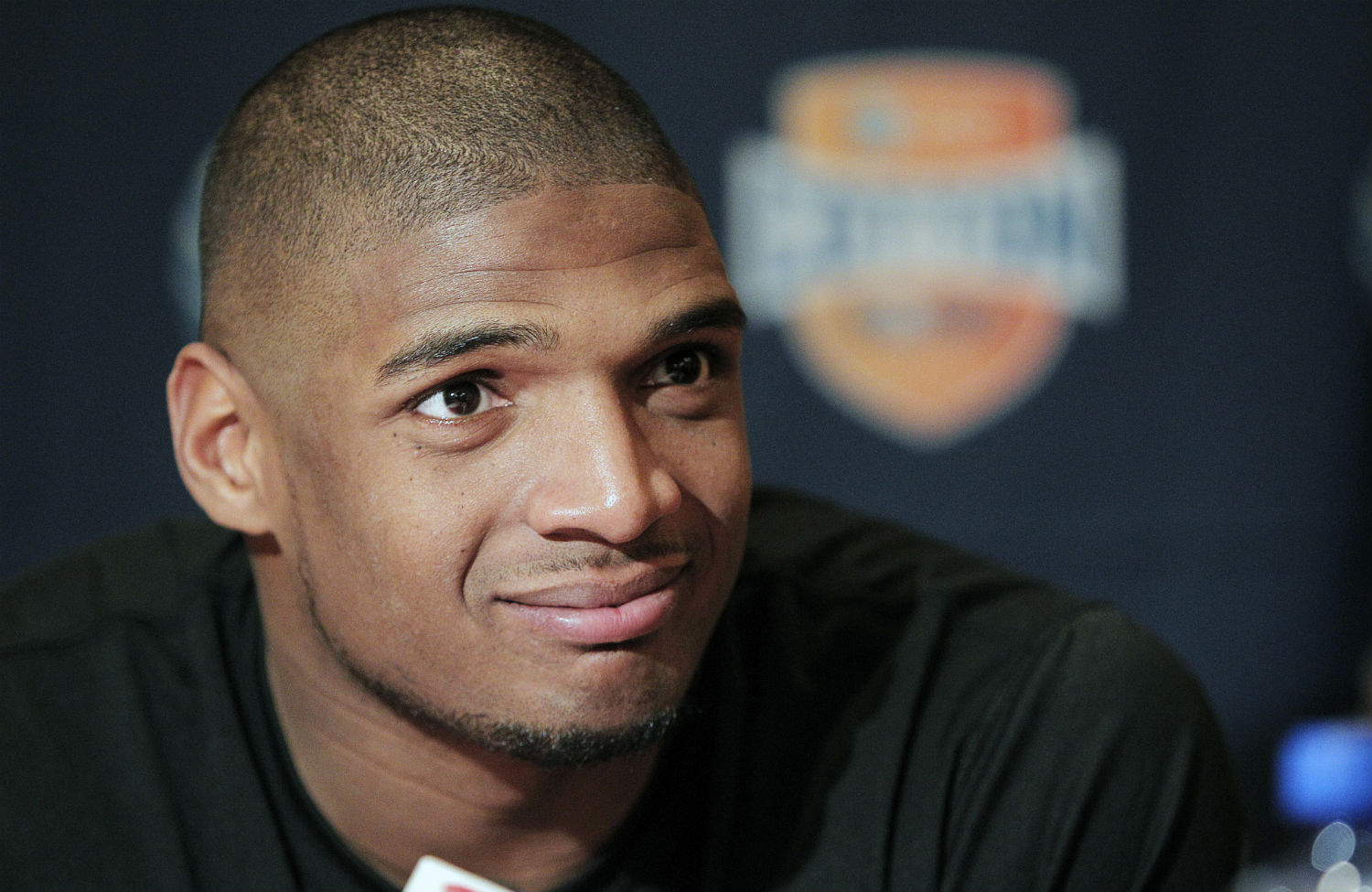 The best Twitter joke this year was W. Kamau Bell trying to start the hashtag #letshaveanuanceddiscussion. Having a nuanced discussion, one tweet at a time, is only slightly easier than being that damn camel trying to make it through the eye of a needle. Today, as the last rounds of the NFL draft played out on multiple television channels and the names of players scrolled across the screen, nuance was the last thing many of us wanted to exercise. Michael Sam, the Southeastern Conference Defensive Player of the Year who told the world he was gay last February, was going undrafted, eventually picked 249th in the seventh and last round by the St. Louis Rams. This in and of itself was history, and not only because Sam was drafted. No SEC DPOY had ever gone that long before being selected. In fact, no SEC DPOY in the last ten years had even lasted past the second round.

The reasons for this are on one level complicated. Michael Sam had a terrible NFL combine. He is a “tweener” neither big enough to play defensive line nor quick enough to be an every-down linebacker. He projected even before he “came out” as a mid-round pick. All of that being said, Michael Sam fell down draftboards, costing him hundreds of thousands of dollars, because of the slow steady drip of groupthink that became a flood and took over the process. NFL “draft experts” prepared the public to not expect any history this weekend, emphasizing that his sexuality had nothing to do with it.

But if Michael Sam’s sexuality’s being an inhibitor to his draft status is not your starting point for understanding all of this, I believe you’re lost without a compass. This is not to argue that all general managers in the NFL are homophobic. It’s not about what kinds of prejudice lurks in the hearts of individual executives. It’s about a systemic problem in an NFL that loathes independent thinkers, fears political controversy and hates “distractions.”

The NFL's homophobia is in an institution that equates being gay with being “controversial” or “political,” not realizing that this is their problem, not Michael Sam’s. This is the league imbibing and regurgitating the same backward logic that keeps people in the closet, scared to tell their family and friends who they are and doing horrible damage to themselves and the people close to them. This is why we can talk until the cows come home about whether Michael Sam is a “tweener” as a player, his poor combine and all the rest of it but it doesn’t get at the root of the issue. This is why we can praise NFL Commissioner Roger Goodell—yes, Roger Goodell—for being out front in supporting and welcoming to Sam when he came out, but we also need to understand what happened and why this groupthink about Sam took root.

As sportswriter Howard Bryant said, Michael Sam is threatening to the institutional biases that exist in the league precisely because he was brave enough to try and control his own narrative. For a league built on idealized notions of machismo and toughness, for a league that speaks in military jargon like they would’ve been the first one to storm the beaches of Normandy if given half the chance, they were a profile in cowardice this weekend. They were scared. It’s the same fear that you see when Goodell announces that they want to police and punish players for saying n____, but are scared to do anything but continue to promote a racial slur as the name of one of its teams. It’s the same fear you see when they aggressively promote tackle football for kids—with ads particularly aimed at moms—during the Super Bowl while their own data comes in at a taxi-cab meter pace about how playing tackle can cause permanent brain injury in children. It’s the same fear you see when they suspend one of their best players for smoking weed. What NFL bosses want, need and crave above all else, is control. Michael Sam represented a loss of that control because he dared—I will say it again—to try and control his own narrative. That is the NFL’s problem, not Michael Sam’s. It also has nothing to do with his forty time at the combine. And that, in my view, it is the starting point for understanding why Michael Sam lasted until pick number 249. All praise to Jeff Fisher and the Rams for stepping up to the NFL's risk-averse culture and not letting this young man suffer the ritual humiliation of going undrafted under the brightest possible spotlight. All praise to Michael Sam for his bravery and selfassurance to deliver the kiss heard 'round the sports world. All praise for Sam's righteous anger at having slipped down draftboards, tweeting out, "Michael Sam is pissed off for greatness!" But the NFL has issues, and they were on full display on Saturday.